I know this is not Victoria Falls. I've been lost since I left home. I'll just sink into the comfortable arms of Wilderness Safaris  and let them take care of where I should be when.
Also I want to thank Bert at Fish Eagle Safaris  for getting this trip arranged for me.


Sitting here after lunch of chicken kajine (kajine spices, not Tajine style) and slaw and tossed salad. With Iced tea and lemonade. As my guide says "Eating safari") 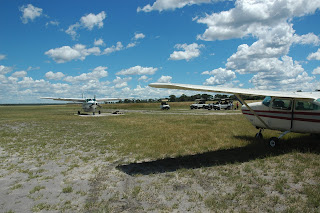 Yesterday I got to the Johannesburg airport and caught the jet to Victoria Falls in Zimbabwe. I was expecting to find myself in Zaire. Whoops! So much for my map reading skills. After the long wait to the immigration/visa counter (it could have been longer if I hadn't cut in line (inadvertently - REALLY!!) in front of the large tour group. Then to the leetle airplane. A Cessna 187 big enough for 4 people with the feel of a small Fiat. The interior was a little worse for wear than I would have preferred but it was serviceable enough (it got me here didn't it?). The flight was about an hour long and miles and miles of very little except grassland and trees. There was the occasional sign of civilization but mostly it was just land devoid of human habitation. Occasionally off in the distance I could see the infrequent landing strip. I remember reading some pilot information that said for pilots to be aware of possible landing areas in case of emergency. And flying in private aircraft in the Puget Sound area there is always a farmer's field someplace in sight. Not in Zimbabwe. No sir-ee. If the engine dies you are a long long way from anyplace and not much that looked to me like a place I'd like to try to land on.

A couple bumps along the way and a little rain, but except for my over active imagination nothing worse than a ride at Disneyland. I watched the miles count down on the pilot’s GPS and when it read zero that was exactly what I saw for a landing area. Zero. There was the big cleared area but nothing that looked like anything resembling a landing strip. The plane banked over and I saw my first piece of actual wildlife. There was a sole elephant walking across this cleared area where I assumed we were going to crash. We glided down and got very close to the ground and the stall warning started to scream and before I had a chance to do the same the wheels touched down and we rattled to a stop. We had arrived.

A safari truck was waiting there for me and after greetings and shakes I was welcomed to Davison Camp by Godfrey the man who would guide me for at least the next two days. Coke, Fanta, Schwepps lemon and water were waiting in the cooler and after my last cigarette we departed for the camp. I thought w were at the camp. Well sort of. We were only 10 miles away from it.

Over the next ten miles we passed a herd of elephants. Waved at some zebras. Were shadowed by Carmine bee eater's (birds with long tails) A Harrier (not the vertical takeoff jet) and a lilac roller. Godfrey would stop and wait for me to get the photos I wanted and then wait some more. Finally he would say "You want to go now?” I came to realize that until you told him to go we were going to sit there as long as I liked. 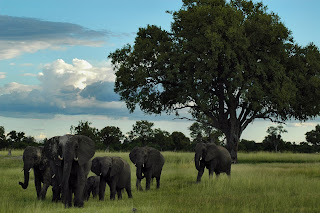 We drove into the camp and three people were awaiting us. Andrias, Bell and Avias with damp towels and handshakes to welcome me. My bags disappeared and with a glass of iced tea I sat down with Avias for a camp introduction. Wake-up 530. Breakfast 6 am. Safari drive until 11. Lunch. Siesta until 330 pm, safari drive till seven, dinner at eight. Christ, Basic training sounded less structured. After dark no walking about the camp without an armed escort. If you feel or experience danger blow the air horn in the room and turn on your lights. Sign this liability waiver please. About now I'm wondering about a nice drive back to the grass field and a nice Cessna back to the Marriott.

My tent was/is everything I had expected from the brochures. Spotless. Twin beds with towels wrapped with grass raffia (sp?) and a leaf stuck in the twine. More soaps and shampoos than at a Holiday Inn and sheets whiter than a cross burning in Alabama. (O.K. So kill me for being politically incorrect) three sides of the "tent" were floor to ceiling window screen with a door that latched and was lockable with a slide. Hot water in the sink and shower. A flush toilet and 4 weights and densities of pillows to choose from. If upscale camping is called Glamping, this must be Lux-amping. It is luxury camping to end all camping. There are camps that are called Premiere camps. I cannot imagine how much more luxurious those camps could be.

There is absolutely nothing that the staff won't do for you. Well they would not wash your ladies dainties ('smalls' in the local vernacular). The staff is so attentive that I kind of hate to ask for anything because they had already done so much already. BUT, I'm learning. By the time I get home - watch out servers and baristas - the bitch is going to be in town.

I got settled and Godfrey and I took to the road. The other 2 couples in camp had already left on their evening safari. Road as I am sure you realize is a total misnomer. There are twin tire tracks in the sand or grass interspersed with large puddles that sometimes come up to the bottom of the truck. We drove and drove doing the Doctor Doolittle (not speaking to the animals mind you) thing. Zebras, Two types of hornbills. A couple eagles (one Fish Eagle - a spitting image to our Bald eagle) and then briefly - all too briefly in the dark a male lion. I didn't get a picture perfect look at him but he was absolutely huge. I'm sure the same size as the ones we have all seen in zoos, but something about not having bars or a cage between you and this wildest of wild beasts really brings home how large they really are. I hope it is a memory I will carry with me for a long long time.

There are a dozen or so animals that we saw along the way but they are lost in the 'first day of vacation' fog of my memory. Then the previous day's 30 hour length, the previous night's 3 or four hours of sleep and a full day of traveling and helping fly the Cessna (mentally that is) caught up with me. Like a speed junkie without money I crashed. I mean I crashed badly. We got back to the camp and there was the staff with damp towels and big smiles and dinner. I begged off said I was going to bed. Give me a roll and I'll be good. Well there was to be none of that. Dinner or at least something would be brought to my tent. Fine. With flashlights and gun bearer I was escorted to my tent. I flopped down on the divan to wait for dinner. I was awakened by Avias who had a tray of bottled water, a bowl of tomato soup an apple and a banana. I inhaled the soup and jumped into bed. My nice comfy bed. The one that was Goldilocks comfortable - juuust right. I woke up in the dark to some sort of noise. Maybe rain, maybe a critter who knows it was just a passing moment of consciousness. Then as it was just starting to get light, maybe 5 am I heard talking outside my tent. As my brain fog lifted I realized it wasn't talking but the baboons were out there chattering. Their communication patterns had a distinct almost human speech pattern to it. I listened to them for a while and decided to look out my tent's flap and realized it was getting daylight. Might as well get up.

No alarm clock. No watch. I could have turned on my GPS I suppose and found out what time it was. But I didn't. I tried to buy one at SeaTac and failed. I got out my coffee makin's and found out that the adapter I have for my US 110 v. plug to the two pronged European plug is not compatible with the three sideways pronged plugs in Zimbabwe. Cold coffee it was. Better than no coffee though. As I was washing my face the wake up caller arrived and the day officially started.

Breakfast was offered. Toast was accepted, with hot coffee. Eggs were offered and declined. Obligatory nods and hellos to the other guests who had bonded with the other couple, so the social part of the morning was mercifully short. Godfrey and I got out of camp and went on the morning's drive. Wildebeest, ostriches, giraffes, jackals, warthogs, one glimpse of a lioness, vultures galore and a family of hippos were on the menu for that drive.

We got back to the camp about 1130 and lunch was served and I got the impression that it was not optional or come when you wish. It was now - with a small concession for me to go back to my tent to pee and get my net book. By this time the previous couples had left and a new couple had arrived. Mr. and Mrs. middle America from Wisconsin. Nice people. He in construction supply and she a retired school teacher. What you see is what you get with them.

Now some down time and it looks like I am now up to date on this tome as I sit here in the library open to the view of the watering hole and watch the zebras, kudu and elephants pass in revue.
Posted by Dorothy Macaw at 11:33 AM