Off to Botswana with the eskimos

At the crack of 8:05 we boarded the bus and went to the airport where I and the rest of the ducklings were handed off to another mother duck and we waddled through immigration and the exit formalities.  Our Cessna 208B picked up all nine of us and popped into the sky for 15 minutes before landing in Botswana.  Where another hen guided us through those bureaucratic mazes. I generally give a shoulder patch to the first officer I encounter my Mr. Officious Immigration officer who was a paper work micro manager did not get a patch. I might have given him one, but would have had to wipe my butt with it first and I didn’t want to disrobe in the immigration office then.

Back on the 208 with one additional passenger a VERY tall black man who was going to Maun to visit his wife who was a teacher there. We slipped into the sky and in another 45 minutes landed on a grass strip in the north eastern Okavango delta. Our nine minus the one split into three groups and like the Blue Angels peeled off into separate directions.

A mother - daughter team from Anchorage were going to the same camp as I was. So we are now a team and I am the one who get's voted off the island first. Bobby is our guide and we shall see how he handles us since we are all going to be together for the next 3 days. My first impression was not total excitement. After Godfrey and especially Sam he has some very big shoes to fill. Besides a 17 year old girl is a whole hell of a lot more interesting than a 63 year old crone. Even though we know that is totally wrong.

The drive in was a great game drive. Big male Kudu's, a couple elephants and ... and... A hippo out of the water in the high grass. Now that was spectacular.

Duma Tau is a bush camp set on the edge of a marsh. Basically the same set up as Davison only on stilts. 10 tents, a real bar and the room a little more luxe than Davison. I'm not sure where I'll fit in the social hierarchy. A little more crowded that at Davison where it was just me and the Wisconsinites. We shall see. It's now a few minutes past 2 and tea at three thirty before the game drive with Bobby and the Eskimo’s.

Forget about being voted off the island, I'm not even ON the island. The two Eskimos are in their own little world, whispering between themselves and totally ignoring me. Bobby thinks that the only people in his Land Rover are sitting right behind him. He might glance in my direction on the rare occasion, but all conversation is directed toward Sharon and Robin. I will see how things shake out as the next couple days evolve.

When Bobby talks there is no room for anyone else to talk. Instead on pausing for a question he just steamrolls over you and keeps on going. It is like he is talking from a script and the whole spiel must be told in the correct order without interruption. Sharon won't shut the f*ck up. She doesn't seem uneducated but her questions are on the "why is the sky blue" inane. Robin is 16 and best secure with her mom so she gets a pass as far as the conversation.

We drove around a bit seeing the hippos and a couple other animals. Unexpectedly at the far end of a pond Bobby spotted a pride of lions. Since Wilderness Safari leases this land they are able to drive off the road unlike the national parks I was in in Zimbabwe and Zambia. We drove around the lake and pulled right up to the lions. A big fat and I do mean fat male Lion was laying off to the side. Bobby said the lionesses had made a kill yesterday and he had taken it away from them for himself. He was so stuffed he could hardly roll over. He looked like grandpa after Thanksgiving dinner. He did manage somehow to roll on to his back and air his balls and belly off. 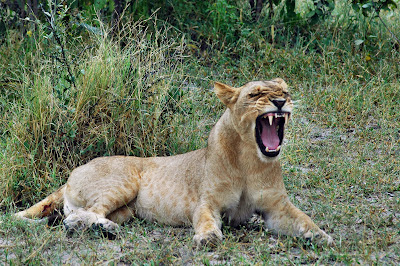 There were at least 6 lioness' and several teen aged lions in the group. I'm sure there were others but they were off in the bush and we didn't see them. Then one by one the females got up and started strolling into the bush and trees. Bobby said it was hunting time and time to go look for dinner for mom and the kids. After everyone left papa lion belly got up and moved off in the same direction. Bobby talked on the radio to another vehicle and we tried to follow them through the bush. This isn't any follow the tracks type of off roading this is drive over the little trees type of off roading. We bounced and bumped thinning out some of the trees for 15 or 20 minutes. Never did find the lions. They were magically transported into the ether.

We drove around some more and I saw a raptor and pointed to it, but Bobby was in motor mouth mode (nothing to do with the game drive) and so the bird flew on and on even as I was pointing at it. Sharon wanted to take pictures of trees with personality. So we searched for trees.  I do hope she tips well. Because she is going to have to make up for my disappointment.

We got into camp shortly after dark and were escorted to our individual tents to freshen up before dinner. A huge 30 foot table was set with plates, flatware, and wine glasses with napkin storks in them. A mess hall only with better accoutrements (sp?) and food. I sat next to Jim who is maybe 80 and spry. It was a good conversation and dinner.

I hit the sheets about 10:30 after a shower and slept hard until 4 am when I looked up and saw the sunrise, that turned out to be the moon rise -- again. Since wake up was at 5 am I made some coffee and then laid in bed and listened to the hippos grunt and to something really big stomp around in the brush next to me tent.

The morning's gossip of the camp was that one of the staff saw a leopard in camp last night. Stop and freeze. Might make it so the leopard doesn't have to work so hard to eat you. After breakfast we split for points northeast. Not alot changed as far as the conversation or the guiding, Bobby did point out some raptors but they were so far away that even with 300mm in my camera they were still just dark lumps on a tree. The wild dogs were seen recently to the northeast. They are endangered and so that is as good a reason to drive to see them. The radio crackled and in a U turn we were going back the way we came. LEOPARD! We flew down the dirt track and found the other vehicle. The leopard was standing already on the side of a termite hill looking down at a warthog den. There was a female warthog and 2 piglets (hogletts?) in the den and since mom was kinda big and had huge tusks, the leopard was waiting for mom to lead her brood out for their morning constitutional. We sat there for maybe two or three hours watching and waiting along with the leopard. Every now and then the sow would come out check out the surroundings and then return to her hole. Probably this happened half a dozen times and she never did lead her kids down the green mile. Finally we and the leopard both tired of the wait and the leopard turned and went to the high grass and tree shade to flop down. The cat was so used to the vehicles that one of the Rovers pulled up and the cat's tale was literally a foot from the front tire. I had to take a picture of it, just to show. There were times that the clicks of shutters sounded like the red carpet at the Oscars. We all got some really good shots. I must have shot 50 myself.

Back at camp, lunch, this and I think I'm going to take a nap.

Posted by Dorothy Macaw at 8:10 PM