Well poop - no, double poop. I shot over 300 photos with the wrong setting on my camera and nearly everything came out under exposed. I hope that Photoshop can bump up the brightness and tweak the contrast once I get home. Because there are two or three shots that might just be the ones to really say something about the trip. I’m glad I caught it at this point and not another 2 days from now. Here's hoping.

Now that lunch is done after breakfast and then a snack on the trail my New Year's resolution is officially a thing of the past. I guess I'll be able to put off my bikini shopping for another 6 months. 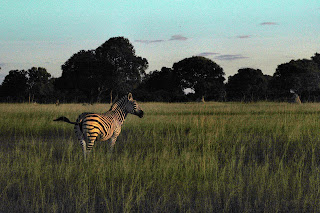 After lunch and a rest we hit the trail once again around 3:30. The couple from Wisconsin and I along with the same driver, Godfrey. We trailed elephants and zebra and it was a near replay of the previous evening's travels. It was funny to hear the same questions that I thought were so clever and uniquely insightful be asked by the new couple. Sounds to me like the guides get the same questions over and over and over ad nauseaum. I really don't have an awfully lot to say about the drive other than I shot a bazillion pictures and one in particular was going to be my ionic shot of the elephants. The full moon was rising and I had a close up of an elephant's head with the rising moon and trees in the background. Maybe I'll get lucky and get a similar photo tonight now that I have my camera's settings in the correct mode.

We got back to the camp and were again met by the staff with wash cloths and smiles. Then we were informed that it was dinner time. Not quite but almost a "You are eating NOW!" Neither I nor Mrs. Middle America even had a chance to go potty before dinner. Dinner was presented much the same way that it is presented on the food network only it was presented by the camp hostess and not the chef. "For tonight’s supper you will be presented with three courses. The main course is ..." Well last night we had lamb tajine, rice and a couple salads. Lead off by a small omelet and dessert was a flan with caramel sauce. Two types of wine were offered as well as the regular array of soft drinks and coffee. Oh! I forgot. When we got back from the drive there was a glass of sherry offered as soon as we entered the dining area. This is a standard came. What more can a "Premiere" camp offer?

At the table the camp manager and our guide sat with us and kept the conversation going. Explaining things. Touching briefly on politics and then telling a 'war story' or two about guests behaving badly.

After dinner we were escorted to our tents and bid a good night. I found my previous day's clothes washed and folded on my bed. I took a shower, dried my hair and hit the sheets.

I awoke to the sound of the train passing by and then listened to the birds for a while as it slowly became light. The wakeup call came and the day started again. Breakfast and coffee with Bell a member of the staff and the Mid-Americans. And back out to the field for the morning. I know this is a very boring thing to read, because writing it is causing me to nod off. I told someone once that the best stories are where something bad occurs and you see how the author handles it. Well unfortunately except for the exposure problem this has been totally without any drama. Not my normal vacation. Maybe an elephant will charge us later or a leopard will leap on Mr. Mid-America. Now that would make a story. Maybe I'll be able to recover those photos and they will be able to tell the story of the past few days.

Now back after the morning's drive to fried Tilapia, potatoes, salad and mango iced tea.

Posted by Dorothy Macaw at 2:35 PM