(I think that translates to a place in the edge of nowhere. Tomorrow we delve in to deepest part of the middle of nowhere)

450 km ( About 270 miles) over mostly paved roads to get here from Addis. Left about 8:30 and got here around 4:30. Had to shop for a hotel. The first one was kinda nice, but over priced. This one is a flea bag (I hope not literally) but really cheap. Under $20. A place to sleep and hopefully shower, if the water comes on sometime.

The first part of the trip was wide open well paved roads. I kept fantasizing driving a hot car, like a corvette or Porsche on them. They were virtually empty. I doubt we passed 50 vehicles coming to us or away in 2 hours. We were cruising at a comfortable 55 mph the entire time. Then the construction began. One mile of pavement, 2 miles of gravel. Sometimes the gravel was a better surface than the macadam. The roads were jammed. Not many cars, but cows, goats, small children, school kids, women carrying loads, men just wandering. One town we passed through had their weekly market. The line of people and goods reminded me of the photo I've seen of war refugees. Metal wheeled carts loaded tallre than a man pulled by a donkey or maybe a cow. Then individual people with packages of who knows what on their heads, or perhaps pushing a wheelbarrow contraption made out of lumber and rolling on the equevelant of a mettal skateboard wheel. 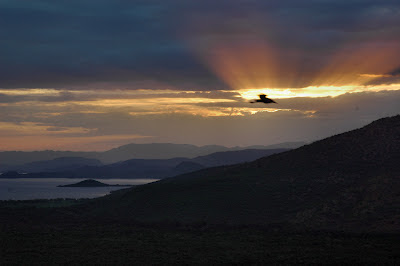 The scenery was really varied. Mountains, savanahas, banana plantations small subsitance farm. I/we passed through 2 good sized towns and a multitude of villages. the houses ran the gamit from near palaces, to mud huts, one cave and the ubiquitous Tina Turner thatch roofed round huts. There were monkeys, one big primate ( Baboon ? It had a long tail with an pom-pom on the tip. Raptors slowly circling on the thermals and a flock of cranes or storks. All at the same time as we dodged kids, bikes, and tuk-tuks.


Now to the tour books stuff. Addis sits at 7566 feet, at least that is what the screen on the plane said when we landed. My hotel room was on the 6th floor, which is actually the 7th floor since the ground flloor doesn't count. I always walked down the stairs and once walked up. Once was enough.  I was out of breath at five and was starting to get tunnel vision when I his six. No wonder they have so many great Olympic runners. Emperor Halai Salassi died in 1974 (??) the was really old and on his way out anyway, but the strong rumor exists that he was suffocated with a pillow. I know what really happened. They forced him to go up 2 flights of stairs and that was enough to fininsh off the old guy. 7566 feet. Does that mean if you were born in Addis that your parents were members of the "Mile High" club or does it only count if you are in an aircraft? and does the aircraft that to be aloft?

For you guys interested in such things. I can see no reason for there to be any plastic surgeons in all of Ethiopia. Every women's skin is absolutely flawless and they all seem to either have great boobs or else the padded bra concession is where we should invest.

I have decided that Addis and Ethiopia in general to be the Seattle of the third world. The streets and totally clean. Not  the plastic bag farms and plastic bottle oceans I am used to seeing on my travels. Maybe it is an economic thing where the general populace can't affor the luxury of pre-packaged goods or maybe they are really proud of their country. The cars all make as many lanes as cars or trucks will fit abreast regargless of the lines on the pavement. But no horn blowing unless it is to warn someone. none of this angry laying on the horn the moment the light turns green and the car in front  hasb't burned rubber. At the traffic circles t is orderly and cars coming from the right are yielded to. Just like Seattle.

The Ehiopian church is having their equivalent of lent right now. The Moslem's have 28 days of Ramadan. The Roman Catholics have 40 days of Lent. The Ethiopian church has 54 days of "fasting". You gotta be  a true believer for that much penance. Oh !! and by the way. I am officially 7 years younger in Ethiopia. Sometihng about the difference between the Julian (ours) and the Gregorian calendar. They also have 13 months, but one is only a couple ( 5 maybe) days long.

Yesterday eve I wrote long hand in my journal and must have used "Fuck-a-duck!!" five times in one page. One duck rapeing was when the day manager or the resturant in the hotel saked me to send him a laptop when I got home. We talked between breakfast bites in the morning and passed the "what did you see/do today" banter. Then he asked me for the laptop so he can study socialology and do good works. F-a-D !!

The second fowl intercourse happened over the travel agent. We spent a good hour in the afternoon going over what I wanted to do and what my time frame was. Then at 6pm he tells that instead of having a car waiting for me when I fly into Lalibea so I can save a day driving. I will now have to wait a day and a half for the car to drive up from Addis. This is after it was all paid for. F-a-D !! So I said forget it. How about we drive south instead and I fly back to Addis to save a day on the road. So he offers me the money back that I gave him for the plan from Addis to Lalibea, evcept it is $40 short. He tries to flim-flam me with it is cheaper to fly to Lalibea than the first quote to Gonder. Still the $40 is missing. I pull out this calculator and start punching in numbers to make sure me math is correct and it comes out to the nearest dollar. I give him the calculator and give him the numbers I used, doubly checking the match his. Finally he agrees and tell me. Oh, when you were rough figuring the cost you were using 16 Bir to the dollar. The official rate is 16.7 Bir to the dollar. I thought you wantede me to keep the .7 Bir on the $900 you gave me. Do you want it too? FUCK A DUCK !!

On that sore duck's ass, I'm going to close.
Posted by Dorothy Macaw at 4:58 PM