Tuesday - The Ides of March

How many times have I written that while on a trip ? At least half a dozen.
Back in Arba Minch, different hotel this time. Nicer room, great courtyard the view is lacking though. I'm not certain if the trade off is even or not. The view there is spectacular, this place has hot water .... when they have water. The town seems to be out of water so I guess it's a choice view or luxury, because they are both about the same price. $19 here vs. $15 there. It will be fine for 18 hours before Addis tomorrow. EXCEPT for the fucking nearby church. Some guy is yowling over loudspeakers and it is getting a bit bothersome. 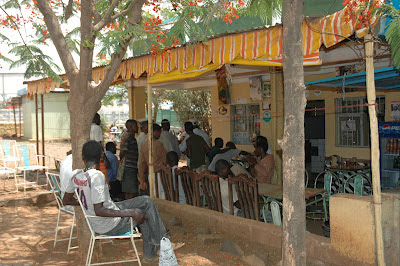 The roads back there were the usual mix. Some good, some really good and some not roads. But I have said about all OK not quite finished about roads. We were coming down this hill to cross a bridge and ran into a Cow Jam. They owned the bridge at that moment so we just had to wait before bossy sauntered her bony asses across MY bridge. I asked driver if the farmers thought they or the cars own the road. He said they are equals. I guess if you flatten a goat you suddenly own a goat and it aint cheap. 6 to 700 Bir about $40. Considering the wage in Jinka was 400 Bir for a month for the waiter at the hotel, goats are gold. We did almost mash a Paris Hilton size dog I didn't ask how that much would have been. Maybe the owner would have thanked us.

We passed huge domes of cotton. maybe 40 feet tall and the same around covered by yellow the equivalent of blue tarps. That surprised me. One minute we were in the cool highlands and 5 minutes later down in the flats. Up down up down. Cool and comfy then roll down the windows hot. We did turn the air conditioning on for a little bit though. The first time for the trip. We were following a large truck and couldn't find a safe place to force him off the road. He was raising such a cloud of dust that we had to roll the windows up to keep from choking and in a couple minutes were on the verge of suffocation from the heat. Heck I never even thought we might have had air-con.

I wish I could remember if I ever knew the name of the statue in Brussels Belgium (??) of the little boy urinating. Well we passed him today only he is black. Standing there hands on hips totally naked  Facing traffic as he stood on a bluff and whizzed as the cars whizzed past.

Besides the Wizard or Ethiopia we passed another funeral procession. A very thin body on a ladder like bier carried by 4 men and in this case two people following. On the previous two we've past there has been a handful and none following. 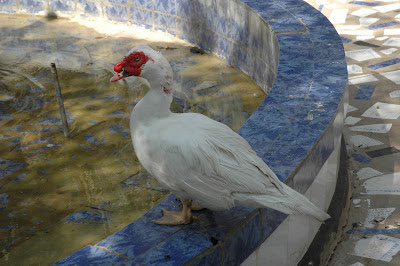 Then there were the kids. As you pass by sometimes the boys on the side of the road will leap to their feet and do the Ethiopian version of the Funky Chicken hoping for something from the cars. They are even happy with an empty liter water bottle. Not much goes to waste here. Today's children were out standing. Not your run of the mill boogaloo but full fledged Cirque Du Soleil. One boy was skipping rope only he was on his hands and his feet was the rope. He would have made Olga Corbet look like a rank beginner. Half a block up the street were the three or four boys doing what looked to me to be the YMCA .... while standing on their heads. If I would have had one for them I would have tried to pay them with an empty water bottle as a thank you.

Most of the bridges, where there are bridges are pretty boring. Occasionally we would cross one over a rocky canyon and driver would ask me if I wanted a photo. Sometimes yes, sometimes not. There was a "Yes" on the way. Well now I learned in case of Zombie attack I'll be the first eaten.  One kid, two kids, three kids - SWARM !! I was surrounded by them. Pulling on my clothes. Grabbing my hand and then the other hand. Pulling, pulling down to their level. I was about encased in children when the driver came to my rescue and beat them off me with a few choice words. There were a few stragglers holding on and still pursuing but enough fell back that it allowed me time to escape to the safety of the Landcruiser's solid hollow metal door.

That was before noon.
Posted by Dorothy Macaw at 8:01 PM