Well I guess I'll start with the sour and with luck end on the sweet. One of those do you want the good news or the bad news first ?

The local guide.here in Turmi. Yesterday for an hour's time walking me through a Hamer village he charged 150 Bir. His guidemanship left a lot to be desired. He told me the absolute minimum that he was required to tell and maybe not that much. He was forever wandering off to talk to the people. Today we went to Omorate a village at the literal end of the road. The entire hour of the trip he didn't say a thing, unless I asked him a specific question. I would get the correct but most minimal answer possible.It was like I was paying him by the word 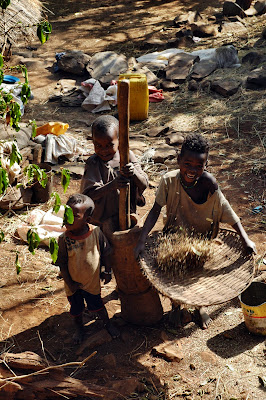 This village was the same as the previous one. "There is a house", "Those are ladies" well you get the idea.By the time we got back to the 4X4 I was steaming, but not terminally -- yet. Then off to the Saturday market. Repeat of the past, except this time he wandered off to find some water. I strolled around, pestering the people with questions I should have directed at him and then went back to the Landcruiser. We (the driver and I) waited and waited. We waited so long that a salesman finally accepted my low ball bid on a trinket. Then we drove around a little looking for him. It must have been half an hour before he strolled up and got in the SUV. When we got back to the town another outing was planned and when he got out I had him come to my window and told him we were done. In my best Donald Trump, I told him hes was fired. What do I owe you. 350 Bir ($20 bucks). I handed him 300 and told him the ride back cost 50. I be very happy he no carry spear, because the daggers from his eyes were menacing enough. He took the 300 and threw it back at me. He has a good arm on him too. Fine ! So now three hours later he comes walking up to me here at the hotel. "You owe me (unintelligible) and 20 for the 2 pictures at Omorade. That is right he did front me 20 Bir, because all I had were 100's. I got change and handed him 30, just to show --I don't know --- no hard feelings --- maybe it was a ""see I'm a bigger person than you". Truth be told that was probably a closer description of my intent. He looked at it and said you owe me another 40. WTF, Over ?!?!? I told him call the police. I'll be happy to explain to them my side. Finally after a few moments of ping pong bickering I took the rest of the Bir and threw it at him. Neener, neener !! I can be as childish as you. He threw a few choice words back at me but were lost in translation. I waved and with the most sarcastic smile and voice said "Have a nice day" Am I proud of myself? In retrospect, No. But it sure felt good at the time.

We return you now to our regularly scheduled programing.

Last night was better than the night before. The bed was cooler, well at least better ventilated. I didn't get all mummy'ed up the the skeeter netting again. One second I was just resting on top of the covers and the next thing I know it is completely black. The porch light was out and the light switch didn't do anything except click. No volts, or amps or watts. Nothing but dark. And I mean dark. So dark that I had to feel for the wall. I can't think of a time were there wasn't at least some civilized ambient light around, except the that time in Bend Oregon's lava tubes. And of course my flashlight was not where I expected it to be in my rat's nest of luggage. I'm doing this by braille at the moment. I did accidentally find my lighter. So like a rock concert goer I go to the toilet and only slightly singed my thumb thanks to my acrylic nails. I wall walked back to bed. You know at three a.m. it is really dark outside and really quiet. I flopped around for the next couple hours and got up at first light.

Had the breakfast of bread and jam and coffee. An egg was offered but I wouldn't know what to do with such luxury right now. The SUV arrived about 8 with the driver and the a fore  mentioned semi-guide. Another hour plus of 45 to 50 mph dirt roads and we got to where the road goes no more. Along the way we passed some small mammals, some large termites, a pair of vultures and only hit one of the covey of ginnea hen. The first animal we saw was about the size of a large jackrabbit, but built like an antelope. I thought I knew what it was but asked the guide and he confirmed for me that it was indeed a Dik-Dik. I hate to sound the obvious but I always thought they were bigger. Oh, well sch is life and fantasy.

The next thing I saw of interest to me were these things that looked like limbless trees  dirt colored and between 10 and 30 feet tall. It kind of reminded me of a forest after a fire, except brown and not blackened. I asked the guide and he confirmed they were termite mounds. Now they were taller than I expected, not quite as much girth as I though they would be. Ya, can't have everything I suppose.

At the end of the road we had to stop because the river was in the way of the road. The banks were pretty steep and loose sand like riverbanks are known to have. With a little slipping and a couple "Oh, shits" we made to to riverside. The we turned out backs on the perfectly good aluminum, surrey topped, outboard motor boats and walked 500 feet t the hollowed out logs that were to take us across the river while some pre-teen stood n the back and pushed a stick (Not an oar. Not a board. A flipping tree limb). I think the proper word for these is "dugout". I had just laced up my hiking boots to the top to traverse the river bank and immediately regretted that hasty decision. "Now when this tree rolls over in the middle of the river am I going to be able to dog paddle with these boots on long enough to reach shore or to get back to the log and hold on?". I shoe horned my ass into the boat  and sat as low as possible. To hell with having a dry pants seat. I'll risk a few percentage points of survival over a few of comfort or embarrassment. Since I'm writing this you know the trip too and fro was successful, but sometime a good imagination works against you. 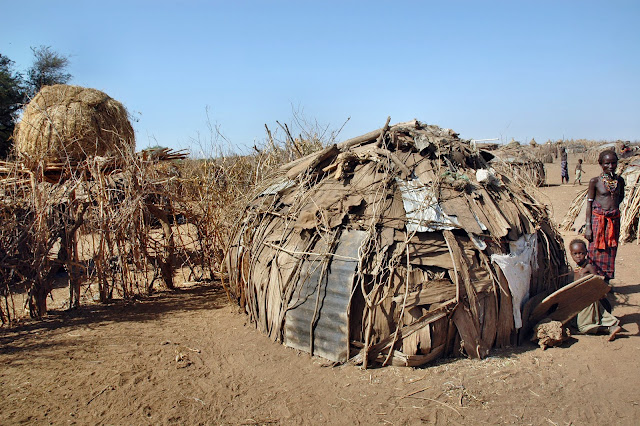 The village was a variation of the last village's theme. Different ethnic group. The houses were more bent branches covered with "whatever". Paper, plastic, hides, flattened cans - whatever. They adorned themselves the same way. One girl has a woven halo with where the beads would hang. She had bottle caps. One of the mature women (I quit using the word older once I hit 60) had a silver bottle cap opener in her hair. There was the expected pleas for photos, because each photo was 2 Bir in their pockets - no pockets but you know ... The Hammer people from the previous day had wiped me out on small change all I had were 100's so the guide arranged 2 groups and paid the 20 for me.

I hate to be culturally insensitive but I'm going to sound like Karl Pilkington on An Idiot Abroad (If you haven't seen it and you like Ricky Gervais give a show a watch. It is really funny) but when it comes to these villages "Ya seen one, ya seen 'em all" Subtle differences but generally people living on the ground in hovels smaller than some dog houses. That statement is going to send me straight to "Politically correct tourist Hell". Well at least Karl will be there too.

The ride back to town we stopped and tried to get a picture of a small gazelle or antelope, but it was skittish and my telephoto could have used a few more millimeters. Then we stopped at the tallest termite mound and got a picture of it with and without guide. Guide for size perspective.

Next stop was the Saturday market. Not in town like it should have been but 45 minutes to an hour in the complete opposite direction from town. Over more sand tracks and riverbed (dry) crossings. The first third were vendors selling tourist geegaws and further on the real market. Raw coffee, sorghum, chickens, green leafy things and lots more, but since I had lost my guide by this time I can't tell you what I saw. Maybe the photos will tell more.

On the way out I stopped and asked what one of the geegaws was and was told it was the first wife's necklace. It looked like an Ankh without the cross at the bottom. I asked the price for one covered in small shells and some guy said it was just for tourists "Come I show you a real one". Three or four blankets further on was a real one. It didn't look all that much different from the tourist one, but what do I know? The price was 1000 Bir ($60 approx). Waaayyyy too much. "How much you offer". I said 150 and that was very close to my limit for a geegaw even if it was The Real Thing. The vendor blew that off with a laugh. So we smiled at each other and I went back to the Landcruiser. While I was there a guy magically appeared with a First Wife's collar. Tourist quality. How much? 200. All I have is 100. What about 120 ? I told you all I have is 100's. Ok, sold. How much is it sold for? 120. I don't have 120. But I paid 100 for this. Sorry my price is a 100 for it. Honestly if I had been able to dig upn another 20 I would have given it to him. I searched my carry on two or three times looking a few extra Bir and found some loose coins in an overlooked pocket. Voila! I was the proud owner of a First Wife's collar (tourist quality of course)

We were supposed to go watch bull jumping where the young men run and jump atop a bull and then jump on the backs of the bulls (maybe 6) in a row. Turn around and jump back. If successful they get their choice of fair maidens. The fair maiden have been acting as cheerleaders for this activity by getting caned to the point of bleeding and future scarring. We got to the point where the other tourists were and were informed that it was an hour's walk up the riverbed to the ceremonial place. I opted out on this experience on several levels, but the deciding point was it was just too damn hot to get tramping in the desert for an hour each way. Besides my anti malarial said something about sun sensitivity and I already was close to the color of an overdone lobster. So, now I had time to write this instead of calling for a MedEvac.
Posted by Dorothy Macaw at 2:51 PM