Ethiopia 2011 - No electricty, but at least there's khat

What an expensive town and that isn't the hotel. That is the entrance
to the churches and the guide. $20 to look at rocks and $30 to be told
what kind of rocks I'm seeing. as an added bonus there is no electricity
in the town. I knew the infrastructure of Ethiopia was not
first world I didn't expect it to be whatever comes after third world.
Primitive is maybe the word.

At least the hotel takes Visa.

The churches are interesting, but difficult to photograph. They sit at
the bottom of a carved out 11 meter ditch and  there is no way to get
back far enough to get them in the shot. I've talked to myself about
getting a wide angle lens, this may be the catalist  for that purchase.

King Lalibea was one of eleven kings of the area. Four of whom were
priest kings. His granddad, his uncle, him and his cousin. Somebody had
the nerve to poison him and he went into a coma. Upon recovering from
the coma he had a vision where he went to Heaven and God told him to
get to cutting rock and build him some churches. There are five of six
churches depending if you count the one that is inside the other. One
really big 35 feet tall and about 100 long. Their Jesus mythology is
quite a bit different that the one that I know. like 120 people who
were followers, a handful of virgins, the twelve that we know and of
course the leader of the pack. So these are represented by the number
of pillars in the big church. Men's entrances and women's entrances and
one for mixed, including the priesthood. In mosques it is a sign of
respect to have your head covered, these is is opposite. My head is
about to explode from information overload. I think when I look at the
photos much of it will come back to me. This church was the second
Lalibea made. 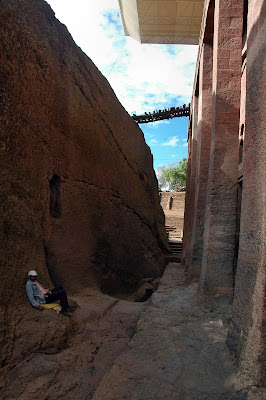 The first church, the prototype is smaller and much more intricate inside. The first one was big, dark and heald up by 33 plain boring pillars. The first one has intricately carved pillars, frescos on the ceiling and over the doorways. Of course this is the church where photography is prohibited. The altar in all the churches is of course covered with a sheet. A really nicely embroidered sheet, but for all intents and purposes a sheet. Shoes are NOT optional in the churches
and they do not have padded carpeting in them . Then entrances to all the churches are all about three or four steps up and the same down, each about 10 inches. Over the years the edges of the steps has been wore round and very very smooth. Not a problem going up. Going down is where a banister would be a nice touch. Maybe it is a test of faith to
go to church. the priests are a bit of a stuck up bunch. Too many tourists? Maybe just elitist wiennies.

We did the northern set of churches this after noon before the place closed for the night. Back at the southern ones tomorrow at 8 am and then some monastaries out of town. If it wasn't in Ethiopia this place would be one of the seven wonders, or at least a World Heritige
location. I was expecting that the roads would be paved with gold to
get here. As it was only about half of today's drive was pavement the
rest was the roads I've endlessly spoken of before. More Alpine and
desert and verdant valley in between. We even got up to abouve the tree
line. Maybe it was just too rocky to set roots. but it was flat covered
in a plant that didn't grow more than 2 or three inches high. The
tgatched huts change style a little as we climbed from round to
rectangular the the rooflines in a squared oval. When we got higher
they were replaced with low mud huts with flat roofs.

We left the hotel in a nice valley and started climbing. No gardrails,
little white and black cement blocks between 6 and 9 inches tall and
six inches square. Behind them was lots and lots of nothing for a long
way down. You could probibly say the entire rosary between the road and
the first bounce. So I kept my eyes on the road to help scream at he
first sign of trouble. I did that until we hit the clouds. Then it was
just following the road by luck and braile. At least the oncoming
traffic turned on their flashers so we could see where they were when
we had out headon. But we made it safely back down and to our
destination.

We only stopped one time between 7:30 and arriving at the hotel at
2:30. That was on a turnout view point high above a valley. Nothing but
view, rocks and air. I needed to get rid of the morning's coffee and up
comes one boy, then two and then three. Give me a Bir. Give me a pen.
Give me your shoes. Where in the Hell did they comefrom. There isn't a
house in sight and just thousands of feet of narrow terraced gardens
down as far as the eye can see. So I'm hopping from foot to foot and I
can not shake the entourage. When I was in Luxor Egypt at least the
urchin pests had the good manners to say "Give me a dollar and we go
away." (Really) Finally Alex came to my rescue and told them to knock
it off. I don't think I've ever pee'd with a nicer view overlooking
that valley. 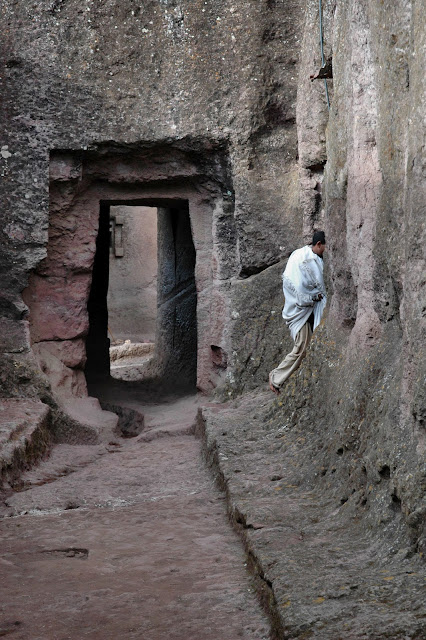 There were two dead blown up it looked like Army tanks on the side of the road. I don't know what that was about. We did come to a huge crowd in the middle of one of the villages. A plow would have been helpful to get through the people there were so many of them. They slowly parted like the Red Sea of Molasass. This was the local Khat market and it was a busy place. It made Monday morning Starbucks look like store selling heaters in the desert. There were big flower bunch sizes being examined.
There were waist height banana leaf wrapped bales for sale. And
everyone was looking for the best one. I didn't realize it was sooo
popular. For some reason I thought only the lower class chewed it, guess I was really wrong on that thought.

Maybe I'll come back to this later. Now I think I'll go for a walk
before dark.
Posted by Dorothy Macaw at 1:53 PM