End if the day and I'm a tuckered lil cowgirl. I didn't sleep all that well and lots of rough roads consisting of jostling and such. I didn't consider exactly how much work it is just sitting in a car and staying erect.

Today started at 7:30 take off for a visit to the Muri people. The first two reasons for coming to Ethiopia are in this order the rock hewn churches in Lalibea and the Mursi people. Both at opposite extremes in the country. The Mursi people are one of the iconic African tribes that I think about when thinking about Africa (that and the cliche' of Missionary in cooking post (which may not be that bad for the world)) The Mursi are the tribes that have the round plates placed in the women's lower lips. At the proper time, the guidebook says 20, the local museum says puberty, a hole 4 lower teeth wide is cut into the lower lip and a wooden plug is inserted. Then over time, my guide says 3 years, the museum says one year, the lips are stretched with larger and larger disks that look something like a rope pulley wheel. Some are plain and some are painted and some are etched. According to the guidebook the Mursi people didn't even know that Ethiopia existed until about 50 years ago, and I can see why. 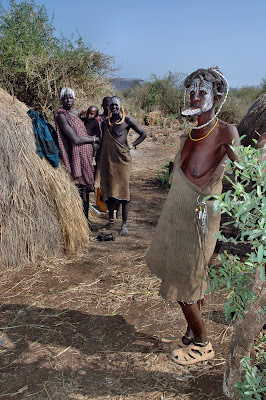 The drive here from Addis is arduous trek in today's 4X4's and reasonably modern roads. Omce you are here in Jinka then you need to cross the mountains to the Omo valley. The road was mostly a graded road cut through the mountains. Only problem the last grading was in the Truman administration and the dirt has been packed down leaving only real sharp rocks pointing you. We were flying along at a breakneck 20 KMH (12 MPH ?) when we hit the straightaways. Of course we had to slow down for the hairpins and somehow make a 3/4 lane road into a 2 lane road when someone was coming the other direction. Fortunately for us there were guardrails at the places where the vehicle would cartwheel for miles if the worst happened. The guardrail consisted of a small and I mean small berm made when the last road grader passed through.

Dry rivers and creeks were no problem for the Landcruiser. The 4 Landcruiser long pond was worrisome for me. He kept it in 2WD and mushed through it with water splashing up onto the windshield and water about 1/3 the way up the door. The worst part was knowing we had to come back that way and how bad the water smelled. To put it nicely it was "wiffy". My imagination went on overdrive and started looking for a sharp knife to commit HariKari (Supoku ?) if we stalled on the way back. Better that than living with the aroma of fermented cow poop, insect larvae and mosquito piss - plus a few other things I'd rather not think too hard on.

Along the way we scared up some wildlife. A pair of Kudu, antelopes with long corkscrew antlers. A pair of wild pigs that looked fearsome from safely inside the vehicle's cab. They were about the size of a large boar that you see at the fairground, but absolutely solid. Nothing jiggled and their hair looked like you could use it was sandpaper. Then there were the tusks. Curved upwards, sharp and almost a foot in diameter. They ran at Gran Prix speed and nothing dare get in their way.

There were several villages on the way all with about 10 to 15 huts. The typical hut, bent branches covered with straw. The main difference was that the doors were really small.  If they were 3 feet tall it might be an exaggeration. This is to keep the wild animals (read carnivores) nout of the huts at night. We stopped at the one without the group of tourists

The people were pretty relaxed , make that immune to me walking though their village. The guide said it would be best to leave te camera in the car, tour the village and then when finishes look THEN bring out the Nikon. Otherwise you couldn't breather of move for the pestering for camera shots. I hate to admit it, but he was absolutely on the money. A little requests for photo-ops but not too many. The men were in their part of the cmp and the women were in theirs. I asked about sleeping arrangements and was told that men get their hut and women get their own. I asked how they got new Mursi, since there seemed to be several of them around on hips or tits. He said something that I took to "They manage".

The men were sitting the the shade of a hut drinking coffee out of a communal bowl. Take a sip and a bite of salt and then occasionally spit. Just like home. They welcomed me to sit with them which I thought was nice. But I have seen men drink coffee - out of their own cups and a little less spitting - so departed to go tour the rest  of the village. 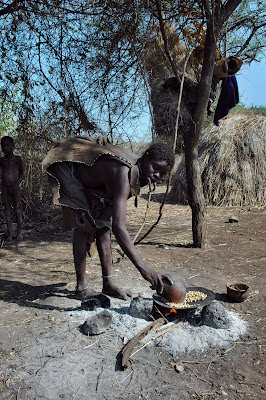 One woman was dry roasting on an iron plate the exact same smell and look of Corn Nuts you can get in a bag at the 7-11. These were the low fat version and low sodium version though. A group of about 4 or 5 women and post pubescent girls (I guess in their culture the proper term here is "women") were sitting with their lips a drooping without their plates in looking sad, but with nice smiles in return. They weren't sad it turns out just with the plateless lip it just gave them a sorrowful look. One woman was shaving another's head using a tool that I can't describe since I never saw it, I can attest it was not made by Bic or Schick. She was getting a very close shave too. They acknowledged me and offered a seat. I thought that was thoughtful, that they saw me as a little more the a walking Birr ATM. I sat with them a little while and then the guide said it was tome to break out the camera.

The camera arrived and so did the chant of "Photo - photo" from the encircling crowd. I had to choose who to shoot and who to exclude from my viewfinder, because each adult person in the shutter was $.30 and tjey would try and jam as many people in the shot as possible. I chose 4 women I thought very interesting and took the picture and didn't notice the two babes in arms so there went another 4 Bir. I just handed the guide a wad of bills and had him sort it out. They were very passive about the picture and aggressive - insistent about the Bir. One girl had a very nice scarification on the left shoulder so she stood there with her back to me facing away. I went around front ad asked her to turn her head towards me over her shoulder to get  some face in the poicture. Like Naomi Campbell she turned her head and waited for the 'click'. Only she didn't throw her shoe or cell phone at me. They sure have a different outlook on nudity for both men and women and I can honestly tell you that the rumor is a myth. Because here the men can't blame it on the cold.

The drive back was totally uneventful. No animals that I saw. The driver said "animal" and pointed ahead of us. A half a mile away I could just make out two antelope type critters on the horizon. I had to squint to see them. The driver saw them while avoiding the potholes traveling at a breakneck 15 MPH. What an Eagle Eye !! There was one eventful thing that happened when we got back into town and turned on my GPS. There is a Geocache in this town ! Before I left home I downloaded all ten Ethiopian Geocaches into my GPS, just in case. we drove close to the spot and it was close to a couple buildings, not secluded like I was expecting. Right up next to the building it was reading between 7 and 9 feet. Click the light bulb came on over my head. IT IS INSIDE THE SHOP !! The guide asked in the upostery shop and left them looking perplexed. The jeans shop next door produced from behind the counter a blue Tupperware type tub. Inside was a log book and several trinkets. A genuine real live Ethiopian geocache. I'm going to love rubbing Wayne's nose a little on that one.

Back at the hotel I had a bowl of soup and chatted with the German couple I have been following around. Took a nap - well a doze, read my novel and just relaxed until 3 pm when we went to the museum. A very nice little museum. Everything was graphically depicted in one corner of the display case and numbered and captioned in both English and Amharic. Then there was a Western group of women who in 1995 came here and interviewed women of tribes from all over the south about their tribes practices and customs. Lots of peer pressure to get circumcised or scarred or lip plates. It sounded like it was mostly voluntary, BUT the other women would pressure you to conform. "The clitoris must be removed. It is a man's part." An ultimate insult is to say to another woman "You have a clitoris!" When asked about Western or government efforts to stop all these practices were responded with - Oh, sure, ok, we'll stop" then continue on as before and hide when the inspectors came around.

So that brings me close to current. Tomorrow back to Arba Minch and then Addis. I was looking at the calendar and asked the driver how long the north takes. He said 12 days - BUT if I flew I could do the entire loop and fly from the furthest away back to Addis in time. We shall see what the tour operator has to say in Addis.
Posted by Dorothy Macaw at 5:06 PM