After a brief nap and of course you can't forget the tea Sherri and Jim and I were taken on a game drive by Teko. The island where the airstrip is small but Teko took all the back roads and some off roading to see the local animals. There aren't near the number or variations as the land based camps but there are a few and it is better than nothing. I prefer the motor boat, but boating is where my heart lies best. I'd be happy just going for a ride on a boat. Any game seen is purely a bonus.

We left the camp via motor boat to the landing on the island and then transferred to the Land Rover. Warthogs galore were on the airstrip as were most of the other prey animals. Management has built a small berm dyke around the airstrip because when the water gets high it floods the field. The animals graze and do lookout on top of the berm. It gives then just that little better edge to see just a hint farther observation on the predators. Though when the dikes were first built the local leopard learned really quickly that she could hide behind the berm and ambush the grazing animals. I guess it didn't take all that long for the "advantage predator" to become "advantage prey".

We did do a lot of water wheeling. Traveling through hub deep water. The water breaking away from the Jeep and washing the reeds aside and scaring the small fish. The water is crystal clear. By the time it gets this far down the delta it has been filtered and cleaned by the papyrus and reeds into (according to the guide books) pure enough to drink.  As we passed through a water crossing we were surrounded by a flurry of small flying gnat like bugs. Jim was not particularly happy about the sun or the heat. The bugs made him a little wacko. He was slapping and swatting at them and not making a single kill or dent in the population. Eventually Teko sped up and the little bugs got blown off and away.


As we were traveling near the water I thought I saw a crocodile but it was only a logidile. We were mostly looking for 1 of the two leopards on the island. There is a mother and her full grown daughter. Mom is accustomed to the Land Rovers but daughter is still skittish around the vehicles. Teko didn't find a single fresh track of either of the cats. He saw some hyena tracks and I was looking forward to seeing them but they were as elusive as the cats. Some zebras and the ever present deer family but nothing that really has a "WOW factor".

Back to camp long enough to was and pee before dinner. We were joined by the ever new clients. A German couple and Barbara an 87 year old woman who was traveling alone. She it was pointed out should be my ideal. She was ... until she opened her mouth. Everything was a bitch. The room was too small. The shower too big. The toilet was inconvenient. Fuck a duck the tent is only 15 by 20 for chrissie sakes.

Dinner was a feast .... Again. As soon as the first course was done the German man sitting next to me rang his glass to get attention and started this long speech. I was saying to myself .. No, not one of those. Well he did get to the punch line after a bit. It was one of the staff member's birthday. And he wanted us to sing the universal birthday song. That was very nice.

After dinner the long escort back to the room and to bed after a shower in the dark. I just don't feel at ease with no curtains on the screens to have the light on in the room while I am in the buff. So, my little flashlight puts out enough light to keep me from walking into a wall. It is really kind of tranquil. In bed it was only good for a chapter and a half before lights out.

I opened my eyes and saw the horizon off to the west was lightening. So I got up and puttered a little before footsteps on the boardwalk announced the coming of the call and hot tea/coffee water. 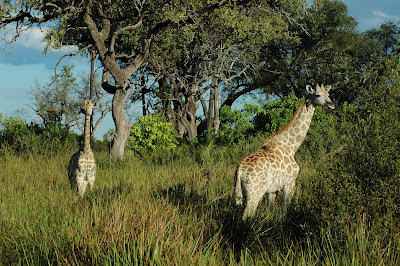 After breakfast Sherri and I went on a game drive again looking for the leopards. They were again resting from their feast of 3 days ago. We still didn't see them. We did see 2 mom and 2 kids giraffes. I looked at one of them through the telephoto and e looked like he had a bad ear. Teko said it was cocked back. I looked closer and realized that there was a bird IN his ear. Kind of a spa experience for giraffes. I saw some interesting birds along the way and got some shots that I think/hope will come out to what I intended.

After coffee we drove slowly back to the camp passing a long garage like building with a metal roof. I then realized that it was not metal but solar panels. The introduction said that the camp was solar powered but I thought it might be just lip service to being ecology minded. Wrong again. Lunch and conversation around the table and now we are current.

Posted by Dorothy Macaw at 7:15 PM