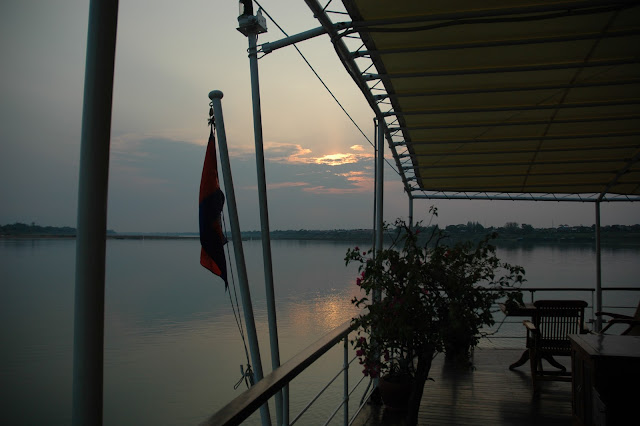 It's mid day and I think I've quit my bitching. We still haven't entered the Apocalypse Now / John Kerry part of the Mekong. That part where the boat's sides scrape along the jungle that threatens to over take the river. According to the boat's Purser that should happen later today. Right now we are in a very wide spot,  maybe a mile wide. We are back exactly where we boarded the boat yesterday.

Last night we anchored mid stream a few hundred yards from here. I went to bed around ten p.m. and found the bed to be a little firm (but both beds here in Cambodia have been firm) but comfy cozy. I nodded of pretty quickly and got a good solid six and a bunch of flopping for 2. I looked at the window and saw that the light had changed so fired up the immersion heater and made myself a cup of Starbucks and wandered up to smoke my last cigarette and sip my coffee. I was the only tourist up around then, of course the crew had beat me by hours I'm sure. Then back to my cabin for a shower and get ready to face the day. One thing I can say about the boat. Their hot water is really hot. None of this wimpy 130 degree stuff I get at home. Nope. This is pure near 180 degree stuff. After that luke cold shower in Siem Reap it was a welcomed blessing to actually get totally wet and soapy.

Then breakfast of course. The exact same thing as any big hotel chain. Go back and read breakfast in Siem Reap and you got the exact thing only in miniature. Except, and this is big. The orange juice is real, not Tang (The drink of astronauts). I am an orange juice snob it seems. As we were dining we were also motoring up river. I think this is the first time I've been on a vessel when they raised the anchor. A machine gun of an engine vibrating the entire boat. 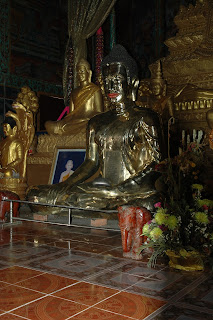 Around 8:30 a.m. we nosed into the bank (1.5 meters of draft) and tied us to a couple trees. Then we trooped up this medium sized hill to a multi religious site. Both Buddha and Shiva are represented, but mostly Buddha. Ry explained the life of the Buddha and then we entered a temple and I got some (I hope) nice first tourist type shots of my trip. I don't consider the 5 minute stop to look at the rubber tree exactly a highlight on the tourist check list. So at that point, I kind of felt that my vacation part of the trip had finally started. We wandered a bit and got the lectures on a monk's life and such and then walked 300 steps down the hill back to the boat (a nice paved trail lead us up). A little nervous making one of those  - if you stumble you are going to do a lot of bouncing on the way down, because there are no landings every fifty steps. Just three hundred steep steps down.

Back to the boat that turned around to where we had started from yesterday where we nosed into the bank and had lunch and drinkie poos and such in preparation for a village tour later this afternoon. Lunch was a sit down and get served affair, like dinner. Today's protein choices were beef and crocodile. It tastes like chicken. :)
o.k. -- I'll try and get back with y'all after dinner.
Posted by Dorothy Macaw at 6:14 AM