Back to where I started this trip and I do mean back. I'm in the same hotel as before and the same darned room. A great room (If the hot water works tomorrow) 4th floor over looking the pool. Populated by mostly Westerners.

II never thought I'd say this - BUT - That was a pleasant bus ride. No speedometer of course. The driver didn't honk at every moto, or child or Mosquito to get out of his way. He kept the speed up there and he didn't stop and pickup the huddled masses to help augmant his retirement fund. I did get the nasty "You want to put you knapsack in the belly" look. But a dollar fixed that. Three and a half hours and a taxi would have made it in two and a half hours for eight times the price. $40 vs. $5.

Nicky's cousin (though how they are related might not be by blood. Who knows?) was at the bus stop with my name on a clipboard. I felt like such a rich bitch. "Uhhh.. YES. I am THE (insert name here)." He got me back in touch with my left behind luggage and then got me to this hotel safely. I asked him to pick me up at 3:30 and let's go take a look at the Shadow Puppet store. I have a friend with a seven year old and that might be the right gift for her. If I can pack it safely. I know she'd prefer a dinosaur but she may just have to settle for an elephant. 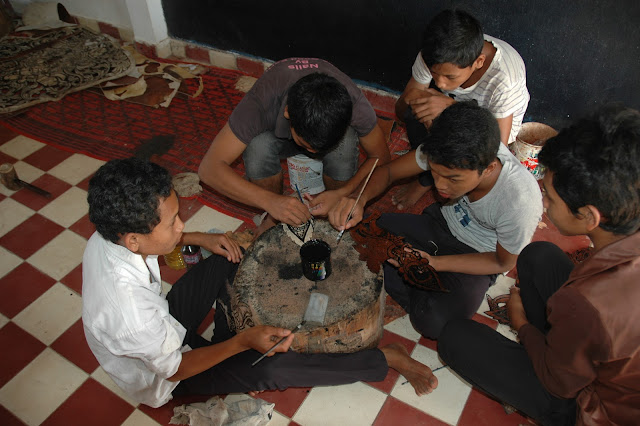 Today my quads are a little sore from 358 steps, but not too bad. Sniffles. Grumbly tummy. A beer on the veranda after the puppet factory should settle both problems just fine. I've really come to enjoy that at sundown. Well the first 2 or three sips. Then it is just another beer.

I really don't jhave a lot to say today. Certainly nothing as heavy as yesterday afternoon. I have a few things I'd like to pass on, but it is in the cutsie league.

The Vancouverites said that the average length of stay for a tourist in Cambodia is 2.5 Days. Plane loads of Chinese, Koreans and the rest of my former hotel's brothers and sisters land disgorge them. They spend a day and a half or two looking at Angkor Wat and then take off for someplace else. Let's see (9 + 6 + 6 + 12 + 5 + 3 = 41) I've spent nearly that long on buses and have yet to see much on the Angkor Wat complex. I guess I'm skewing the curve.

God, their Sprite's are sweet !

Nicky was showing me various fruits on the way around yesterday. He pointed of Pineapple, Mango, Papaya and Jack Fruit. Jack fruit is football size and covered in 1/2 to 3/4 inch spikes. When he was going to school he wasn't doing very well in his English class. The teacher made him sit on a Jack Fruit until he learned that particular lesson. It's a wonder he didn't switch to German.

The first day in Battambang we were driving to the 358 steps and two places had loudspeakers blaring away at 11 on the volume knob. It would be impossible to sleep when they were going. And one of them was just the pre-function announcing the upcoming wedding. I'd hate to see/hear it once the wedding got underway. In the hotel back in Battambang there were two sets of sponge earplugs with a note attached saying they were for weddings and funerals in the neighborhood.

That's kind of it for what was on my list. Mr. Station will be here in 30 minutes and I'm not sure that I want to risk  coma from the Sprite, but it does have ice in it.

Posted by Dorothy Macaw at 3:28 AM