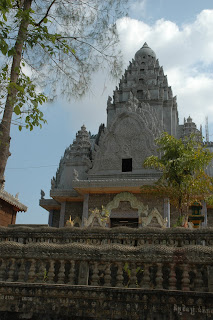 “Believe me, my young friend, there is nothing - absolutely nothing - half so much worth doing as simply messing about in boats.”
― Kenneth Grahame, The Wind in the Willows

So again we nosed into the riverbank yesterday afternoon and got on the smaller bus. I guess where we were going the boat couldn't get us there. We went to two places a high hill with a Buddhist temple and surrounding gardens. This was called the "Boy Mountain". Nearby was the "Girl Mountain" which was slightly taller with another temple on top of it. Fortunately the bus was able to drop us at the top of the hill. The fable is as follows.

-- At one time the girls were the ones who asked the boys to marry them and for some reason the girls wanted the boys to ask for their hand instead. The boys said they were happy with the status quo. So no one got married for a while. The boys wouldn't give in and neither would the girls. Finally they brokered a deal. The group to build the highest mountain before the morning star rose would be declared the winner. About half way through the girls realized they were out matched in strength to build the mountain as the boys were way ahead of them. So they thought about it and lit a lantern and held it aloft. The boys thinking it was the morning star stopped work, knowing they had it in the bag. The girls kept working through the night and when the actual Morning star did rise their mountain was higher, and so now the boys ask the girls to marry them. Awwww... (If the boys had an iPad they could have won, because there is a star chart app (There's an app for that.)) --

Then we went to the trip that seems to be required on every trip - the visit to the local village. It was better than some as we didn't have a gaggle of children tagging along pestering us for whatevers. The houses are all built on stilts. Well not concrete pillars but basically the ground level is completely open and where the family hangs out and works in the daytime. Then the upper floor is used at night and for cooking. I can see why too. It was hotter than blazes up there at three in the afternoon. The floor was split bamboo spaced a quarter inch apart, so you could see through to the ground below. There was one large room that took up 80% of the floor space and then a private room and a kitchen with 2 or 3 charcoal braziers. The private room was for the parent until any girls came into puberty then it was hers until she married and then it became the Honeymoon Suite. What happened if the were two girls was not made clear. The rest of the family slept in the large common room. 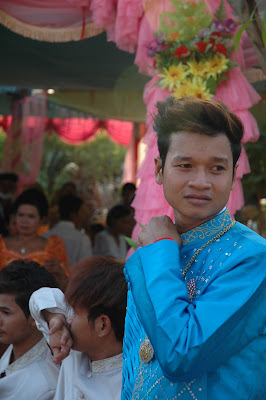 There was a wedding going on in the village as well. The mother of the bride was out front with a huge smile standing next to two of the maids of honor. All dressed like royalty. Make up perfect for the cover of Vogue. The groom was in electric blue and hair sprayed in a high almost bouffant. He made the old country and western crooners look bald in comparison. He looked bored and I assume ready to start the honeymoon. The bride was still in the middle of the tent soaking up being the center of attention. Then an exit through the gift shop. Really ! It was a school when we drove up (closed on Sunday) and had several tables with village made trinkets for sale. Some of the cruise mates bought bamboo leaf fans.

Then back to the boat for drinks, an infomercial by the purser on tomorrow's (today's) activities and then supper. Again good and almost gourmet. Then there was a movie "Two Brothers" about 2 tiger cubs that I decided to pass on and instead enjoy the ship's solitude and get to bed at an early hour. All this time we were cruising down the Mekong to Phnom Penh to anchor for the night.I watched another cruise ship try to pass us and fail until I got bored and went back to my cabin around nine-thirty and took a shower and went to bed by ten.

The anchor dropping at 1:30 a.m. blasted me out of sleep. My room is one of the two closest to the pointy end of the boat so I got the full effect. I'm glad that the afternoon infomercial prepared me for that. Otherwise the cabin boy would have had some additional duties in  the morning. I went back to sleep and woke a little before sunrise listening to the crew prepare to get underway for the day. I had coffee made and was on the sun deck with coffee, cigarette, anti-malarial and two cookies in hand at 6 a.m. I reduced my breakfast to a muffin and avoided the omelette today. I can't continue to gobble down as much food as I have been.

Then we again grounded the boat  and climbed the riverbank. This time to get in carts pulled my two oxen. I guess after all the food we had eaten they knew we would need two oxen for each cart. The crew insisted on giving us self photos with out cameras. That was fine because I never go home with a picture of me on a trip. I teamed up with Dawn the gal from Canada. The boat's crew suggested we ride toboggan style we both looked at each other and decided to go side by side. We had a very nice chat. She is a widow, her husband died of a brain tumor as he was writing his auto-biography. It was close enough to getting published that she is going to have a ghostwriter polish it up and print it. "Living in Oblivion" is the title and she's already found a publisher. I'll have to track it down when it gets published.

The terminus of the cart ride was another small village but mostly a Buddhist temple and some stupah's around. We went in and watched the monk bless a man making an offering and then went out and viewed the crematorium.

We had the local kids lamprey onto us when we arrived and our kid waspretty cool. She walked along behind us until we offered her a spot on the bus and she happily hopped on. folding a palm leaf into very pretty rings for us. I gave her a packet of Crystal Light in exchange. She seemed very content with that. On the return ride she gave us a really cute note and a drawing. This brought out a dollar from each of us.

Back to the boat for a day's cruise up the Tonle Sap River. This is how I had expected to come down, not the bus ride to the Mekong.  Lunch's proteins were phylo wrapped salmon, roasted duck and turkey with cranberry sauce. I opted out of the turkey but did find room for the other two. Then back up on top for the cruise through the narrow channels of the river that I had expected. mid afternoon found us at floating city where we turned around and headed back towards Phnon Penh where we will anchor for the night.

My arm is tired from waving to the children on shore. The have the Cambodian version of Ethiopia's Ferengi Fever. Yell, wave jump up and down. It must be the thing of the day to do. Kind of like when I was a kid standing on the overpass trying to get the truckers to honk their air horns by making a pull down motion with our arms. It didn't work all that well, but when it did it was really cool.

Dinner and a movie tonight (The Killing Fields). I saw it when it first came out. I might pass on it and catch it at home. It won't get over until ten thirty and bed sounds more to my liking right now, since I've still not acclimitized to the jet lag, and have been working on six hours a night.

Tomorrow is the Palace, and national museum in then a.m. and S-21 (the prison that the Khemer Rouge tortured and killed 17000 people) and then yet another bus ride to the killing fields. Concluding that day's tour and my time on the cruise at around 5:30.
Posted by Dorothy Macaw at 6:42 AM