Everybody has crabs here 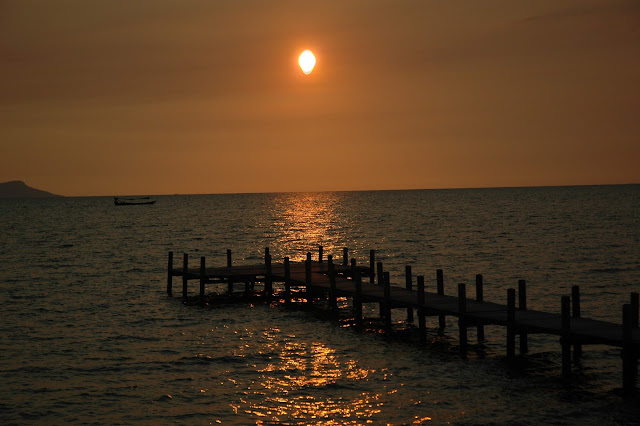 You miss 100 percent of the shots you never take.
- Wayne Gretzy

It is a little after noon on Saturday and I'm in my room under the A/C. I have been a sweat machine for eight of nine days now. I've sweated so much that the clasps on my bra have developed rust (really).

After last night's dinner while watching the sunset I returned and caught up on my writing and sent out a couple day's of emails. Then lights out around ten to some very vivid dreams and being a late night snack for some local critters I never saw or heard until the itching started. Up and awake around 6 a.m. hoping to catch the sunrise from my balcony but the clouds obscured the sun. They didn't obscure the heat or the humidity, just a nice view of the sunrise. Last eve's sunset was very nice though.

The hotel has 100 + rooms and only 10 are currently occupied. Probably due to no pool yet and some ongoing construction. They say it will be done in May. Then I assume the prices will rise, especially for the 12 rooms like mine with balconies and face the water. Breakfast instead of the regular buffet was order off the menu. They had all the things to do a buffet, everything except clients. 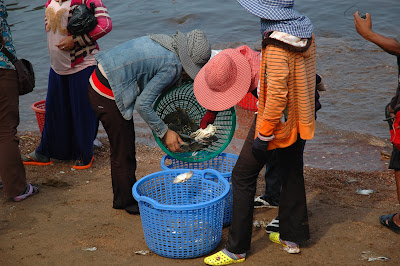 A call to Mr. Tuk-tuk and we were off to see the town. First stop the crab market. What a busy busy place. Crabs, squid, fish all fresh. So fresh most of it was still flopping. They don't seem to differentiate between male crabs and female crabs as we do in out crab fisheries back home. If she gets in the pot, she gets eaten. Equal opportunity there. Some of the females were overflowing with roe. I hope they don't kill the fisheries with this policy. Lots of ucky smells and slippery parts. This market is for the locals and if a tourist happens to wander by so be it, but it is not there for show. Nobody appeared to be against having their photo taken, so I got a couple people shots, besides scenic shots. 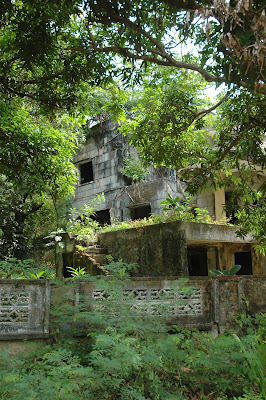 Then we moto'ed around town looking at the abandoned villas. I guess I'm not the only tourist who wants to see them. One had a Tuk-tuk full of women from the U.K. looking at the same house Mr. Tuk-tuk was showing me. Some were vine covered, some were graffiti covered and some were just a mess. We did the decrepit house tour and made a quick stop at the pier and back at the hotel around 11:30. By that time I'd consumed a quart of water and perspired a quart and a half. So I decided to give the A/C a workout until later this afternoon. I have seen most of what Kep has to offer to me and dinner and an evening stroll is about all that's left. I haven't decided on fancy schmancy restaurant of basic fresh caught. Right now fresh squid on the 'barbie' is kind of calling to me. We shall see.
Posted by Dorothy Macaw at 11:14 PM