My last full day in Cambodia. I'm leavin' on a jet plane tomorrow at 12:50 enroute to BKK. The plane is 8 or nine times more expensive than the bus, but it is also four or five times faster and after the last experience with that border crossing, cheap at twice the price (not quite, but almost)

I did go out to the circus last night. In Battambang there is a circus school where orphans and other disadvantaged children attend. They have become well known in the world and now have nightly performances here in Siem Reap. There are no lions, tigers or bears. No elephants or horses, just a bunch of pretty talented kids. Acrobats, contortionists, jugglers, slack wire walkers. It was like a micro Cirque Du Soleil. For fifteen buck you got an hour of some very fine performances with the occasional dropped juggling pin or missed landing. But they kept doing it until they got it right. Remembering tht these are students after all. Some of the graduates have indeed moved on to Cirque Du Soleil in Montreal. Fun performance under the stars on a warm summer's eve, life is pretty good.

After the show I got some ice cream and headed back to the hotel. Watched some t.v. and lights out about 10:30 and awake at 4:30 finally giving up a little after five. Over breakfast I was looking through Lonely Planet for ideas on sights around town. Maybe some Buddhist temples and just cruise town in a Tuk-tuk for the morning. Then under classes - Khmer Cooking class 10 a.m. $13 (and you ate what you cooked). So a couple hours of class, lunch all for less the the circus - I'm In ! I got there around nine secured a spot in the class and went a wandering Pub Street for a bit before class, before most shops opened and certainly before most of the tourists were taking their first aspirin of the day from last night's visit to the Babylon of Siem Reap. I took a coule pictures, found a little shop that I want to stop back in after class and sweated a little.

Class met and there were more than I expected. We broke up into two groups of seven. Where the other seven went I have no idea, I never saw (or at least recognized) them again. One of the couples in the group had come from Battambang a day or so ago. The had decided to take the high speed boat up the Tonsal River to Siem Reap. I'd read and thought about it, but the book said 6 hours in the wet and 9 hours in the dry. The bus sounded the better of the two to me. Less romantic, more realistic. They said that it had taken the twelve hours. I am so glad I didn't sign up for that one. First since the water was low they were transported by truck over bumpy dirt roads to the place where the boat could reach. Then once on the boat it kept getting stuck and their time kept getting longer. Finally the boat's engine just gave up and stopped. Dead in the water (no pun intended) the sat there. She said that there was no chance of drowning because the lake was so shallow you could actually walk to shore. The locals who were on the boat, called over some of the fishermen and hitched a ride to dry land and points north. She said it was well after dark before they had the official picker upper boats come to their rescue and finally at their hotel in Siem Reap at nine p.m. (did I write a version of this earlier?).

Then there was the young British couple. They both worked for British Air. He on the ground, she in the air walking all the way as a flight attendant. That's all I got to know about them.

The final couple is French. His English pretty good, her's not so good. He could listen and understand better that he could speak. He said that his job had just finished and the the company had flown her out ot be with him for a couple weeks post work vacation. I asked him what he did he said he was a cameraman. I gave him my biggest smile possible. At least it got a laugh from him. He is/was a cameraman for French Survivor. This season's first episode opened with the usual jump off the boat into the water, down near where I was on the Gulf of Thailand. There was a very big man on the boat with his girlfriend. It was a Romeo and Juliette romance. He was white and she was black. Both parents said that they could not accept their child's life partners choice and the two kids told the respective parents to take a flying leap at a rolling doughnut and went ahead with the consequences. During the first challenge the young man (25) had a heart attack and died. Laurence said he had been filming the man when he collapsed. He asked if he was o.k. and the kid assured him he was. The director told Laurance to let the medics attend to him without the camera filming. Needless to say Laurance was still a little shaken up by the whole thing. Everyone at the table (except me) knew about the death. (Hey it wasn't on Facebook, o.k. ?). There were a few gently probing questions about the events I could see he was uncomfortable and I backed out of the conversation. He said the there had been deaths at other Survivor shows (India and Pakistan I think) but this one went viral. After the young man's death they canceled the season and sent everyone home or on a few week vacation. One day of shooting was all that they did. 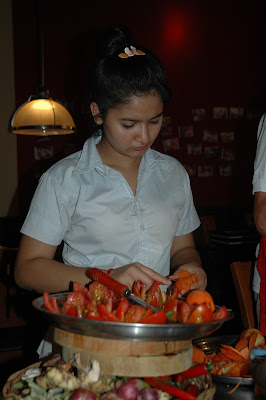 Back to cooking class. We each picked an appetizer from the restaurant's menu and a main. No one had the same combination and very few duplicate dishes. I went for two things I knew I'd liked their Pumpkin soup and the Fish Amok. We seven giants following the minute Snow White went Hi-Ho'ing off to the market in search of vittles. We didn't actually buy anything, but she did point out to each of us the raw ingredients of each of our dishes. when we returned we were given plates covered in Saran Wrap that had all the vegetables we would need on them along with a peeler and cutting board and knife similarly wrapped. We were then told how to chop, mince and slice each of our vegetables and she made Gordon Ramsey look like a pussy cat. You were going to do it right of not at all. At least she didn't make me sit on a Jackfruit. After things were minced to her satisfaction we who were having Amok (2 fish 1 shrimp) put our vegetables into a large wooden mortar and were handed a large wooden pestle with the instructions "You make Bang-Bang". We pounded and pounded only to hear "More Bang Bang !" and pounded until all those onion garlic, turmeric, lemon grass and ginger had been pounded into a very thick paste. I have a machine that could so something similar in 30 seconds. If I lived in Cambodia, the family would only get this dish on Christmas ! The Pumpkin soup was relatively easy just chop up the vegies and simmer for 10 to 20 minutes. She then showed us how to carve carrot and tomato flowers and birds. I didn't do that, I still have a cough from the sniffles of a few days ago and didn't want to share that joy. 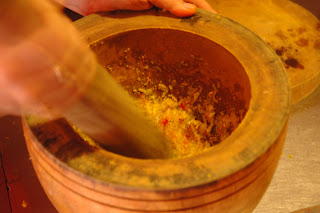 Then back into the kitchen. Have I mentioned it is hot here in Cambodia ? Add four wok burners open full and three students and one instructor in a room the size of my bathroom at home - well you see where I'm going with this. Vegetables, mushed spices carefully Bang-Banged a handful of fish and a couple ladles of coconut milk cook until thickened and the fish cooked. Add some water if necessary. Pour into banana leaf bowl and Amok ! Pumpkin soup went into the blender and then back on the stove with coconut milk and simmered until creamy.

My Amok rivaled anything I'd eaten this trip. Maybe the Bang-banging improved the flavor. It was really good. The pumpkin soup was good but missing something, maybe a little more garlic or ginger. A tweak here or there and it could be a great winter dish. Now Laurence's tomato soup was killer. It sounded so mundane on the menu, but the flavors really came through.

We had all entered our email addresses into her iPad and by the meal she said we could expect all the recipes to be in out inboxes. The boat person checked her email and there they were, along with pictures of us. I just checked they are in mine !! Way cool.

All in all a great final day. A fun four hours, interesting people and great grub not a bad way to wrap up a trip.

Posted by Dorothy Macaw at 4:54 AM