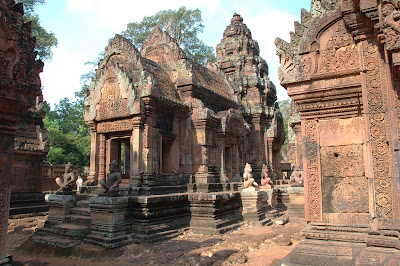 After a power nap yesterday and a shower I changed clothes and headed out of the hotel to went my way through the night market and Pub street. My clothes were to sweat stained to wear in public there were sweat stains on my sweat stains.

I wanted to pick up a couple small trinkets for a few friends but they had to be small because as usual I felt the need when at home to pack everything in the house - just in case. I recently reviewed what I haven't used so far and I honestly could have saved 10 pounds of unnecessary

The Tuk-tuk driver got me to the most garish place east of Las Vegas. Lights blinked and huge neon signs over the roadway directed me to one side of the street where the night market  was situated. The other neon sign pointed the other direction reading "Pub Street". There were more tourists packed here than Angkor Wat on Christmas vacation. The Tuk-tuks were parked wheel hub to wheel hub and as soon as I alight from my Tuk-tuk I was instantly offered two or three more chorus of "Tuk-tuk Madame ?".  I stepped into the crowd and entered the night market. It wasn't exactly as I had pictured it. I was expecting some fruit and vegetable stands, maybe some meat stands and perhaps a stinky fish stand - with - the occasional tourist geegaw stand interspersed into the mix. There was nothing 'Cambodian' about the market except for the word "Cambodia" on the occasional T-shirt. Silk scarfs, cotton scarfs, sarongs, T-shirts, baskets of spices, carved Buddhas and on and on. Either the same owner owned all the shops or they all bought from the same vendor. Every T-shirt shop had exactly the same merchandise in the same sizes and the same colors. Ditto for everything else. The closest to anything real Cambodian was the foot massage and that was probably Thai in origin since the Khmer have such a foot abhorrence. I found (sort of) what I was looking for. Not the color or the perfect combination of colors, but there is something in that minute hole in my luggage. I did some dickering and know full well that I over paid if I had bargained harder. For me the price was fair and certainly only a third of the price I'd pay at home. Heck I overspent sooooo.... much that I spent twenty-five cents on a small bottle of water. I can get a pack of Marlboro AND 2 liters of water for a buck seventy-five all day long.

Then across the street to Pub Street - almost. At the curb I was stopped by the urchin with the infant on his hip holding an nursing bottle. "Pleeese I no want money I need milk" "I neeed  milk for the baaaybee" "Pleaaaseee miiilllllk". Thank you Trip Advisor Dot Com. Welcome to  "The Milk Scam". They kids are all stooges for the real thiefs the pharmacy (conveniently) next door selling the Enfimil (you know that formula that comes in cans?). The product is purchased at a very inflated, the tourist get all sorts of warm fuzzys inside and then the formula is returned to the store to be resold and the kids get a few cents and back on to the street to catch another big tourist fish. Even when you tell the kids "It's a scam !!", "Noooo Madam noooo scam. Miiillllk !" I did offer to buy the boy a sandwich from a cart that was right there but no. Only "Miiillllkkk Pleeeese" and I'll tell you they have that whine pitch perfect. They must go to whine school. Every other kid in on the scam had the same inflection and whine. I'm sure it works or else they would be doing something else.

Pub street was exactly what I had pictured. Restaurants and bars as far as the eye can see. Each place perhaps 20 feet in width all offering something different. On Pub Street you could eat your way around the world. Curry from India, lamb from New Zealand, Local fish, goat and crocodile, and even Ostrich and Kangaroo from the land down under.The narrow sidewalks jammed with tourists. So jammed that at times it was easier to step into the gutter or the street than to wait out the opening to appear. The paranoid in me was inside yelling "Get the heck out of here. This tourist Mecca is not my style, but is exactly the Bali bombing style of a few years ago." I travel alone for several reasons, one being that as a solo traveler I less of a target when there is a tour bus full of tourists nearby. I silenced the alarm bells and continued on.

The Lonely Planet had highly recommended a place called AMOK. Amok is a signature Khmer dish  of meat (generally fish) cooked in coconut milk and spices. It's kind of a stew. The sauce I've experienced has run the viscosity scale from soup to cream sauce. Amok (the restaurant) had an offering of five different Amoks. Beef, pork, shrimp, chicken and veggie. along with a side of rice i was a last you until the next afternoon filling. The sampling was good, though I do have to admit that the fish version I've had was much more to my liking, but it was nice to try them all and find out.

After the meal I stepped into the street and was hit with "Tuk-tuk Madame?". I tought he was a tout that directed me to a real tuk-tuk driver and got a cut of his fare. "Show me your tuk-tuk.". He walked me over to the rattiest tuk-tuk powered by the most underpowered engine I've seen so far. If there was even a speed bump in the road the poor thing struggled over it. The fare set was $2. That was the asking price and no one pays asking price. I wonder how far down he would have gone. When we got to my hotel I gave him the agreed upon two clams and 1000 Rials ($0.25). He thanked me, wished me along life and thanked me again (really). We have it so good.

I met Mr. Station at 7 a.m. and we took off for temples yet farther afield. Bantay Sarei is 30 Km out of town (18'ish miles) it's claim to fame is that it is carver out of pink sandstone, A smaller temple but with great lintels and walls. This is temple number eleven for me and they are all starting to run together a bit. Each has it's own personality atmosphere, but with the same basic architectural floor plan. Enter from the east, cross a moat or two or in this case three, most of them dry right now. four entrances at the cardinal points of the compass and four towers on the corners with a single taller one in the center representing Mt. Mereu the Hindu mountain to which we all seek to attain. I'm not sure that if you handed me photos of all the temples I have visited that I could pick out many of them from another. I'd like to describe it in flowing prose, but it is now 30 hours later and I'm a little fuzzy on the detail. The sun was low and the tourists not scarce, but not overwhelming either. I had moved to one side of the entrance with the sun at my back as waited for a few fellow gawkers to stop gawking at the front and go inside so I could get a photo of the temple without some place's advertisement on the back of a T-shirt. A woman walked near an stood and waited. The last started to go into the temple and then stopped. I said under my breath "Go, inside all ready !". She looked at me and smiled. Then she said "You pick the best spots for photo.". That made me feel good that I seemed to at least look like I knew what I was doing.

After draining my camera's battery enough we split for other pastures. I got a shot of a "Johnny Walker gas station" along the way. The next stop on the trail was the Landmine Museum. nIt was sort of small and had lots and lots of reading. Basically we all know how bad landmines are and that they never seem to just die. They lay there for 30 years plus and suddenly someone is an amputee or as widow. A farmer might have walked the same field a dozen times in the past and one day in the rainy season because the ground is softer steps a few inches different than last year and the rest we know. Most of the anti-personal landmines are designed to main and not kill because it takes more people to deal with a combat wound than a KIA. There are the occasional anti-tank mines where a huma n doesn't stand a snowball's chance of surviving that one. 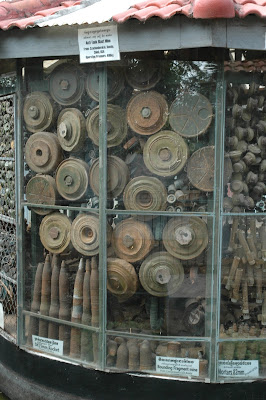 There were (deactivated) mines there from about every first world country that you could think of including a very large contingent from my and most of your's homeland. UnExploded Ordinance (UXO) were another headache as well. There was a map on the wall with a red dot on it for each sorte' flown by U.S. forces during the Vietnam War. There were places that there was so much red that it looked like a wide red line with no white showing. Most were intended for enemy troops, but most fell harmlessly or on innocent villagers. That did surprise me nearly as much as the fact that nearly 20% failed to explode on impact. If most of us were only 80% effective in our jobs ghey would find either a better way to do the job or a different object to perform the job. Granted this was in the half century era ago, but I wonder how much better we've gotten in our vehicles for delivering death.

A pair of temples more on the way home filled with sun, heat and crowds. One was supposed to have a great view of Angkor Wat (if you had a 400 mm telephoto) that I decided could live without my foot steps on top of. Not because of the climb up, that I could manage, but the walk down just scares the heck out of me. No handrails, steps maybe 6 to 7 inches wide and 10 inches tall and no landings for the entire staircase. I misstep or a poorly placed heel and you get to find out just how good that travel insurance you bought before the trip actually is. Yes I am a wimp.

So that is that. Maybe the circus tonight. I kind of wanted to see a boxing match as well but they are only on Wednesdays. Right now finish my beer and take a nap.

Posted by Dorothy Macaw at 4:30 AM