My boat was a bus

Finally the reason for the trip has begun. I'm not traveling in between places to get to see the sights. 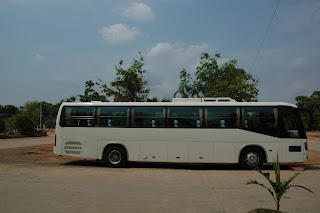 I awoke with a gigantic headache. I thought it was from sinus problems brought on by the nearly 24 hours a day of air conditioning. I tried all the things that make my sinus headaches abate and it still raged. Finally the light above my head went on and I thought it might be caffeine withdrawals. I've been drinking some coffee, but not nearly my requisite cups at home and the the double triple Starbucks Americano. I doubled up on the Starbucks Via packets and the sugar. Within 20 minutes I was fully recovered. With the added bonus of a fixed exhaust pipe.

Breakfast was fine. The usual buffet you get including and egg station and a noodle station. Fruits, cereals, juices and breads. It was missing croissants and marmalade though. The dining room was a large cavern affair and even though it was half filled I'm glad I was alone, because conversation would have been very difficult. I decided to get some local money since all I had were U.S. dollars and I figured it would be easier to navigate the local economy with the local coin of the realm. I gave the woman the the hotel a Benjamin and since threre was a worn crease down Ben's face she wouldn't accept it. Crikie ! I'll find someplace to accept it at another place I suppose. After all that minor hissy fit over the bad C note I went to a different hotel to meet the boat/bus and handed her a different hundred and asked got change. She whipped out 3 twentys, two tens, 2 fives and ten singles in U.S. dollars. It seems U.S. dollars are the preferred currency even over the local stuff.

I caught a remork-moto to the hotel where the meeting for the boat was. Now there is the place to stay. Quiet. Green. Lush. The staff walking noislessly probably on little clouds. I thought that perhaps a splurge might be in order when I returned. It was a nice thirty second dream until she quoted me a $225 Superior and a $250 Deluxe (with a pool view) a night. I guess they don't have and regular rooms. I asked for a multi night - cash discount. Well at least she didn't laugh in my face. Though she did make it perfectly clear that, that was the price. Fine !

The boat's guide Ry (pronounced Ree) asked me how long I'd been in town and if I'd seen any temples. I said "They have temples here ??! Cool !". I'm still not certain that he knew if I was joking of not. At the appointed time we boarded the appointed bus. Another damn bus ! Well it is going to be a short drive to the nearby lake to get on the boat. Five hours later we arrived at the boat. Its a six hour bus ride to Phnom Penh. We did stop for one 15 minute pit stop and a 2 minute look at a rubber tree. The rest of the time was another stinking bus ride. Ry did a good job explaining things like how most of the people live, the Pol Pot years and Pol Pot's life story. But still it was another bus ride. 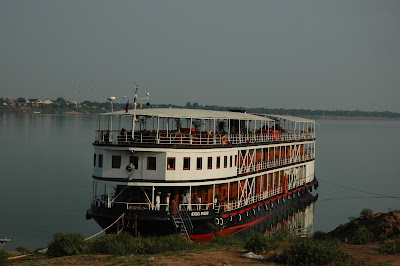 This cruise is not panning out as I had imagined. We got on the boat and had the obligatory safety and this is how the boat works speech. Then he explained the itinerary. Most of the people on the boat are going on to Ho Chi Minh City in Viet Nam. My 3 night / 4 day cruise down the Mekong looks something like this. ! day bus ride. Moor out in the middle of the river, Cruise up the river tomorrow and get off to see a temple in the morning. Back to the boat for lunch at the same place we got on. Spend the night someplace. Sail down to Phnom Penh oor in the middle of the river and then depart the next day, probably on another stinking bus. Not quite the days spent leisurely chugging down the Mekong watching the green countryside flow by. Just like John Kerry saw in his Swift boat in the 1960's. Maybe I'm pre bitching. I certainly hope so.

This group is certainly less stuffy than last years group. Only 18 people on a boat that generally carries 60 so there is lots of comradery. Add in the mix four couples from Australia and it's good times all the time. Tomorrow I'll probably singing a totally different tune. Either about how much I love the trip or how much I hate my crew mates. The tribes have been established. The Aussies hand about one another and make a lot of noise and generally have a heck of a good time. The Brits and the Norse hang out in their pairs, alone but will happily mix when necessary. The single woman from Norway tries, but hasn't found her clique yet. I and the woman from Canada kind of flow from group to group, but I find  myself hanging with the Aussies more and more.

Dinner was a formal (not formal dress) sit down affair. Four courses soup to dessert. It was good tourist hotel food. Not gourmet, but not bad either. Above average but nothing I would travel 20 miles for.. Then after most of us slipped up to the sun deck on the top of the boat and they chatted and I typed this.

Posted by Dorothy Macaw at 3:16 AM