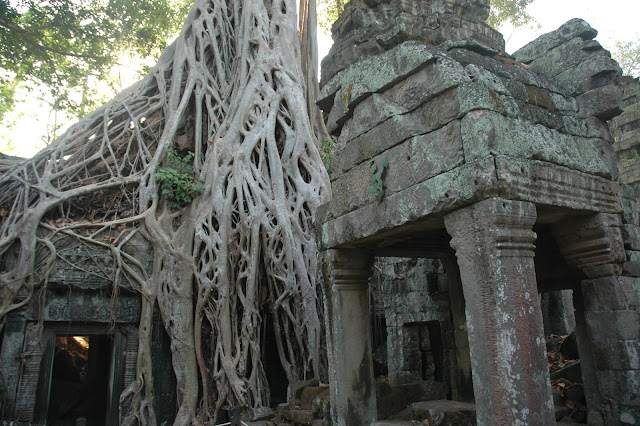 What was I bitching about yesterday ? Sniffles ? Gnarly tummy ? Well the sniffles seem to have abated at least the tiredness that came with them is certainly reduced. I had a 7 a.m. meeting with the Tuk-tuk and instead of one mug of coffee I had two. The caffeine jolt either killed the sniffles or maybe it was just time. It certainly chased away the tiredness.

Sleeping was a challenge last night. The poor A/C in the hotel couldn't keep up and there was one lousy stinking mosquito in the room. I tried to smash him a few times and send him on to his next life but he was alot faster than me. All that happened was besides the new bites were the red palm prints left where he was a millisecond ago. I woke around midnight and was hot but the top 'sheet' on the bed is two sheet duvet filled with a blanket. When I covered myself to hide from the 'skeeter then I was too hot to sleep. When I was uncovered my legs were a mosquito buffet. A little late I realized that if I put my lightest pants they would be cool enough to sleep AND make the mosquito's midnight snack a little harder to attain. 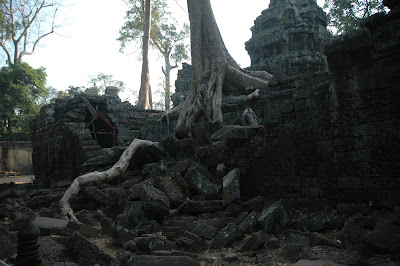 7 a.m., no breakfast I met Mr. Station and we headed for a big morning of Tomb Raider. Ta Phrom is one of the many late 12th century temples here in Angkor Wat. It is also one of the big 3 that are on everyone's must see list. Angkor Wat - Bayon (with the faces) and Ta Phrom. What sets Ta Phrom on the list is that it is the least restored temple in the complex. There are millennium old trees that have grown around some of the walls. They are now part of the infrastructure of the temple. So much so that if they were removed the walls they have engulfed would disintegrate. So they do serve a purpose beside adding real ambiance to the temple. I know this is not the way the temple was rediscovered but it certainly gives you an idea, albeit a very sanitized idea of what all the temples would have looked like in the 1850. That and vines that needed a machete 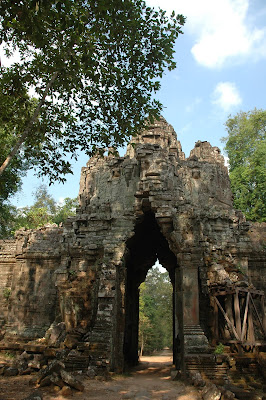 to access the room and probably a poisonous snake or ten, along with malaria and most importantly - No air conditioning. For about an hour I had the place almost to myself. I was even able to sit on a wall and just chill out while watching a strangled tree that was very popular with the photographers (myself included). But for those 15 minutes I owned the temple. It was a great feeling.

Tomb Raider was partially filmed in this location and there is an iconic tree that was in the film. I didn't see it on my way through and could see that I was past where I was expecting it to be by the way the architecture was changing. I asked a guide if he could direct me to the general area of the tree. He asked me if I had come from the East or the West. Well of course I came in from the east. A) that is the way the temple was ment to be entered and B) that put the morning's sun to my back and made the camera shots more dramatic. He said it was to the northeast back to where I had already been, but had overlooked. Then he asked if I had entered from the east or the west. I answered him, but thought it ann unusual question after he had given be direction. Whatever. I found the tree and waited through the rest of my fraternity and sorority brothers and sisters to get snapshots of themselves in the oddest poses. One of the all time favorites seems to be a big smile and  the right arm extended overhead and finger pointing at --------- nothing. Maybe if I saw one of the poses in an actual 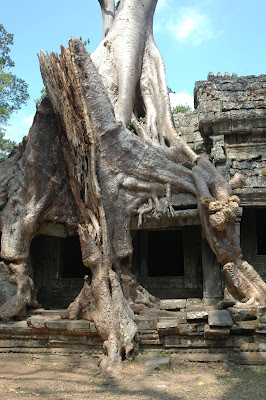 picture I'd understand better. I relaxed in the atmosphere in the of mystery what man creates, nature sets asunder. I'm sure someone else said it better, but you get the idea. I continued westward and as I was nearing the second western gate my first our bus group of the day was entering from the west. Then another and another. Then understanding of the guide's question came to me. Tuk-tuks park on the east, tour buses park on the west. He was judging the time he and his clients had in semi solitude as well and me.

Mr. Station was at the appointed time and place. Patiently waiting for me in a hammock that he had attached from his rear Tuk-tuk roof support the the opposite front support. This country is the hammock capital of the world. Almost anywhere you find people you'll find a hammock. Strung near the rear of small shops where the shopkeeper lazes until a customer walks up. As soon as the transaction is concluded, back to the hammock. I've seen lines of pavilions in the main square on nothing but platforms, roofs and hammocks. Generally filled by men, but women seem to get their 'lax'in time as well.

We then proceeded to 6 more temples. Each less picturesque than the last. Probably more from there being more and more people to get in my photographs and the sun rising higher and hotter to raise my discomfort and reduce the definition of the temples. I started to recognize the same Tuk-tuk' ers at the following temples. Some smiled back knowing we were on the same route and some oblivious to those and probably that around them.

By the time we got to temple number seven it was devoid of trees and shade and engulfed not by picturesque nature but tourists. We stopped in front of one shadeless typical Ankor'ian temple. It looked to me to be nothing except heat and the same thing I had already seen 5 times today. I opted out on this one. A combination of getting a little spacey from the heat and not having breakfast were the obvious culprets. "Back to the hotel, James" The guide books all suggest going out in the noon to four time period to avoid the crowds. There is a very good reason there are no tourists out the. It's bloody hot then !

Ry, the tour guide from the Pandaw said he was going to be in Siem Reap these few days I'd be back. I asked Mr. Station to stop by the Hotel Victoria on the way back. This is where I met the group for the cruise ship when I first arrived in town. The desk clerk didn't know who I was talking about, but the bell Captain new exactly who I meant. He told the deskman where to look in the directory and made the call. I'm not sure if I woke him of not but the conversation was certainly sluggish. Then he said "T*****a !! I remember you !" How could he EVER forget me, I asked myself. I had hoped he might be free to do a day or two of guiding me around, but he was already booked by some big wigs from the Pandaw company. Great idea that just didn't work out.

So back at my abode with a belly full of soup and a few fries. Think it's time to go see about a siesta to make up for last night's flying visitor.
Posted by Dorothy Macaw at 3:38 AM