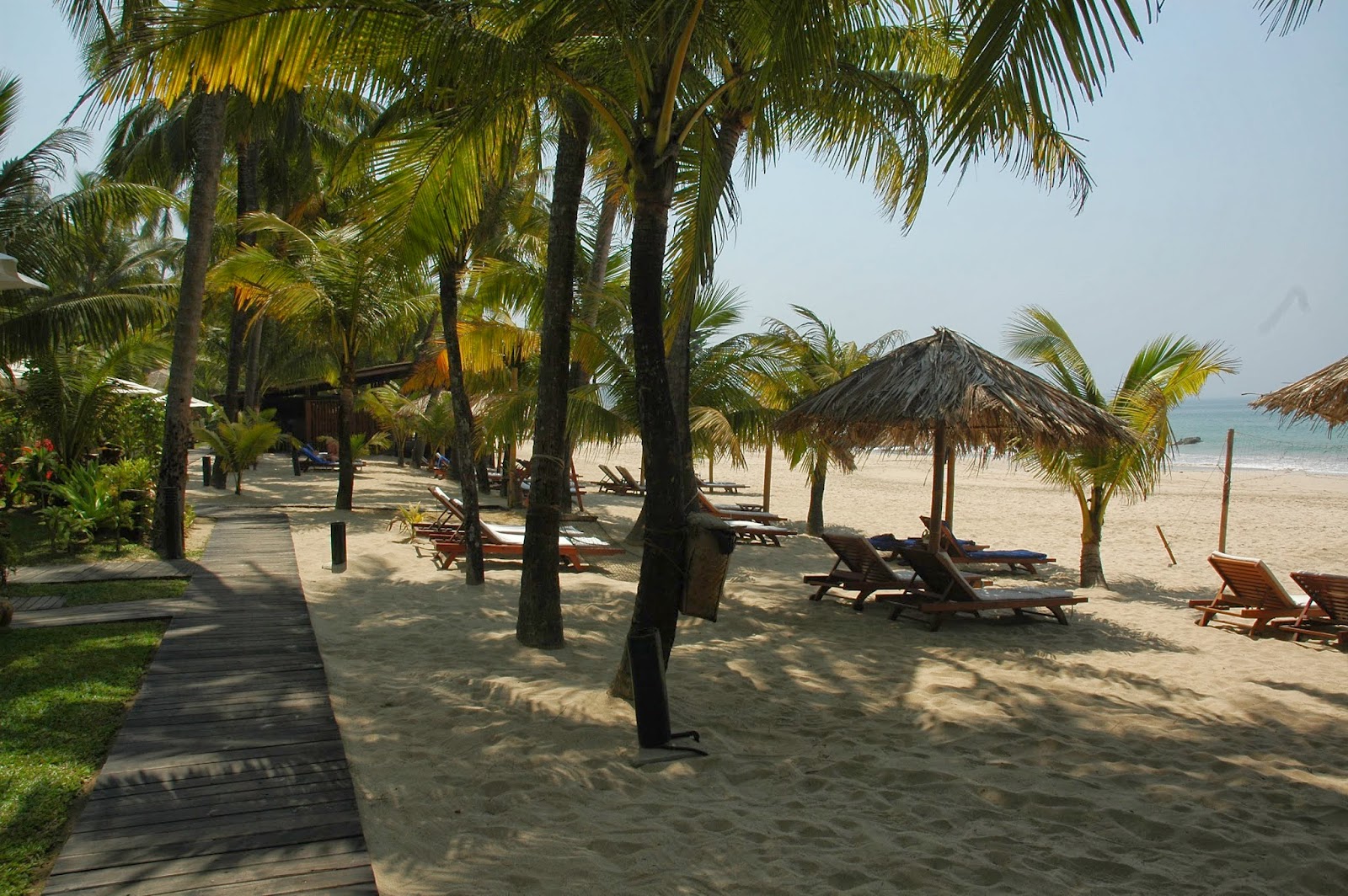 You know those Corona beer commercials with the palm thatched umbrellas and the waves gentle breaking in the background. I am there except the beer is Myanmar Beer. Pretty nice digs as they say. Beach front room over looking the Bay of Bengal with A/C and everything ! It is coming at a price, but reviewing my finances I can handle it.

Last night I walked down the street to the restaurant that Franco recommended. It is a pizza cum spaghetti place. I wander up in all my touristness at the appointed time for dinner and walk up and the girl looks at me. I look back and nothing. I smile and say “Will you feed me please” miming to my mouth. Nuttin. I say something like “I want to put it in here and let it go here” miming both places. I didn't continue down the alimentary track for her. Sill the Sphinx. Finally I just walked over and took a seat. I still don't think she understood that I wanted dinner, because a different woman took over as soon as I sat down. Great avocado salad. So-so pizza.

Bed and morning. You know the morning flight combination as well as I do now. The taxi price was five dollars less going to the airport than coming from. Must have been shorter. We landed to a very organized cluster fuck. For some reason Immigration always wants to see your passport when you got on and off a plane. After immigration everyone from my plane just stood around with our mutual thumbs located in a non traditional area. Eventually I asked about the luggage and a vague that-a-way gesture. I went as directed and asked again and was told that the bags were outside the airport and my hotel was taking care of it. I'm thinking about the times that we have flying pigs. Somebody asked my hotel and took my luggage tag. Still no luggage in sight, I was ushered into a waiting full of German tourists and looked out the window anxiously for my currently worldly goods to appear. Appear they did, like magic. I was certain with all the chaos things would work out poorly. They obviously have done this in the past and have it down to “Swiss Watch” precision.

At the hotel I asked the manager if I could buy an upgrade from basic room ro beach front room. I was happy to pay the additional fee. Huge room, great view, BIG bed, I looked around the -property and then immedietly took a nap. After the nap I picked up one of the courtesy bikes. I chose the “girl's” step through bike because it had a handlebar basket, The mountain bikes did not have and storage of any sort.

The road is narrow. Two mini vans can barely meet oncoming, toss in a mix or motor bikes a bicycle maybe 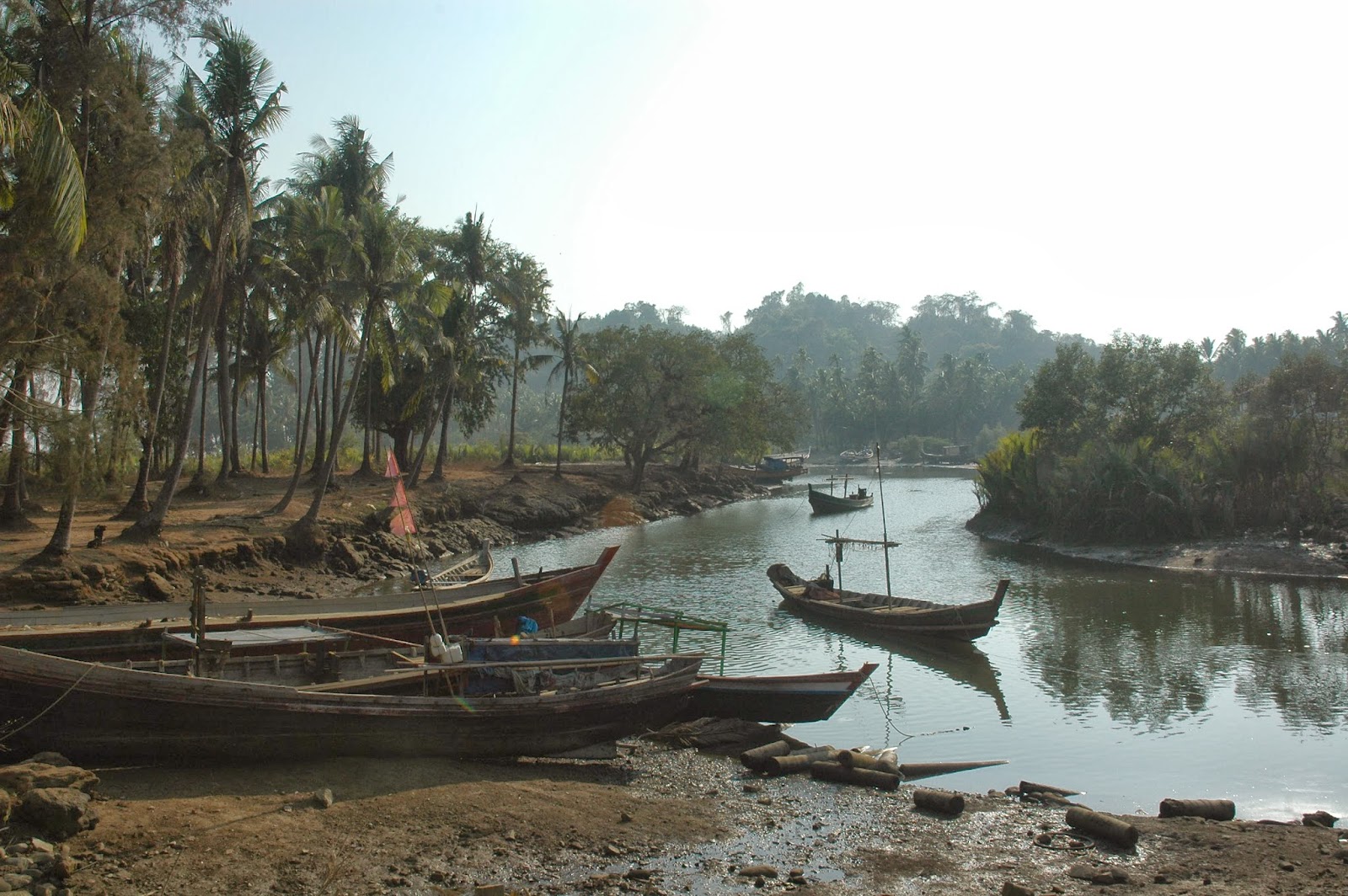 a trishaw and things get tight. Add a lot of construction, mostly by hand but the occasional large, very large dump truck or cement mixer and it scared the girl to death. I wanted to turn around and give the bike back but I do have me audience to inform and entertain (though they never write and they never call (Hint, hint)), so I made the sacrifice. The road wold be paved for a while then rough stones then sand then hard pack and then pavement again. All the time trucks are coming and going. Motor bikes are zooming past after a beep-beep of warning “I am here and I am passing you”. Once the deep baritone of a big truck would bellow and I'd head for the soft sand on the side of the road, Again controlled chaos. If you know the rules, Great. If not maybe an extra pair of scanties along wouldn't hurt. 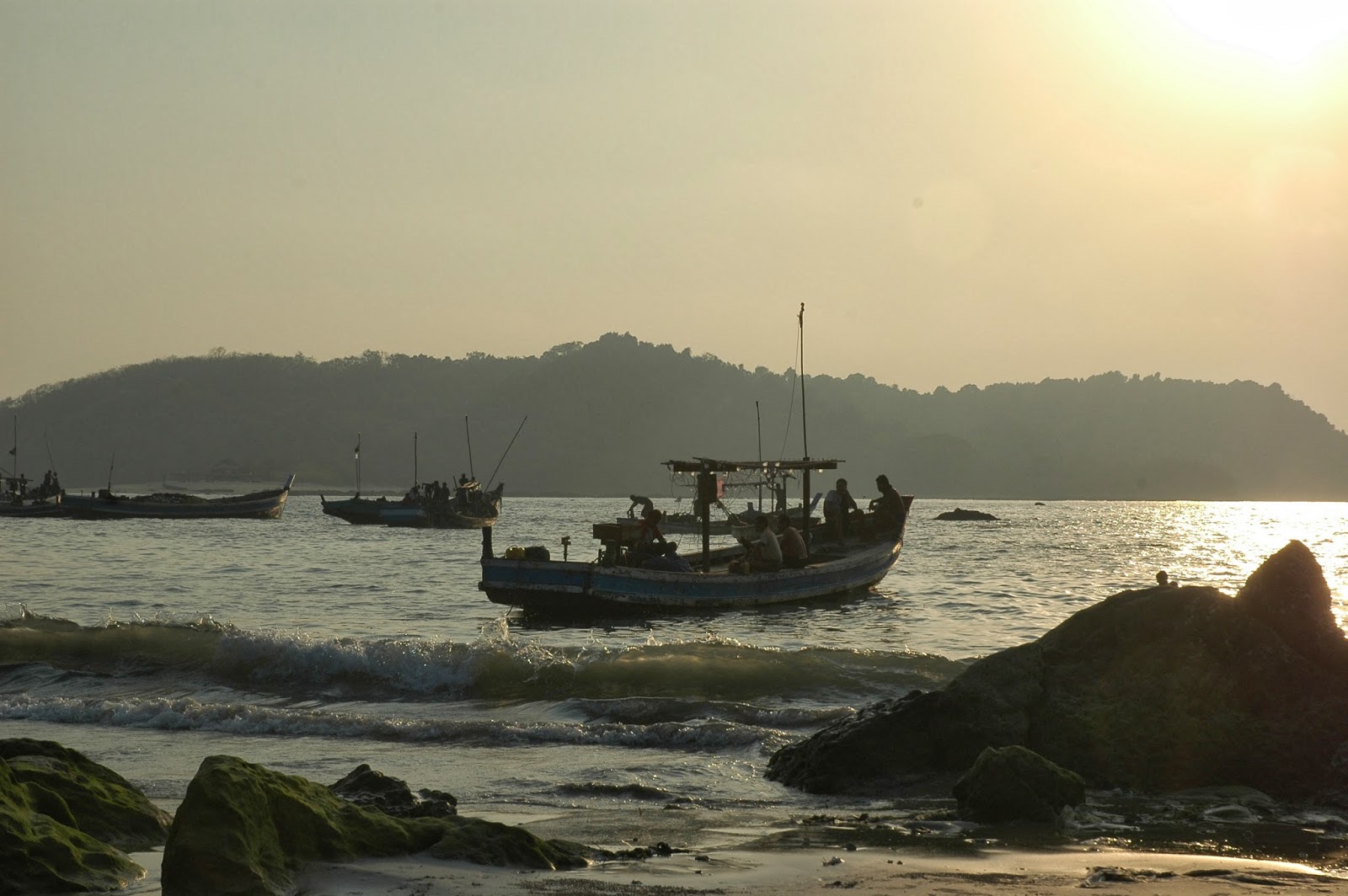 I pedaled until it looked like the road was going to be the same to Yangon (Rangoon) so I found a dirt track that looked like it might be heading to the beach and it didn't appear to be a path to someone's house. And started walking the bike down the lane. The path had never seen and probably never will see tarmac. Through the village amid the ducks and pigs. Waving to the men and mostly women sitting on their “stoops” a board in front of their houses. About two thirds of them initiating hellos in Burmese and nearly all the rest responding back to a nod. The road did end at the beach where small fish were laid on blue nets to dry and then at the end of the day shaken into piles and harvested. I took some late afternoon, early evening pictures of the boats in the harbor. I was told by the hotel manager to go a little further tomorrow around six a.m to see the boats come in. I kind of want to stay in bed, but duty calls. I turned around and found a cross path on the way back t the main road. As Yogi Bear says “When you come to a fork in the road, take it.” I took it. As a tourist you know you are in uncharted territory when a local stops and asks you if you are lost. My only question was if this road parallels the main road and another road crosses and leads to the main road. He assuaged my fears and I kept going.

A right turn and back at the main road, construction and all. The ride back was less harrowing and seemed shorter. Back at the hotel I dropped off the bike. Had a beer, moved pictures from the camera to the netbook and came to dinner. I suppose the next will be about early morning fishermen.

Posted by Dorothy Macaw at 3:33 PM