Today has been a not too much to report day.

Up at 4:30. Taxi to the airport at 6. Supposed to take an hour we made in by six forty. There were times I was wondering if we were going to make it at all. The driver looked my Chinese than Burmese - I'll let you fill in the rest of that stereotype. He would turn late going into the curves and then turn late coming out of them and having to over correct to get back on the straight and narrow. All the while exceeding the speed of the vehicles around him. It was bad enough that I started sniffing for the  scent of alcohol. But as is obvious we made it to the airport. Check in, get on the plane. The plane holds 72 passengers we were ten total. It appears it is past tourist season.

Taxi ride from the airport and the first hotel that was recommended to me by a Swiss an this morning at the hotel in Mandalay turned out to suit my style and then a little bit more. For half a Benjamin I have your basic bungalow with A/C, a beautiful shady pool and WiFi from my veranda. So far I am a very happy camper.

I kicked off my boots, jumped into  my sandals, reassembled my camera and unpacked Indiana Jones (my hat) and went exploring.

First stop was the covered market. It is completely a locals market except for the edges which are full of all 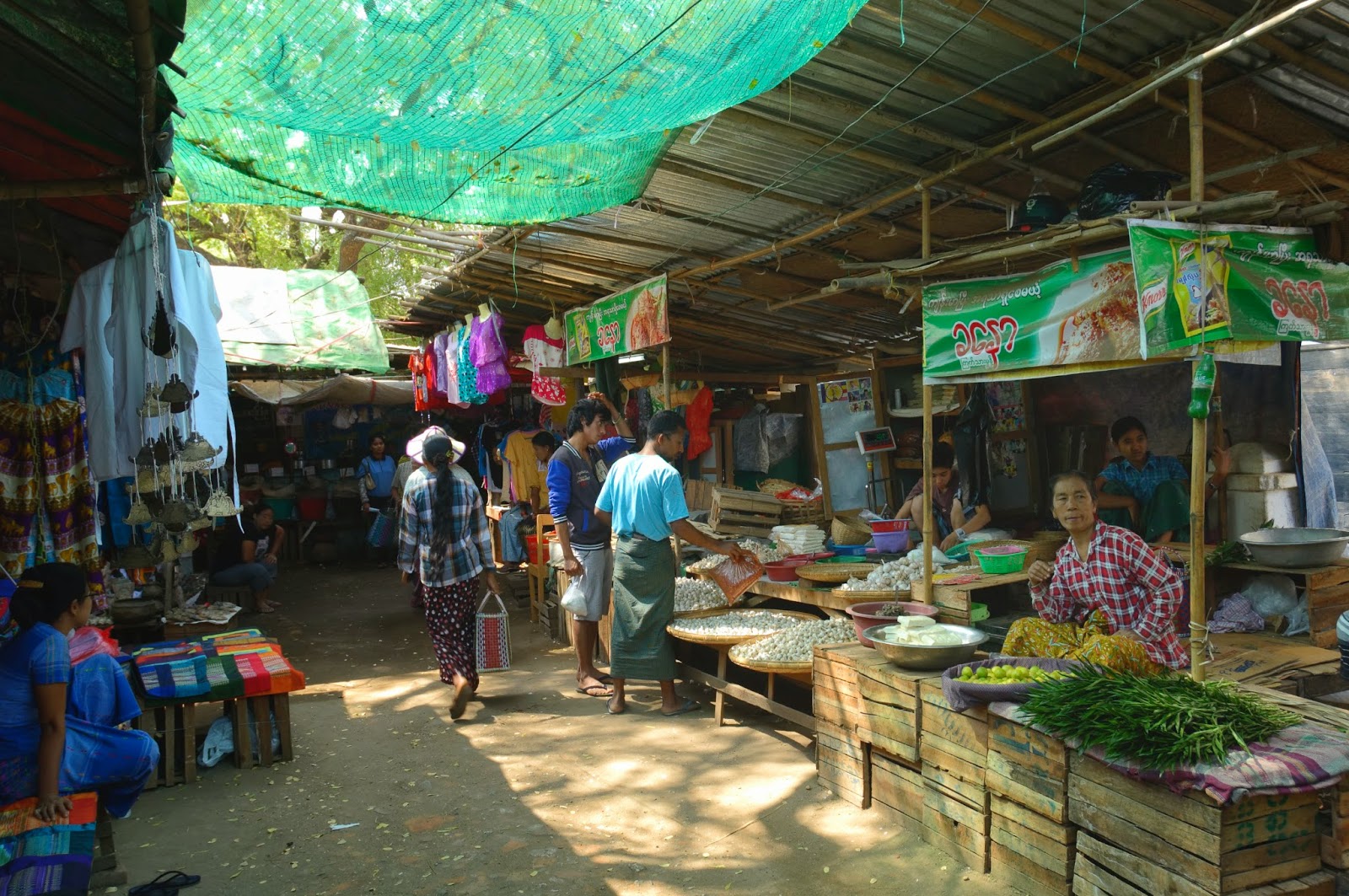 I left the market and started following the road on the map in Lonely Planet. I walked for thirty minutes and started seeing fewer and fewer tourist buses. I asked if I was on such and such road and the guy n the side of the road nodded enthusiastically. So I kept on keeping on. fifteen or twenty minutes later two guys on a motorbike pull over and ask me where I am going. -- Well you can see the punch line coming as well as I can. Maybe nodding your head is "No" here. Ok, how far ? Long ways -- 7 km. I did the math and heck I can walk 1.2 miles. The road is flat and it isn't too hot. About face ! Forrrworrrd March !

So not I have given up on the map and am pointing in the direction and saying "Old Bagan?". Now these responses were in the affirmative. I even generally asked twice. Walk, walk. No,, no bike thank you. No taxi thank you. I don't need a horse cart today, thank you. I keep looking  I don't see any cold drink stands or tour buses parked anyplace. I am beginning to wonder again. I stopped at a cafe to check. In English she confirms I am in the right direction. Just 20 more minutes. What ? You didn't rent a bicycle. You are walking ?!? It's .. uh .. er .. maybe one hour more ! -- An hour ?!??!? WTF, Over ? I can't be walking that slow. Lets see, here -- .62 Miles to a kilometer - times seven comes out to 42 plus change - move the decimal -- !!! FOUR AND A HALF MILES !!! No wonder the guys on the motor bike laughed at me.

Like an oasis in the desert under a tree seems to be a horse and cart. I approach it gingerly thinking it might be a mirage, but I don't think mirages snort when you get close. I did the universal thumbs up, thumbs down question and got a thumbs up. How much. About the same price as a "Full meal deal" at MacDonalds. Maybe a little more but not much more. To my destination and all the way back to my hotel. I was hot and sweaty enough to pay Olive Garden dinner and wine and desert for a horsey ride. 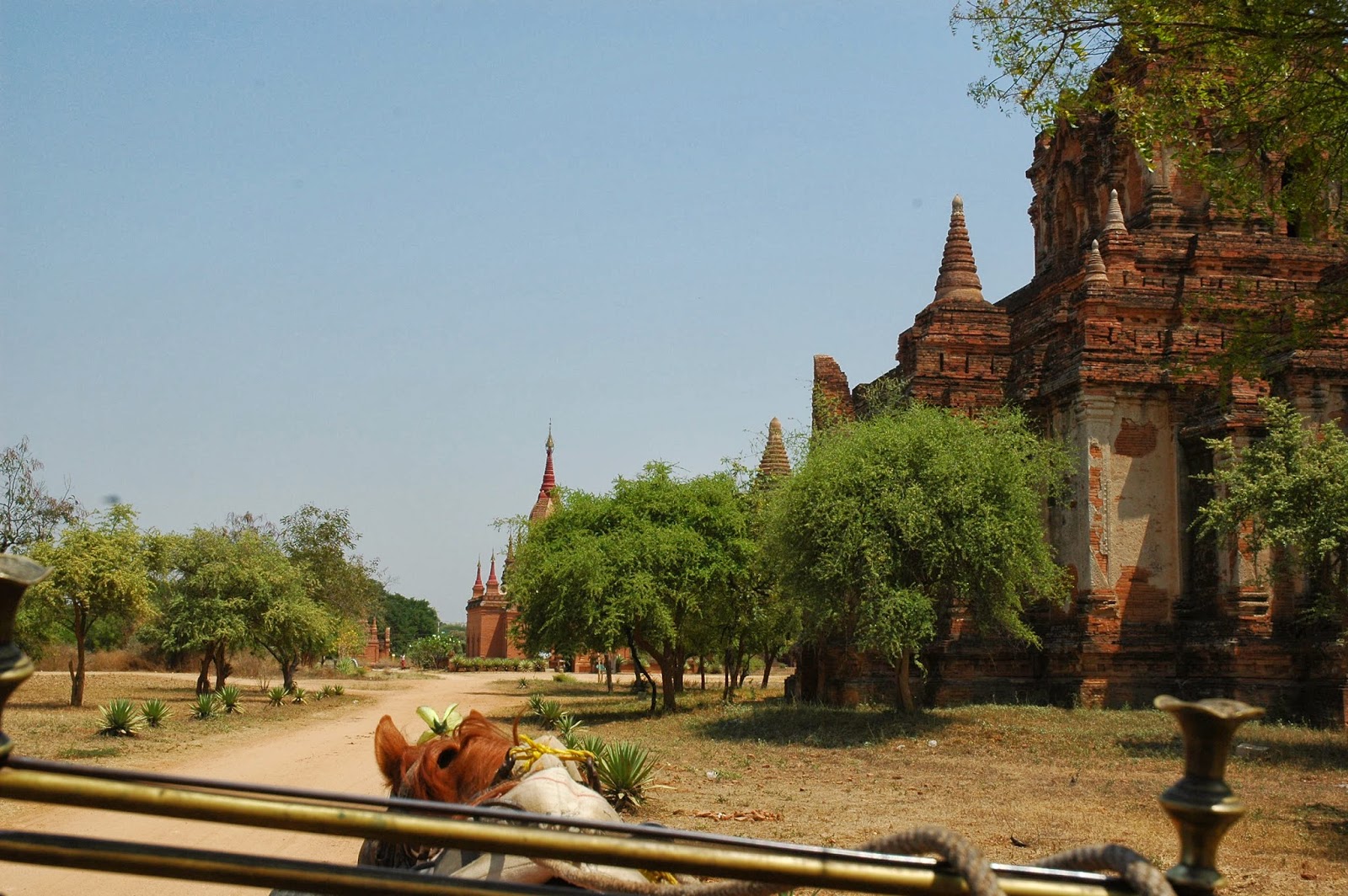 The guy was nice to his horse and the horse knew his job. I told him not much pagoda climbing today. More just to get the lay of the land. I am really glad that I made this trip. The temples are in a different style and setting than Angkor Wat but they are almost as impressive. We clip clopped to the hlfway point in the archeological area and I had him stop and bought myself, the driver and his son a soft drink in a can. I supported the big red can from Atlanta and they bought something that I am sure was much healthier. we moved on from there and I took a minimal amount of photos. It was jst getting to know the area day, not a full blown Nikon clicking, shoe removing day.

We went back the way I had come and it sure seemed shorter this time and he dropped me at my hotel and asked about tomorrow. I honestly hadn't thought that far in advance, but decided we would be a team tomorrow. Fair price, reasonably comfortable, nice guy, cute son. Sounded like a good combination to me.

I know I said this earlier but the people here are really friendly. Smiles and waves from the locals in the back of pick-up trucks just because. Nothing to prompt it, just plain friendly. I have been trying to pick up a little of the language. I have a close approximation of 'hello' and a pretty good 'good bye'. 'Thank you' is giving me a bit of a problem because it is about six or seven syllables. Maybe by Wednesday it will come and not leave me sounding like I just got off the boat.

There was one very unexpected encounter. A march of 0ver a hundred people all wearing t-shirts with "Change the 2008 constitution" written on the back and I assume the same in Burmese n the front were walking two abreast all around town. No chanting of slogans, just an orderly parade for lack of a better word. One woman caught my eye, smiled and waved. I waved back and gave her a thumbs up. She suddenly had a thousand watt smile.

So it is now around 4 p.m. I've been back for a while. No food since last night's dinner. I may put on my sandals and go foraging.

. A woman did show me a very common tourist purchase that I may get. Light white shirt that if you ran a stick through the arm holes and hung it, it would look like a capital T (Kimono). She said she had one in my size, but I am questioning that statement. I told her I would be back later to look at it closer and she immedietly dropped the price 30 percent. There must be quite a markup on it. If it fits - cool! If it doesn't I'll give it to someone back home and tell her I bought it just for her. She'll never know and I'll never tell.
Posted by Dorothy Macaw at 7:17 AM