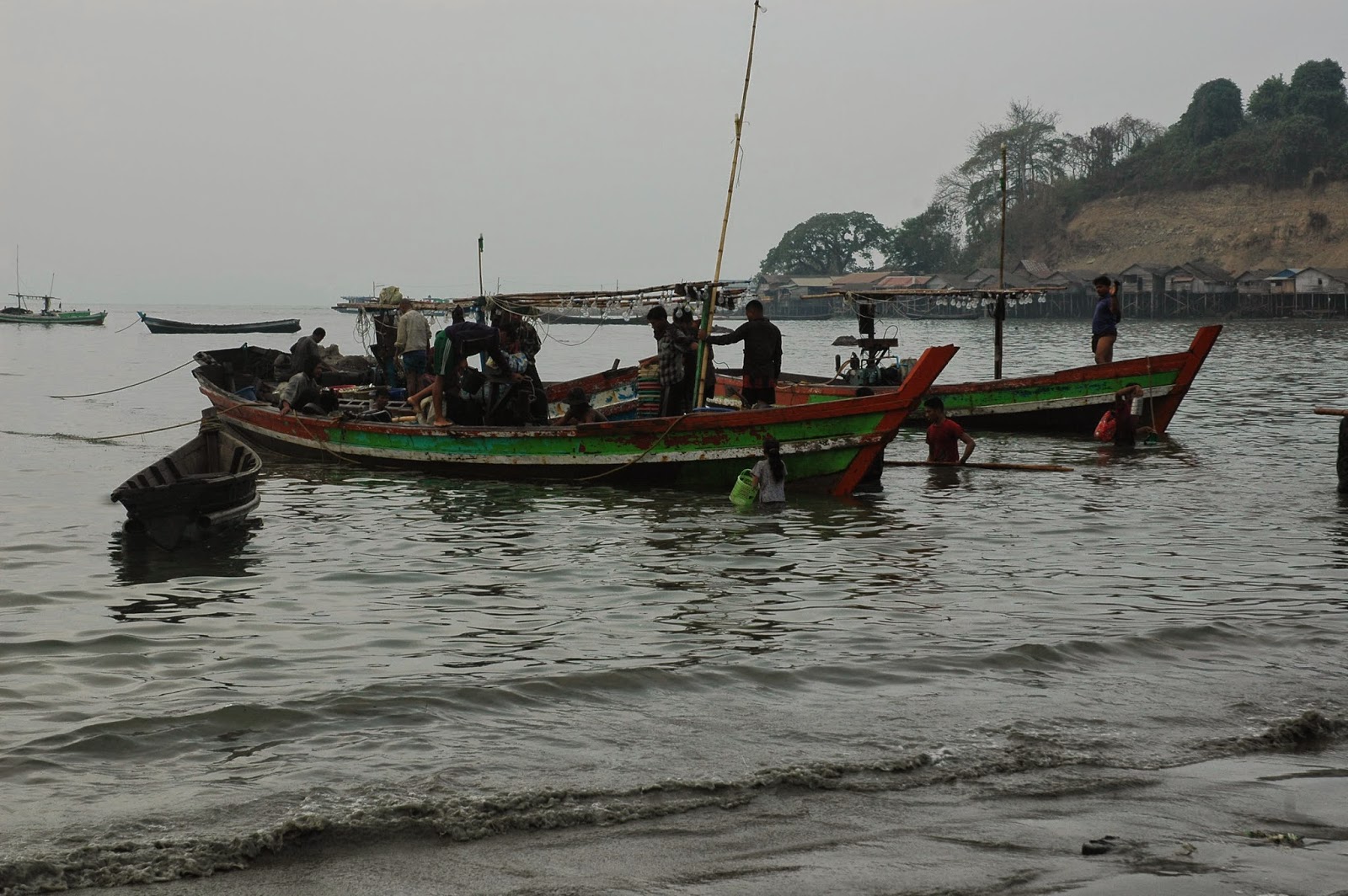 The hotel manager last evening suggested that I pedal on down to the end of the road today and catch the fishermen as they brought in the catch of the day as well as fish for drying to be the catch of some other day. His estimated time of departure should be around six a.m.. I set the iPod alarm to five and was showered and gone by quarter until six. What a very pleasant ride. No construction, no big trucks. The occasional car, but most of the vehicles on the road were of the two wheeled type. I know they get their fill of tourists but I was surprised by the number of people who said hello as I passed them.. The road was wide and generally flat. The road was also in well used condition. Meaning very bumpy in places and there isn't any cushion or springs in the bike that I had under me today.

About a week ago I quit buying cigarettes by the pack. I could see that I would be a hard core junkie by the time I went home. A pack a day was passing my lips in no time. I noticed in passing a store and restaurant that they sold single Myanmar cigarettes from an open pack. For a nickel (I got ripped off once for a dime) I can have a cigarette and still have some control. I was passing a roadside shack that had the fixing for Bettal leaves (the entire southeast Asia's drug of choice. Something that is wrapped in a leaf and then stuck between cheek and gum. It makes you spit a lot and makes your teeth really really bad at the gum line), they also generally sell cigarettes. I stopped the bike, put my foot out and my cuff caught the pedal and I crashed into the middle of the street flat on my back. Now that was a graceful move I hope not to repeat, but I did get my cigarette.

At the end of the road there was a breakwater partially encircling a very peaceful bay. Dozens of boats were pulled up close to shore and people with baskets and poles were wading out to the boats exchanging emptys for full and repeating this over and over. Nthe women on the shore would dump out the fish on the sand and start sorting. Most of the fish were sardine size and would be used for drying. Some were palm sized but not too many. I did see one little puffer fish in the mix as well. Ome woman was taking the fish and throwing them in the dirt and then covering them with dirt. I thought these were the rejects until I wanked through them and caught a dirty look. WHOOPS !! Sorry … I have not idea what kind of process she was doing. It looked like she was throwing them away. On the drying rack besides the fish were some really nice looking squid.

Then the town drunk found me. He was all talking in some English, some Burmese and a lot of Sot at a volume you could hear all over the beach. I tried to humor him and then tried avoiding him and then used one of my 5 words in Burmese. Go! And motioned away. None of the above worked. Finally I had to admit defeat and leave the area.

I walked the bike through the village amid a chorus of “Ming ula bah's” (Hello) and beauty pageant waves. If yoyu wave back with your fingers they interpret it to mean “Come here” a mistake I am making less and less, but am still not flawless at it. If they stared at me I smiled and almost without exception they smile back and said hello. The young pre schoolers were the best. They would almost wave their arm off and they yelled hello. Sometimes in Burmese, occasionally with an actual Hello. I was in the part of the village that most of the tourists overlook or just glimpse as they pass by in a vehicle. Walking the bike brought me to a pace where we both connected at some basic level. 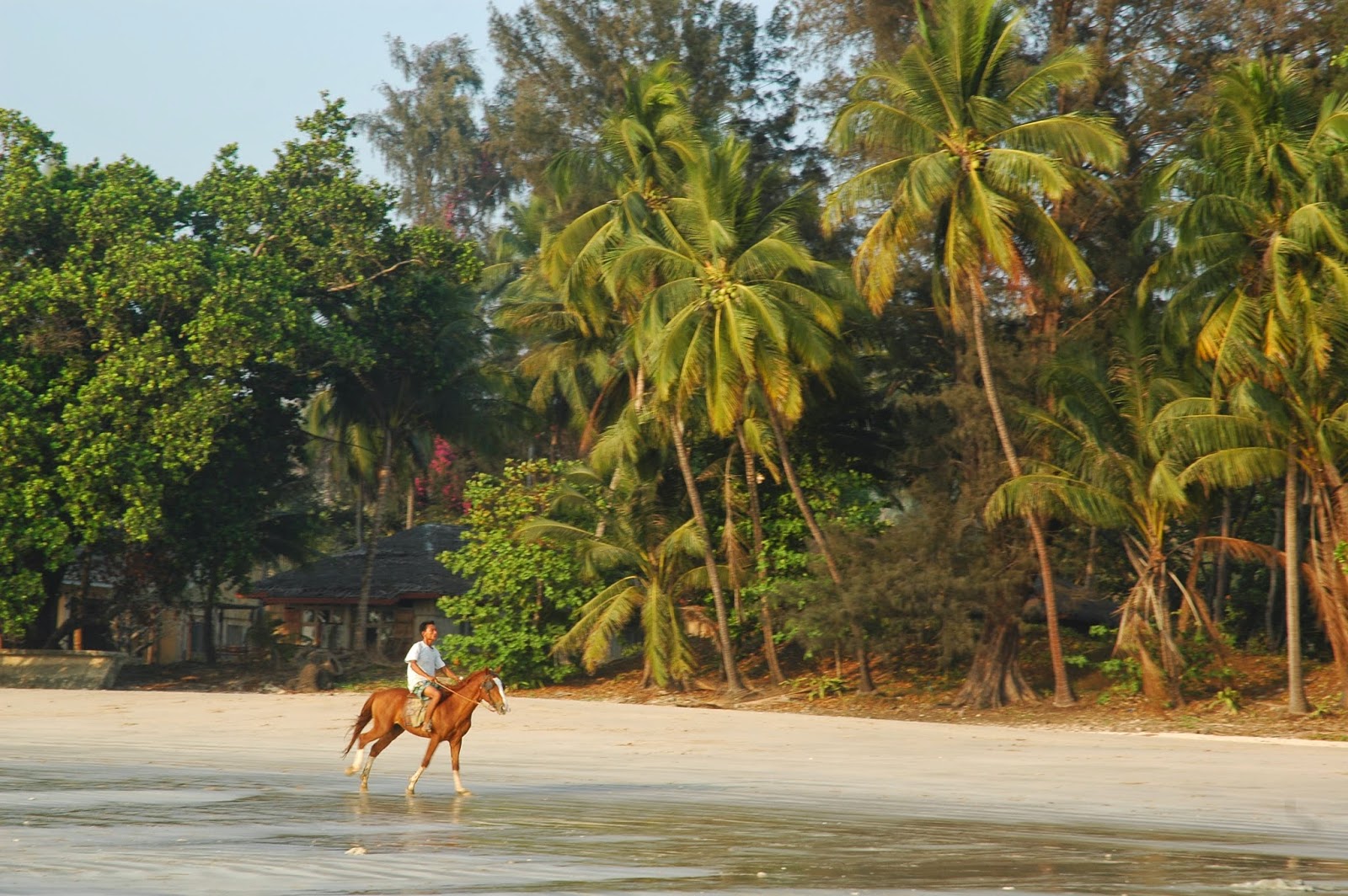 to the hotel. By now the rest of the world had awoken and the trucks and construction workers were back making my life interesting. Back at the hotel I had some breakfast, took another shower and just hung out in the room or on the veranda until late afternoon when I went for a walk on the beach. Walking along at the surf line with the waves washing over my feet and soaking the cuffs of my pants. I walked until I turned around and the sun was getting closer to the horizon.


When I was on the boat going to the worlds largest bell and unfinished stuppa there were two guys on the boat. They recognized me as we waited for different planes at Lake Inle airport. They recommended two places here. One the Green Umbrella for a drink on the beach and a different one for food. Both are little shacks on the beach with lounge chairs and umbrellas. They said to order the drink in the coconut. I took their advice and got a huge drink in a big coconut full of rum and real fruit juices with so much pulp my straw kept collapsing because it would clog with the fruit. Am excellent way to finish a long hot walk and watch the sunset. Now that is a good reason to watch the sunset. 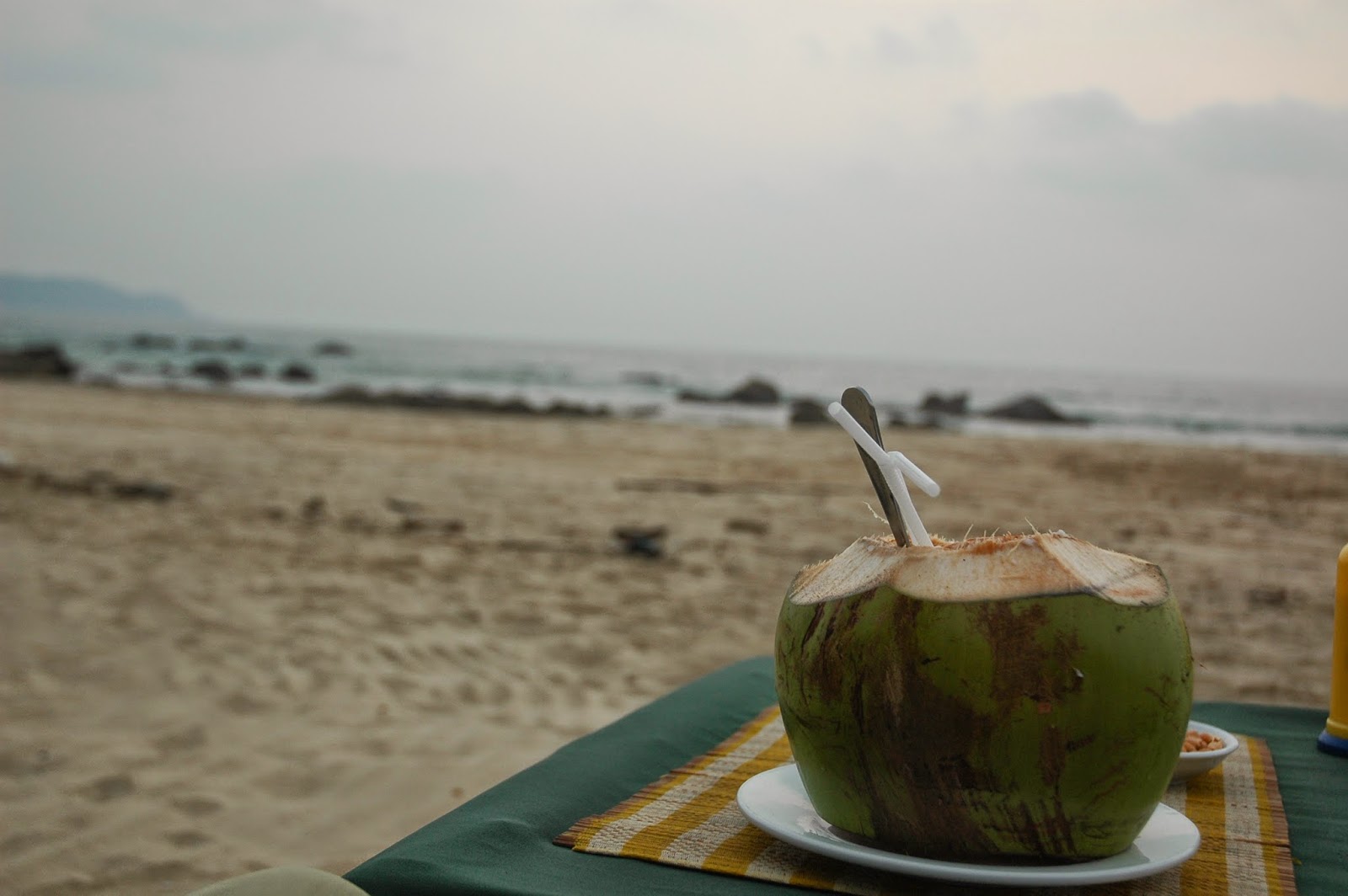 Posted by Dorothy Macaw at 4:02 PM