Going to the temple and we're going to get ....

Thursday and the banks are closed, how odd.

Last eve I took a walk to a different restaurant than the one where I caught the past WiFi signal. This was a little more local than tourist, but a step away from street food, which I am still leery of even though the only two times I have been sick were from eating in tourist oriented eateries. This one was lit outside with LED strings of lights and looked inviting. My stomach was making ugly faces from the anti malarial pill I had taken before leaving my hotel. I have to remember to take with food. I ordered a beer and looked at the menu. The prices seemed a little high but I was there and they were here, so go with it. I ordered soup, salad rice and a main of stir fried chicken and vegetables. The waiter said it might be too much and the way my stomach was feeling I agreed. Nix the soup. The salad of tomatoes, onions and cumber was really good, but just a little and see how it goes. With 'goes' being the operative word in that sentence. The rice was a nice cup full but the protein of the meal was huge. The waiter said it was a single serving when I ordered. Ya, a single family. I ate half of everything, but I did drink all the beer. I motioned for the check and the waiter came by looked and walked away. Then some lady came and looked and walked away. Then the manager or owner came over. “What is wrong with the food?”. “Nothing it is just too big.” He understood, wrote the bill up and charged me five bucks. I did glance out the open kitchen door into the cooking area. I might call it a kitchen but you wouldn't probably. It wasn't a room, just burners set up outside the back of the restaurant. I'll go back tonight. 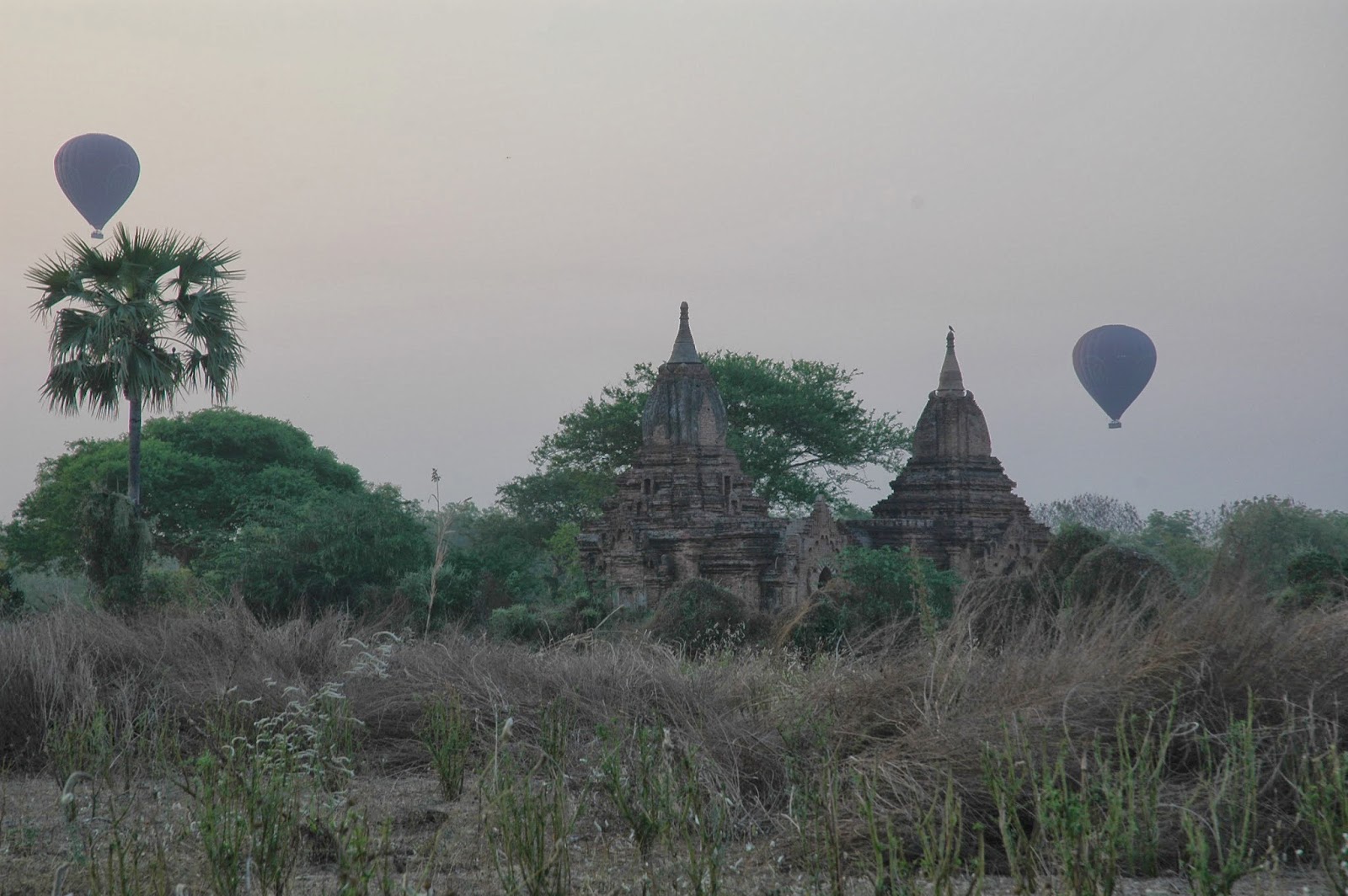 This morning was meet the horse cart at 6 a.m. For sunrise at the temples. I don't know what it about the sun they think I need to see it pop out of the ground or fall into the river. Whatever. That was the time he set. We clipped in the dark to temple/pagoda/building he said for me to climb. I finally found the stairs inside and they were totally back and I hadn't thought to bring a flashlight. I stayed slightly elevated and took the morning pictures. All I wanted was the 'golden hour' after the sun came up. It was a very nice sight and I am glad I went. As the sun was brightening the morning the hot air balloons were rising. It made a very pretty scene.

Then off to some pagoda/temple crawling and to the new town New Bagan. In the 1990's the government 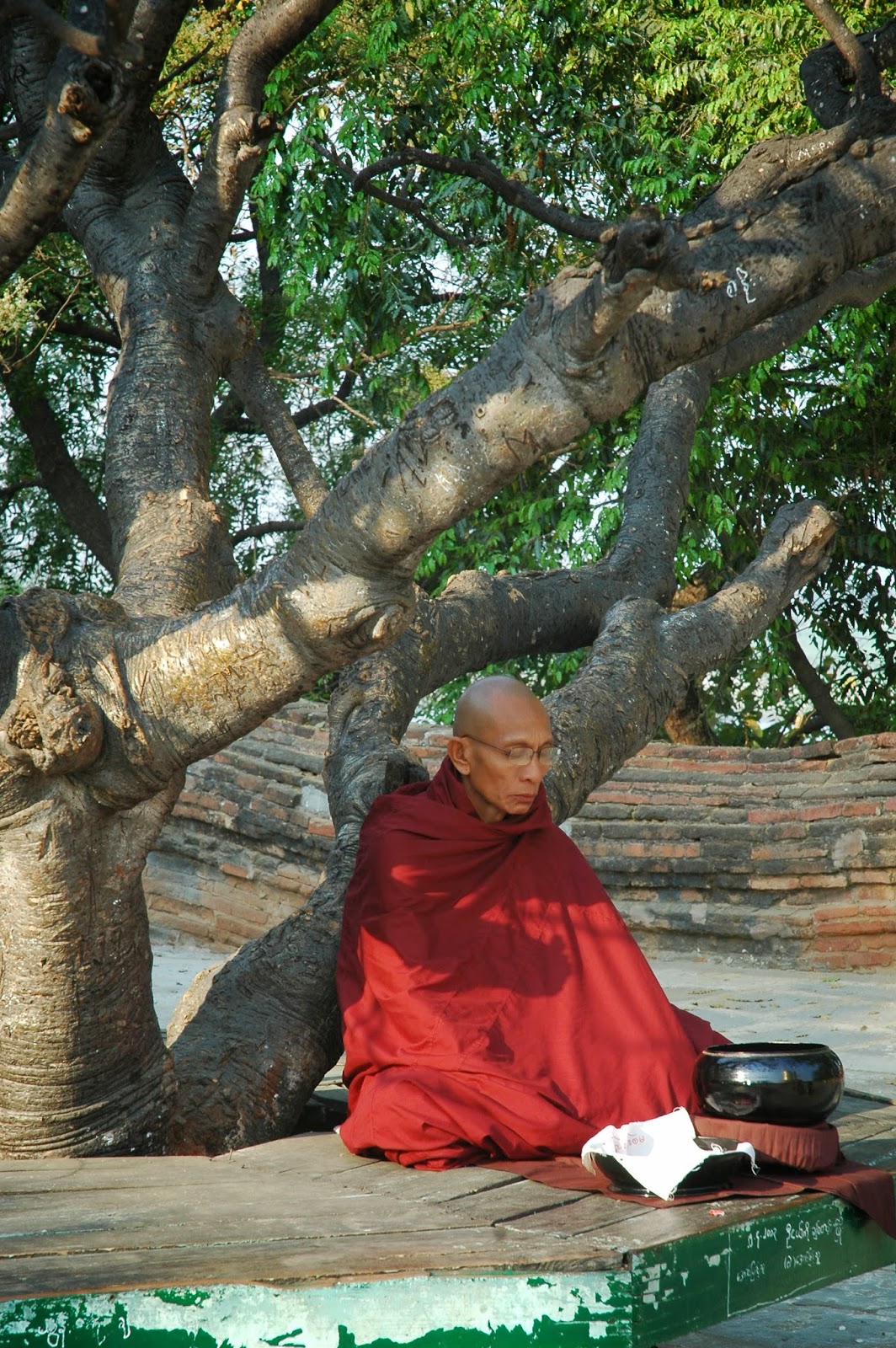 moved the population from living among the temples to a town outside the national park. It was a nice town, lots of trees and greenery on the riverside. Next stop was a new golden temple that was jammed packed with tourists and no white faces among them. I circled the stupa and took some pictures and reboarded my ride.

The reason I think is today is a holiday. This morning on the way to sunrise I saw a group of ten women in traditional dress eating breakfast. They were wearing the dresses with lots of gold embroidery and the hats that go around your head and have a golden spike at the top. On our way to the next sight we came along a large parade of people half in similar dress for both men and women and a motorized paladin carrying the guests of honor. This was their send off to join the monkhood. Vows taken today, a large feast tomorrow and off to red robes and rice bowls for as long as they stay monks. (Monkhood is kind of fluid. Go, leave, come back as you need/want to) My camera sounded like a cicada as the shutter opened and closed. Then it stopped. Dead battery. The meter on my camera is like some gas gauges. Shows full until suddenly it falls off quickly. Of course no back up. I was forced to look at this marvel with my own eyes and not through a view finder. Oh ! The humanity ! 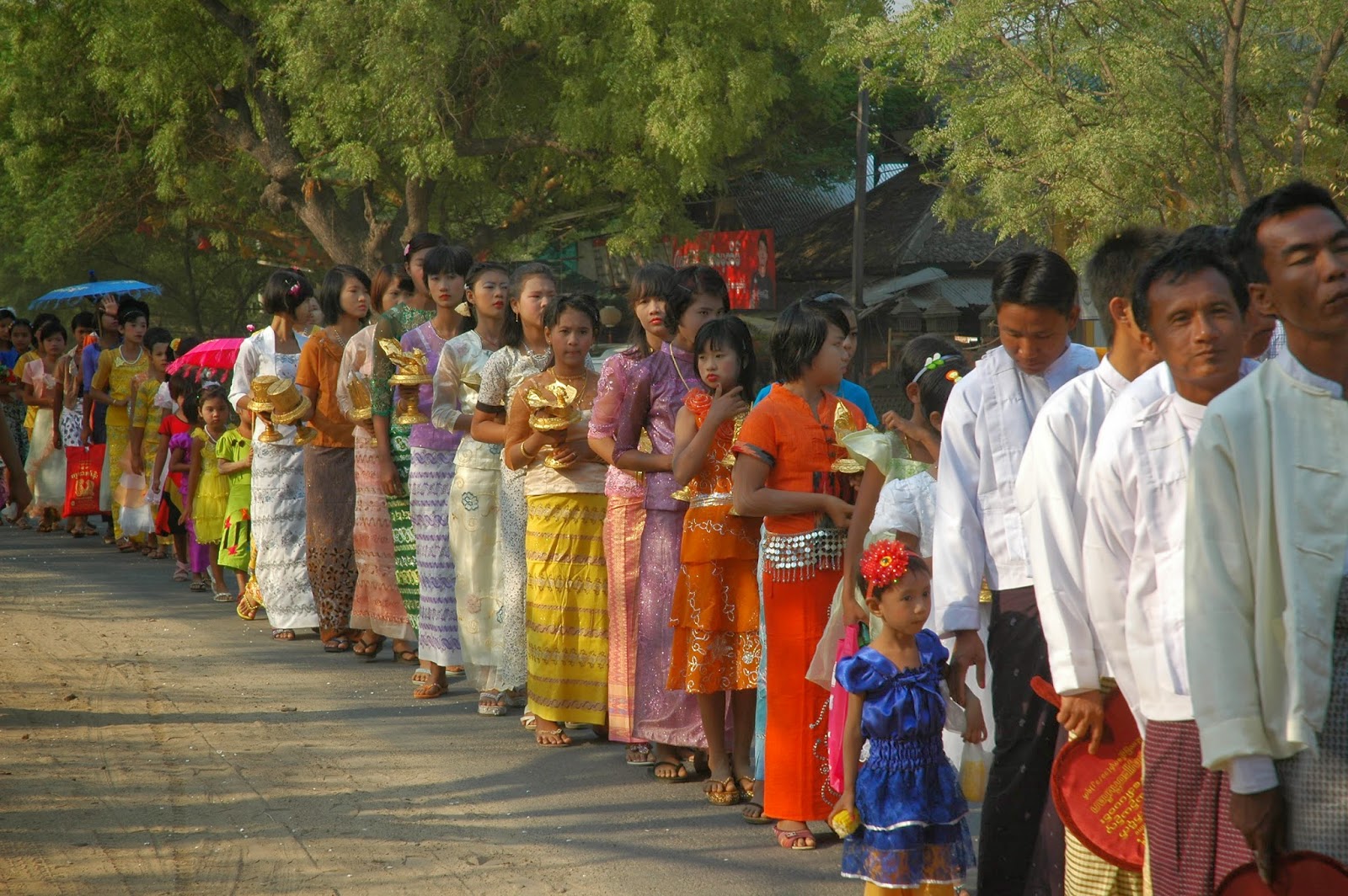 After a couple more temples it was back to town where we ran into another parade. This one Bobo said were for rich people. I asked how he knew this and he said “They have an elephant” There was a walking mountain draped in reds and golds coming towards us. A camera would have been nice, but just seeing it was special enough. Behind the elephant were two ox carts drawn by two equally fancy garb. Quite a scene.

Back at the hotel by ten a.m.

I got the bad news that the plane for the 29th would have a long layover in Mandalay, while the one tomorrow would be there only long enough to discharge passengers and take on fuel before going on to my destination, Lake Innle. I kind of wanted to see Mount Popa but it is time to move on since time in country is getting shorter. So the bird flies at 7:30 and lands finally at 9:30. Hopefully time to find a hotel before too late in the day.

A power nap full of odd dreams while the young nubile bodies froliced in the pool. A walt to the local water station and back to meet Bobo and son around 4:00. Mostly just some easy fresco laden temples. At one a sales man told me the story of this minor temple. A the head monk of the Monistary was paying tribute to the king and his funds ran out the king demanded what the monk didn't have and when he couldn't come across the king had him blinded. Since he could no longer see to write the tablets any longer the people took the ones that were written on and tossed them into the toilet for safe keeping. Eventually this king died and the people dug up the tablets and wanted the monk to write more. The monk said he could with the magic stone and new eyes. The people went to the market and brought back one goat eye and one cow eye. How the cow eye fit is beyond me. Once the eyes were in place the magic stone came into play and everybody was happy except for the bad dead king. – of course the tale came with the obligatory viewing of his wares which I bought some of just because of the good story.

We stopped at a couple more places, but honestly the sun was heavily filtered and not suitable for the photos I wanted to get and I didn't know how to make lemonade out of lemons. So I mostly asked Bobo about things. He was alive and living here in '75 for the last earthquake. Happened around dinner time and as thibgs began to move mom said hang on it is going to get bumpy. I don't know if they knew what was going on, probably so, but everyone in the village started banging their fire bell. No deaths were reported in the area, but most of the pagodas and temples sustained damage. The only to survive intact is the one in yesterdays picture with the gold stupa and the birds flying through the picture.

His family is a family of cart drivers going back at least four generations. I asked jim if his grandfather ever told him about when the Japanese occupied the country. He said that his grand dad remembers a lot of Japanese and British and Indian fighting each other. Many were killed, but he didn't know what it was all about. He said No. they weren't/aren't allowed firearms, only sling shots and knives. He doubted they would be very effective in world war two..He did say numerous Buddha statures lost their heads for some reason the plunderers thought there was gold and jewels inside.

Atop one of the temples that you are allowed to climb there were hundreds of people one top watching the sunset. Bobo said they were mostly Myanmar people. I asked him why and he said it was 3 month summer vacation for school. Next month is the Water Festival then New Years and then back to school for today's co-pilot. Back to monk school, not to become a monk, but taught by monks. In Mandalay I ad seen a boy get tapped rather sharply on the top of his head for messing around. I told him that the Christian nuns had a rep for smacking palms with rulers. He told me that in school if you don't do your lessons the first time is a warning. Second stronger warning. Third “How many lashes with the cane do you want ? One – two or three ?”. – “Noooo I don't think only one is enough I think three is right. But I will split the difference with you at two.”. Interesting learning tool, especially the higher math involved in figuring out how many lashes are deserved.

We rode back to the hotel. Good wishes and appreciated thanks given on both sides. I made an instant pit stop, changed shoes and walked back to last eve's restaurant with a replay of the previous meal only spicy and sour chicken which is pretty darned good. Then back to my abode, pack and get to bed.

Posted by Dorothy Macaw at 2:30 AM