Back at the hotel and ready for bed and a shower. Maybe not in that order. I have seen enough pagodas to last a very long time. Some interesting, some supposedly interesting and some totally lost on me as to why they are on the list. Some are the equivalent of seeing a city's cathedral, some are more like going to the local church.

A few things they all have in common is that shoes and socks are totally forbidden. That is understandable given the culture and the level of dirt and dust. The nicely polished marble of tile floors would be as dull as a Lutheran church service in a heartbeat. This is all well and good since for the most part the floors are immaculately clean. But (isn't there always a but ?) anytime after say 11 am the floors getting to and from the shrine itself turn into cooking griddles. My poor western feet ate not quite tough enough to handle this without my walking to a chorus of my making of "Ooh, Ooh, Ooh!" while doing some type of hop from foot ro foot as I try to forget that I have to go back too.

Once you are safely passed the "Ooh, Ooh" you are greeted with a nice square room with perhaps a little carpeting, several boxes to collect donations and Buddha himself all white with gold trim. But the statue is not the first thing I notice. What I notice is rays radiating from behind his head of multi hued flashing LED lights. I am not exaggerating this. It really sets my teeth on edge. It is as incongruous to me as a bikini at Mass. I know it is not my religion, but it still hits a bad note in my melody.

Surprisingly I slept pretty good considering that the road in front of the hotel has two eateries that seem to be favored by all the motor bikes in town. I woke at what I thought was five but turned out to be 4:30. Get showered and such. Had breakfast and still had an hour to kill before the taxi arrived. So I went for a wander. Monks walking by with their rice bowls, at 5 a.m. and the city in full open for business mode by seven. The sidewalks solid with people selling meat and produce. Lots of fish what were weighed on a balance scale and then cleaned before being wrapped in paper. Vegetables enough to make a vegan fat. Onions garlic, tomatoes, okra, beans and fruit. Many varieties I have know idea of what they were or how they might be prepared. Severl smiles were exchanged between sellers and myself and some not smiles too. 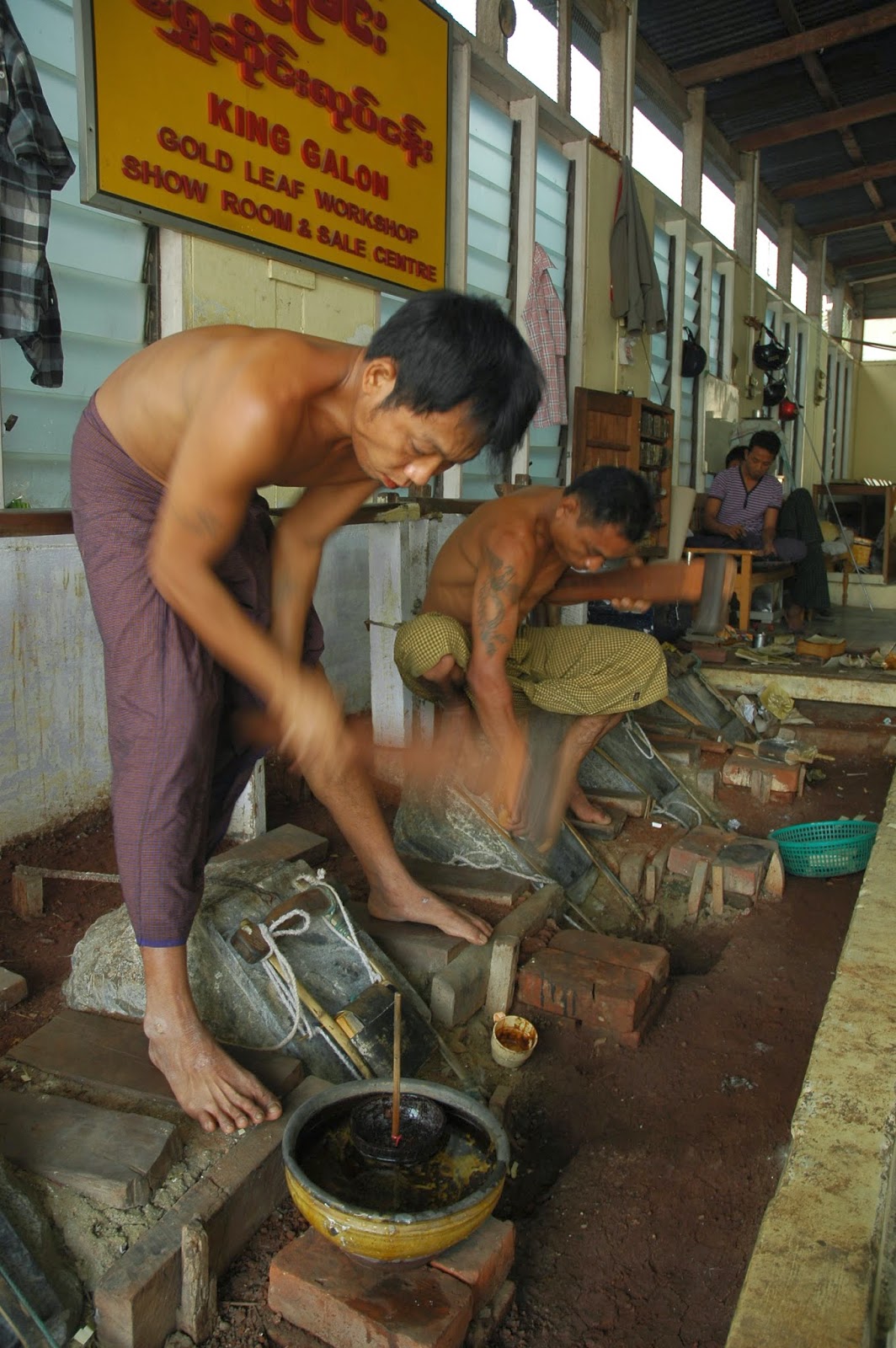 I met the taxi at the appointed hour and we were off to the gold market first. That was interesting. They take a paper thin postage stamp sized piece of gold. Sandwich it with bamboo paper and a bunch of other pieces, wrap it in leather and beat the heck out of it for half and hour. Then they do it again after cutting it into sixths. And Yet again but this time for 5 hours.. Eventually they get a piece of gold so thin that if you blow lightly on it it will fly away. I'm talking less of a blow that would flicker a candle. I bought 10 sheets for $3. So everyone back home is getting GOLD ! I feel like Oprah.


The main reason for this process is so that you can stick it on Buddha. Well you can if you have a penis. If you don't have a penis - no dice, sister. Even when you are a guy, you have to stick it on him with your right hand. The left won't do at all. That is because the man has the power and his power is focused in his right arm. The right is so dominant that men have to sleep on the right side of the bed. I guess they are lucky that men don't have two penis or one would not get any use at all. Let's see what else, besides girls have cooties and periods. No Buddha time on your period of course. AND, men only need to shower weekly, women need to bathe daily because otherwise they stink. Christ on a crutch ! Maybe I should have said "Buddha on a pogo stick".

The next stop was a embroidery and wood carving place. Nothing new there.

Afterwards it was monk feeding time. I am not putting you on. We went to a monistary and got there around nine forty-five because the monks ate at 10:15. The way through the complex was just that - complex. A wandering monk took pity on me and escorted me to the dining area. We had a short chat. He had been to the U.S.A. in the mid 1980's, well Los Angeles if you can call that part of the states. That was a nice, short interlude. 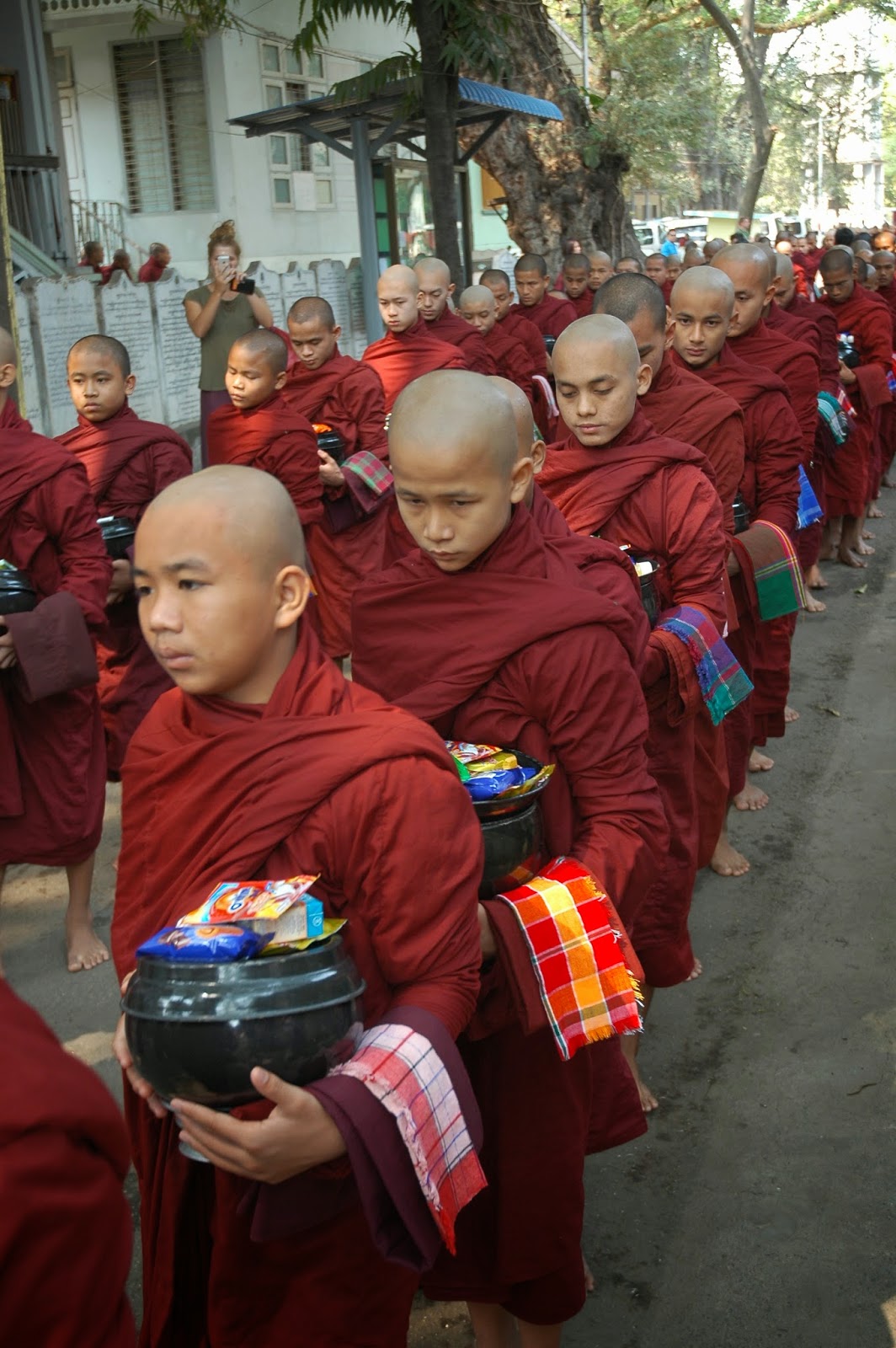 At ten a gong in a clock tower rang and like soldiers they lined up two abreast down the block. Each carrying a rice bowl and cloth to sit on. A long line of shaved heads wrapped in red. By ten fifteen the line was two blocks long and they kept coming. (1200 in total the monk told me). All this time the sidewalks were getting denser and denser packed with my brother and sisters of the Grand order of the Nikon. At precisely ten fifteen a monk hit a hanging railroad rail with a metal hammer and the slow march through the throng began. As they passed through the gauntlet people began placing wrapped candies and other goodies on their covered rice bowls. Silent except for the incessant click of camera shutters. Mine included. I would like to be and sometimes think of myself as reverent, but when it comes to a crowd and a spectical I am as heathen as the rest. 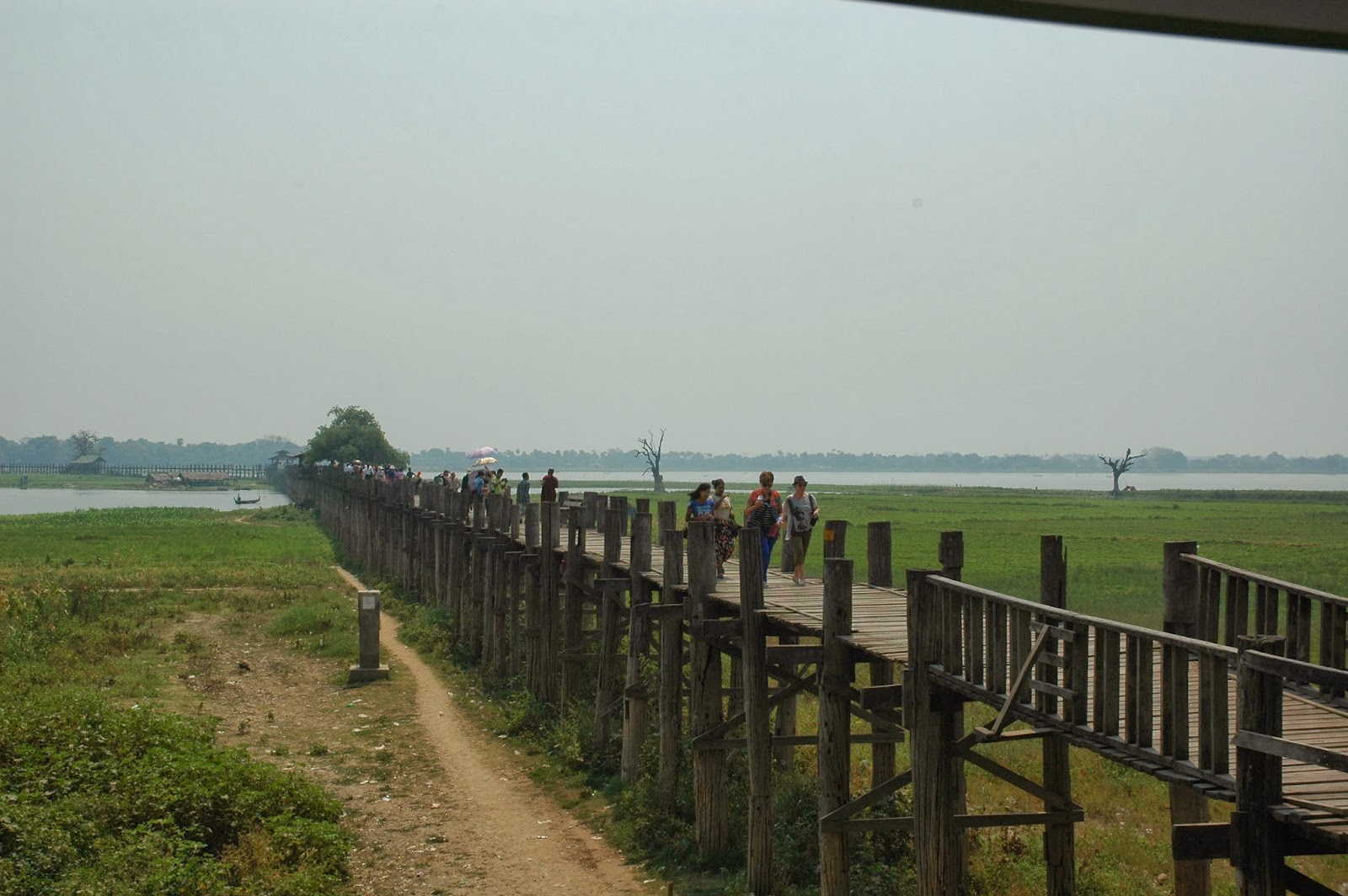 I broke off before the end of the line and sauntered through the postcard and knick knack vendors to the world's longest teak bridge. It is the most photographed bridge in Myanmar. Possibly only second to the Golden Gate .. maybe not. Rows and rows of stilts going on for a kilometer or more. The light for photography was poor by this time so I made a few snapshots, but nothing that I would expect to come out os a photograph. I think a six thirty or seven a.m. photo would be ideal. I was tempted to cross the bridge, but there was just more sales men/women there and another pagoda that sounded minnorly interesting, but not an hour walk round trip at noon in March. I walked under the bridge to get closer to the water. It is the dry season and so the water is low and a photo of a bridge crossing a bunch of gardens is not as photogenic as having water under it.

Ar one point I heard some ducks quacking and looked over to see a man in his boat herding his flock ? Covey ? Coven ? of ducks with the boat. Once he got them in a crowd he herded them up onto the levee and someone was waiting to herd them along dry land to wherever ducks go after the spa.

Then it was off in Inwa. A former royal city. First a ferry crossing in a over sized long tail boat with a huge truck engine. Then a small climb up the river bank and back into trinkets, postcards and any number of things for sale. The vendors are nice, but they are persistent. About as persistent as I can recall anywhere.

The traditional tourist way around the former royal city is by horse drawn cart. I knew the price was fixed at 6000 (about 6 dollars). One of the cart salesmen pointed to the sign "2 persons 6000. 3 persons 9000" I handed him 3000 since I was alone. That drew a laugh from a few of the locals, but not the salesman. He got his full fare and w4e were away. Rough, bumpy, tossed from side to side. Not camel bad, but a close second.

More pagodas, but not much else to show there was ever a city there much less a royal one. I don't know if the marble and such was carted off to other uses or if the city was wood and it just disappeared over the years. Now it was mostly farm land with the occasional pagoda. It was a nice ride and a fun experience, but that
was all it was - an experience.

I'm starting to really drag and the next top on the tourist train is a 400 foot climb up a steep stairway at 2 p.m. in 95 degree heat to see another pagoda. I called it quits. UNCLE! I've has all the fun I can stand. Back to the hotel, James.

p.s. Sorry for the spelling errors .. I was very tired
Posted by Dorothy Macaw at 8:13 AM