Last day in Mandalay. Tomorrow I fly to Bagan. I was wobbling between the plane or the boat. The boat leaves around 8 am and gets into Bagan around 4 or 5.  The plane leaves at 8 a.m. and gets there whenever it gets there, but certainly before the boat does. There was only a 20 or twenty-five dollar difference and it gives me a half day more there. It is just too early in the trip to want to have a day where I just lay around watching the world float by.

Today was a pretty darned good day. Up to before daylight, even before that yelling guy in the tower started hollering about Allah. Out on the street to watch the monks walk to either work or breakfast. I think probably the latter, because even monks have to eat. I stood on the corner and watched the dumpling/chapatta guy make his dough (not money kind - the other kind). That was quite a process. Especially since there was not a machine involved in any way. Then he tossed them into hot oil and left them in for much longer that I thought necessary, but he was the pro in this scenario. Around the time he was getting things in the oil the street side venders were setting out their blankets and putting out flowers or vegetables out for the day's trade. It was just starting to lighten so I went back to my room and did my morning stuff.

We got to the ferry dock fifteen minutes before sailing to Mingun. The location of the world's largest uncracked bell and what would have been the world's largest stupa. But as things like that happen the king died and his successor said to hell with it and stopped., to go and find a way to spend his subject's money differently.

These were 30 minutes up river on the tourist ferry. Our chairs were on the open deck and I spent about half the time talking to my seat mate. It passed the time, but no new horizons or knowledge exchanged. At five a.m. I could feel a wind out of the east. Moving air ? I sense a change in the weather. It sprinkled a little on the way there. A dozen warm raindrops and everyone was throwing coverings over their heads. I put my hat over my camera. It was nice.  I don't think it lasted 5 minutes. Pikers !

The ox cart drivers were waiting for us.  I had to do it even though the area was smaller and mostly level and with the moisture in the air really really cool and pleasant. This trip - plane, motorbike, taxi, boat, horsecart and now oxen. I wonder what is next? Hot air balloon ? Train ? I haven't seen any camels or elephants yet. I hopped in one and  we followed along behind the ox train of the rest of the tourists. 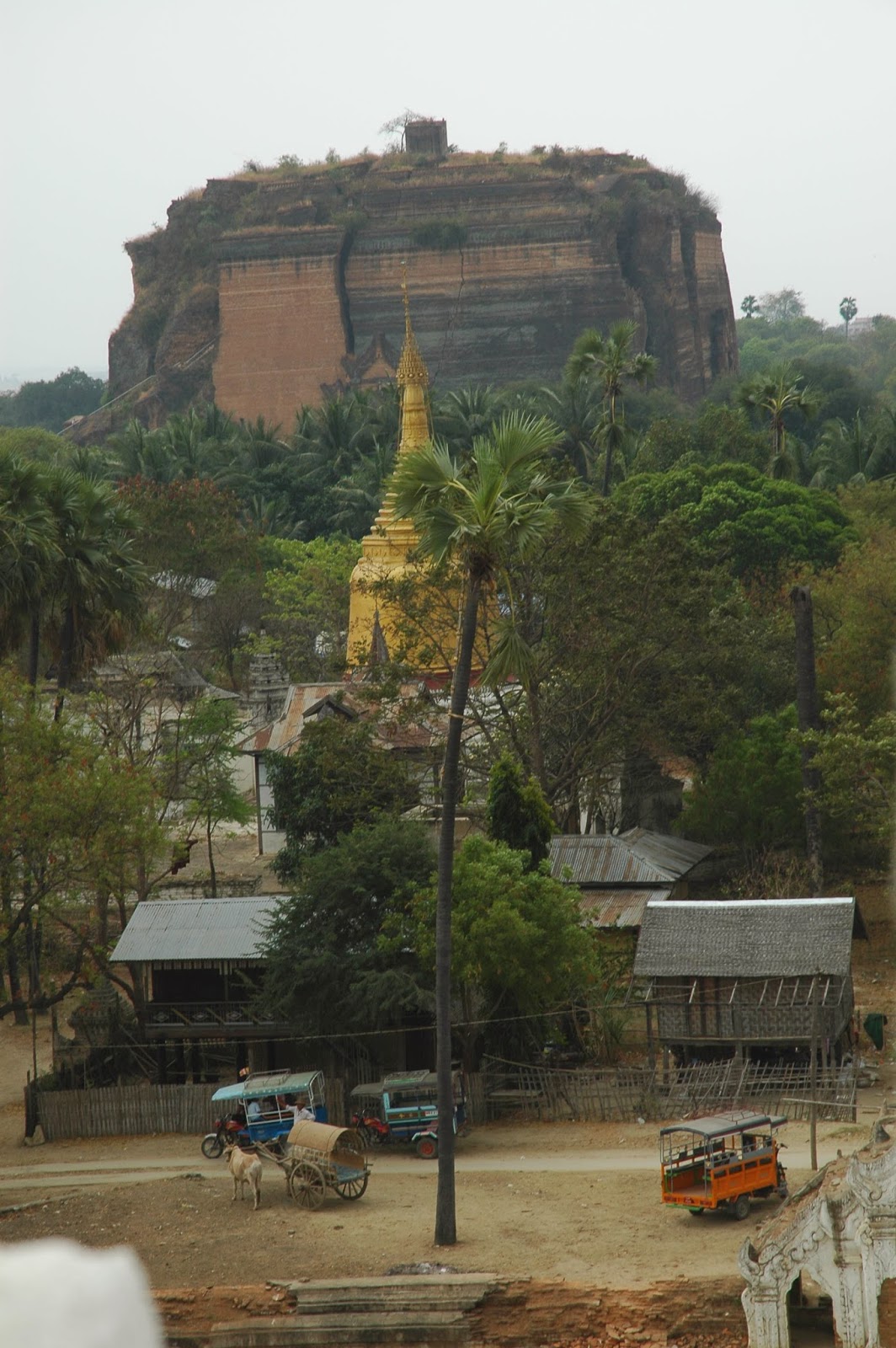 That unfinished stupa is really huge and only one third completed. Most of the tour buses freight headed up the main steps and into the front door. I and a couple of other ferry passengers started walking around it.  I was impressed. It would have been quite a sight, though the corners are scarred deeply due to the earthquake in the 1800's. I am questioning whether it would have survived that quake if it had been finished. Maybe it fared better because of the earthquake. I climbed the front steps to find a bathroom sized  niche with a Buddha and the required LED lights. I could have skipped the stairs and been able to keep my shoes on and not missed a thing.

There was another pagoda that I can't remember, so it must have unremarkable, even though
I did just remark on it.  Last on the stop was a very very pretty white pagoda built in seven levels with the pagoda at the top signifying Mount Menru (?) It was really cool looking. Back at the ox cart I paid off the driver and took to foot for the way back.  I had an hour and a half to slowly walk back t the boat for the return. I walked really slowly. I even found a European toilet ! and got back to the boat landing with an hour to spare.  :(  Another boat passenger walked over and asked me the time. He was about to return to the vilage and decided to stay and chat. He was a memorable chatter.  a flight attendant for KLM who had already been in Myanmar for about 3 weeks. He had lively topics and a few flight attendant stories as well as sever do's and don'ts for my next stop. He even recommended a hotel in Bagan. For me it was a very worthwhile interlude.

The taxi was waiting for me at the landing and we made a quick stop to pick up my plane ticket before hitting the jade market. I was expecting a brightly lit neon palace where artisans worked before you and then had you exit through the gift shop. I was glad I was wrong. I was there for 30 minutes and didn't see a single western face the entire time. A storl down an alley where young men and a few older - operated foot driven wheels and polishes the jade into ovals suitable for jewelry. then into the sales area that was clearly marked "Foreigners 1000 Khat" I reached into my pocket to pull out the bill and one of the men standing around just waved me through. This was the heartbeat of the market. This is where the raw jade is bought ay buyers sitting at wooden tables with high intensity flashlights to judge the quality of the raw stone. A little deeper were the actual gem buyers and sellers. Table after table of little paper packets filled with gem stones ready for setting.  Some laid out by size some but color and some by both.

I left and walked back past the cutting and polishing area and sat down to smoke a cigarette. Two little boys were sitting across the lane from me preparing the tools for the artisans. The older of the two (maybe 8 years old) mimed me giving him a cigarette. Well I laughed at him, and so did the men working around him. I mean I was down to my last two cigarettes. I took their pictures and sat there watching. As I was leaving I handed each of then a 100 Khat note (about a dime). They seemed really happy with that, I hope happier than taking my last two smokes.

The next place of call was a monastary with a really cool teak temple. Of course no shoes allowed on the grounds. Np shoes so much that in the 1880 a group of westerners walked in and refused to remove their shoes and the monks beat the hell out of them. One of those monks for a life sentence. I took off my shoes and  socks immediately upon entering. It was as peaceful stop on the tourist trail so far. I don't think I want to become a Buddhist nun, but it was very relaxing. -- PLUS -- I saw a sign TOILET --> -- I followed obediently. My luck with western porcelain did not hold. I only peed on my foot a little which generally isn't that bad when I am wearing boots. Barefoot is something different.

The last stop was the gold Buddha. Men (only) have been putting on gold foil for so long at the tour book 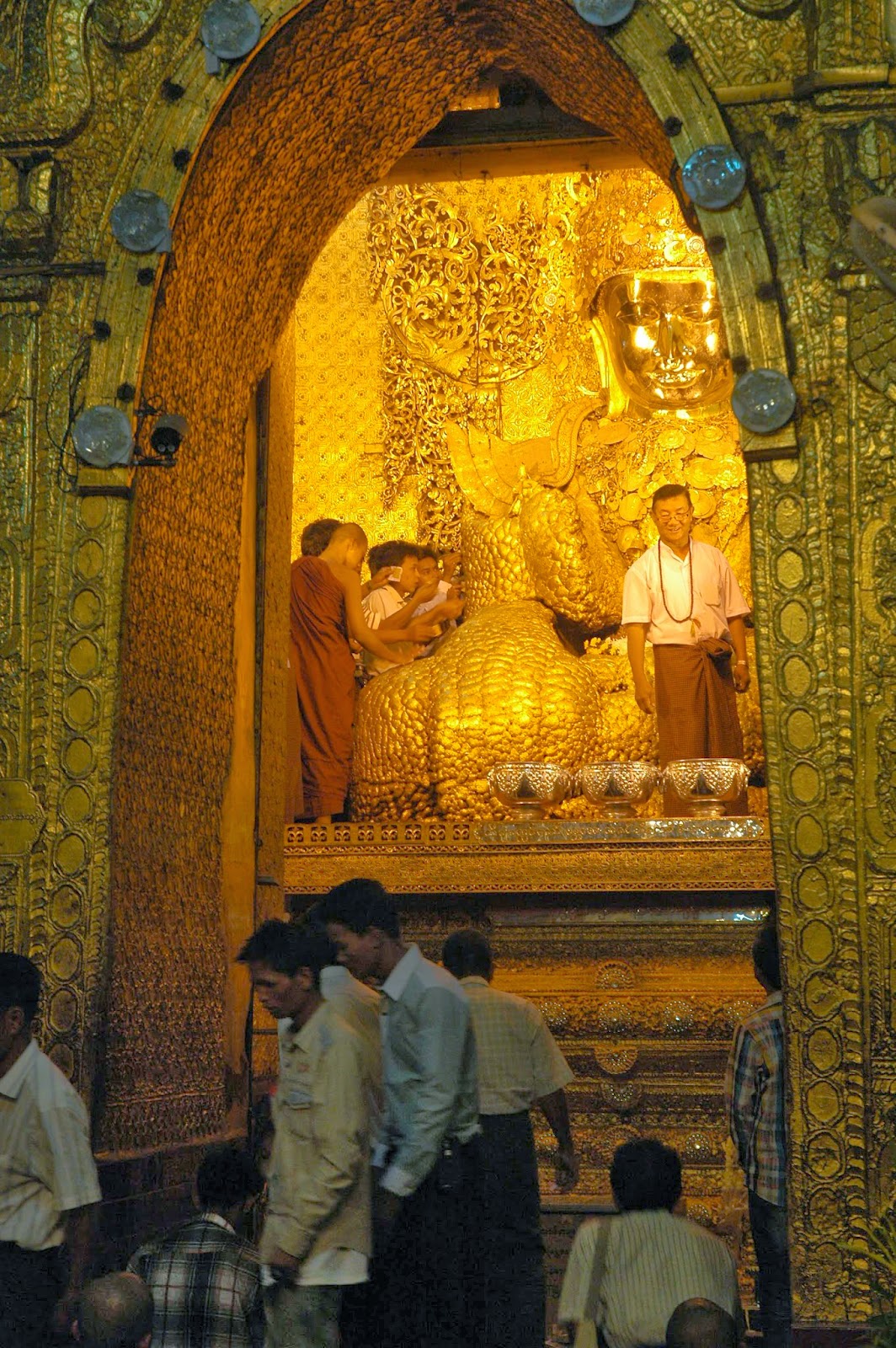 says that the gold is six inches think and this is a big fat Buddha. His face is clear gold and polished daily to a mirror sheen. In order to get to him, of course shoes are removed and there is a long, long enclosed walkway to the Buddha himself.  This would have been a spiritual walk except it was totally lined with neon lit shops selling religious paraphernalia, but mostly tourist aimed geegaws. The closest I have experienced before was the grand bazaar in Istanbul.

Buddha was an interesting site from the angle allowed that the women were allowed to be in.  Gotta remember those cooties. I would try to explain the sight but it is one of those things that even a 1000 words would not do it justice. I walked around to the back of the area where Buddha sat and found a blank wall with mostly women and a few men worshiping to a suspended television of the Buddha. When it comes to technology it seems Buddha is an early adopter.

zar in Istanbul except there was no pressure to buy anything.
Posted by Dorothy Macaw at 8:31 AM