This morning started the same as any morning in a 2 star hotel in a third world country. Find a darned plug for coffee and hairdryer. There are plugs galore and they all work, the problem lays in finding one that will fit snugly enough so that it makes connection. For some reason the plugs with the little round holes wear out and you have to fiddle with the plug to get the insert to fit just right. It works for a second and as soon as you release it it moves and you lose power. So you go through this dance of jiggling the plug, releasing it and when it keeps power to try and never move it again until whatever task you are trying to accomplish. The hot water is reasonably easy as it is static once in place. The hairdryer is nearly impossible. It was so impossible that I almost didn't wash my hair today. Eventually I reigned successful.

I rented a bike from the hotel because the boat driver said he would meet me on a bike. He did show up on a bike and had a trishaw along. One of the forms of transport I haven't ridden in yet. A trishaw is a bike with a sidecar sort of affair attached. I it has two seats of wood and generally covered in dirt. One faces forward and one to the rear. Maybe I'll get a chance later.

We got to the boat and he passed me off to a young man with English skills nearly as good as my Burmese. Not quite a bait and switch but if I had known that he was just a middleman I would have taken my business to a different vendor. The actual boatman. 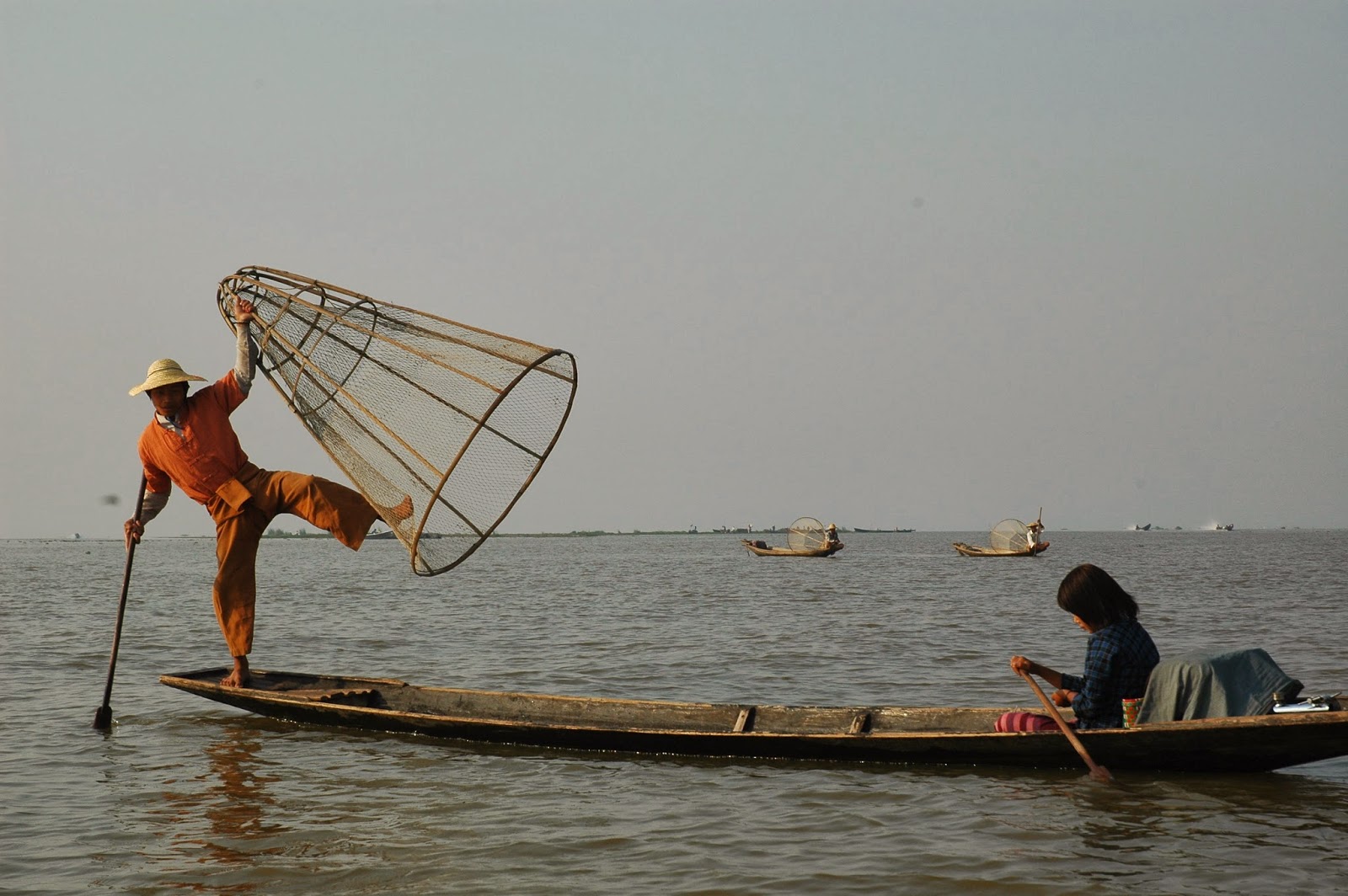 The boat is the typical boat you might think of going down a river in Thailand. Long and thin as a snake with a giant engine in the back and a long shaft connected tot he engine with the propeller on the end. The boatman cranks a wheel like winding up a spring and the engine coughs to life in a cloud of smoke and a heavy thrum-thrum that I am certain that it is going to die in the next second.
I never did, it just sounded that way. He revs the engine puts the shaft into the water and with a rooster tail of green water we were away.

The first stop was a town that was hosting the five day movable market. Every day a different village. Mr. Boatman pulled up a set of wooden steps and pointed shoreward. I climbed up onto dry bridge and walked into town. I started following where the string f people carrying full shopping baskets were coming from. Probably two thirds of the way there I thought. I've seen local markets in many places and they don't change. Tarps on poles, goods on tarps on the ground, fruits vegetables, some meat, some fish. This one might be in the woods, butt only thing different is the setting. I did a U-turn. A hundred feet into my return a dozen of so yellow hatted tourists trailed along behing a man dressed better than the locals. Obviously their guide. How was the market ? I didn't go. The day is early, you have plenty of time to see the rest of the lake, come with us.” --------- fine ! 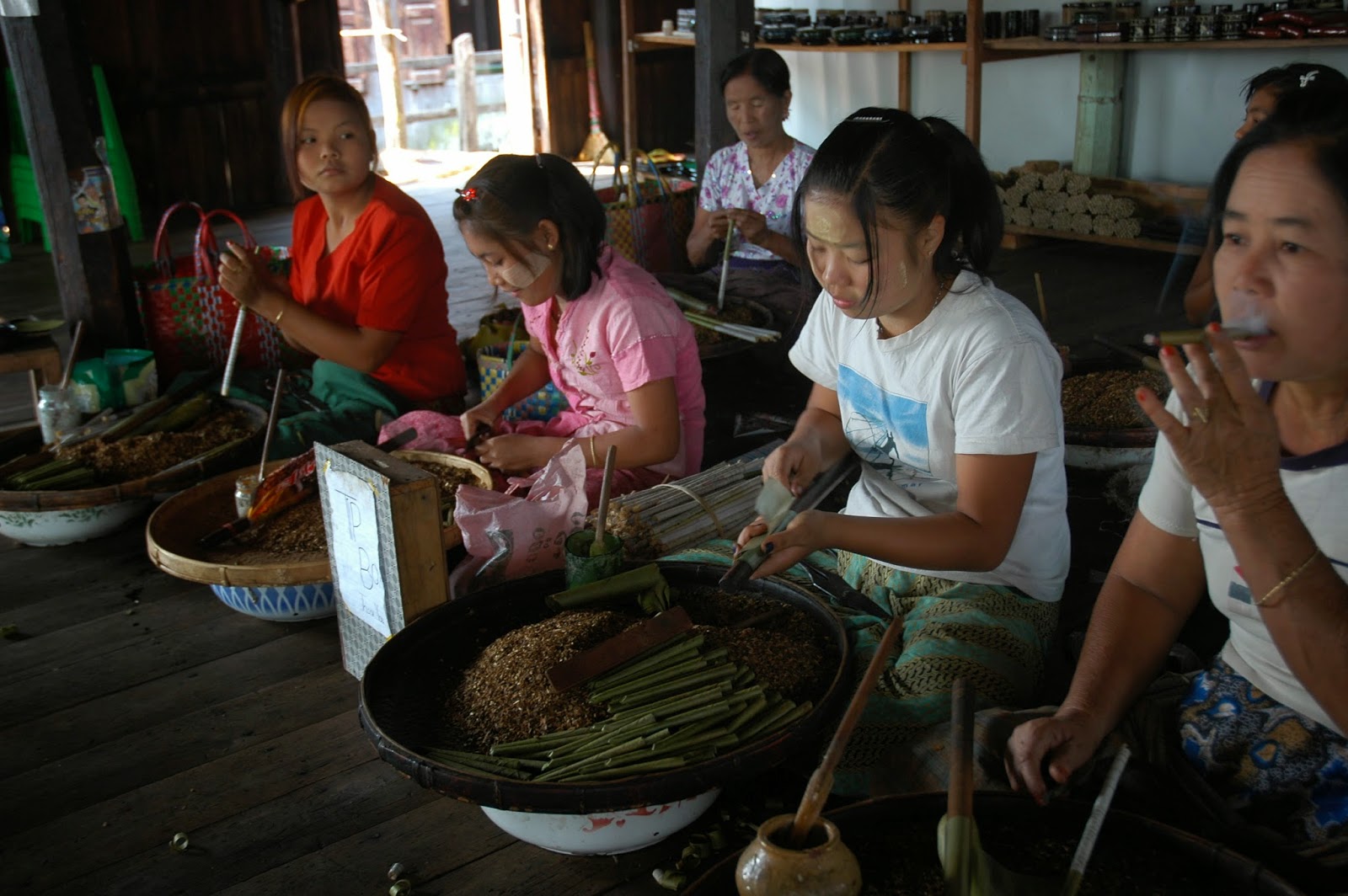 We walked along talking. I felt a little bad taking their guide's time when they were the paying customers, but he seemed to want t talk. So WTF ? When we got to the market it was exactly what I had envisioned. I could have stayed on the boat and not missed a thing – as far as the market was concerned. The guide told his charges to be back as a certain time and motioned me to the locals only teashop. I offered to buy him a tea and he insisted on hosting me. He ordered some local tea and (there must be a bad joke in here someplace) it smelled awful but tasted fine. Of course they were using the water from the river and it smelled it. The tea and sugar and milk tasted really nice, but fear kept me from more than a few sips. I know it was boiled, but how long ?

I glanced over at some of his group one woman stood out. Dressed in red from head to toe with a hankie to her nose and mouth. It was a little dusty, but nothing smelled. I asked Franco where his group was from, Italy. No, they didn't take and buses it was airplane all the way. He had lived in Italy for a while perfecting his Italian and next language to master was English. I thought he was doing pretty good in our conversation, but he wanted better. I asked him abut the woman in red. Nothing was good enough for her. The food, the lodging, the sights. One of those people who should stay home and read about it. He suggested a guesthouse in Yangon and neither of us had a pen to write the number down. I walked over to a lady selling tourist things and asked if I could borrow a pen. She took one out of her purse and handed it to me. When the information was affixed to paper I returned the pen to her and she said if I needed it, it was her present to me. Now that is hospitality.

Back at the boat, the next stop was the cigar makers, then the jewelers and the weavers. The cigar makers were the only thing that – you seen one, you seen em' all –. They rolled flake tobacco into tobacco leaves and crimped the top down inside the tube, instead of rolled tobacco leaves.

We stopped for lunch and a pagoda was offered. I declined. I found out later I probably shouldn't have. Instead of LED Buddha they had another gold leaf magnet Buddha. I had seen the one in Mandalay but a different one would have been gravy. 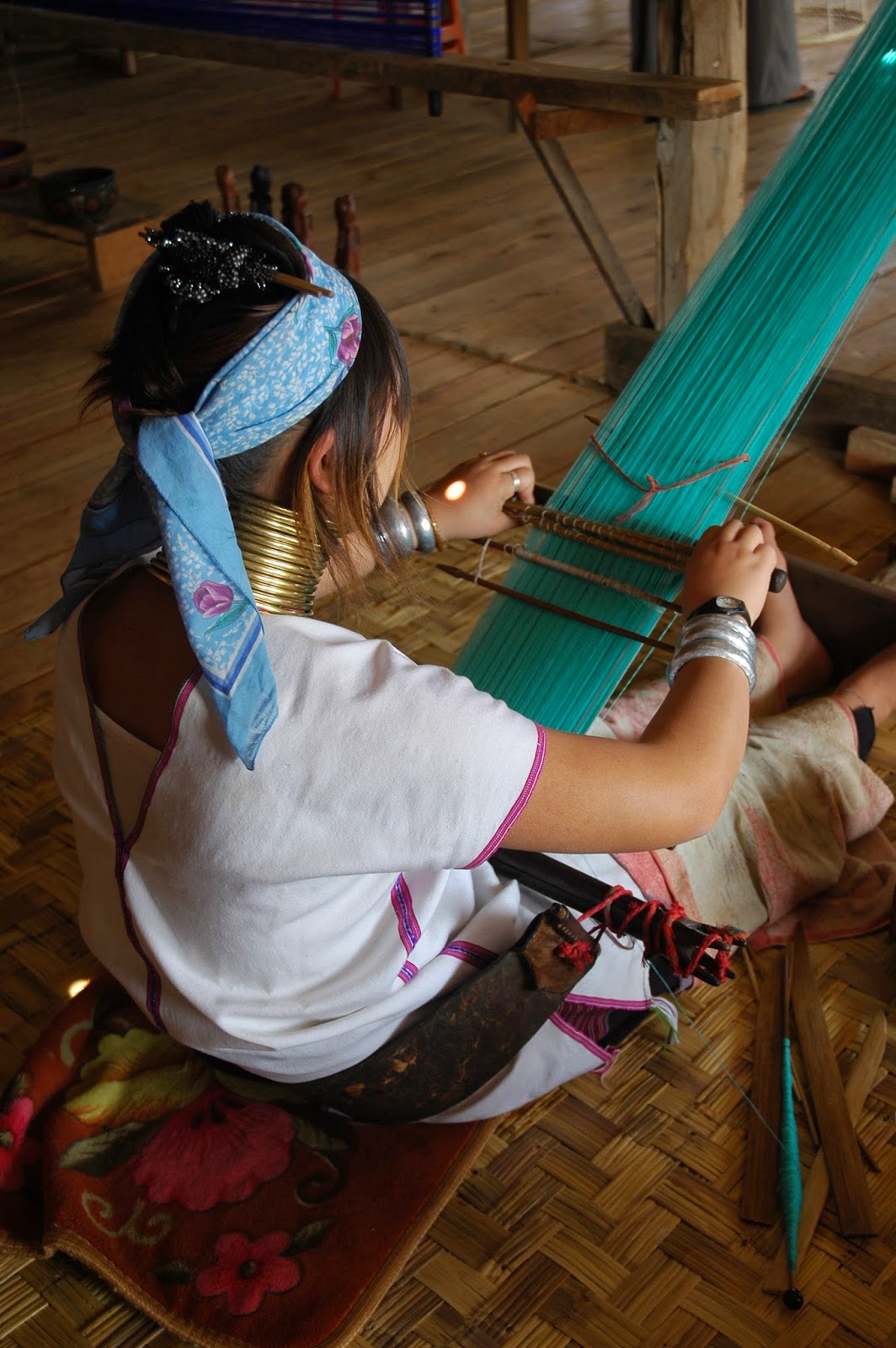 The next to the last stop on the circuit was a weaving shop. I thought we had already seem a weaving shop; This wasn't your normal weaving shop. It was your Ripley's Believe It Or Not ! Weaving shop. The women weaving in the shop were from a tribe in eastern Myanmar. The reason they were here is because there is some fighting going on there and it is closed to foreigners. They came to Lake Inle because that is where the tourists are. They start out at 4 kilograms and move up to 6 kilograms. If you live long enough you could be wearing 8 kilograms. For those of you who are not kilogram savvy it is about 8 pounds, 13 pounds and seventeen pounds. Just pick up a 5 pound bag of sugar and imagine that around your neck. The women just kept weaving as I took a few pictures. Feeling a bit exploitative, but nt enough not to take the pictures. I left some money behind to soothe my guilt.

The final stop was the monastery where the monks have trained some cats to jump through hoops and over things. The cats weren't jumping and the monks were off monking. It was a pretty cool building regardless of jumping cats or not. Numerous cats loafing around, accepting ears and belly rubs. One monk was in a regal chair on a dais and people would kneel before him and offer him cash. He would take it with just the tips of his fingers and place it in a large bowl next to him and talk to the person. I don't know if he was offering advice, absolving them of sins or telling their fortunes. It was fun just to watch him talk to them.

Back at town. I paid up the driver and pedaled back to the hotel and fell under the fan and tried to cool my poor burnt shoulders and arms. Well, duh !

Tomorrow at at a few before seven the taxi will be here to go to the airport and the beach for a day or so. I wanted to go to Taungoo and see the working elephant camps, but since they are in the jungle tourists require a permit and a guide to enter the area. Neither of which I have. So a day or so of umbrella drinks sounds kind of nice
Posted by Dorothy Macaw at 7:17 AM