These sandals are made for walking

As I was saying …

I kind of balked at the idea of climbing the temple to see the sunset. A little prodding of Bobo got me to submit to his idea of what would be fun for me. The climb up was really nice. A perspective overlooking the entire plain. I knew there were a lot of temples in the area, but until I got high did I realize just how many. We only stopped at maybe less than 10 yesterday and I would image that was just a 10th of the total. Granted most of them are unremarkable, but still there are a ton, no several tons of them.

I took a lot of pictures as the light and shadow changed. I don't know if I got any shots worth printing we 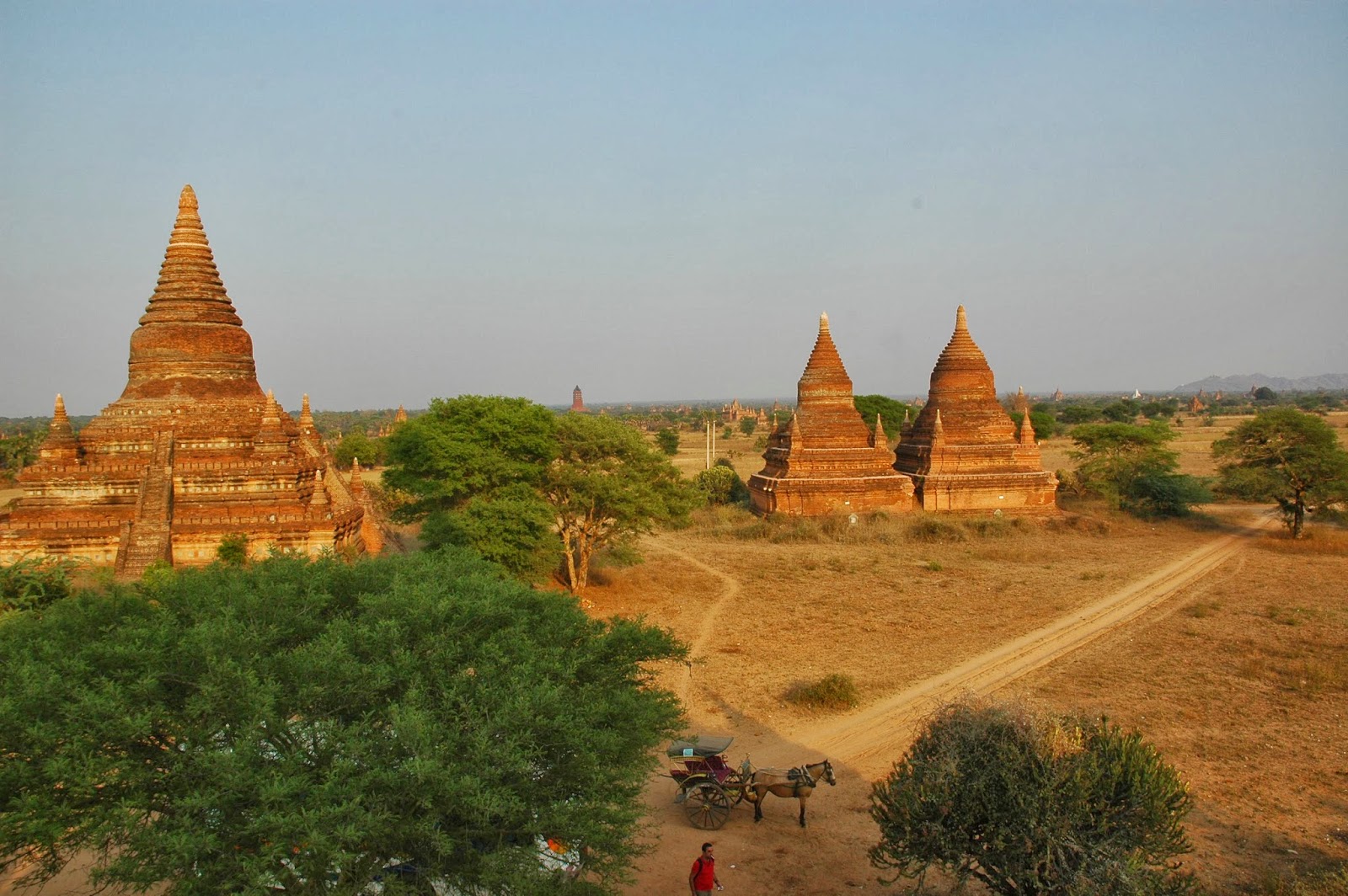 shall have to see once me and Photoshop are reunited. Sunset ? Well it did. Not a lot of color as sometimes happens. The sun played peek-a-boo behind some clouds and finally fizzled out into the haze. Nice perspective, better than midday light, so so sunset. Glad I went.

But like mount Everest. The top is only half way. I must have looked like a spider coming down all stretched out and hanging on. Obviously I didn't need to use my trip protection. 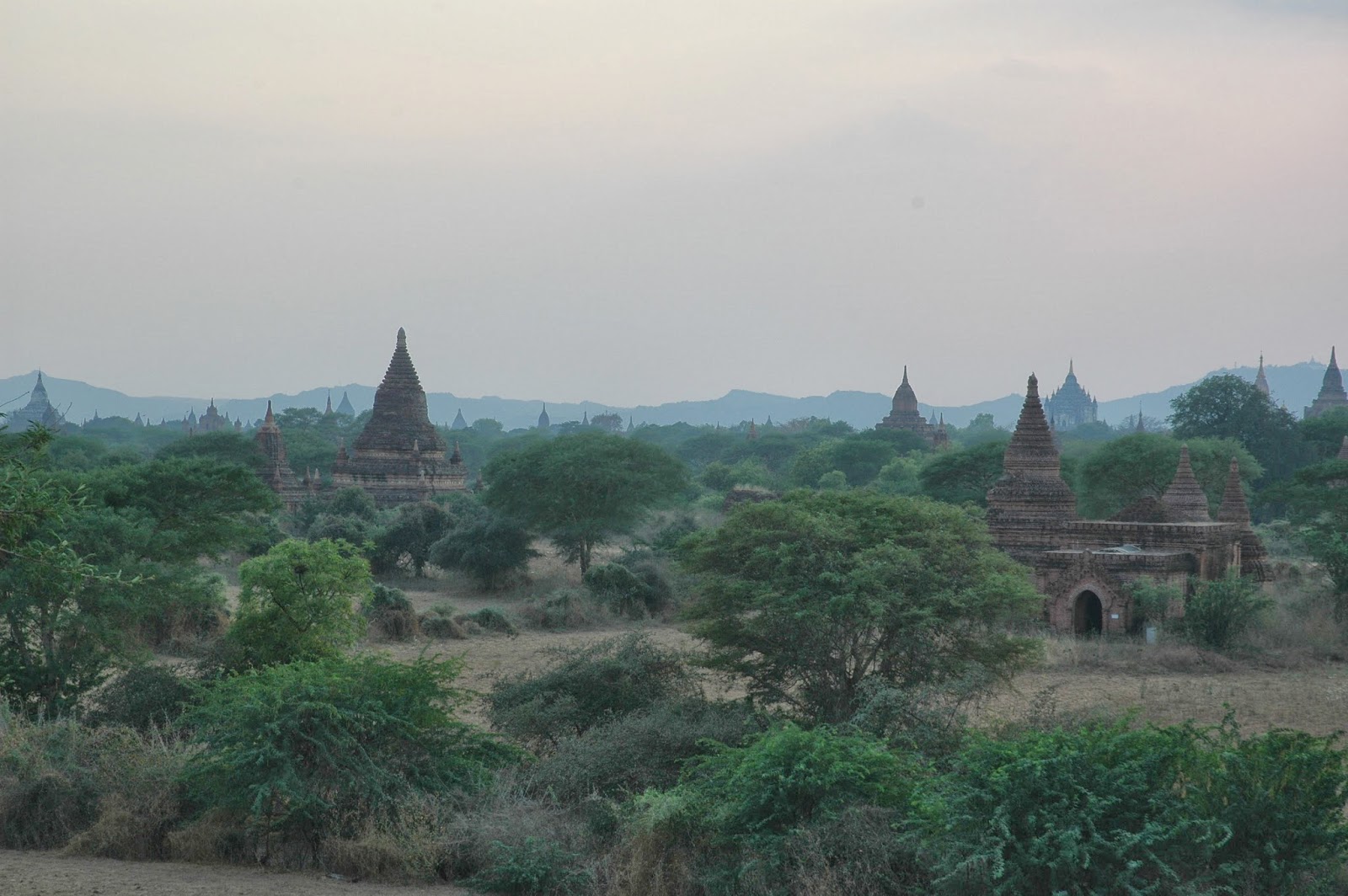 The horse was happier on the way back. I am not sure if it knew ti was – go home time – or it was a little cooler. However it was it was nice to see the horse not just plodding along.

Back at the hotel I told Bobo that I would be taking a horse cart day off tomorrow (today) and would be going to the outlying areas via taxi, but I might like to get some early morning photos the following day (tomorrow). He gave me his business card and wrote his phone number on it. I told him I'd give him a call and let him know.

I made a quick pitstop and then headed out to seek dinner. I liked the place I ate at the previous night and the price with a beer was about the same as a Mocha Frappiccino at Starbucks – and – they had WiFi. Maybe their Wifi would let me get onto my blog. (it appears it did). Dinner was good but missing some crucial elements from the previous evening. The prior meal was sliced raw carrots and such, a kind of chopped up spinach mixture, broccoli, a really great fresh curry and some boney chicken that had been portioned with a cleaver into bite sized pieces. There were no carrot sticks and no curry last night. I didn't tip. To be honest I am the only tourist who does so I doubt they even knew I was slightly miffed.

The morning came and sitting on my veranda sipping coffee and watching it lighten. Had some breakfast and then went to wait for the taxi I had called for last night. It was the same taxi driver as I had from the airport. On the drive into town he gave me his card and told to give him a call and he would give me a full day for $35. Seemed pretty fair to me. In the phone conversation I had his say “$35 for full day” back to me. At the appointed time a different taxi driver arrived and told me the other one was busy. Ok, fine. No huge deal. I told him where I wanted to go and his eyes got big and said $30 more. I told him stick to the original price and I'll pay for the gas, because I know we are leaving the town area. He got on the phone post haste and called the no show driver and handed me the phone. “Nooo, madam. $35 half day in Bagan only”. I handed the phone back, said thank you and walked away expecting to get called back. The car and driver drove away. It isn't the cost, but I am not going to be taken with 'bait and switch'. I might be missing out on the day trip of a lifetime, so be it.

So as the package tours say in their itinerary I have a “Free day”. Walked to the market and did some actual shopping. I walked down the tourist gauntlet of shirt and skirt seller and told on in particular I would return after some more looking around. I did return after taking s9me pictures and the stand was there, but she wasn't. So I walked down to the stand 2 booths away and after many different tries did fine 2 tops that would fit my fluffy body. I could have negotiated harder but she really do work to find a type and size for me. As I was leaving I passed the first shop and she was back. She gave me Holy Hell for not waiting for her. I don't think I deserved that. Maybe, but I think not.

Back at the hotel I asked them to call Bobo. Of course the phone was disconnected or not in service. O.k. Now what ? On the back of his business card it had his cart number and the area where he was generally based. Fair enough. I requested directions from the front desk and she pointed in the general direction with a left at the traffic circle. Learning from a previous mistake I asked if I was going in the right direction about every 10 minutes. Kind of like saving your work when working on a long document, except I don't have a built in autosave. One of the stops she suggested I take that dirt cow path over there. It would be like cutting off the “V” I would be making at the traffic circle. True to her word she saved me a substantial amount of walking.

I bought a bottle of water and kept on keeping on to the location on the card. I knew he would be out hustling customers but I was optimistic. His number is 20 and of course no 20 in sight. There was a 29 though. He and I exchanged pleasantries and of course he was more than willing to take me to see the temples. He did know Bobo. I told him. “If you see Bobo, tell him the American lady from the Thante hotel wants to talk to him. If he finds me as I am walking back I'll give him 2000 Khat to give to you.”. 3000 was the rejoinder. Then he said lest splint the difference at 2500. I did try for 2300 but he kind of had me over a barrel ($ .20).Then he said “I know where Bobo live. You wait here ten minute.” Sounded good to me. I was in shade, I had water, I would have waited 30. I didn't have anything better to do anyway.

Ten minutes later he came back with Bobo in the back of the horse cart. I had to smile. I handed two 1000 notes and started peeling off 100's. I paused at 300 and looked a question at him. He just continued to hold his hand out until the other 200 landed. Smiles all around.

Bobo happened to be at home instead of searching for tourists. He had a 2 a.m. gig of moving luggage for someplace to someplace else. Then found a Dutch couple who wanted sunrise service at the temples and that was all. So his morning was made by nine thirty. We made the deal for tomorrow. Six a.m. Call time (he set it, not me). Early morning photo shoot and New Bagan with something else in the late afternoon.

They offered me a ride back to the hotel, but my pride kept me on my sandals. I made a wrong cow path choice on the way back and ended up half a block from my hotel. Life is good.

The remainder of the day is watching tourists attempt for melinoma at the poolside. Take a walk to the travel agent to get a ride out of town day after tomorrow and find some grub. Sounds like a “Free day” to me.

Posted by Dorothy Macaw at 2:58 PM