At a pretty expensive hotel. The Savoy. The choices here in Yangon are either crappy and expensive or pretty nice and very expensive. I reviewed my bank roll and opted for the latter. This hotel is in the same family as the one at the beach, though you get less for more here. Eventually They only had a room for the night, tomorrow they are full. I thought about staying for another night in Yangon, but the only thing that is an absolute must see is the big temple on top of the hill that is a fifteen or twenty minute easy walk unless you count trying to cross the street then it drops to exciting. I decided rather than spend another day in Yangon and see what there is to see, perhaps if I return to Myanmar (and I just might) take in the other sights then.

This morning I woke at my usual four-thirty. Check out time was noon and the bus to the plane left at twelve 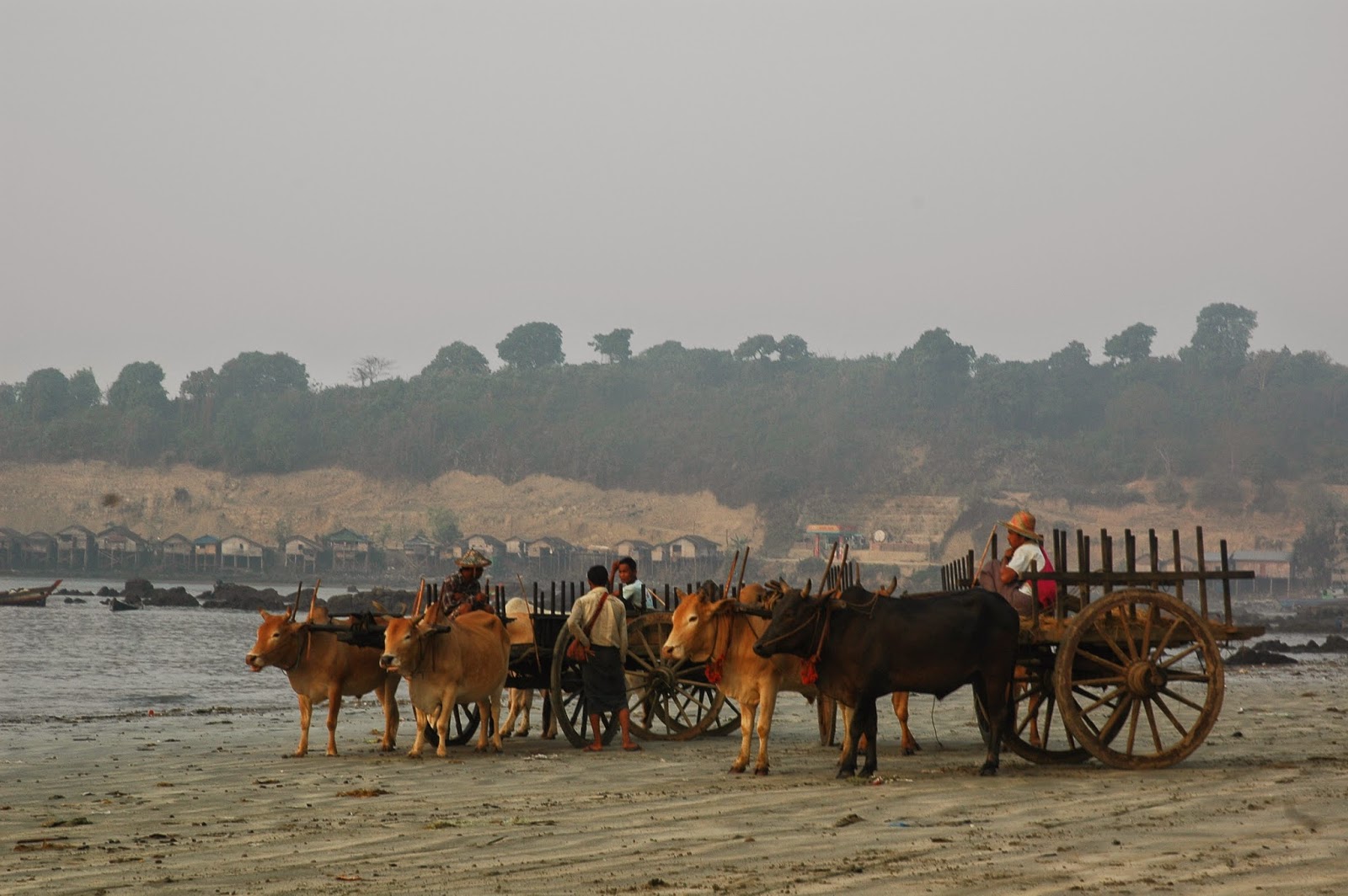 thirty, so I had some time to kill. I made a mug of coffee and sat in the dark on the porch and listened to the waves. With the caffeine charge I went and got my trusty spooked charger and pedaled the three miles To the fishing village at the end of the road. It was so nice having the entire road to myself. Only on occasion having to pull to the shoulder to let a three of four wheeled vehicle pass. The remainder of the time down the middle of the road cruising along. Heck I even got into second a time or two.

The residents were a tough crowd today. When I was the only thing on the road people said hello. Once things got a bustling though I couldn't get a smile of a hello from anybody. I am really perplexed what the change was. The only person who seemed really excited to see me was that same darned village drunk. He wasn't nearly as obnoxious this time. Said hello, called me police, saluted and was on his way. The harbor had the same number of boats as usual, but the men and women who off load the boats were pretty idle. Maybe it was the Indian;s day to fish or something. The unloaders were waiting and even some ox carts but not much action. Possibly I was a tad early by half an hour from the previous time. Whatever I watched the sun rise and scooted back to the hotel in time for breakfast and a shower. Not in that order.

I hung out on the porch for a while, made some more coffee (not a smart idea in a squat toilet country with travel on your mind.) I didn't nap but I did set my alarm on my iPod to alert me when it was time to leave the room. – in some ways I've felt a little like living in a Las Vegas casino, I have not seen a single clock in any hotel room on this trip. The Raddisson in Bangkok at least had a clock built into the television. – The hotel bus left with a half dozen of us on time and in a few minutes were were doing that think I hate so much and volunteer to do so frequently – wait for a plane. Tge plane was late and the process for finding your plane is unique but it works. Each airline and sometimes each flight has it's own sticker that you stick to your boob. When it is your time to board they come through the waiting area and if you haven't responded to their vocal notification they look for stickers and tell you to get to your plane pronto. An odd process but one that worked for me so far. I generally looked for someone who I thought was from Myanmar with the same sticker. When they go up so did I.

By the time we had landed in Yangon I had decided that one night in would be enough and since I didn't have enough time to go anyplace else in Myanmar I might as well hit the road Jack and return to Bangkok tomorrow. I kept running into the same German couple as on the plane. I tried to get some money changed but all the exchanges were on break..Everyone at the same time. So I thought I would see if the airline I flew to Mandaly on could sell me a ticket, since it was getting close to four and travel agencies here close at five. I found the airlines check in area and was directed to over there with that common wave of the hand. Over there were several doors and one one in teeny letters was AirAsia. I knocked lightly and cracked the door. They must have been having a staff meeting because I was told to wait outside. About this time the German couple showed up. They had to pay their checked luggage fee. They paid and skee daddled. Te woman at the desk said they had two flights tomorrow. One at 8:30 and one at one. I told her the 1 p.m. Would be great, thinking if I got up early I could see some oof the town before having to leave. She came back and said you are on the 8:30 airplane it was thirty dollars cheaper. She seemed so proud of herself I didn't have the heart to correct her. 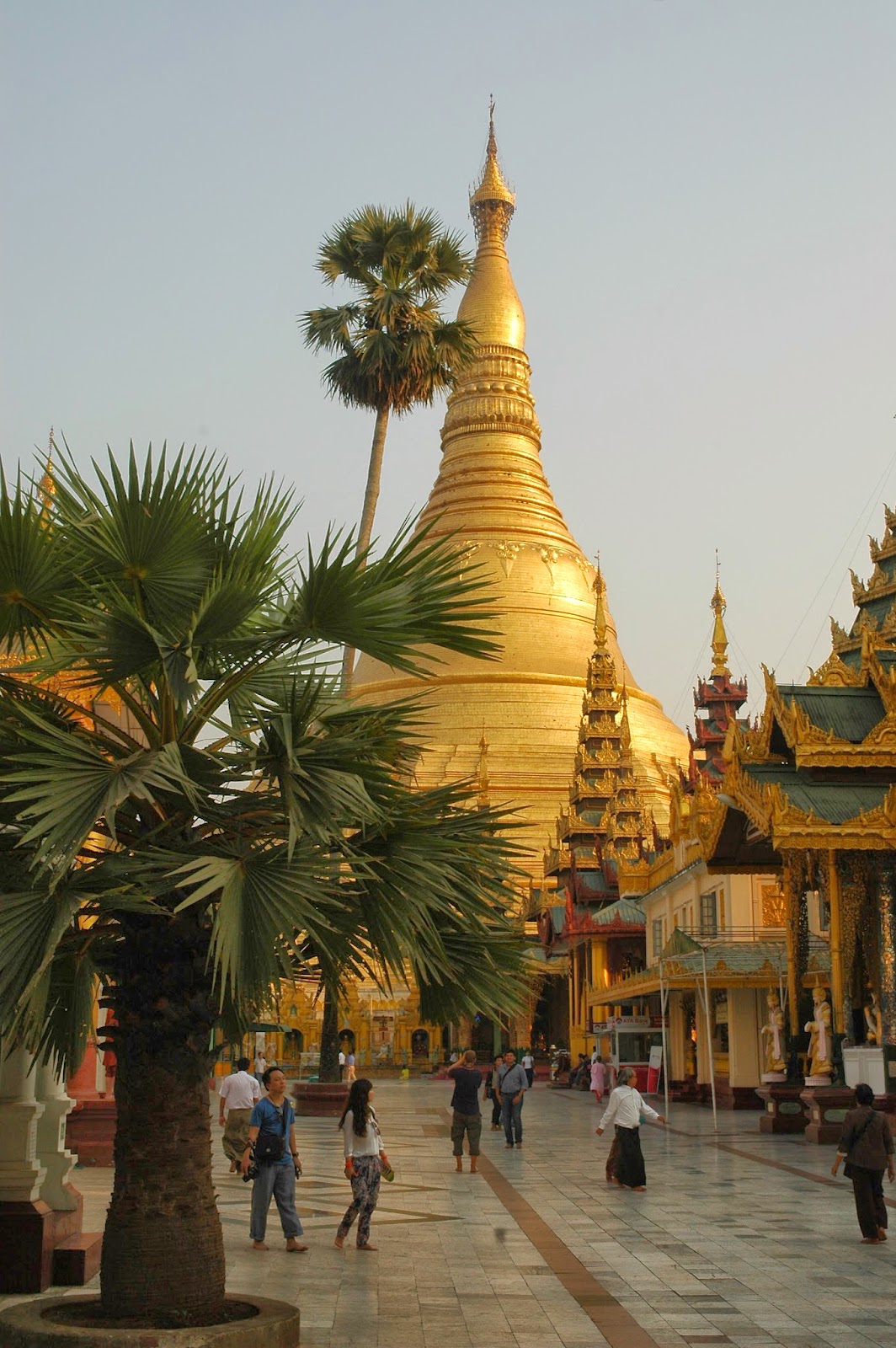 With ticket in hand I left and was found by a taxi driver in a New York second. As I waited for him to juggle things around who should walk by but the German couple. I told them I would meet them someplace in Bangkok tomorrow.

The hotel was not expecting another check in.so I caught them a little off guard. The doorman escorted me to the bar when I entered until I asked if this was reception. Reception did the old owl look. Who are you ? I told them I had a reservation and they looked like I had lost my mind. Finally I said the magic word “Patrick” the manager at the beach. Thgey did the mad scramble then, again reminding me it was just for one night. Ok, fine, let's get this check in thing done so I can get to sightseeing.

In the room I dropped my lggage and my hiking boots. Donned my sandals, camera and Indiana Jones and was off in search of the temple of Yangon fame. It really wasn't much of a search as it is the biggest thing in the city. Dodged traffic and was walking up a hill to the temple, but it didn't feel right. So this guy and his girlfriend were having a spat. She was sitting on the sidewalk nt looking at him or responding in anyway to his entreaties. This is the guy I'm going to ask directions from. He reassured me I was going in the right direction. I found the entrance, dropped off my sandals with the shoe guard, went through the metal detector and was waved on by from the magic wand lady and walked up the steps. – Jesus went crazy with the money changers a long time ago, If Jesus saw the walkways to his temples like these are he would be a whirling dervish. The entire length 0of the walkway was lined with vendors of all sorts of things. They are as aggressive as on the street, but still ….

I climbed the stairs, I thought I had read about an escalator but the only one I found had nail polish on it's 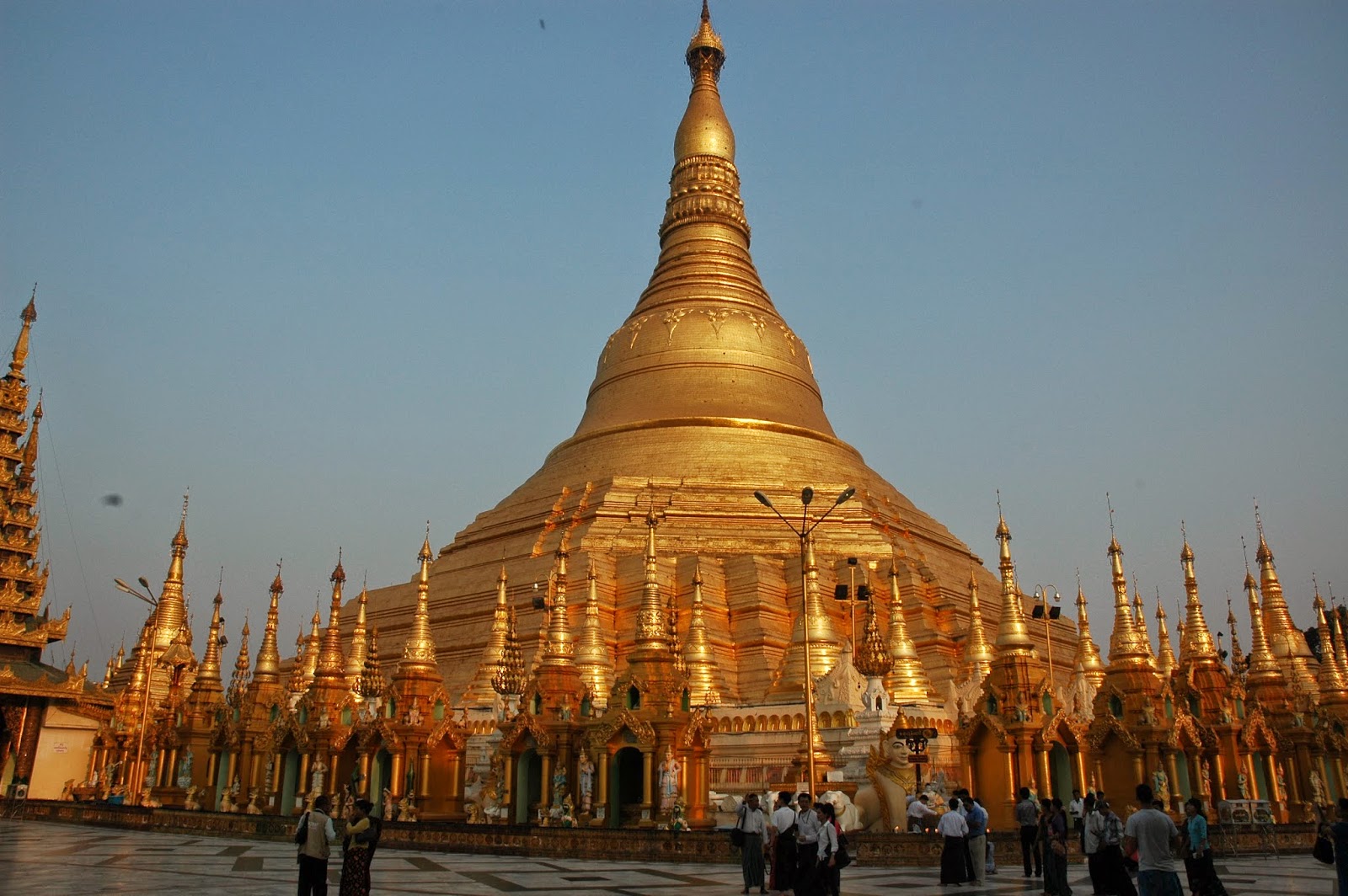 toes. What a sight. Everyone I asked about it on the trip told me it was worth the time and effort to see it. Boy were they right. If your God lives there he is a pretty powerful guy. Pictures to follow. I walked around the Stuppa the wrong direction the first time. Remember that right and left thing. Right side to the stuppa. On my second pass I run into a French couple I met some place. They both had a sticker on and I didn't think they were waiting for a plane. I asked about the sticker. He said that was to show that as a foreigner you had paid you entrance fee. – Uhhh... I didn't get one – I'm probably going to God jail. Maybe that is where the escalator was at the foreigner's entrance where the guy fighting with his lady should have directed me. Maybe he was distracted.

The walk back to the hotel was easier. Not due to anything on my part but because the major street I had to cross was totally grid locked. So sidling through the stopped cars was reasonably easy. The hotel has two options to eat that I found. The bar for bar food. Burgers and such and a U.S. Priced French restaurant. I thought about bar food at pool side because the bar was totally full and a din of noise. It was just too hot for hanging around the pool even at seven at night. Inside to modern A/C and French food. It was a good choice over all. Really good service and very tasty food. Had a really nice glass of French Chardonay., a goat cheese salad and duck breast in a pepper sauce. I was really happy with everything. I left a 20% tip and I could see in the server's eyes that this was WAY more than she generally got. Whoops! If I was home I certainly would have tipped 25% maybe a little more, the meal was that good. I thought I was doing well dropping it down. I guess I should have dropped it down even further, but I probably wouldn't.

I wish I had more time to explore the hotel. The room was very nice. But you can read my TripAdvisor.com review if you are all that interested.
Posted by Dorothy Macaw at 11:59 PM