The Tide Is (almost) High

Sorry no April Fool's day stunt here that would be too predictable. Besides spelling the name of this place probably is foolish enough as I seem to spell it different each time. 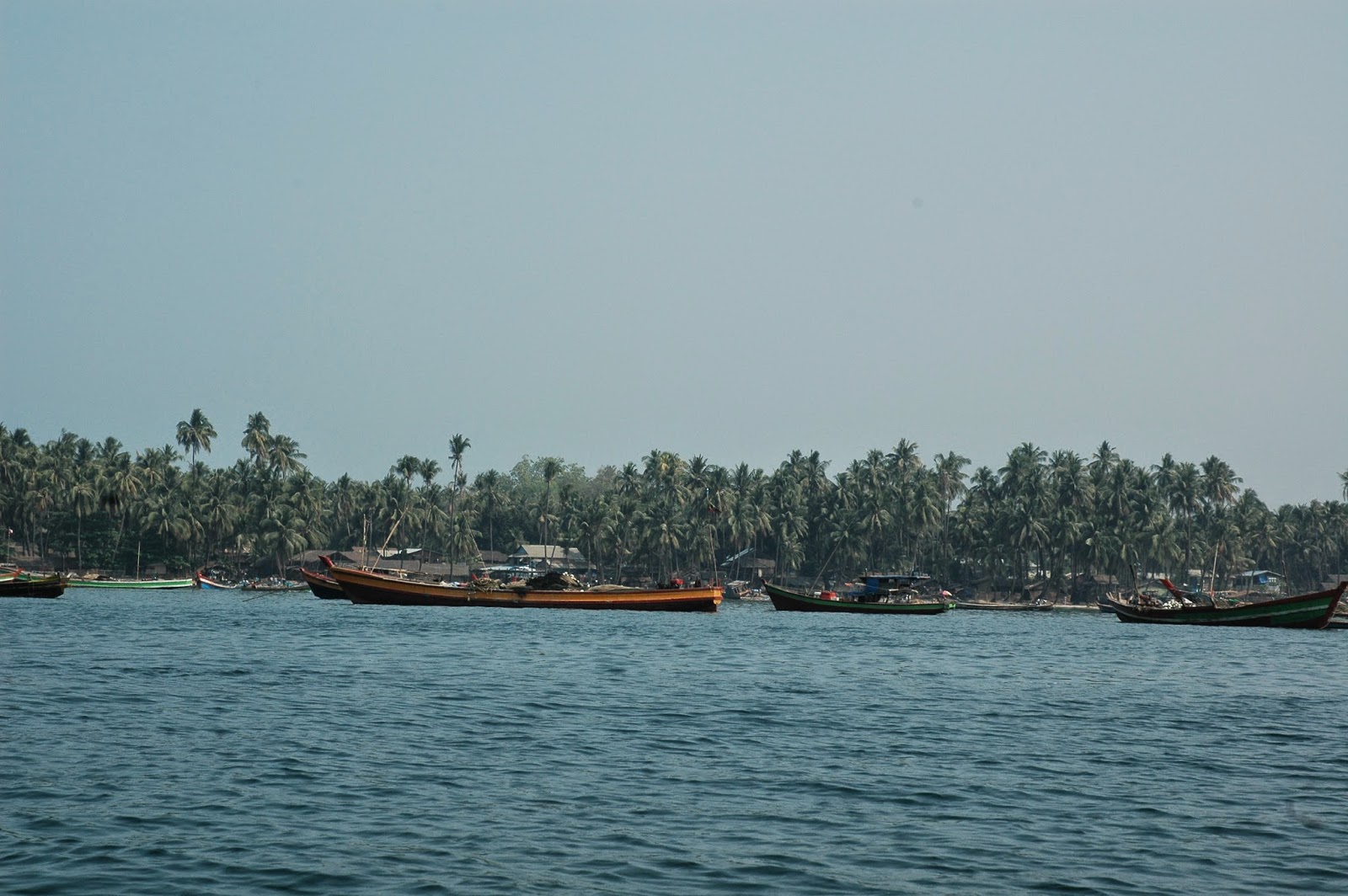 I got to sleep in today ! Nothing to do until 9 a.m. It was like a morning off. Got up make a cup of Starbuck's best instant and sat on the porch watching it become lighter and day break. The hot water thing and then to breakfast. Breakfast here is among the best this trip. Not the most varied, but the most tasty to my uneducated palate. – hmm .. an absolute sliver of a moon tonight, almost not even there. – Sorry had an ADD moment. – The manager was at breakfast as well. WE bid one another good morning and passed the how are you doing, that no one really cares, conversation. I finished my breakfast and since his English is rather good I asked if he could recommend a hotel in Yangon (Rangoon). He looked up from his iPad game and said he would let me know later. I hope he does or it's demerits on TripAdvisor.com. Not for him forgetting, but for blowing me off AND forgetting because he was into a game on the tablet.

Around nine a.m. The tourist wrangler arrived. He had mask, flippers, snorkel and water for a morning on the water. I had on my cargo pants and a t-shirt. Not exactly skin diving clothes, unless you want to appear to be wearing only skin afterward. I just don['t think the boat men were getting paid enough to be subjected to me coming in last place in a wet t-shirt contest. 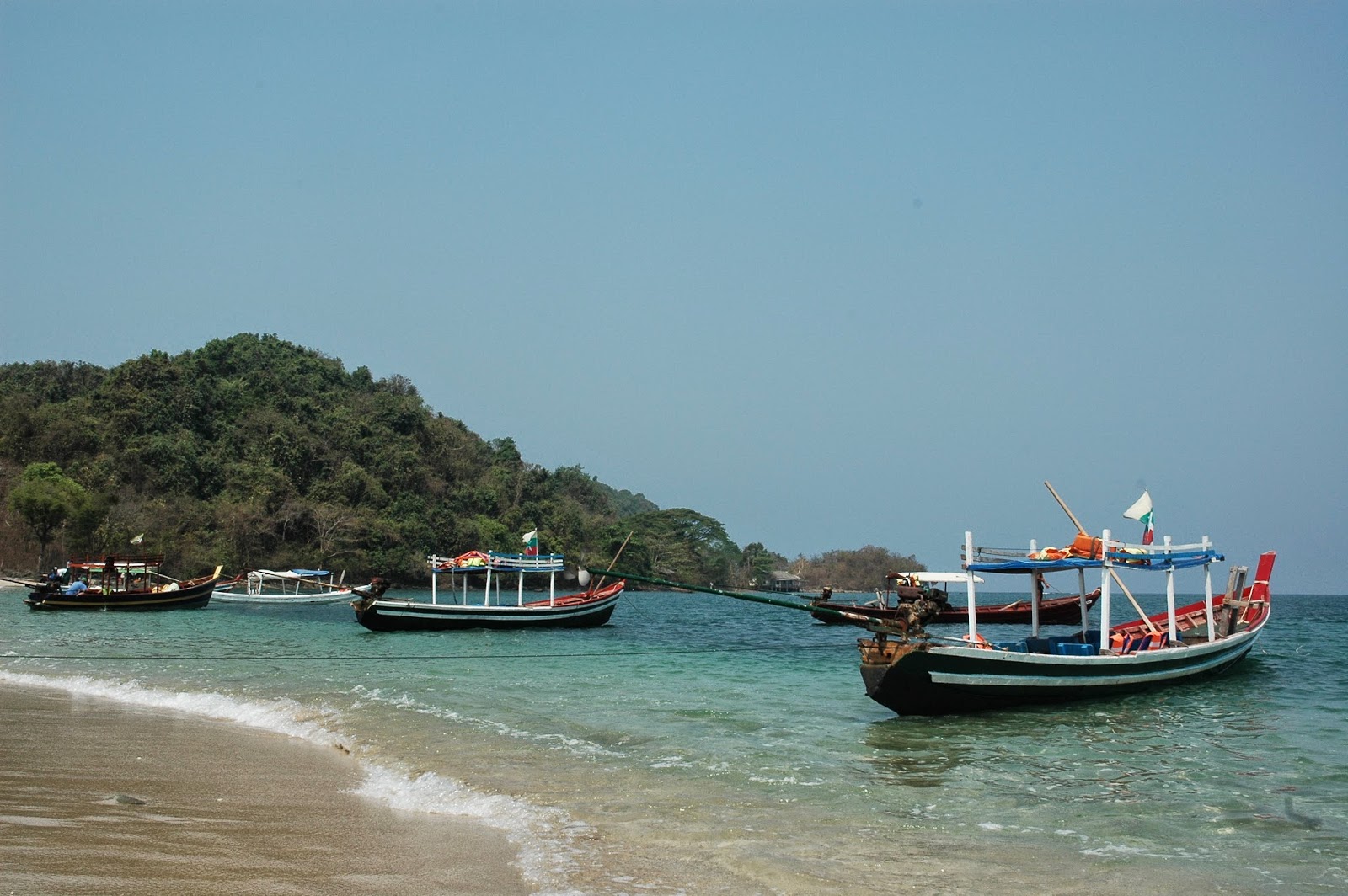 a young man to fetch and tote. On the S.S. Minnow the mate was the goof and the captain straight. Today's boat was the other way around. A very serious young man. The captain backed the boat through the light surf until the stern was grounded with the long tail shaft in the air. I put my butt on the gunnel spun around and I was now aboard. Things were stowed, the whine of the turbine, well actually the putt-putt started and we were off. The boat nosed through the small breakers and soon we were in the morning's swell. What a great day for crabbing kept running through my mind and not a pot in sight. There is an island perhaps a mile off shore. It is about the size of Cypress Island in Puget Sound. Out past the confines of the bay the slight swell of ocean larger than Puget Sound became evident. The boat would be lifted up and then slowly rock and drop on the back side. The breakers on the shore outside the bay were more aggressive but not like you see in the open ocean. I am not so sure about the geography but we are sitting on the Bay of Bengal. 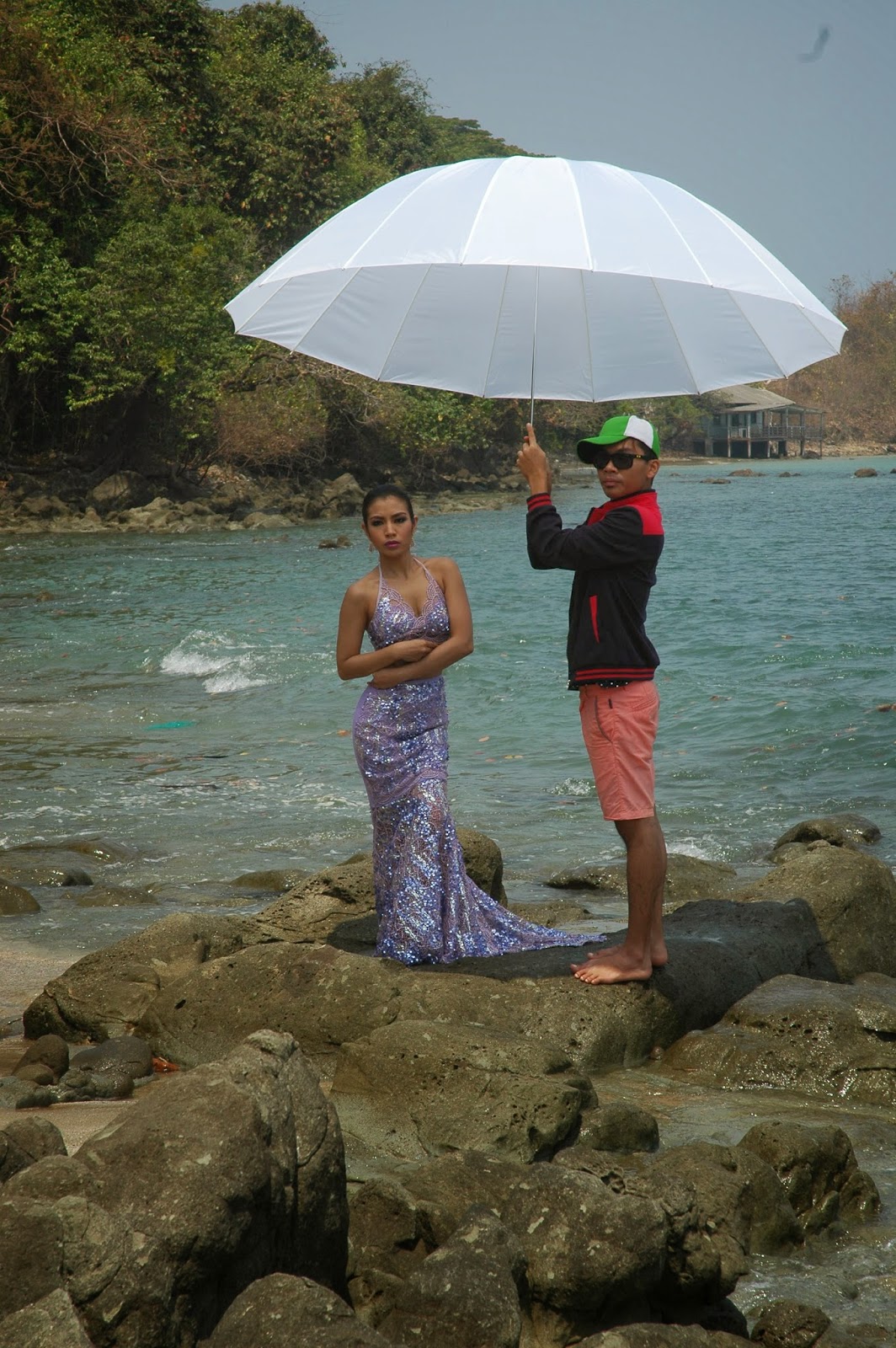 We cruised around the island and then crossed the other mouth of our bay and around a point of land into the bay I biked to yesterday morning. We puttered through the fishing fleet, such as it is, and then promised me a great photo opportunity. There is a huge Buddha on the opposite shore. It was too far away, it was back lit with the morning sun so none of it's features were clear for photography and frankly it really wasn't that great of a photo op. But not wanting to offend I clicked the shutter button a suitable number of times. Then back to the island for a pit stop for lunch or whatever. My choice was a Coke. The mate kept me company and we had the conversation that you have about family and all. He wants to be a lawyer when he grows up. Quite an ambition. At that stop there was also a photo shoot going on. I had seen them yesterday on my afternoon beach walk. Two pretty girls in long dresses. Support staff, make-up, reflector, gofer and people with clipboards. Everyone fussing around the “Talent:. One of the “talent” wasn't getting fussed over enough and showed a flare of anger. I looked at her and thought “I guess she's okay, but different strokes for different folks”


Back into the boat where we cruised a hundred yards off shore of our bay and hotel row as the mate recited the name of each hotel as we passed it. We stopped at a piece of calm water near the hotel. There was a small dance getting the bow pointed asea and I stepped into six inches of water and sand.

By now the heat of the day was very evident on land so I went and hid between A/C and my veranda fo0r the rest of the afternoon. In the late afternoon did something I never do on vacation. I left my camera in the room – on purpose. I went for a walk down the beach. Stopping at tide pools to look for critters ( did see a really cute little striped fish and some fish I had seen in aquariums in doctor's back home.), not much in the way of crustacaeons surprisingly. One man was trying to do some handheld drift netting om the tideline. And out poor, poor models were still at it only this time on mostly dry land.

A fancy froo-froo drink at the Green Umbrella as the sun set or should I say melted into the heat mist.
Posted by Dorothy Macaw at 8:18 PM