The best wasn't too bad. Except for a 3 am. break I slept until 5. Not too bad. I consider a reasonably solid seven hours while adjusting to a time zone half the way around the world. I did wake up with a horrid headache. Whether it was from dehydration or caffeine withdrawal two cups of Starbucks instant coffee made it Jake again.

I met Bruno (the taxi driver) at the crack of eight thirty and we sped off to go to the floating market for a morning of visiting with the locals. One of the things I didn't do was my research on what all was entailed. The darned market is 40 miles from the edge of town and town is big. An hour and a half is a long time in a taxi. Enough time to solve most of the world's, well maybe not all the First World's problems, but certainly the majority of the ones in the third world.

The world is run by the rich with no regard for the poor. Like “Duh!”. The king is old, and we aren't talking Elvis here. He has four sons who are trying to usurp the others place as heir apparent to the throne. But the army now is running the country, not like the police in the old days and exports are down to zero and the water rights are all being funneled to the big cities leaving the rural areas dry and arid. The best customers are the Indians. It used to be the Chinese but now it's the Indians. They bring the entire family and shop til they drop and then get pushed around in wheelchairs to shop some more. I might be exaggerating a little there.

We drove past mango farms, coconut farms, salt farms and every sort of manufacturing plant known to man. We passed a large store named “D Plus” which is still in business here in Thailand, so I assume it is not a bra store. We also passed “Big C”, which I hope is more a play on Kmart's “Big K”.

Eventually we made it to the floating market area and pulled off the main road into a car park that was surrounded by covered seating areas. I'm starting to get a feeling here, now. Smiles and nods and dusted off seats welcomed me along with a numbered plastic tag. This is not looking like a market and boats. This is looking more like a vacation condo sales pitch. I tell myself to relax and see where it goes.

Soon I am escorted to where the sales pitch comes. There is the monkey show to see. There is also the crocodiles show, not to mention the snake show. I'm kind of wondering where the bearded lady and the Siamese twins are. This is sounding very sideshow'ish to me. There are also the elephant ride.

Just give me the floating market, please. OK, that will be 3000 Baht. Lets see with 30 Baht to the dollar (roughly) that's ten dollars, fine lets do it. I handed him a US Benjamin and he gave me back 200 Baht. Gong ! Danger Will Robinson, Danger Will Robinson! Whoops ! I forgot a decimal point. He wants to take all of Benjamin home with him. A hundred dollars for two hours in a skinny boat on fetid water is not what I signed up for. Then I got the “Well lady” look if that is too much for your moth filled purse how about an hour for $70 ? I found Bruno and said let's go back to Bangkok. 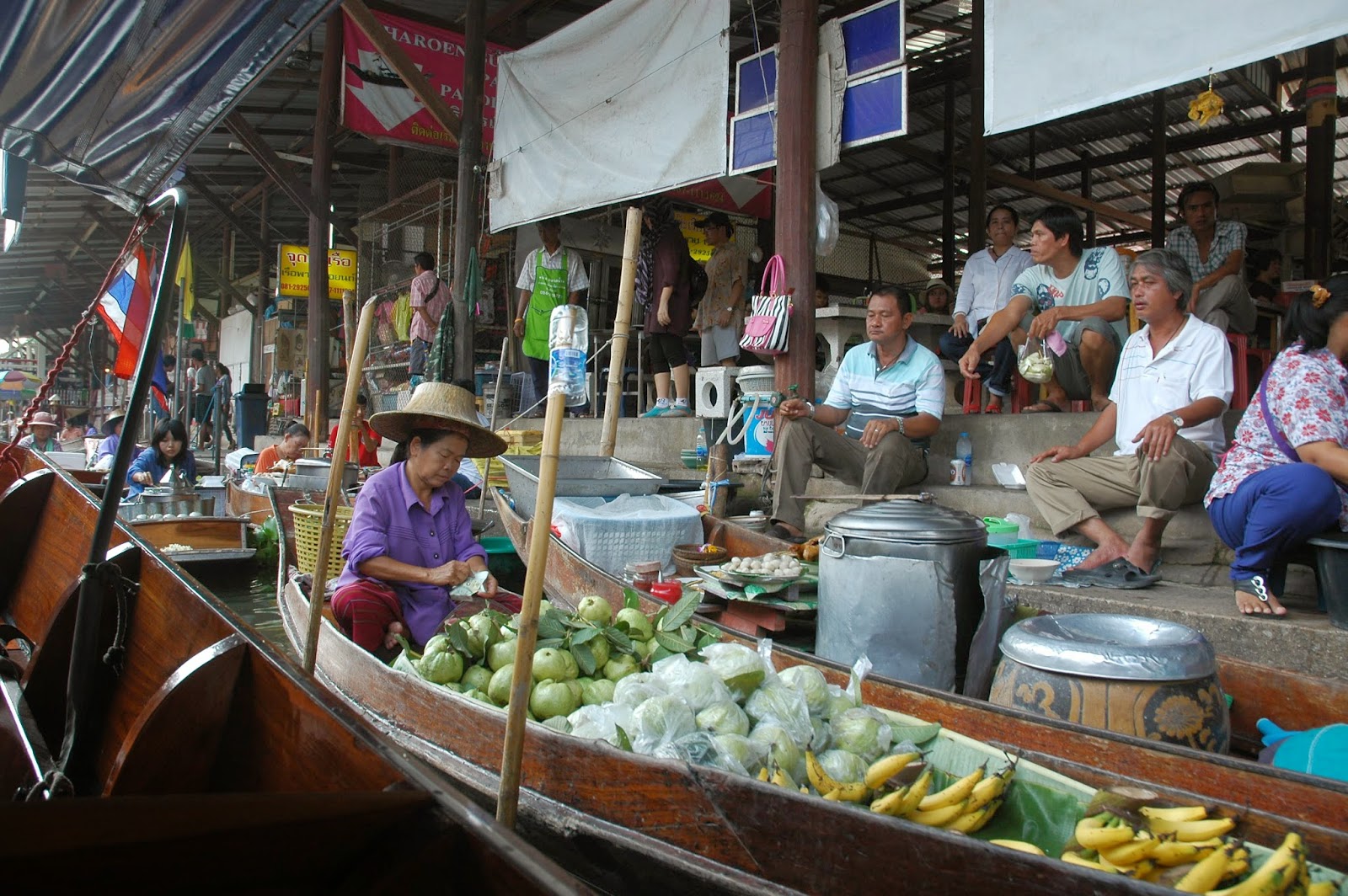 Wait, wait, how much you willing to pay? The only reason he couldn't see the steam coming out of my ears is because of the ambient heat and humidity. I just looked at him and said “no thank you” with a nod and a smile. I didn't get either in return. 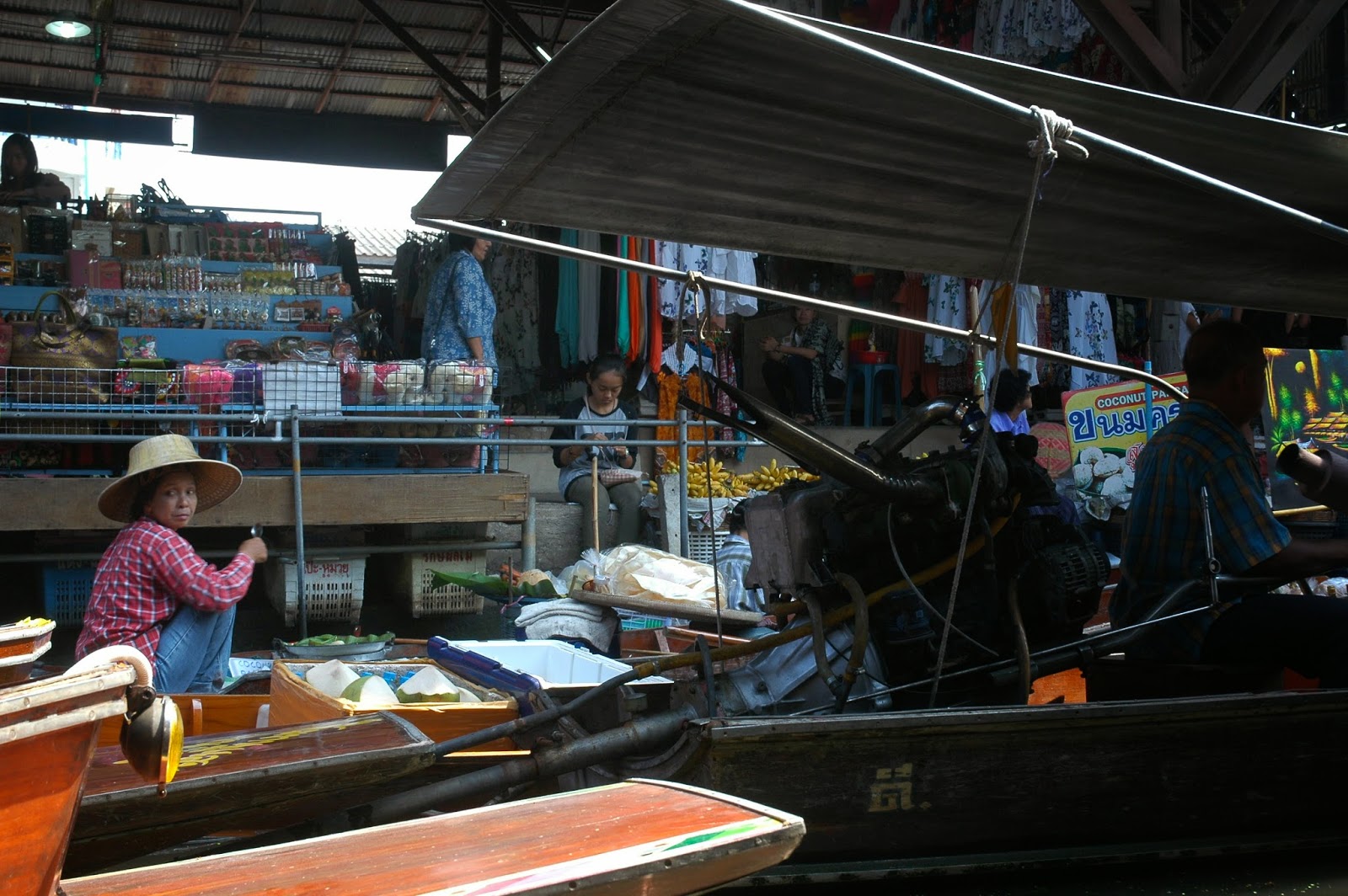 Yesterday I asked Bruno is it was a real place where real Thais shopped and he assured me that was so. On the drive out today I asked again and got the same answer. I didn't realize that Thailand was filled with overweight people with cameras around their necks and iPads in their hand filming their day's shopping. I know it is a Saturday, but I expected the Thais to be shopping for food and not t-shirts, hats that made into fans, carved elephants and brightly colored scarves.

It was a mess. Boats gunwale to gunwale down a narrow canal, four abreast. The boats on the outside continuously solicited trinkets to buy. The sales people weren't as aggressive as in Luxor, Egypt or Tijuana but they were persistent in a nice way. Of course with the boats filling all available space in the canal I was in for a traffic jam that makes Bangkok's traffic nightmare a bullet train in comparison.

It was Disneyland without Mickey. The only concession to it being an actual working market were the occasional and I mean occasional vendor selling fresh fruit or other dishes from their boat. Otherwise it was just a cheek to jowl tourist trap, and an expensive one at that.

I know that most of the taxi / Tuk-tuk drivers are snakes in big cities and especially here in Bangkok. I thought I had found, maybe not a Garter snake, but at least a small boa. Instead I had found a Rattlesnake with the rattles temporarily silenced. Not quite Cobra material, but still dangerous. I guess you can call me Eve for the rest of the day.


The ride back to the hotel was very, very quiet. 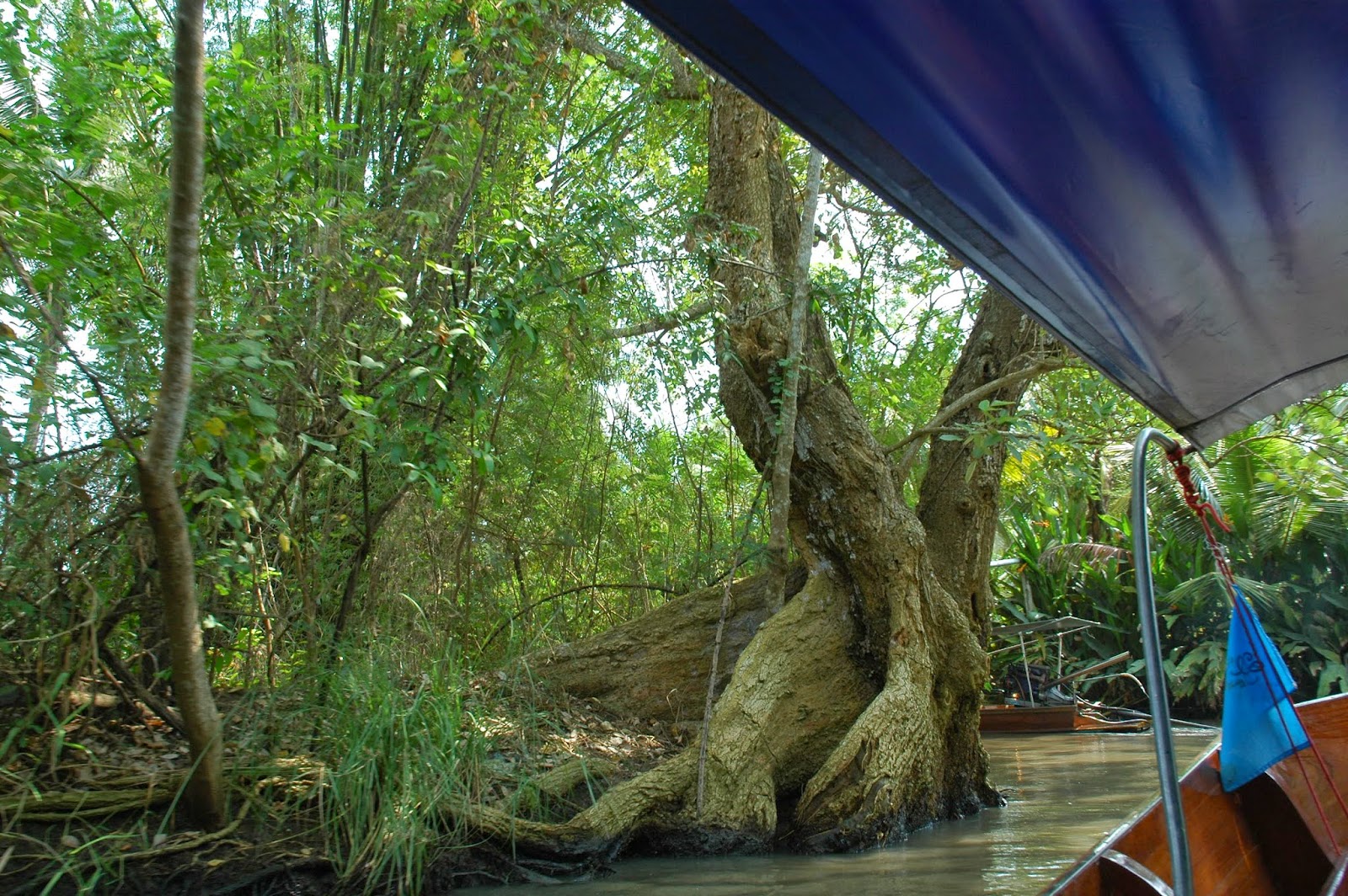 Posted by Dorothy Macaw at 1:52 AM