What to say for my first full day in Dhaka? How about this? If it was a man and I was on my first date with him, there wouldn't be a second date. A friend who I used to work with has a mutual acquaintance who works here for the UN or some other international government entity. The report he gave him was this town was the pits and the bottom of the pits at that. I have to agree with him. I assume once I head out of town that things will get better.

Last night after dinner I went for a stroll around the local area. A block or two in one direction towards the side streets away from the noise of the big street next to the hotel. You would have thought I had parked me flying saucer at the end of the street for the reception I got. Hard, hard stares that even a smile and a Salam failed to get to any of them. I might even have gotten a warmer welcome if I had been green and dressed in a metallic uniform. It was weird in an uncomfortable way. I didn't feel in any danger, just totally unwelcome.

I used to go t New York to visit a friend. I could only stay for three days, because I couldn't sleep for the noise. It would quiet down between 3 am and 5 am. If New York is the city that never sleeps, Dhaka takes uppers and has sold it's bed.

That guy who starts yelling before sun up in Muslim countries has followed me here as well. Five in the morning and he's yelling and singing away. Ay least this particular guy can carry a tune. He has a pretty good voice.

I was up a little before him and went outside to sip some coffee and watch the city wake up. There was a lot more hustle and bustle going on even than it was last night. Piles of coconuts and more enticed me to look. I felt a presence behind me and turned to find one of the hotel guards shadowing me. He than tells me it is not safe to be in that area during darkness. I asked him why. He said I might get robbed. Like, what? They are going to steal my coffee mug and pack of Marlboro's? I acquiesced and went with him back to the hotel to finish my coffee. Just as I was finishing it he looked at the sky and said “You can go now.” The mood was broken at that point. 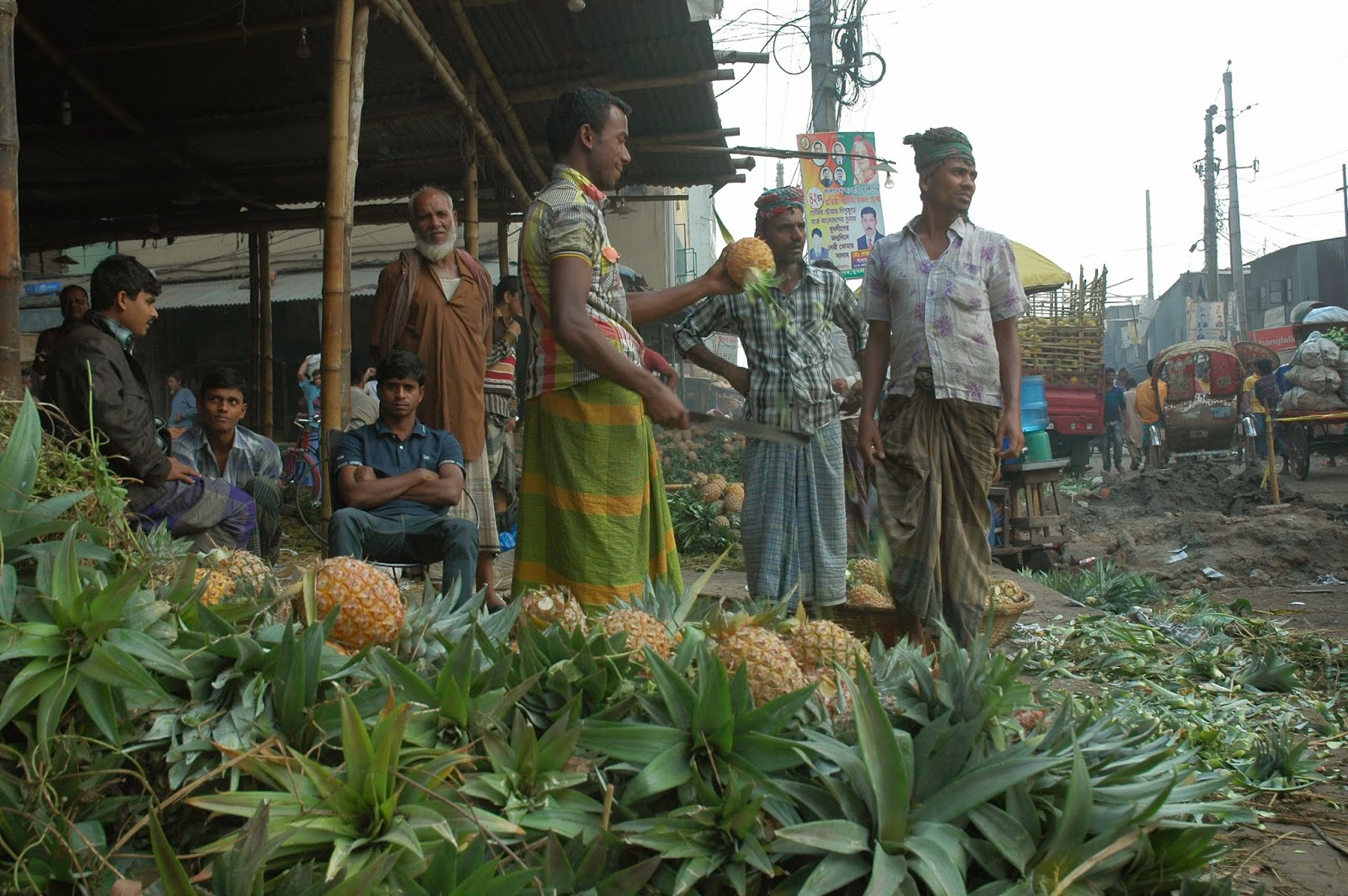 I did return to that area after breakfast and still got the stares, which I understand. Along with them were the other people who smiled back and tried to point out things I might want to see. Communication was very difficult though. Them with not English and me of course being an American not needing any thing else, because “Them there people should be speakin' 'Marican” I got pretty deep into the market and saw a few things that were new to me. The area the really stands out to me was the spice area. They had Turmeric bulbs that they were grinding into power like we are used to. The next stall had me sneezing and my eyes watering. They were grinding chili peppers. It was like getting a face full of OC spray. Don't Taze me bro' !

My plan for the day was totally different than the hotel's concerege plan for my day. His wasn’t bad, it was just very tourist centric. He suggested I team up with another guest and split the cost of the car. That seemed like a reasonable alternative. Not quite my solo style but why not. The man was on business in town and the plane only went to his home in India twice a week, so he had a day to kill. I learned about leather cutting dies that I ever dreamed existed. He was a nice guy with flawless English so the drive time passed easily.

The places on out itinerary turned out to be every tourist sight in the area. By that I mean, big buildings that meant absolutely nothing to me, or to my surprise to me co-tourist either. We drove 30 km out of town to see some place that I honestly can't remember what it was. Then we went to a poor recreation of the Taj Mahal that was one quarter size. It was in the middle of nowhere. Twenty minutes either way down a cow path and the was nothing around it except a fifteen foot wall to make sure you had to pay your dollar entrance fee before you found there was nothing to see. The only thing that stands out of our fifteen minute stop was that a couple Bangladeshi young wanted my picture with them. I'm really feeling like E.T. about that time.

Next was a Buddhist monastery with the tallest ascending Buddha statue in Bangladesh. We were greeted 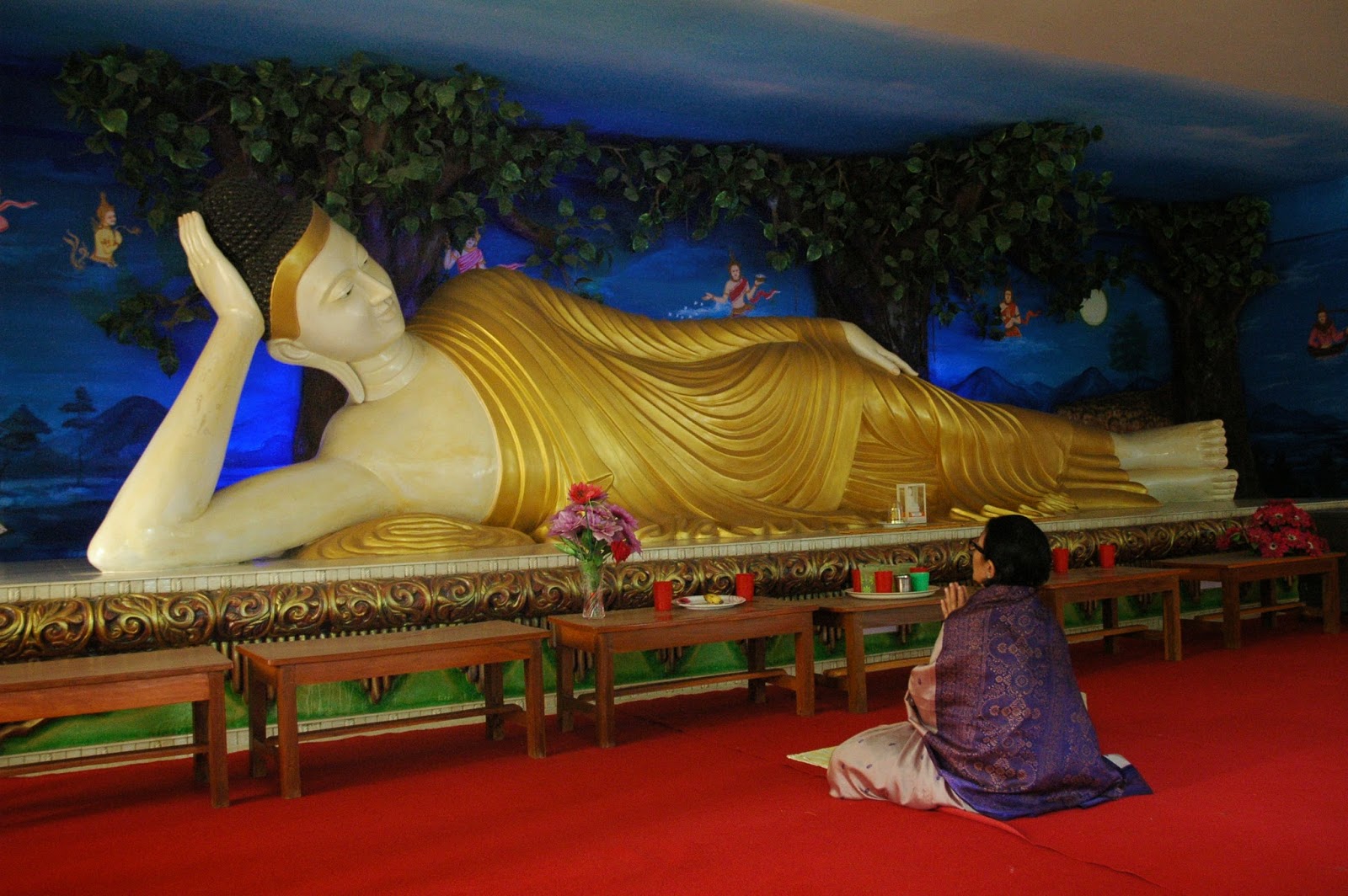 my a monk who walked us down a gallery of bronze cast Buddhas that were donated my patrons. He then ushered us into a room and put a table cloth on a table and invited us to sit before leaving. He never came back. Finally I asked another man why he thought we were waiting, he said he had no idea so we got up and left for more wandering around. The tall Buddha was cool, but I liked the Bode tree better with the reclining Buddha.

Then came the Hindu temple that was closed between 2 and 4. We were there at 2:30. As was our next stop the Parliament building because the Prime Minister was coming. The Catholic church was brand new and huge and along with the attached Mother Teresa orphanage was interesting for five minutes.

There was another stop or two along the way but it was just more of the same type of thing. The only people we interacted with besides our driver were the ticket sellers/takers. It was totally safe and sanitary. I am sure most visitors expect this type of tour. I was hoping to go down to the jammed waterfront where little canoes are overloaded with people and goods and then rowed across the river while dodging ships and sand barges. I wanted to get minimally lost in the mess of old Dhaka. I wanted to ride in a human pedaled rickshaw. I wanted a bit of an adventure – within limits of course. I hope to accomplish this tomorrow.

Driving around today and yesterday afternoon a few things stand out besides the bad traffic. Most of the three wheel bicycles are build to carry passengers, but there are also the ones that are like little flat bed trucks. On one of there flat beds, one man was sitting on one the flat bead on one side of the bike and his associate was sitting on the other side. One man pressing his pedal with his left foot and the other with his right. It looked efficient but I do hope they trade off so one leg doesn't look like Popeye before Spinach and the other like after.

Ambulances with their warbling sirens are just another noise on the road to nowhere in Dhaka. No one even gives them any sort of right of way. They are just another vehicle in the way to get someplace.

Red lights are mere suggestions to stop, and not many people take the suggestion.

This is a good place to stop. Picture of the next topic are kind of necessary, so I'll put that off until I have the pictures of the tuk-tuks and the buses

Posted by Dorothy Macaw at 6:26 AM