I had a nice laid back tourist day. None of this all day stuff. Just a couple hours in the morning and a short jaunt in the afternoon. The rest was laying around and reading my book. That is the way a vacation trip should be.

Last evening I was in the room and there was some sort of banging from a building project on the property next door. They were building a metal tank and beating it into submission and hitting it with an arc welder. It was after dark maybe 8 pm. The Red Devil on my shoulder told me to do it. I succumbed in my bag I carry a laser pen from previous trips to Egypt and Cambodia. I haven't used it all that much, because the laser is so intense that if everyone used them on paintings the art would fade, so I have only used it on rocks that better not fade. While the men were lost in their work I shined it on the wall and then the floor they were working. You could see one of the guys follow it and look for it again. I waited … patiently and when he relaxed his search waited a bit more .. then did it again. This time he really started looking for the point of origin. Finally I was busted. The stared at me and wouldn't turn his back on me again. Darn, the next point was going on the welder's butt too. Phooey.

After the best night's sleep this trip I made a cup of Starbucks and went outside to sit and sip. I thought I was in Egypt and the mummies had come back to life. The doorman had his jacket zipped up to his chin and his parka hood up. The guys in the passing rickshaws all had on jackets and most hat hoodies up and they weren't even trying too be Gangsta'. I found a perfect summer's evening, they found it the dead of winter.

and a pretty good buffet breakfast I grabbed Nikon and headed out. Yesterday when I was smoking in front of the hotel, the head of security came over and tried to talk. Unfortunately even in this tourist haven English is not very good. I had better understanding in Chittagong. So he and I spoke a little. I slipped him a bill and thanked him for taking care of me.

The met me at the door and we passed the “How are you”s and I walked across the street to get a bottle of water. Wend I turned with my bottle of water, Mr. Security was there. I guess he took his tip seriously. Then it was where are you going. I told him to see a Buddhist temple in Ramu about 8 miles out of town. I flagged down a CNG (that ran on gasoline) and was about to start negotiations when my protector walked up. The next thing there are three of four rickshaws, another CNG, two uniformed security officers and the plain clothes head of security. - I was a total after thought.

The driver pulled out his phone and read his phone number which security added to his contact list. Then wrote down the CGN tag number, I'm surprised he didn't take the guy's mug shot. He then turned to me and gave me a price and said to pay it to the hotel and he'd pay the taxi upon my return. Okay if you say so. I pulled a bill out of my pocket and handed it to the security officer.

We left town following the same road that I came in on yesterday's bus. Playing “Dodge Bus” in a bus is a total, and now boring, game than it is when you are in a motorized tricycle wrapped in sheet metal. The hotel had offered to rent me a car and driver, and maybe I should have done it.

I am staying it at Cox's Bazar. I think they spelled it wrong. Either that or every man here has peter fleas. I haven't seem so much scratching since watching the Grizzly bears rub their backs of the trees on the Wonderful World Of Disney. At least I hope they are scratching. 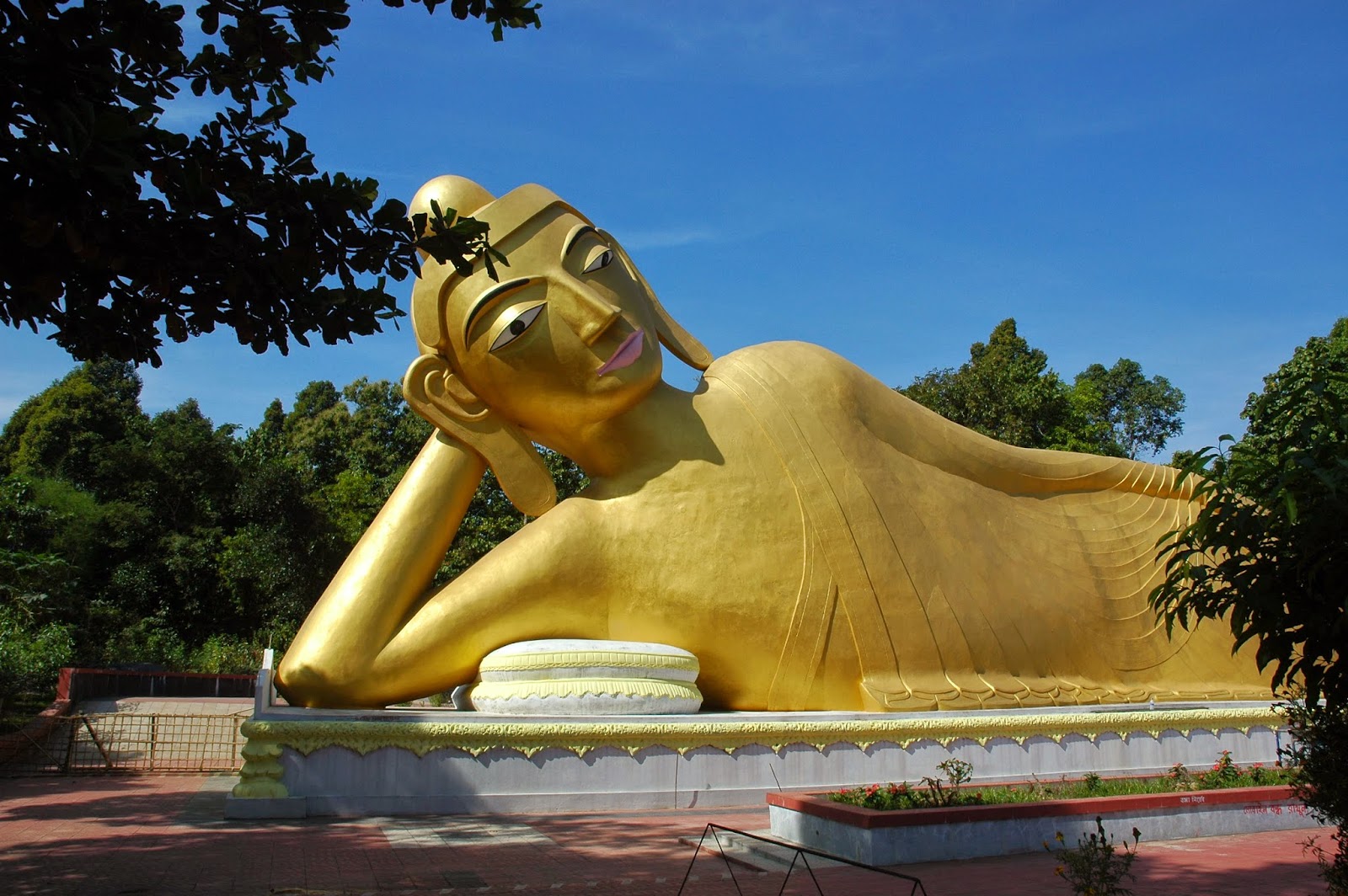 The first stop was a Buddhist temple that that the nation's largest reclining Buddha. Lots of 'est things in this are. Cox's Bazar is set on the Worlds longest continuous ocean beach. Something like 110 miles. I''ll report on a couple hundred yards of it tomorrow. I hopped out of the CNG and started up the steps after removing my shoes and a family coming down the stairs wanted my picture. Sure. I might hurt your camera but I'll be a good sport. Half way up another family and same thing, only this time with daughter and mom (I ran into them at a later temple and that time it was with daughter and son). I hope
I keep this in mind the next time I want to take someone's picture. It is a bit intrusive and a gift given by the person in the photograph.

At the top of the stairs a young man lammed onto me and started the dime tour. This reclining Buddha was 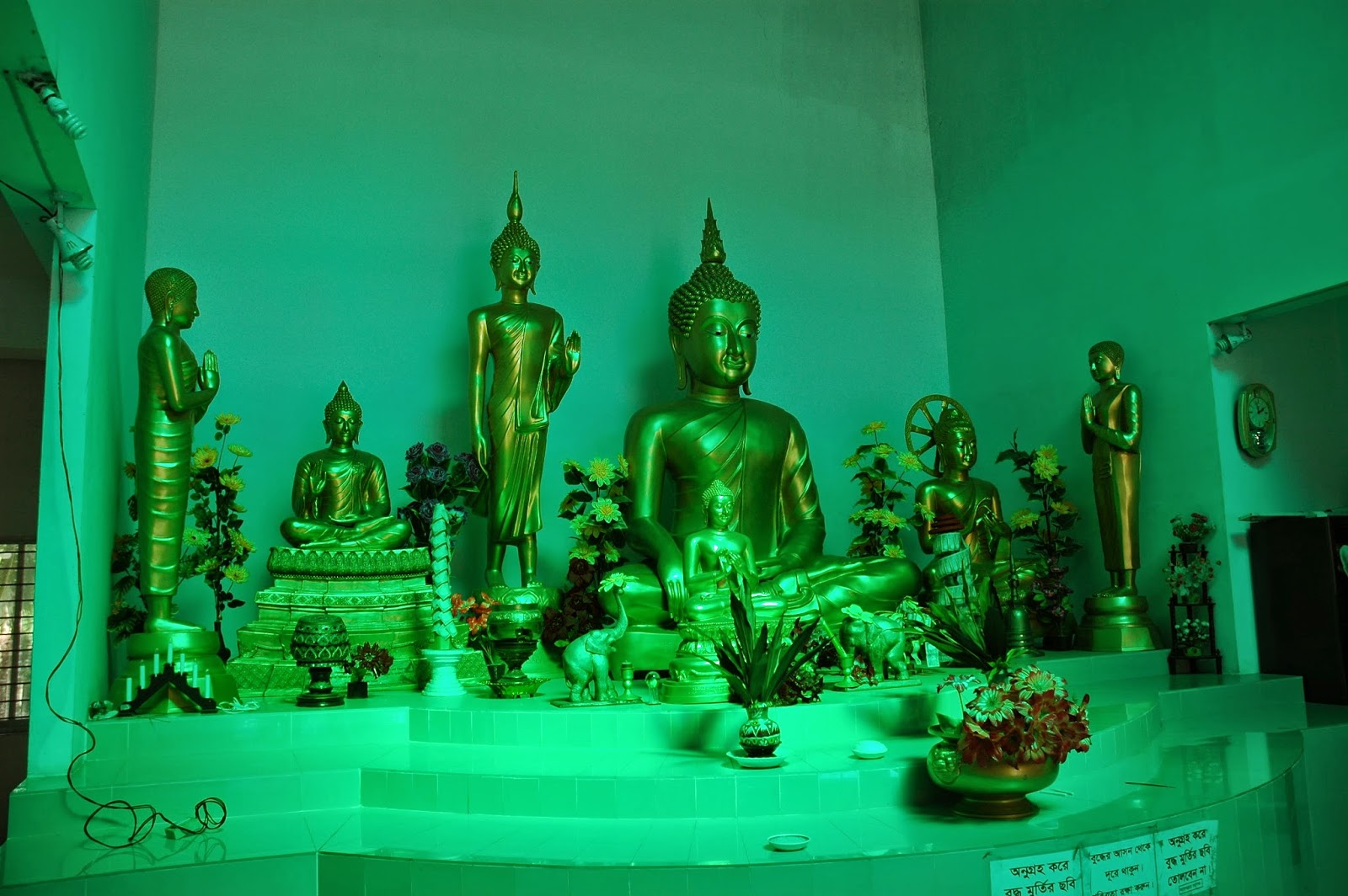 nearly brand new. In 2012 there was some sort of hostilities between the Buddhists and the Muslims – I am not sure if the army came in a settled things or were on the aggressor’s side. Again language. I put a little bit into the donation box and did the rest of the buildings. Since they were only a couple of years old that didn't take long. At least here Buddha isn't surrounded in a halo of LED lights.

Back to the CNG and off to the next stop. Same thing here as well. Some of the out buildings were older than 2012 but the main temple was certainly no more than a couple years old. Of course the teenage boys poorly practicing their English. He knew about Obama and he knew New York. He got Obama right as our Prime Minister, but I think New York eluded him. He kept asking for New York money. It was much better than Bangladesh money, it was bigger. Then he started talking about the president of Iraq and my ignorance showed.

There were pictures of before and after 2012 along with the ruins with Army men and vehicles in the pictures. I took a picture of two and went back to the CNG. We got back to the hotel after he took a phone call which I think went like this – This is the hotel, where are you? We are on the road heading back, we're just passing …. . Once back at the hotel I found Mr Security and the driver and I walked over to him. I made sure he gave the driver his full due and didn't take a cut off the top. I gave the driver enough got a couple liters of gas, and slipped the security man a little.

This hotel is number #2 on TripAdvisor and probably number two as far as cost in town as well. This makes the front of the hotel in environs prime pickings for beggars. The old men you can brush off (unless they are missing a limb, then I donate). I thought the women with their sari's in their mouths were bad until I ran into the girls. Tap, tap tap. Tap,TapTap. TAP, TAP, TAP. I was about to brain the little bitch until she gave up after a block.

I have heard you can take the girl out of the country, but you can't take the country out of the girl. That was never more true than here. This hotel is about $100 a night with VAT. While sitting poolside reading my book I looked up at the balconies you witness a woman washing her hair on the 5th floor and another on the 4th floor squatting down cooking dinner. Make no mistake this is a vacation spot for well off Bangladeshis and the dust from the farm follows them even here.

Oh ! Did hear there was a English couple here today. They sat right over there! At least that is what the man in the coffee shop told me.

That should do it for now.

Posted by Dorothy Macaw at 7:19 AM