Stuck in the mud

I spent the day exploring the city by CNG (Compressed Natural Gas) otherwise know to us as a tuk-tuk, and pedal rickshaw and auto rickshaw ( pedal rickshaw with an electric motor to augment the driver). Unlike Dhaka this town has hills. One poor rickshaw driver was walking me and the rickshaw up a hill when I called it quits a couple blocks before my destination. I just could let him work that hard. I had a few thing to check off my list and saw maybe 2/3rds of them. The other third, I just couldn't get the idea across. Things like the World War II memorial and cemetery. Where allied forces are buried. I am pretty sure we were close once or twice but that doesn't count when you can't experience it.

This morning started out with a horrid tragedy. I thought my hair dryer puffed it's last. It one of those dual voltage ones. What makes it dual voltage is when you turn the dial to 220, it blocks off the switch from going to High. Anyway I plugged into the adapter for to make the US blades fit into the round holes. Turned it on and it started and died. I fiddled with it a bit and it was dead. Then just on the off chance it was the adapter I tried a different one and the birds sang and the angels sang Hosannas. In looking at the bad adapter I noticed it had a fuse and that is the only thing I can blame it's malfunction on.

I generally sleep in only a T-shirt. I got up and made some Starbucks instant, pulled on yesterday's pants and a pair of boots and walked out to the nearby main street to watch the city awaken. As I was sipping my coffee and smoking a cigarette and man walked up and started a stilted conversation in passable English. Five minutes into the conversation he asked “Are you a man or a women?”. I told him, female. He shook his head and said, “No you are not. Women don't smoke. Women have hair down to their waist and your breasts are too small. I had never hear my boobs were too small. Maybe if I had a bra on or he would have looked down to my waistline he would have seen them.

After breakfast the CNG took me to the river since that is where every city is born. Always by the water is 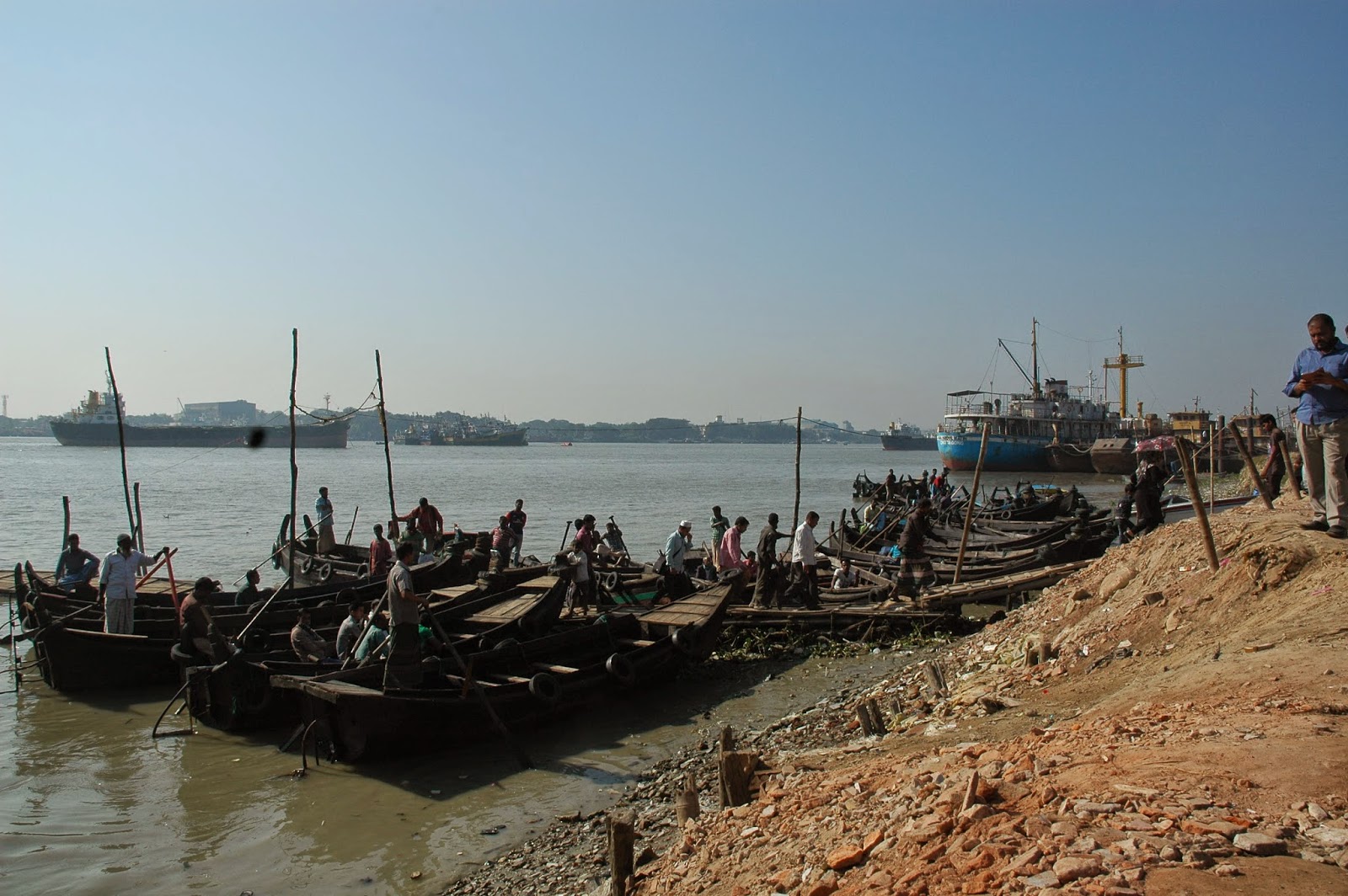 old town. The river here is huge. I can't explain it's width. Possibly half a mile. Full of huge ocean going ships and of course the small local transports. The one's in Dhaka are oar only powered, these today were motor boats with oars only used to move within the docking area.

A few clicks of the camera and then heading up the first alley I see into the neighborhood. Not much new from Dhaka's streets of yesterday, except the traffic was more manageable. Lots and lots of “How are you?” called from shops and passersby. Occasionally somebody would like to talk. One man I was talking to I told him that I had only seen 2 western faces in the 4 days I've been in Bangladesh. He said “Oh, no! I saw a French couple just last week …. or was it the week before?”

Boy can I draw a crowd, just by standing there. People stop and just stare. I doubt I'll ever get used to it, 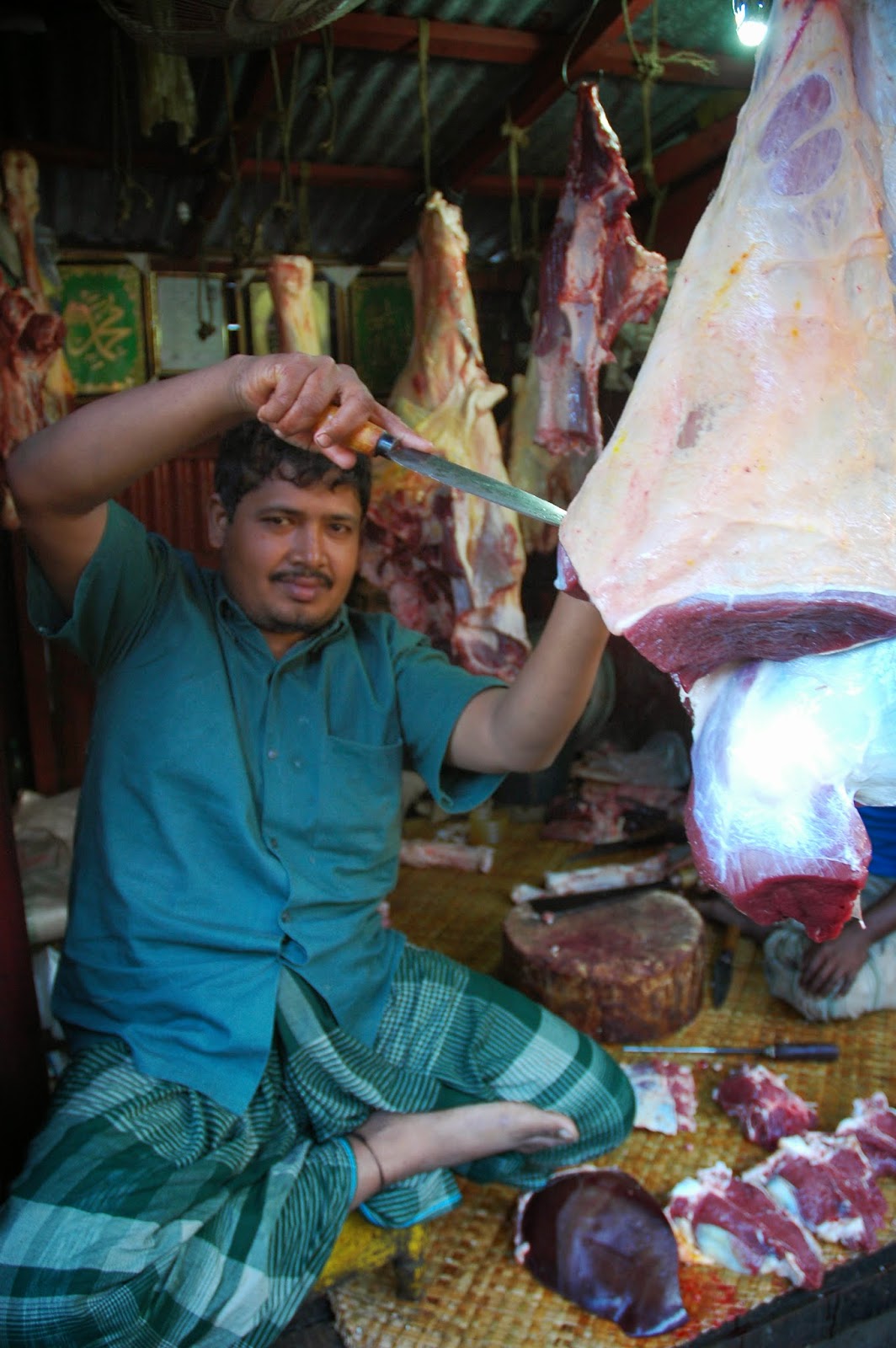 but I'm learning to accept it is the way it is. At one point there were so many children in my wake that when I stopped traffic was blocked. After that I didn't stop until I was out of the neighborhood. In past trips I often asked if I could take a picture of someone. Here people are begging me to take their picture. When I say yes, they pose. One butcher got out his knife and went to work on a leg of beef so I would take his picture.

I had a lit of things I wanted to see and saw some. Think I saw some and never saw some. I'd hail a auto-rickshaw and say I want to see E-Majid. E Majid ? Never heard of it. I'd say it again slower and say it fast and they would just shake their head. Then someone with some English skills would wander up and say “Where you want to go?” E Majit. He's say the exact same thing to the driver and the driver would go “Oh, E Majid ! I know'” With a subtext of 'why didn't you say so …'

Eventually 20 and 30 year old mosques get old on my tourist brain. There isn't much old in town as far a mosques and the one that are truly old, we rebuilt a new and improved version in the 1950's. I wanted to see the ship breakers north of town. I knew it was a long shot since they are really shy of camera toting white people, after they had been blasted in the Western press over child labor, hazardous working conditions, ecologically unsound practices and on and on.

A long CNG ride got me there. Lots of pavement under our wheels and then another mile or so of dirt path got me to the gate. I was told by the all Powerful Oz to go away. I even tried a small bribe which did not work. I strolled a 100 yards to the next gate and, well at least he didn't laugh at me.

Then came the “Aha!” moment. If I walk down that embankment over there and follow the well trod path the fishermen use to access the beach I can get a look at the ships from the side by looking up the beach. “HaHaHa Ha! So there Mr Naughty pants!” I followed the well trod part. Had to jump a few river-lets before the path petered out. There was like ½ an inch of water over the mud. I had boots on. I was good to go, until the second step where I sunk into this shoe grabbing gunk over the tops of my hiking boots. Then it was step, pull and hope your shoe stays on and you don't fall on your face. I was two-thirds of the way to the breach, darned if I was going to turn around now.

I came to the end of the wall and could see one of the ships high and dry beached. I went to raise my camera 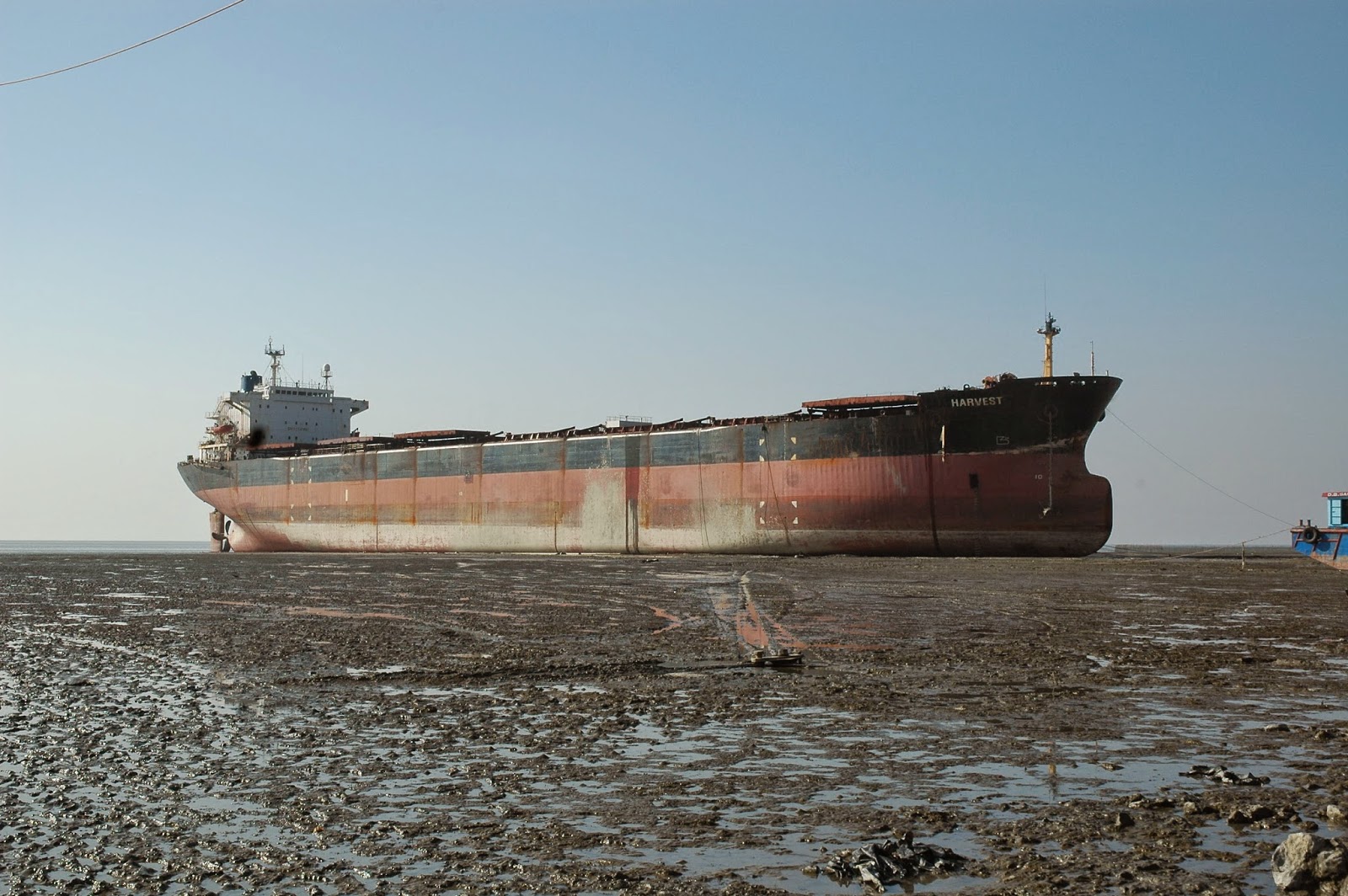 and a man came to the end of the wall and said “No Pictures”. I explained to him the fine differences between private land, where he was and public land where I was. He told me I was more than welcome to shoot thataway, but not thisaway. I had my camera at my waist and shot a few frames blind. Then we got to talking. His first question was – are you a journalist? No, just a tourist. Are you with a group? No, just CNG. I did take a couple fairly well framed photos as he seemed to be softening.

After my two or three camera clicks I started back. As soon as I made it through the muck to the beaten path, he yells “Go back ! You can take pictures. It's okay.” Sometimes the world never ceases to amaze me. BUT, I wasn't going to muck about again and headed back to where I left the CNG, to find the CNG had left me. So I'm a mile from pavement and 5 miles from town with my boots weighing 10 pounds each with loaded ucky black mud which stretched up to my knees. This is way more of an adventure than I had signed up for. A small shack was right over there, selling tea, cigarettes and cookies to the fishermen. The owner told me to sit down. I waved him off. Then he told me SIT DOWN ! I sat down. I bought a Fanta from him and passed cigarettes around and we had a grand old time for the 30 minuted before why woke up the rickshaw guy and got him to the shack. It really was a nice visit. Their hospitality was outstanding. Meeting them was the high point of my day.

Rickshawed back to the highway. Found a CNG and made it home to the hotel, leaving my shoes on the front steps and getting promised they would hose them off and get them up to me in a while.

Now time has to come to dine.

Posted by Dorothy Macaw at 8:06 AM