Well like most mornings while on vacation, it started early with the call to morning prayer at 5:15 am. I had beat him out of bed by fifteen minutes. Haha.

It was about 70 degrees out and the guard was wearing his parka and hoodie as were the rest of the people passing by. I was in a sleeveless top, pants and sandals and very comfortable. 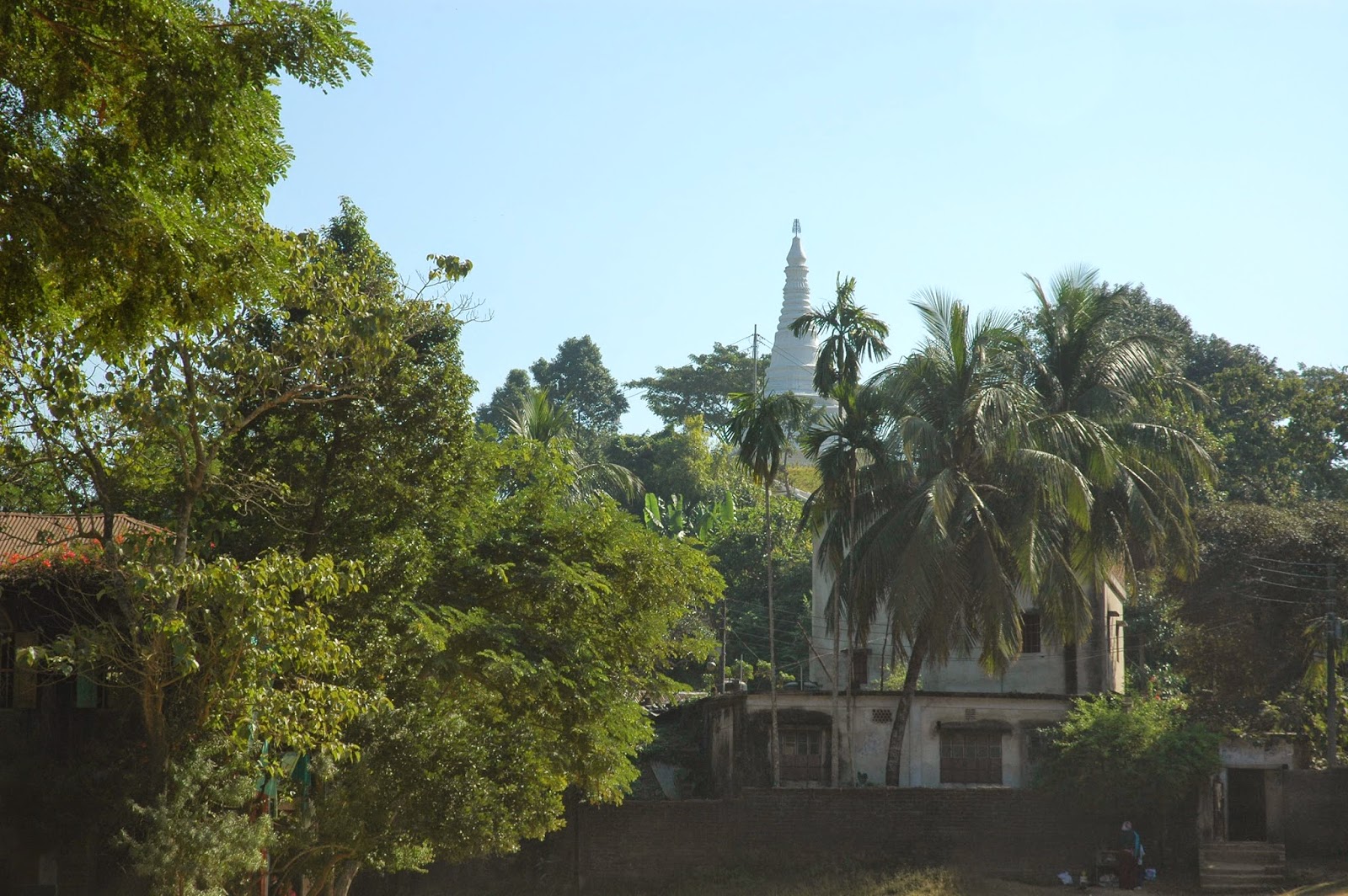 I did my breakfast thing and then hit the streets to look around the town. There is a Buddhist temple in town and everyone I asked about it was – Ya, it's just down the road and turn right. Mr. Security is becoming a bit of a pest. Anytime I have an interaction with a local person he is right there seemingly yelling at the poor guy. The poor electric cart driver was viably cowed, and negotiated a pretty rock bottom price to get me to the temple and back.

The temple was a little more than just down the road to the right. It was two or three miles from the hotel. I did find that the town of Cox's Bazar is a real life town though. Not just row upon row of high rise hotels and restaurants. It was kind of a quaint town. Vibrant and full of life and warm friendly people.

After yesterday's somewhat disappointing temple tour the one in Cox's Bazar was exactly what I had hoped for. Old, wood floors and beams. Dark and a bit spooky. The shrines were rather lacking pizzazz but at least they weren’t built in 2012. The temple didn't open until 11 am for visitors, and of course I was there at ten. But since I was 'Special guest” (read: American with N.Y. Money) I was allowed inside. It didn't take a long time to see the shrines and grounds. Especially after being hit up for a contribution to the orphans who lived nearby by the man who was walking me around. I gave him a minimal amount as the funds he used as an example of the money for the orphans was a wad of bills pulled directly from his pocket. I think the only orphan who was going to see that dollar was him.

Back off temple grounds my driver and I met at the candy/cigarette/pan store and I asked him what he needed to go to the fish market. He gave me a price and I rounded it up when I wrote it down and he gave me a big smile.

The fish market was absolute pandemonium. A large concrete building with open sides and fish on the floor 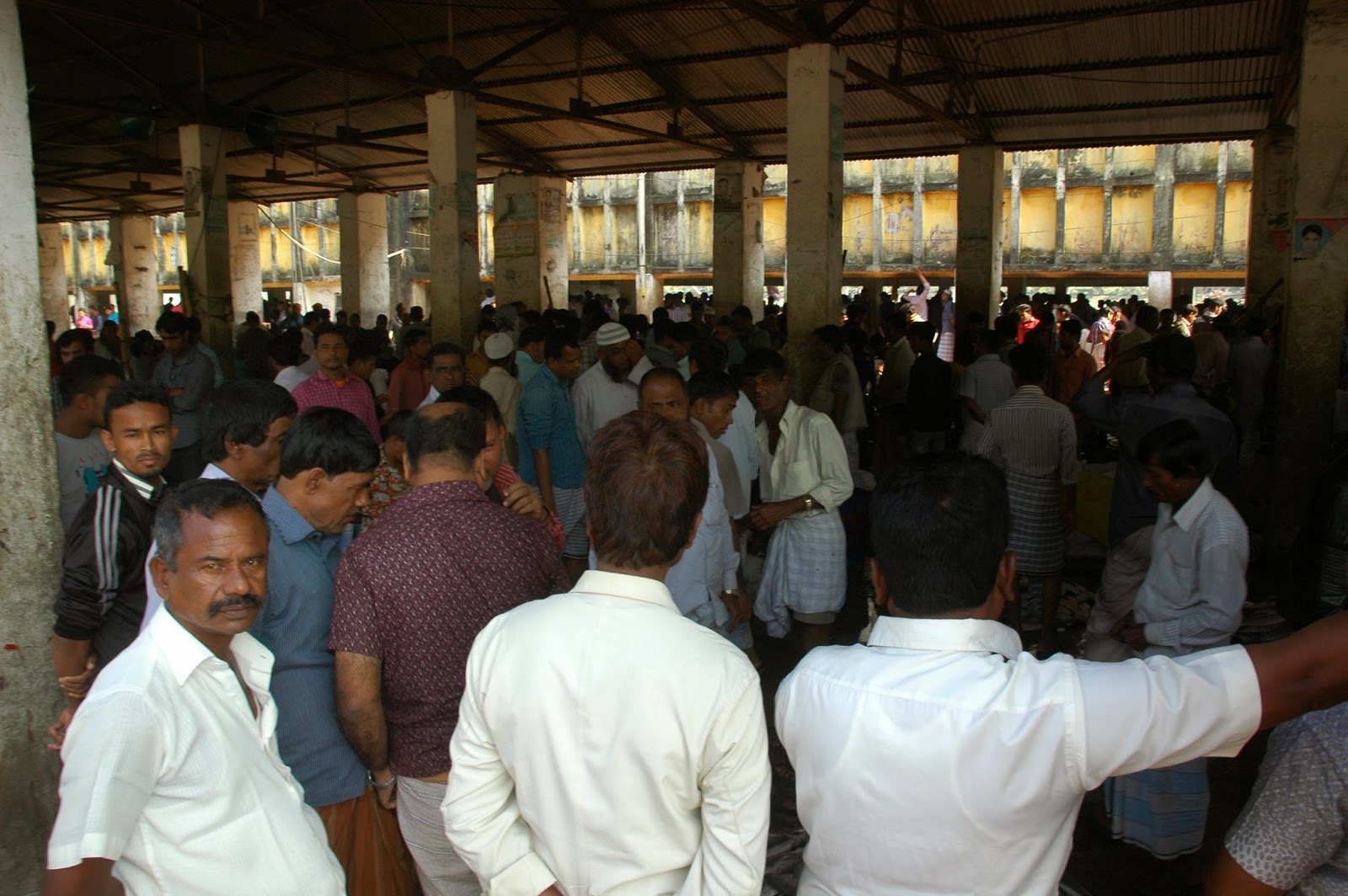 and hundreds of men all bidding on the price of the various fish. Some fish looked like fish. Some eels. Some sting rays and baby manta rays and some fish that looked like they were from the Jurassic period. Weird bottom fish with wide heads and almost spines down their back. Maybe like a Sturgeon, caught for the very first time (sorry Madonna). My driver was going to show me a different fish when the next time I know I'm laying of the wet concrete. My fingers are tingling and people are around me yelling for me to get up. I kind of wanted to sit there for a couple moments and get the scrambling to become unscrambled. But I got up and my driver escorted me back outside. 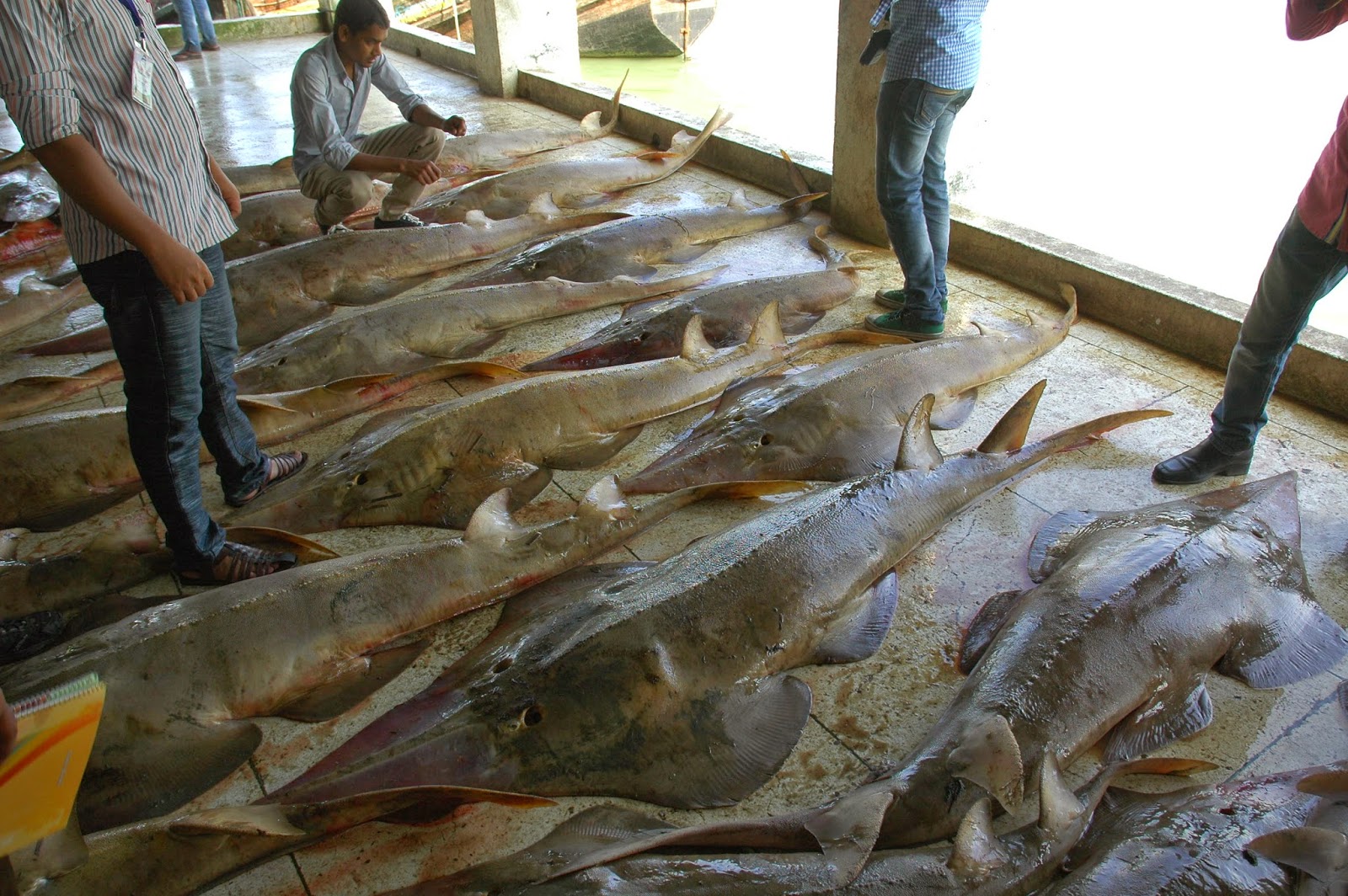 I looked at me hand a saw blood and then noticed my left boob was covered in blood as was my hair. My sunglasses were on a strap around my neck hanging down my chest acting like collection cups for offering to the fish Gods.

You know there is nothing like seeing someone covered in blood that makes things happen. Everyone around kept yelling go to the doctor! It was a scalp wound. Head and scalp wounds bleed like there is no tomorrow, but they weren't having it.

My electric cart driver moved pretty quickly through town to the hospital a little faster pace that he generally puttered around at. He stopped at the hospital, jumped out without setting the parking brake and the cart started rolling. I grabbed it and kept it from rolling too far away.

The entrance to the hospital was jammed with women and the guard had the grates closed so that only one person at a time could get through. My driver grabbed my hand and actually pulled me through the throng and into the hospital and then into the room marked EMERGENCY. I was feeling a little woozy and was happy to sit down. The room had four or five gurneys in it all arranged in a semi circle. None of this sheets on the gurneys, just plain blue plastic. No curtains just an open room with the other patients and their families and who knows who else. The (I think) doctor had me lay on the gurney and I was pretty glad he did. Things were getting a little funny – like I better get low so I don't hurt myself when I fall.. He fiddled around and I heard a noise of paper ripping. I sat up and he showed me he was just opening a new razor to shave the area. I'd just had my haircut before leaving the states. He was going to ruin it. Let me tell you he was not gentle. I felt like he was a chiropractor as he forced my head into the position he wanted me in. I heard the words “No stitch” and breathed a relief.

He asked for maybe 75 cents (60 Taka) for something and gave it to a nearby kid. The kid came back with a freshly sealed syringe and a glass vial that you had to break the top off to fill the syringe. I looked safe enough. I think looking a the medical instructions he gave me it was Tetanus vaccination.

He wrapped my head like a fife player in a revolutionary was picture, gave me a prescription for three things and pronounced me well. I asked who do I pay and he mimed it was nothing. I told him I had to pay something and gave him a ten. I didn't know what else to do.

Again by the hand my young driver pulled me through the mass of people at the hospital's door and back to the fancy golf cart. Next stop pharmacy. A course of antibiotics, pain medication and anti nausea. Each package of pills the pharmacist drew circles on it for me and explained the course of treatment. On the pills for twice a day got two circles and the three times a day got three circles. I guess they are used to illiterate Western tourists. - the bill ? Almost exactly $10. Less than my co-pay with my HMO.

We got back to the hotel, all the while the kid driving kept checking on me. We pulled into the hotel's drive and most of the staff came out and asked what happened. There my mouth made a BIG mistake. “Oh, he and I got into a fight.” I thought they were going to lynch the kid after pulling him apart. WAIT ! WAIT! STOP! STOP!. I had an accident, he was perfect, he did everything right. He's a hero. Stop!

I don't know what was going on after I was shoo'ed away but they kept him in the drive talking what looked to me rather harshly. I have not idea what that was all about. The boy did a fantastic job.

Nikon took it a little worse for the wear. He flap that holds the battery in was on the floor (recovered). I don't think it is broken, just popped out, but I fear if I try to fix it I will break it. When I went to remove the lens though – you remember those Kaleidoscopes you had when you were a child with the little colored beads in the end that tumbled and changed as you turned it? - it sounded the same way. So much for photos the remainder of this trip. I had to pry off the lens cap and look at the damage. It was just a Skylight filter over the lens but it was a total DOA. I chipped out the pieces and jammed the battery in with my thumb and shot a picture. Everything seems to be OK.

Things are okay here. Concussion dot com or some other Google result said look for uneven pupils, vomiting and headache and none seem to be happening. So I am taking it easy the remainder of the day. I don't know maybe I met my match with Bangladesh.

Posted by Dorothy Macaw at 2:15 AM