After going to bed at eight pm, because at Eco-resorts there is no TV and the electricity is low voltage the lighting is less than optimal for reading. Besides I was tired and knew the cost for shutting down at eight was awake at O'dark-thirty.

I lay on the bed as the day slipped away and then heard the high pitch dive bomber sound of a mosquito. Back on go the lights and down comes the netting. I had hoped that the ceiling fan blowing straight down would have dissuaded the little suckers, but no the 'skeeters here are professional grade.

Awake before the sun. Made some coffee and took a not so hot shower. Had a little toast and jam for breakfast and was on a motorbike heading to the ferry landing. We stopped at the top of the bluff and I wandered down the riverbank and then the half a kilometer across the sand to the ferry with the landing craft nose. Sloshed to the ramp and was soon waiting at the railing for it to lift it's nose and get to ferrying. Then a little boat pulls up next to the landing craft and everyone abandons it and heads to the little boat. This is the real ferry.

Fifty people on a vessel that at most could hold twenty. Not a life jacket in sight. One of those fillers at the bottom of page 5 in the corner. Ferry capsizes, kills fifty. Maybe the Herald might put it on page 3 since I am a local. One thing to say though it was a thousand times easier in the day light than on a moonless night in December. 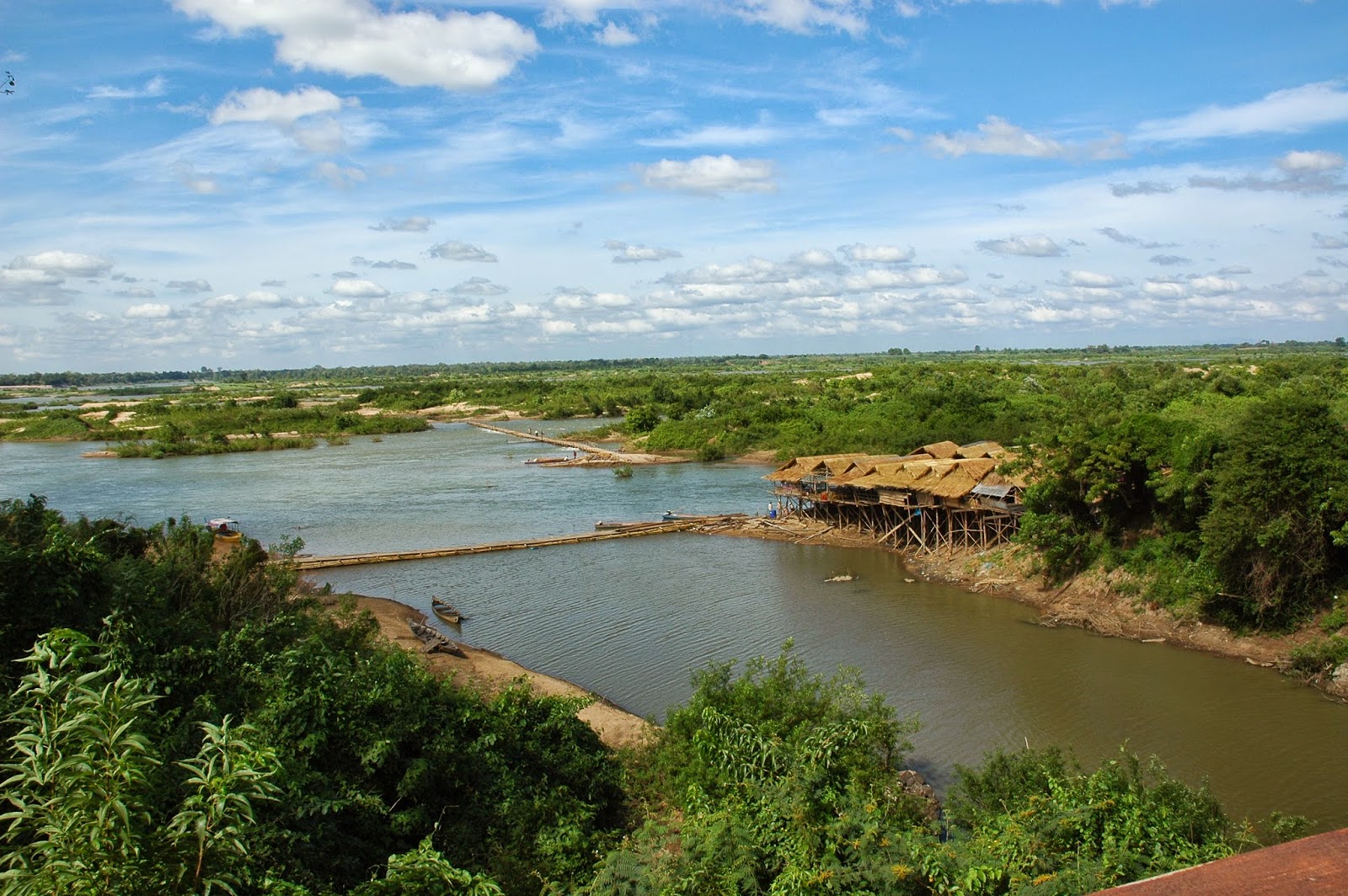 cigarette from the first person I saw smoking. Then I slid on over to the first tuk-tuk I see and ask him what it takes to see the dolphins. He gives me a price that I think is a little high in very poor English. I cross the street looking for a tour guide office to get the lay of the land and another tuk-tuk pulls up next to me and in very good English says Want a Tuk-tuk? How much? The quoted price was 50% higher than the previous guy! Which I pointed out. “Yes, but he doesn't speak English and I do very well” My reply is “Well, there is value in that.” and hired him.

So we bounced and jostled our way over bad and worse roads to the area where the Dolphin's boats are moored. Along the ten mile journey we pass through villages, occasionally a child will call out Hello and wave franticly. I always try to wave back, but sometimes they are inside and I don't see them until too late. One of the villages was the bamboo rice manufacturing center for the area, so lots of those roadside stands. Smell of smoke and the smell of cooking rice and the occasional skunk like odor from the swamps.

I pay for the boat. One boat one price. Regardless of the number of passengers. My driver asks if 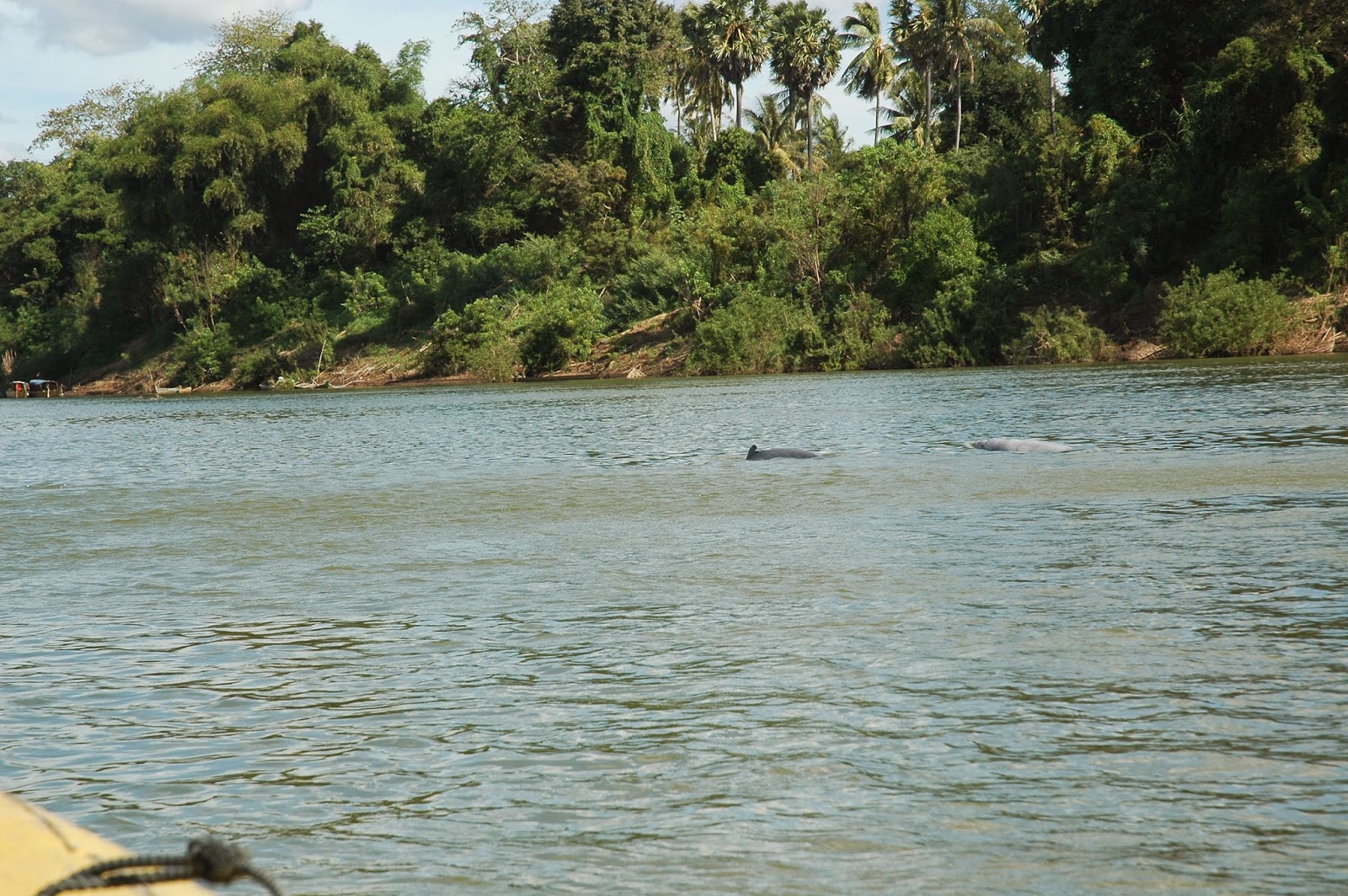 I want him to come along. I tell him it is totally up to him. I'm good either way. He came along and I am grateful. His knowledge was a real addition. Besides another pair of eyes looking for the dolphins never hurt.

They look to be around ten feet long and are kind of a pink color. If you have ever been Orca watching you have seen the King Sized and enhanced version. You can hear them blow when they come to the surface and then just catch a glimpse of them as they re-submerge. Really peaceful. The dolphins were directly in front of where I got on the boat. The skipper ran the boat for maybe a minute 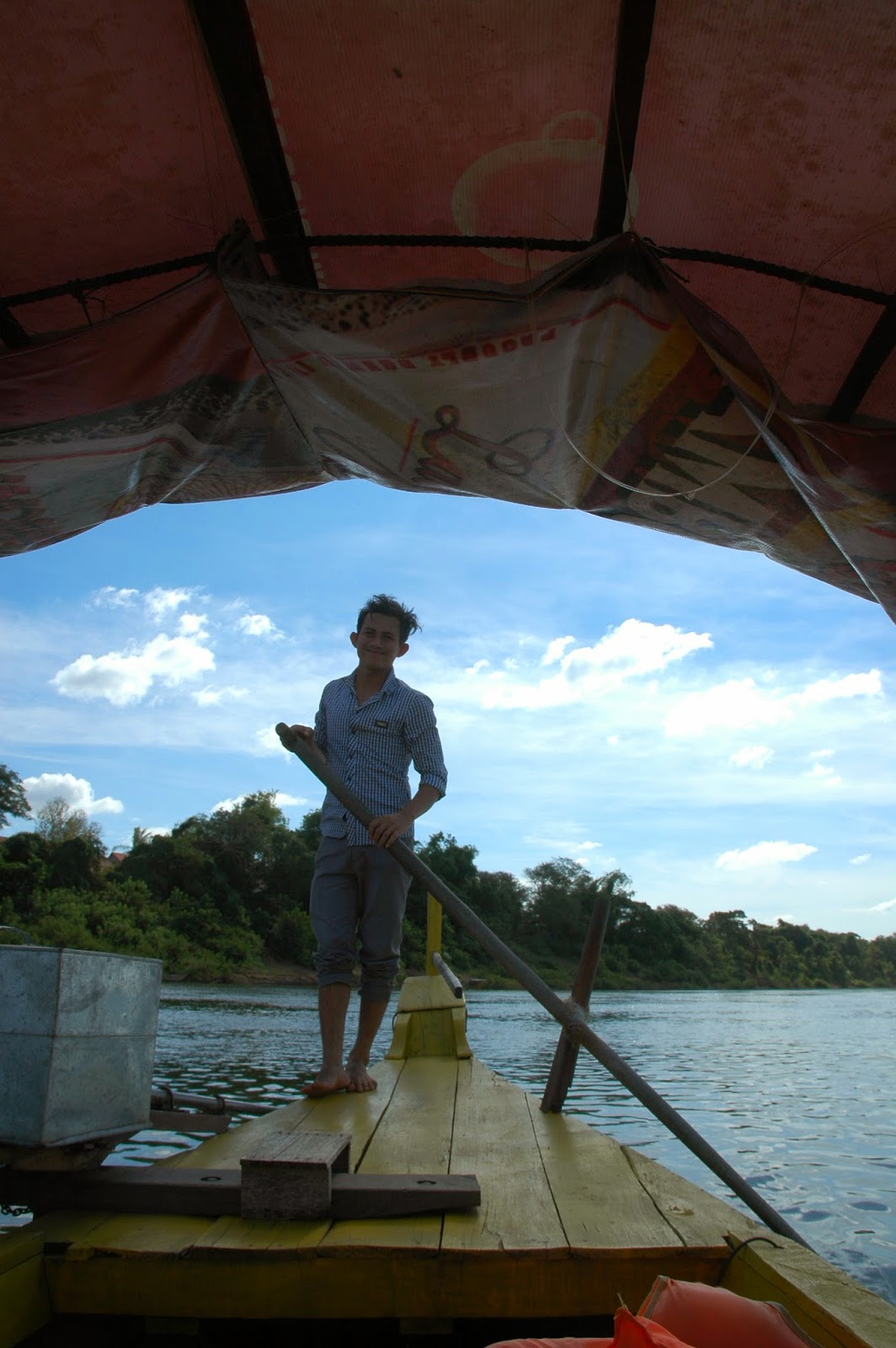 and then just slowly rowed the boat to keep it in place. The dolphins stayed around us swimming upriver and surfacing for air on the way up and then staying submerged and swimming down with the current. I got some pictures, but mostly just watched and listened. They don't breach like their big cousins and I knew the pictures would be okay, but just okay. I got a shot to prove I had been there, but that was about it for the camera. After about forty-five minutes they moved of, the wind picked up and I didn't think I would see anything new by trying to follow then so we pulled back to shore.

The reason the dolphins stay here say the tellers of tails is that – Once upon a time – A young girl's parents heard that if you married your daughter to a large snake that wealth would follow. So a suitable snake was found and he and the daughter were wed. - On the night of the nuptials the mother and father were listening to the bridal chamber as the new bride and her husband grew to know one another. - Now the snake being a snake, decided that she would be a wonderful tasty morsel in his belly. - As the girl is screaming, the parents are congratulating themselves on the wonderful number of grandchildren to take care of them in the old age.- After a time there is total silence and they wonder why and peek in to see the snake with a hugely distended belly and no girl. - At once they leap upon the snake and cut it open and release the girl. - She is covered in slime and muck from the inside of the snake and walks down to the river to wash it off. As she is washing it off, she slowly turns into a dolphin and swims away into the river. - And that children is how the dolphins came to be in this area.

On the ride back to town we stopped at a 400 step monastery. I made it 275 steps until the last 125 which were straight up the side of the mountain with steps built for smaller feet and no handrail. The going up was not appealing, but the going down would have been sheer terror. Not one landing, not one switchback just stairs in a straight line. One slip and .. well you know and.

We took the long way home back to the ferry terminal. I picked up a bus ticket to Seam Reap which he promised me was only nine hours. We shall see. Back at the hotel I wrote the previous entry and loafed around doing exactly what vacations are designed to do.

Dinner and here we are at the conclusion of a very nice day.

Posted by Dorothy Macaw at 6:04 AM