The Towers of Silence and the Washer women's blues

Well I stayed awake all the way until 6 pm. If I was home I probably could have found something on the television to entertain me until nine or so, but I didn't feel Ike a couple hours of SKY news or dubbed action movies.

I didn't have the best sleep of my life, several unusual dreams, but other than a few times getting re-hydrated slept through until about 3:30 am. Not too bad, nine hours. Made some in room coffee and puttered on the computer, took a shower and basically killed time until 7 when breakfast was prepared.

Breakfast was about what I have experienced in most Asian hotels. A buffet of 10 things, an omelet station, breads and fruits. Tang orange juice, good tea and so-so coffee. I ordered an veggie omelet that was a 'little' spicy. It was good, though a little more spicy than a little.

The main lobby is generally a manic ball of chaos, but early in the morning, I kind of outlined what I wanted to do with the desk clerk and asked him to write it out in Hindi for me. I got English.

I stepped outside and had one of the men hustle up a metered taxi. Told him what I wanted to see and we were off. The first stop on today's trip was Church Gate station. Everyday the man of the house goes to work in the morning. Wifey stays home and makes his lunch. She packs it into stack able metal containers maybe three or four containers high, called Tiffin tins or Tiffin boxes. These latch together and she gives them to the local Dabawalla who gets it onto a train where it is taken to this station where it is redistributed to other dabawalah's and delivered somehow magically to the right men in the right offices. This is done totally without any help from computers, just some obscure script on a tag on the Tiffin. They do this for millions of meals a day and never miss, or so they say.

We got to the Church Gate on time, and was reminded it was Sunday and no Tiffin deliveries on Sundays. Fiddle sticks ! I did wander about for a bit watching men take loads that required two other men to lift put the load on their head and calmly walk away. That was magic in itself.

A drive past the really beautiful Chowpatty beck and then up some hill in search of the Towers of Silence. I remember reading about them in a 1940 copy of Ripley's Believe It Or Not! Tall towers where the dead are placed in the open and the carrion birds pick the corpse clean. Sounded better t me to feed the crows than to cut down a tree because you died. We drove around for some time and couldn't find it and finally I gave up and old the driver to head to the next stop, Dhobi Ghat. 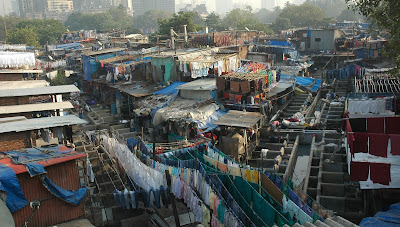 What the Tiffin wallahs do with the tiffin boxes, Dhobi Ghat does with fabric. Your clothes arrive in a bundle there dirty and leave in a bundle clean. All work is done by hand and line or roof dried. Vat upon vat of washing stations seem to vanish into infinity. It didn't seem too busy today, probably because it was indeed Sunday, but I could see how it could be crazy during the week. I strolled through the surrounding neighborhood. Not slums, but certainly a lower working class community. I finally got brave enough to enter the actual washing 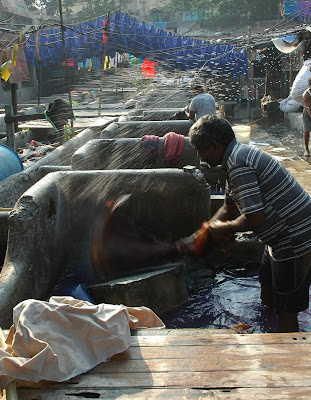 Ghat area and didn’t feel totally welcome, nor did I feel unwanted. Just another crow flying by. There were a couple kids who did know enough English to ask for candy and when that failed for chocolate and then tried their luck at money. They came away empty handed.

Back at the taxi I noticed a tour bus disgorging passengers and had my driver come with me while I asked if he knew about the Towers of Silence. Sure he did and he rattled off directions and my driver nodded his head and the hunt was again afoot. Back to the same place we looked previously. I wandered through nice park, but that wasn't it. We stopped and asked a man on the street and he directed us a little further down the road with a left at the corner. Then two men on the street who smiled and waggled their head. Finally a fine dressed lady told us we had passed it and to make a U-turn and go back to the corner where indeed there was a little paved street going up the hill. We drove up found the parking wallah and were immediately told that I was not allowed to enter. I never did figure out why, but he was insistent that I get along little doggie.

Back on the road to the lasts stop for the day the Vee Tee. The Victoria Terminus train station. It has been renamed after some Indian man, but if you say V.T. to anyone you'll get there. It was built in the 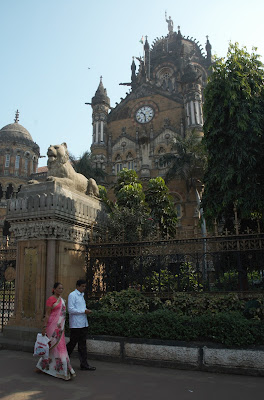 mid 1800's with all the geegaws, gingerbread and gargoyles that Victorian England could muster. You could look at it for an hour and still miss many of the details of the building. It should be a UNESCO site if it isn't already.

It is also the location of most of the deaths in the 2008 terrorist attacks. I found it eerily creepy to see places that I had seen on the news clips where police sheltered behind pillars and were shot. If it would have been packed with people I can see how it would have been pray and spray for the gunmen. Open area limited entrances and exits. I didn't stay very long inside.

Back to the taxi and back to the hotel, total time about 3 hours and about ten bucks. A couple disappointments, but for the cost of two fru-fru drinks at Starbucks well worth it.

Back at the hotel for a Coke and I think I might be done for the day. Maybe hit the Gateway near sunset, maybe not.