Home in my previous hotel in Kolkata after three days and two nights in the mangrove swamps bordering India and Bangladesh. Home of the Royal Bengal Tigers. It's nice to be back in civilization, and by civilization I mean Wi-Fi.

The morning after my last entry started by schlepping a day pack of clothes and a day pack of camera and computer. The majority of my luggage was left at the hotel in Kolkata. It was only a few block, and it was peaceful. As I said, this town doesn't really get going until around 930 or ten. At eight am, it just me, the chai salesmen and the street sweepers. Pretty darned nice.

The backpack emporium cum travel agency had one customer when I got there. Money and receipts were exchanged and it was just a matter of the rest of the group to arrive. Of course there were the stragglers. Their clocks must have been incorrect. About half an hour late we set off on a short walk to our new home of three and a half hours, a big white 15 passenger van. With big blue letters on the front proclaiming TOURIST. I'm not sure if this is so the vendors along the way can change their price tags when they see us, or makes it so the terrorists know which are the best targets.

In a cloud of Diesel we sped off to our destination, only to stop 30 minutes into the journey. Not stopped someplace. Stopped next to the highway with no explanation that I heard. After another while we were joined by our last passenger. I guess the taxis were on strike (maybe that is why I had such a hard time getting one back from Victoria on Friday) and he had a hard time getting too the bus on time. Now that is a valid excuse even in my book.

Our group was quite a mix of people. There were the four men from Calcutta, office mates, who were on a “Boys Only” weekend away. One guy was married and the other three were single. Around them the entire trip wafted the aroma of alcohol and marijuana. The only problem I had with them was they never offered to share.

Then there was the German couple. They were on a “18 month or whenever the money runs out” trip starting in Nepal and then moving slowly south and east, eventually crossing from the land of the Kiwi and Lord of the rings to south America. A nice friendly couple.

There was a girl, by girl I mean 22, she's a girl to me. Who is doing a study abroad here in India. Home port on her boat, if she had one would read “Boston, MA”. She was so darned quiet at first. I thought I was shy. In the course of conversation with her over the trip she summed up my feeling exactly and totally explained why she was quiet. I'm paraphrasing here, but it was something like- Just because we are on the same 3 day trip is no reason that we have to bond like we had known each other since kindergarten. She eventually became probably the most interesting and smartest people on the trip.

Then there was the mature couple from India. Friendly. That's all I remember about them.

Last was Ramma and Perry. Both US citizens and residents, but still had their noticeable Indian accents. She is a chip engineer and does know the way to San Jose, because she lives there. Perry lives in New Jersey. They met on a dating site and decided to go on a trip overseas together as soon as they met. What could possibly go wrong with that ?

I had known Ramma all of fifteen minutes, making the small - where do you live, where are you going - talk that every traveler opens up with. When I told her my next intended stop, she asked me if she could join me. I told her that I was flattered that I was so fascinating, but I travel solo.

After being around Perry fro a bit I found out he was a man of man accomplishments and many many words, with no substance. If you wanted to know anything, he was the man who knew it all and had an opinion on the subject. Actually several opinions. Don't know if that is what Ramma saw, but it certainly is what I saw.

Not soon enough we arrived as far as the van could go. Everybody out and lets go an a hike through his village. Crowded narrow streets. The typical hustle and pushing that makes India, India to me. A stop at the street corner for one last chance to buy alcoholic spirits or cigarettes and potty.

I didn't need booze or smokes, but the toilet was a nice option, until I was the porcelain options were only the very short one, no thrones. I think I pee'd on my foot some. I hate those squat toilets to pee, I hate to think about the 2 Rupee toilet process. 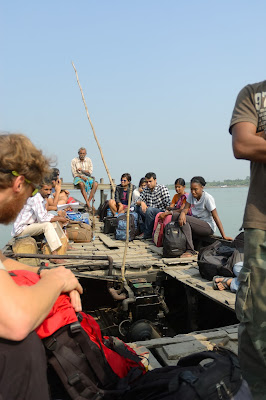 It was the heat of the day, and with each step the day packs got heavier and heavier. Then came the steps down to the ferry. Not one of those white things that has two layers. This one was a squat brown and black boat. The black from the Diesel exhaust. About 1 foot of freeboard. The deck set six inches below the 'railing'. Of course it was overloaded with people and then they loaded the bicycle and the motorcycle. Our guide said we were lucky, they didn't have a cow on today.

The boatman got a big crank out and started winding up the engine and with a cough and a belch of black smoke it putt …………. putt ………. putted to life. I was certain it was going to die. But just as it was about to expire he grabbed a string walked back to the tiller and goosed it to life. We chugged across some water and then exited for another hike through a village until we came to a fleet of three motorized tricycles with flat plywood boards on the back of them. Toss the day packs and your butt down and hope your still have the phone number to your chiropractor when you get off at the end. They were better than walking, mostly.

More waling and more steps and one more ferry and at long last we arrived someplace. Disembark with your goods follow me. Off through a walkway and there we were. First hut on the right was mine. I mean hut. Maybe 15 by 15, plaster covered mud, with a thatched roof home to who knows what manner of creatures. I read once that the reason canopy beds were made was so keep the critters from the thatch from falling onto the sleepers. I didn't see and critters in the room,, but there were a couple lizards t greet me in the morning from the thatch. 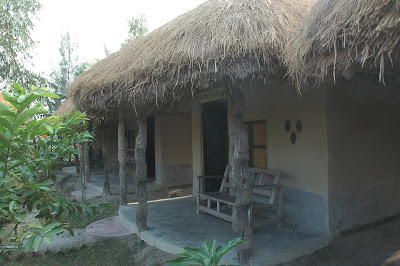 The bed was a huge platform maybe a foot off the ground and almost as soft as sleeping on the floor. Two pillows, one sheet and mosquito netting completed the ensemble.

The bathroom did have a throne, a sink and a shower head. The exposed pipe running down from the shower head had one knob. One knob ? Well maybe they forgot to add the cold faucet. Turns out it was the other way around, no hot. The thing that really disappointed me in that bathroom was there was no towel. NO TOWEL ?? There may not be soap or hot water, but there is always a towel. I guess never say never and never say always in this case.

Electricity was one underpowered light in the sleeping area and another in the bathroom. The room was so dark that you needed the light on. Placement of the switch was on par with the room so far. I needed to walk from the door, through the room to the door next to the bathroom to find the switch. When I bought the tour, I was told to bring a flashlight. I didn't know it was to get to the light switch. I don't remember him telling me to also bring a towel.

Time enough to pee and then back for a village tour. I almost didn't go. I know that they are part of 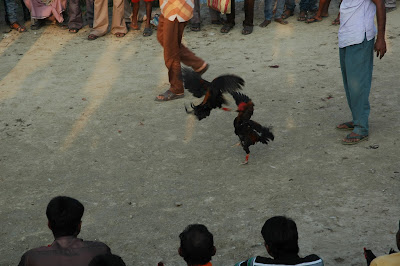 every tour package, but I always feel a bit of a voyeur gawking at peoples homes and yards. I don't think I would like a tour group waling down my alley pointing out my living area and snapping pictures. Ramma wanted to go so I caved in. The village was exactly as most villages are, but there was a commotion off to the right. A crowd was on and below the levy for the Friday evening fights. These weren't among the men though, they were between their roosters. I was about to hang a U turn until it was explained that it was totally non lethal. No metal spurs, just chicken feet. Only until one of the chickens turns and runs. I guess if you are going to have cocks fight this is about a humane way as there is. I watched a couple bouts. One of those, see it once or twice and you’ve seem it enough sorts of things.

Back to the huts for lunch. More food than I generally eat for supper and every bite except for the rice spicy. They must of forgot to add the cayanne pepper to the water. It tasted good but I didn't eat everything that was placed on my plate. Especially not the three cups of rice. I gave my plate to the serving wench and she sneered at me before scraping it off my plate to the ground outside, where the two turkeys came running over. They ran like it was Thanksgiving and I was the turkey. Since I was over Newfoundland for my Thanksgiving, I am glad the turkeys were able to have a belated one on me. 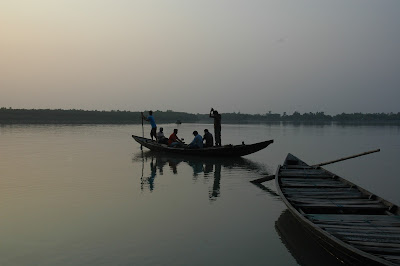 After stuffing ourselves it was time to board two little pirogues to be rowed someplace. I was hot, tired, sick of sitting cross legged on a boat's deck, without life jackets – and mostly just “peopled out”. I did the Ottis Redding thing and was Sitting on the dock of the bay. A bench overlooking the landing. I sat there and watched the locals walk by. Some haystacks with legs, but as it became more and more men cradling their rooster and stroking them if not lovingly, certainly respectfully. I'd occasionally catch on of their eyes and thumbs up or thumbs down. It was kind of 50/50 with one draw. None of the men 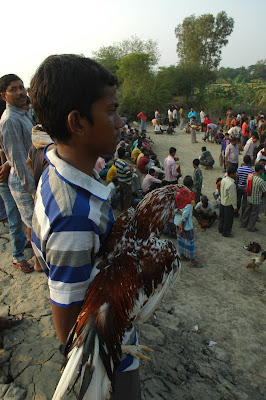 seemed to be angry with the second place roosters, no carrying by their feet or wings. Instead snugly against their chest and gentle scratching around the neck area. This made me feel better about the earlier spectacle.

When the group returned, they had been going up tight estuaries. Maybe I should have gone, but I would have missed the chickens going home to roost.

Next was the obligatory local musicians, followed by dinner, followed by a starlit paddle. I gave the musicians a try and then quit following and decided to call it a day.

Email ThisBlogThis!Share to TwitterShare to FacebookShare to Pinterest
Location: Sundarbans