I ad some good times and saw some spectacular sights but nothing has really changed my outlook from my past visit. If you want to survive you have to watch out for yourself and only think of yourself at all times and I don't find that a manner I like to find myself in.

This morning I slept in since I needed to kill time before check in to my new hotel. I had an appointment with yesterday's taxi driver for 11 am. So I piddled around the room, drank a big mug of coffee, checked email and Facebook at a nice leisurely pace. Over breakfast I wrote a review of the hotel, it was mixed. Room good this time, staff not so much.

At check out I knew I should have gotten the price in writing that the 'duty manager' quoted me. He said a price including taxes. I though this was an odd price, since with taxes the price increases by at least 20%. At check out, the taxes were included. There was no negotiation and no time since the taxi was waiting. I had her exchange a Benjamin for Rupees and later I discovered one of the 500's had a burnt corner which made it a near ten dollar souvenir. I've tried to pass it three times and failed 3 times. I'll give it to Kalwath back home, he's pretty crafty. He'll get rid of it next time he goes to India. 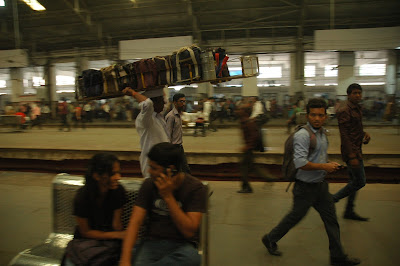 First stop was Churchgate station. This is where I went to on that first Sunday only to find out that people don't eat lunch on Sunday. Well today is a Wednesday and people apparently do eat lunch on Wednesdays. A rain pulls in and people explode from the doors and flood the platform. Then the porters and Dabawallahs. The Dabawallahs are unique to Mumbai, and so the rest of the world. For 150 Rupees (about $2.50) a Dabawallah will stop by your home in suburbia and pick up a home cooked meal for you. When I say home cooked, I mean – your – home. Mama or wifey cooked up a warm fresh meal and put it into Tiffin tins. Think of Tiffin tins as stack able, seal able metal Tupperware. Some of the 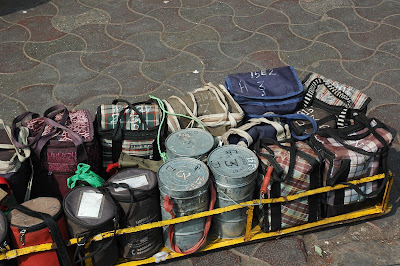 tins are wrapped in insulated bags and some are not. The neighborhood Dabawallah takes his load to the train where another Wallah takes over and puts the tins on a long wooden stretcher affair. At the station he toss this board with twenty, thirty maybe more tins on his head and dashes outside where the tins are sorted into geographic areas. Then taken to a different location where they are again separated and tied to bicycles and delivered directly to your office. I don't know if they return the Tiffins or not and my waiter's English is not that strong. What is most remarkable about this process is that only one in a hundred thousand? Million? Go astray. All this with a bunch of minimally educated men and some bicycles.

I shot a lot of photos of this process, me and my closest other tourist friends. The only think on this tip that I shot more were hotel rooms for TripAdvisor.com. Hopefully one of the pictures tells the story well.

Next stop was Crawford Market. A market place still in heavy daily use that was there in Rudyard Kipling's fathers time. After crossing the street and doing a good job of not pee'ing myself I came to the gate. I was about to enter when this small man points to a sign.

The little guy shows me his metal porter's license and tells me e has to go with me. I know the sign means don't pick up hitchhikers who will carry your bags. Use the honest licensed human tote bags. I was too beat down and too close to leaving the dust of India in India to fight it. 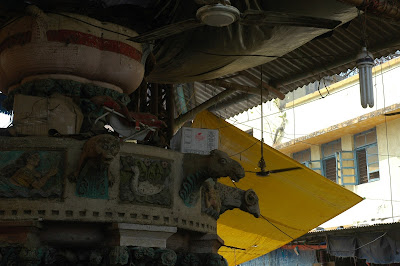 developing countries is the licensed ones have a card, and the hangers on are honest about steering you to their favorite shops. It was a tour given by Captain Obvious. “Here are some apples, that pomegranate”. “You want to see bird market?” as were are standing next a cage of Budgies, across the aisle from a pen of chickens, bunnies and a couple kittens. Jewelry? Silk? Pashmina? Spice? I did get to see the fountain that Mister Kipling Senior designed. Full of whimsy and mirth with almost cartoon like animal heads ringing the fountain. I can see the inspiration his son got for the Jungle Book.

Then came the walk past the spice seller. I was directed to this particular one, like a cow to a killing chute. I was persuaded (I won't say forced, but there really wasn't an option.) to smell 92 Masala with 92 spices in it. Saffron that was packaged in little plastic boxes that smelled like plastic boxes. Tea better than could be found in Darjeeling. I escaped with my cash and credit card intact.

I slipped my gnome a few Rupees and he slipped away. I dodged traffic and survived back to the taxi.

Next stop the J.W. Marriott at the airport. Past the undercarriage mirror check and the sniffing dog into the welcoming arms of a 5 star plus hotel. They couldn't find my reservation. I had it saved on my iPhone and showed it to him. He said it was the Courtyard by Marriott, not the J.W. I didn't care what it cost, how much for a room and can you call the Courtyard and cancel it for me? Click-click-click. I am sorry ma'am we are oversold by five already. We are fully booked.

I had a chance to have a nice chat with the bell boy while I waited for another taxi. Dad recently passed away from a heart attack. Mom was a caregiver in Israel until dad died and she had to come back to India. He used to work at the Holiday Inn and got a place in the new J.W. when they opened in March. A much better gig, and $225 a month.

The Courtyard is a bit further from the airport that I had hoped, but still far closer than down town. It is now 5 pm, think I'll go pull some curtains and set the alarm for 10pm.

Posted by Dorothy Macaw at 3:59 AM