Over dinner I wrote reviews for TripAdvisor on the two previous hotels. I couldn't find a place to review the Sunderbans excursion and residence. One had no hot water, one had 2.5 gallons of hot water at a time and one had lots of hot water, but you needed a snowsuit to eat there. Now the Radisson Blu. Lots of everything that was missing on each of the last and more, plus my ass is getting slightly chapped from all the kissing.

At dinner I tried to order the Tomato Mozzarella, Basil salad. It seemed the safest bet. Ever since one salad in Ethiopia I really have shied away from leafy vegetables. The salad was not available. That was totally unexpected. So I gritted my teeth, girded my loins and checked my Imodium and ordered the Caesar Salad. Other than it not being Romaine lettuce, but Iceberg instead It wasn't too bad. In any respect.

I've had the sniffles for a while not. Not sure if it is Rhino-virus (sp?)a cold)) or allergies. I am leaning towards allergies though. My nose runs like a faucet in my room. Yesterday I left 50 Rupees in the handle of my coffee cup for the maid, about a dollar. When I returned there was a new coffee cup (I hope), the 50 was gone and the daily newspaper was on the counter. The room hadn't been touched otherwise.

The housekeeper came in later and I asked her if she had come in earlier and replaced he cup and picked up the 50. She said she hadn't. I started thinking, it was probably the guy who checks the mini bar.. Sucker took the money due the maid. Okay. I handed the maid a 100 and thanked her, and left so she didn't have me hovering over her shoulder while she cleaned.

When I came back there was a really nice towel Elephant on the bed. Everything of mine had a towel under it. I had 3 not 2 bottles of water and one was at bedside with a glass. There were flowers on the towels in the bathroom, my brushes were on a hand towel and that was lined with flower petals. There was a large yellow blossom on my India guidebook. – I wonder if those flowers are what is making me sneeze in the room.

Today when I left I did not leave a 50 in the coffee cup's handle. When I returned the room had been untouched, except the newspaper was on the counter. The dirty coffee cup was still there, the wrappers for the Starbucks Instant and sugar were still there. You see, I think I outfoxed him. This time I drew a happy face on a piece of note paper, put the 100 on that and put that under my pillow. It was out of greedy harm's way and left no doubt that I just didn't leave the money laying around.

Today was another tourist day. The hotel rented me a car and driver. I had spoken to the concierge yesterday and told him what I wanted. He said he could call a taxi for me, but the driver would just do that – drive. If I used one of the hotel's cars and drivers they would know the area I wanted to explore and I'd get a better time. It might cost little more but a better experience.

Shortly after nine the white van with the words Radisson Blu stenciled on the side was waiting. I was not too thrilled with this, let's drive out in the countryside and advertise that I am staying at a hotel that costs 3 months salary a day. (really). Why couldn't we have had a little white clean car without the logo? Today's driver was just regular insane. No big chances and minimal amount of horn work.

This area is much more what I was used to in Cambodia and Bangladesh. Lots of wide leafed banana plants and palms. More the machete and pith helmet type of jungle than the open Savannah most of India had shown me so far. We even passed an elephant on the way. Right there on the shoulder of the road, while cars and trucks sped by with horns screaming. The Mahout was on his back and the elephant was calmly pulling branches down to munch on.

The town I was to visit was well known for it's silk manufacturing. For some reason the silkworms of Assam's product was of a golden color instead of the regular white that we associate with silk.

We got to the town in about 35 minutes. It was fifteen before 10, so most everything was still shuttered. The driver pulled to the shoulder, turned the engine off and waggled his head, as if to say “Here we are”. We were on the town's main street lined with closed shops. Hmmm.. I was getting the feeling that the concierge did not follow through on getting someone who knew his way around this town. I looked at him and said “Silk factory?” 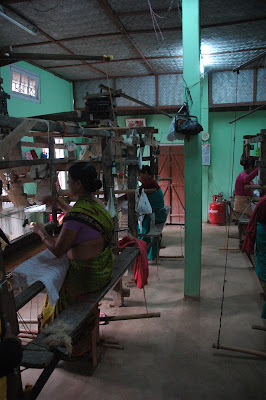 He looked at me as if to say, “Huh! Good idea, glad you thought of it!”. He then pulled out his phone and made a phone call. Kind of a long call. Ten he was back the motor was running and we were on a dirt road through the backstreets of the town. Bouncing over potholes and dodging, kids, chickens, ducks and the occasional cow we pulled up in front of a small house with the name of the silk factory over the gate. Obviously this was not quite the industrial sized factory I had expected. It was a large mom and pop operation. In the front yard under a blue tarp was an area the size of my living room covered in silk coccoons. Next he walked us to the place where an Auntie was boiling the cocoons in a medium sized wok. The was then pulling one out and winding the thin hairlike fiber onto a spool.

Then he escorted us to the loom area. The room was not well lit. Not gloomy, just lit by the small windows at the top of the walls. Four women sat operating the looms. All peddle and shuttle, nothing electric in the room except for the fans. The loons were putting out some very intricate designs. The software for these were wooden panels about the size of a small notebook with holes drilled into them I different patterns. They were linked together perhaps twenty to thirty feet long. It first one was inserted, and worked until the last one was done, then the first one was picked up and fed back into the loom and the whole process started anew. 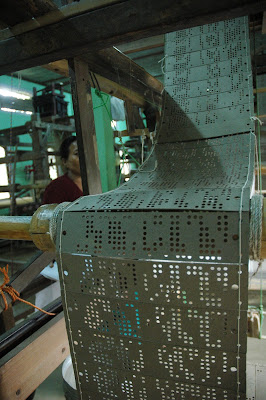 o spools for sale and export.

I thanked him for the tour and offered some money “for the children” and was told it was unnecessary, and he was firm with that.

We drove out and when we hit the main street I pointed to the nearest silk shop and my driver pointed down the road to a different one. There we found the manager of the silk factory, who had ridden over on his motor scooter. The fabric was really nice, all packaged up in three pieces of cloth. Each piece of cloth enough for one garment. Top, shirt and pants (probably not American sizes). They were sod as a bundle and could not, would not be broken down for individual sale. I made a purchase of the plain silk with a design on each end. It should be enough for a sleeveless shell.

We got back in the van and the driver said “Hotel?”. I said “There must be more to see out here, what do you suggest?”. He didn't understand a single word, he just smiled. Ookkkaayyy ……. “Show me an Elephant!”. I got that there were no elephants out here. “Okay, hotel.”

You know when you rent a horse from a stable for a joy ride, how the horse plods along, trying to rub you off on the trees ? Then as soon as you turn around, suddenly the horse is alert and prancing ? That was the feeling I had with this driver. We suddenly didn't have a single obstacle in out way on the way back. Like water down a river we flowed through and around traffic. We passed a stand of trees and the driver pointed and said “Elephant.” and kept on driving I said “Let's go see.”. He kept driving. I said “Turn around!” He looked at me, with again that, “Wow ! What an idea”, look. 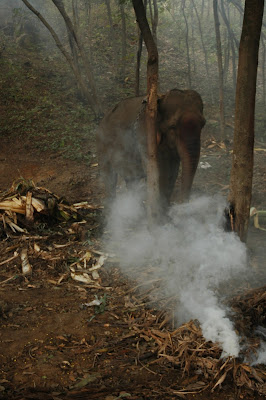 This wasn't your clean and pretty circus elephant. Not on of those with colored chalk designs on them for the tourists to ride. This was a dirty, working animal. Dirt on his face from lifting logs and branches. I took a few photos and tried to communicate with the men around, they were all ready to make the elephant do what it did best, but I told them to let the creature rest. At least we got that much across.

The rest of the drive was straight back to the hotel, no deviation.

When we got back I went up to my room and made reservations for a flight from here back to Mumbai tomorrow. There are a few places left to explore around the city, and I've done as much locally as I can here. I logged onto IndiGo to get the reservation and go to the payment part and my credit cards were where I was expecting them. I didn't think they had been stolen, but I searched all the pockets and places I could think of. I took each piece of luggage and dumped it o the bed and went through each piece Finally I found the pouch in the bottom of my camera bag. Why I put it there I have no idea. I then realized I have enough cash to make it through the rest of the trip and then some, but without credit cards, hotel reservations and plane reservations would be nearly impossible without the help of a travel agent. Aarrgghh.

It is now two in the afternoon. A little earlier than I had hoped. I'll arrange things in my luggage for the trip tomorrow I guess.

Posted by Dorothy Macaw at 3:54 AM