Too fat, too hot, too many steps

My last full day before heading home. Tomorrow is a 24 hour day, but the flight leaves at 2:30am and I plan on taking it light and easy in the afternoon. Pack my luggage in the taxi, go to Churchgate Station and catch the Tiffin Wallahs, take a look at Crawford market and then head to the Marriott for the evening and checking out a little before the witching hour. Since it is only 10 minutes from the airport an ideal place to pre-plane.

Today started at the crack of 7:30. I had expected to be up before that, so I didn't set an alarm. I had an 8:30 date with a taxi to go caving. I got showered and everything in record time, made it downstairs for breakfast and was on the front steps by eight twenty.

I had made arrangements last eve for a taxi to drive me out here, about 25 miles from city center. About a 2 hour drive. The traffic was pretty light going out, but looking at the traffic going in it was the morning rush hour, times 2.

After the airport my eyes were seeing virgin territory. It was all new to me. Not much new from the rest of the roadway I'd been looking at for the past two weeks. But a change is a change. Then we were pulling under an archway announcing a national park. This wasn't the place. We were still in the city. Surrounded by apartments and shops.

Seems I was incorrect.. This was the place. Right smack dad in the middle of the city sat this huge park, not Central Park huge, New York city huge. As soon as the taxi stopped there was a guy at the open car window telling me all the wonders to be seen from the comfort of his vehicle. I vetoed the tiger zoo and the Gandhi memorial for the Jain Temple and the caves.

Then the wait. As quick as he was to leap through the window, he made up for it with tortoise slowness in getting the car to the gate. The car needed to get gassed up first. Like, Duh! They didn't know that it might need gas for the day? I read every sign the gateway had to offer, that were in English. Memorized the map (Not To Scale) of the park. As I ran out of things to read the vehicle arrived. A small something or other. With doors made out of Coke cans and an engine that rattled and shook if we got over 20 miles and hour. With my knees under my chin and nose pressed close to the windshield we drove to the Jain Temple.

The only thing I remember from World's Religion class in college is that the Jain's are a gentle form of Buddhism and the extreme faction of them have been known to walk with a broom and sweep as they walk. This is so that they don't inadvertently step on an insect.

As with all temples the rules for this one were no shoes, socks okay. A tall spire greeted you on entering the grounds, with glass frames covering 4 inset carvings. It was made out of rock and why the carvings needed the additional protection was beyond my ken. With shoes off I climbed the steps to a large open marble floored area. There were three people worshiping at the time I was there. One woman in the center of the floor facing the three tall statues of nude men. It didn’t appear that they were cold.

The other two worshipers were off to the left under a covered area in the shade. A grandmother o 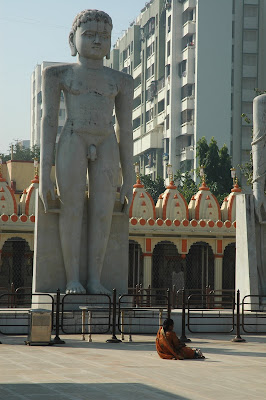 r great grandmother type and a young man in his twenty’s. I was about to take a picture of the Tres Penes, with the men attached when the grandmother “Tsk!”ed me and waggled her finger. I didn’t remember seeing any No Photos signs, but I could have missed it. The young man said I could take all the pictures I wanted. I wanted one.

Further on were Buddha upon Buddha upon Buddha. Each had his own niche and each looked to my untrained eye to be exactly the same as the previous one. Buddha on a pedestal with some Sanskrit and a golden circle under him. Each worshiper would walk past the Buddha's in order, make a quick bow. More a exaggerated head bob while moving on to the next one without stopping, slowing or breaking stride. I lost count at 25. Then suddenly near the end of the line of Buddha's was a break. Instead of white, white marble (or plaster) there was a solid black one and his one had a fan of what I thought were feathers behind his head (I found out later it represented Buddha's enlightenment under the Bodhi tree). This statue had silver (well shiny) cups and bowls set before it. The nodding Buddhists might have nodded a centimeter deeper when they passed this one.

I saw a couple other shrines off to the side, in among some greenery that I thought might hold some photographic interest so I whipped the lens cover ff and glanced over my shoulder for grand mother and fired two or three pictures in quick succession.

Back to the car where I pulled the door a little harder than necessary (muscle memory told me that car doors should weigh so much) and nearly flipped us over. We then drove back to the main gate of the park. I hope to Hell he isn't going to try to charge me for this, because the cps will be involved before I do. Then I notice a lone white female walking towards the car with Mr. Window. She pops into the backseat, the engine complains and we are off to I hope the caves.

We drive through verdant forest, and I occurs to me that the map at the gate was absolutely, completely not to scale. What was a two minute drive, became a 10 minute trip. In the trip we exchanged the usual traveler requirements, residence, occupation, reason for travel and length of stay. She was from J'berg South Africa, an architect by training and strategic planing by employment. Two weeks in India on a yoga retreat and departing tomorrow. I liked her, she seemed a traveler that too it as it came. I did ask what she was charged and she said 800. She said the guy said 800 and she took it. That disappointed me a little, bargaining is one of my favorite tourist way to pass the time, and she took the first price offered ?

We got to the caves, to pay an additional fee to enter the cave area, plus 30 cents more for my camera. Cell phones with cameras are not cameras, I gather. The caves were used by Buddhist monks in the monsoon season, when it was generally impassable to move around the countryside in the 7th and 8 th centuries. The guide book said there were five or six significant caves, the first three among them. 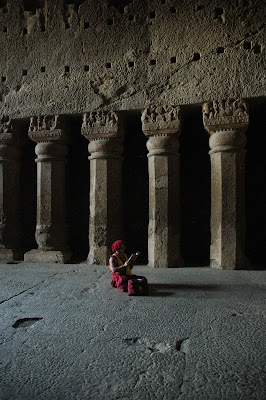 One of the caves reminded me more of the Anasazi cliff dwellings of the American southwest, the others if they had the cross instead of the Buddhas could have been dumped in the middle of Turkey and been totally at home. Some way with hand tools they were carved out of (the guard said Basalt) it looked to me ore an amalgamation of rocks pressed together, but picking at it with my thumb nail was impossible. One of the early cave temples was staffed with a security officer who explained some of the tinge and pointed out small things that I would have overlooked. I slipped him a buck and he was ready to give us a tour of the entire complex. Our tin can pilot had given us and hours deadline, so we declined the offer of a personal guided tour.

As soon as we left the shelter of the first three caves the sun was at it's near apex and there was no shade. The steps were cut into the rocks at some odd heights and depths. The depths might work well with bare monk feet, with modern hiking boots the steps were not deep enough. The lasting effect from last year's fall in Bangladesh is that I do not want to repeat it. I was struggling with the heat, the climb and the lack of shade. After seeing one of the other important caves, I had had as much fun as I could stand. I told her to trek on and take her time. We'd meet at the car.

She looked around a little more, I really expected her to dig deeper into the cave system, but it was a bit overwhelming in area and the allotted hour wasn't anywhere close to what would have been necessary to do the system properly. Give me a hat, a big bottle of water and an earlier start next time.

I found the temple of Coca Cola and had just sat down before it was time to ride back. We made a stop at the Jain Temple for her to view it. She came back to the car with a shrug.

On the way back I foisted off a torn 100 that had been rejected several times by numerous vendors. I don't know what is is with a bill having rip being unusable, it wasn't like it had been taped after being torn asunder. Then the driver asked her, what she was charged 7 or 8. I waited a heartbeat before saying 700. He He, my small victory for the day.

Back as were being discharged at the gate, Mr. Window the car herder asked if we had tipped our driver. I explained the math of 800 and 700, minus 1200 equals big tip already and he backed off with out a whimper.

We took the long way home, past the Bollywood studios, sent in the hills outside of town. Past a
famous actor and director (in India) homes. Both neither as plush from the out side as I would have imagined. But neither was the billionaire’s 10 or 15 story home. For his wife, his son and himself. He probably has a nice guestroom though. She does have a little help around the house with the laundry I suppose, with 140 employees for the house alone.

Back at the hotel we agreed to meet late tomorrow morning for a sightseeing trip to Crawford Market, designed by Rudyard Kipling's daddy and a stop at Churchcrossing train station to see the Tiffin Wallahs. I think ironic is the word. When the last thing I expect to see as a tourist is the first thing I tried to see as a tourist.

Then off to the Marriott for a few hours of bliss, before flying back to the USA.