Top of the hill

It's amazing what 11 hours of sleep, a long hot shower and a Club sandwich can do for my spirits. I feel a bit like a very old song, about a letter home from camp – Hello Mudda. Hello Fadda – where the child writes how awful it is at camp for the whole song and the last line the sun comes out and everything is perfect. With the last line being “Mudda, Fadder, please disregard this letter”. So kindly disregard the previous letter. I know I should expect a low part of the trip, but still am surprised when it hits me.

After a nice breakfast that did not include any curry or cayenne I spoke with the concierge who tracked down a taxi for me and I was again on the tourist trail. A nice little white Fiat running with that little emergency spare as it's right rear tire. A guy who spoke hardly a word of English but knew the town. With instructions from the concierge we sped off at tortoise speed. This guy was absolutely sane in his driving. I felt like he just got his learners permit. Every turn was signaled, pedestrians were allowed to pass in front. Lanes were respected and not once in 3 hours did he honk the horn. I'm mentally going – Pass this truck! The oncoming drivers will pull over a bit – Go faster around this curve. Honk your horn so they know you are coming – That idiot on the left is in our way, lay on the horn ! --- I may have been paying attention to how to drive in India for my own good.

We drove through the railway center on the way to the first temple. I never saw a train, but all the houses with wire fences were using lengths of railroad track as stanchions. Talk about over kill.

The bike trishaws each and everyone has one of the three wheels that wobbles. Only one and it generally is the one that is closest to traffic. They must be the Rodney Dangerfield of vehicles and get no respect.

There was an advertisement on a pole for “Homely stay for girls”.

The first temple was at the tippy top of the tallest hill in town and it was pretty a pretty tall hill. There were a million steps leaving from the valley floor up to the temple. Please, oh, please let there be a road up there. Because if there is not, I'm not going. Not without supplemental oxygen and a defibrillator. There was a road all the way to the top, Thank, Krishna. 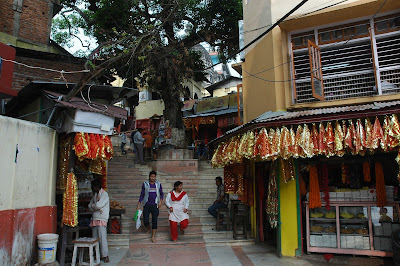 I wish I knew more about what I was seeing, because this one was interesting. Many of the big temple I've visited, here and there, would make Jesus go bonkers. You think he got grumpy with the money changers, this temple was lined for a block and a half with kiosks selling geegaws as offerings and souvenirs. Golden plastic stuff, flowers, candles, pictures for the wall and so it went. Booth after booth.

Some old hippie guru, only the real thing, gave me holy hell for stepping in the wrong spot with shoes on. I thought the demarcation for shoes vs. no shoes was marble. Guess it's concrete sometimes too. Fires and smoke, lots of fires and smoke. Some like big campfires and some small clay shot glass 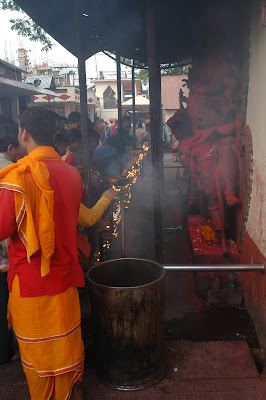 sized candles. Then there was the big fire, near what looked like a corpse sized covered object, with fresh flowers on top. That made me enough uncomfortable that I didn't need to photograph it.

Then were were all the cute baby goats, staked out here and there. I saw one guy leading a goat and the goat had all four wheels locked up and was skidding along the marble behind the man. I don't know what was going to happen to the goat, but I think the goat did.

Big baskets of pigeons were for sale. I mimed are these for eating of flying. The guy looked at me like I was a Martian. A passerby mimed the birds flying. Okay, buy the bird, give it all your troubles and set it free to fly your troubles away. Later I watched a man do exactly that. He grasped the bird in both hands tossed it high in the air, the bird flapped it's wings and flew directly back to the basket it was pulled from. I don't want to say scam, but something wasn't right with that picture.

Everyone seemed very, very happy. Lots of smiles and quite a number of people wanting to talk. In order to get to one particular, obviously popular, temple you had to enter what I can only describe as cattle chutes. 100 feet long, wide enough for two people shoulder to shoulder and completely enclosed similar to a walkway inmates might be escorted through on the way to court. Once you were in, and the door behind was actually padlocked you were stuck there cheek to jowl until the front was unlocked and you were escorted to the next waiting area. There were six of these as near as I could tell. For 50 Rupees (75 cents +/-) you could bypass the first four. In one of them as I passed the people smiles and really wave, they were so happy, it was contagious.

As I said in the beginning, I didn't understand a bit of what I was seeing but I had a good time seeing it.

Next stop was supposed to be another temple. This one involved a ferry, and from previous posts you know that ferry means here and then a small climb to the top of an island. Rough mental calculation said this was a 2 to 3 hour temple for something I wouldn't understand. I passed on this bit of fun.

To the top of another hill to the temple of the nine planets. This one didn't look like much from the outside. Newer in concrete, but not kept up very well. Of course, in this one I got latched on to by a hanger arounder who would be my guide. The temple was like a very large round bee hive, in the center were little fires around the room, each representing a different planet, with the earth and moon in the center of the room. Pluto was not represented though. I don't know who the 9th planet was. Maybe it was the L. Ron 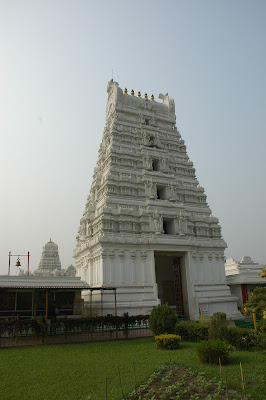 Hubbard planet that the Scientology believe in. It was so dark I the room that even with a large door to the outside, and standing in the darkness for five minutes, my eyes never did adapt enough so I could see anything other tan the fires.

The next temple we stopped at was what I think of as the Temple Of “No”. Big signs in front, No shoes of any type. Even children's sandals. No photography. If you lose your shoe ticket it will cost 20 Rupees. If you want to be blessed, Guru So-and-so will be here between 10 and 11 am and will bless you for 100 Rupees. For 350 Rupees you could approach the altar of a particular god or goddess. It was a bigger scam than the flipping pigeon.

So a little after 3 pm and back at the hotel. Think I'll look at pictures from today and figure out which ones to attach to this, maybe a slight power nap and then dinner. Life is good, today.