After a light dinner of soup and carbs I went back to the room and tried to figure out the television and cable box combination. Each required a different input from the same remote and nothing was marked in a manner that was easy for me to understand. Finally the arcane magic of the remote did get a picture and I found something in English to kill and hour.

The morning included breakfast in the hotel. It was pretty Indian and not a lot western. Everything here is spicy. I kind of like spicy, but not to the exclusion of all else. The fried potatoes were spicy, the tomato basil soup was spicy, I wouldn't be surprised if the ice cream here is spicy. There is a Jewish bakery in the New Market, hopefully not near the butchers, I might do that for breakfast tomorrow instead.

I decided that today would be my big tourist day. Hire a cab and drive around looking at things until I was sick of seeing things. Then the choices began. Air conditioned or not? I'm tough, non a/c, please. The bellman hailed a taxi on the street and started talking, then being emphatic, then yelling then – well I'm glad there wasn't a gun nearby. Te fare was expected to be one price and he was asking for double. For the double price I could have an a/c taxi that the hotel sub contracts through. Thinking about it now, I hope they didn't pull some schmoe off the street. Promise him a dollar or two to get yelled at and act indignant.

However it was, he walked and the A/C cab was called. I think they had to build the cab for as long as it seemed to get here. The cab was a newer Toyota Diesel SUV. It soon became apparent that A/C was the way to go. The traffic was horrendous and the stopped traffic sometimes left you sitting for 10 or more minutes before it moved just far enough for the light or the cop to change the direction of flow. The car came equipped with something I haven’t seen in probably 50 years. On the steering wheel was a “Suicide knob”, sometimes known as a “Necking knob”. A round ball that was attached to the rim of the wheel that the driver could one handed steer the car. I think the reason that it was called a “Necking knob” was because the driver would have one hand to steer and one arm to go around his best girl. The “Suicide” part might have had more to do with youth and no seat belts than the knob itself. They were kind of looked down upon by my parents. Only the rowdy boys used them and the rowdiest of them, their ball was an 8 Ball. Today's driver did not fit that mold.

I haven't seen the sun since I have been in Kolkata. There has been a serious fog over the entire city for the whole time. I'm not sure if it is weather related, being near the swamps or caused my pollution. Maybe it is left over from the British and their foggy London town.

In my minds eye, when I pictured Calcutta. I pictured some run down shacks with sewage running in the streets next to a river. That picture must be from another incarnation of mine. It is a huge city. Why, they even have a McDonald’s !

With the site streets not being straight, the mish mash of types of vehicles on these streets. The 12 mile drive to the first temple of the day took about an hour. The temple complex Belur Math got great reviews on TripAdvisor so it was a must see. Maybe I would have liked it better if the NO PHOTOS signs didn't keep getting in the was of my best shots. The temples were a series of temples. One main one and several smaller ones. No shoes of course. The main one was a long marble hallway with people sitting or kneeling on the floor, before a glass enclosed plaster of Paris statue surrounded by silver plates and flowers. Obviously it had more meaning than that, but that is what I saw. It was just to new and sterile for my taste.

The other temples were more of the same, except these were moostly dedicated to specific dead men and women an seemed to be either on the place or near the place where they were cremated. More cncrete, marble, plaster of Paris and silverware.

Abou not those 4 cups of coffee were making hings uncomfortable so I went in search of the loo. I found it. Nice and clean, but not Western. The squat toilets were bad enough when I was thinner, now it's a chore to get back up without touching anything. I might of pulled a muscle. Here was a price for a clean toilet though. 1 Rupee for urine and 2 for toilet. So even here it is Number 1 (Rupee) and Number 2 (Rupee).

The driver said to call him when I was ready to go, alas Sprint's i Phone doesn't work in India. So I waited and paced outside for ½ an hour until the driver came back.

The next temple was what I was expecting. Many coats of paint, some peeling, throngs of the unwashed devoted with just a hint of grime covering it all. Dakshineswar temple is great, and it even as a parking lot ! Of course more statues and flowers and silver, but here there was a long line of the faithful waiting to climb the steps an give their offering to that god (I think Kali). After they paid their respects they took one another's photo in front of the shrine, walked over to a man sitting on a chair ho put some red paste on their forehead and they dropped a couple Rupees on his table. Whether this man was a priest of what, is lost on me. He was dressed like another man you would meet on the street. 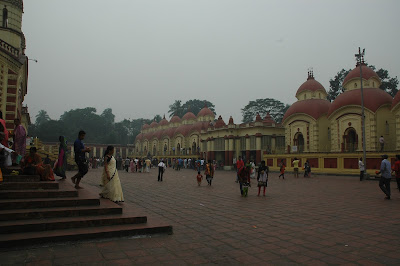 Opposite of the temple were another 10 or 12 other smaller temples across the courtyard. Each of these had a linga in the center when milk or water was poured along with the occasional flower placed. Some people were doing one and leaving, some were doing each one in order. One lady had water in a plastic gallon milk jug. She was poring some on each linga. I don't know if it was special water, or she thought the gods would think it was milk since it came from a milk jug.

The next scheduled stop was closed from noon to four and so we alternated to the Kali ghat temple at the extreme southern tip of the city. We were at the extreme northern end, of course.

By the time we got to Kali ghat temple, from which it is assumed the city got it's name (Kali = 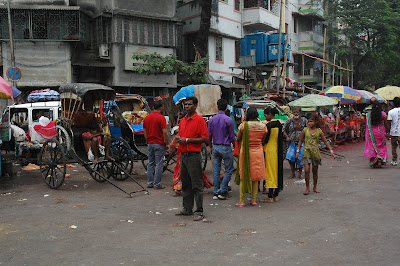 Calcutta) that a/c was feeling really good. The temple complex was crowded and smaller that the previous two, but had a much more alive vibe to it. One room had an old beat up tree that women were praying to for a child. If they did have a successful pregnancy they brought the child back on it's 21st day and show the tree what they did together.

Even with the A/C the traffic and crush of people were getting to me. A stop was planned for Victoria, a museum or something, but I opted for just photo of the exterior before saying “Uncle” (not Bob's) and begging to return to the sanctuary of my hotel for some quiet and refreshment. 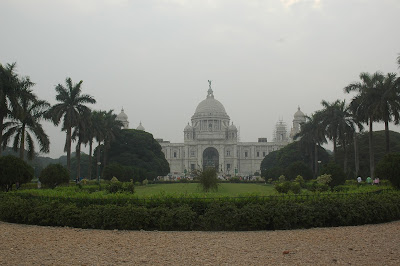 I did have two errands to attend to as well. One was to look in to a trip to the Sundrebans, where I had hoped to go last year, before my crash and burn in Bangladesh's fish market. Found the right place a couple blocks away and with some explaining from them, and crossing his palm with almost a Benjamin, I had secured two nights, single occupancy in the Sunderban mangrove swamps, all inclusive. I am not expecting a lot of comfort or luxury for that price, especially since the travel agent's office was stacked waist high in large backpacks. We shall see.

Next stop was the New Market to find a tailor to repair two blouses Well that turned into a sales trip to rival the best rug merchant in Marrakesh. Eventually I was able to get away with a $10 repair on my $8 shirts and two new shirts at about $12 each. He started out at a hundred. I thought my $12 a shirt offer would be below is price and I would skate away home free without losing face. Guess I should have gone lower.

Whew ! So that is tourism in Calcutta from my point of view. Dinner on the rooftop of Teriyaki Chicken (spicy of course) and rice, with a well deserved Fosters beer.