The party at the Mexican restaurant below my room was going full blast when I had lights out around ten thirty. I expected to toss and turn until two am. It didn’t happen that was. I had the best sleep I’d since getting to Cape Town. 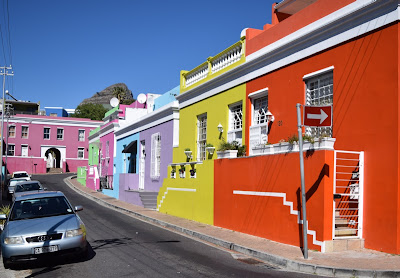 I did the morning water thing and had a mug of Starbucks instant before emerging from my room. Breakfast was included in the price of the stay. Had a croissant and coffee at a local bakery on the hotel’s dime. Checked out, caught a cab and dropped things off at me new/old hotel, before heading over t the Bo Kaap section of town. Former Muslim section of town. There is at east one and possibly two mosques that I saw. The area is known more for it multi colored homes. Every home was a different pastel and all in wonderful condition. I took several snapshots of the streets, tried to stay out of the way of other people with their camera glued to their eye and watched seventy-five percent of them shooting into the sun, not with the sun to their backs. Then they wonder why their faces are so dark and the background is so bright.

I stopped it to a small local coffee shop and had a pretty good Americano. There was one sign that grabbed my attention.

Taxis were hard to find, so I resorted to walking into a hotel and asking if they would call a cab for me. Without a blink of an eye they did and then sent security to stand with me as I waited for the car.

The driver suggested The Old Biscuit Factory. They are a weekend thing. It was not what I had expected. It was supposed to be a weekly local market. Turns out that everyone who was V&A a few days ago was at the Old Biscuit Factory today, including the Yuppie with the sweater tied around his neck. Did my best to navigate through the throngs without bumping into too many people or getting an elbow to the boobs. I needed some peace and quiet and found a small restaurant in the corner of the facility that advertised the best burger in Cape Town. I ordered it and though I have nothing to compare it to in Cape Town it was a very, very good burger. So good I took a picture of it. 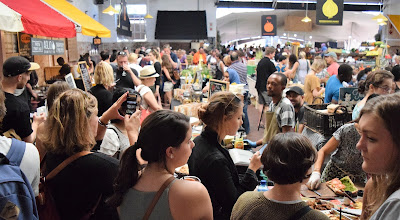 The crowds eventually overwhelmed my and I caught a taxi back to my new/old hotel. Got a room without a view of the mountain, barely larger than my previous room’s bathroom and TV viewing area, with almost no WiFi reception. Maybe I’ll take a nap and chant for something different.

Posted by Dorothy Macaw at 7:59 AM