Well that last entry ended on a low note.

The lions we saw close to camp yesterday caused a bit of a concern, so even at dusk we were required to walk to and from our tents with an escort. I feel like such a baby when I need to have someone walk me home and to dinner. Such is life here, better than staying here – inside a lion.

Dinner was more of the something we’ve had almost all of the trip, an appetizer and meat and dessert. The three wine offerings sounded good, but the one sounded great, so I chose it. The lady brought it to the table uncorked it and presented me with the cork. That had never happened before. Then she poured a taste, and it wasn’t sour. Then it dawned on me. I wasn’t drinking the normal house wine, which is good enough for me, I had just ordered a bottle of the premium stuff. Everyone at the table (except Doug) who was drinking red, got a glass of the fancy assed wine.

After dinner the entire camp’’’s employees came out and sang and dance for us. Soon it was time to get escorted back to my room. Jake was next door to me so we went with the same employee. There were two ways to our tents one more open and one more bushy. We tried to tell the guy to take us the more open way so we wouldn’t be ambushed by a cat. He’s going the bushy way and suddenly comes to the bushes and I hear him say something that sounded like “Oh, shit, bushes” We made it safely back to our tents and I locked the door and promptly went to sleep. 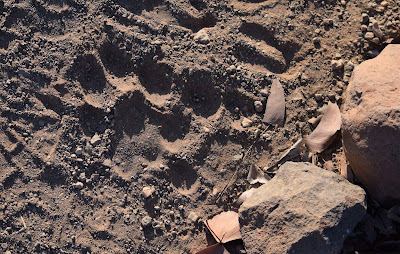 Over coffee in the morning the camp was abuzz. After dinner as clean up was going on, two or three cats walked through the camp and the staff locked themselves in. Now that was exciting, until I walked back to my room and saw lion tracks on the path near my tent and a second set between my room and Jake’s. Now it’s all fine and good to hear about cats on the other side of the camp, but next to where I was sleeping behind a piece of canvas is a totally different thing.

After breakfast, it was time to say goodbye to the trip. Jeremiah had several maps of Namibia that he yellow highlighted out route we ad taken this trip. That was a nice touch. Then into the truck with Jake, Pat and Mike for another several hour drive to the airstrip. Jake was going to a different camp and P&M were going back to Windhoek with me.

We had the plane to ourselves, so seating was absolutely perfect. Mike got a seat with windows on both sides, Pat and I got two over the wings. The pilot said to expect a few bumps on the way into Windhoek. I know both Pat and I had them on snugly, Mike likes to move around so I’m not so sure about his seat belt. As the flight went on we stated hitting some turbulence and the little plane was tossed around, but nothing too bad. Then we hit a patch and we dropped ! I hit my head on the ceiling even though I had my seat belt snug. Pat also hit her head and I found out later so did Mike. The copilot turned around and asked if we were all okay, like he could do something if we weren’t. I pulled my belt so tight I thought my legs would go numb for the remainder of the trip.

Obviously we landed without further incident. Except to a little uneasiness when I walked and Mike having a headache and a previously weakened neck we all seemed to have survived.

Pat and Mike had changed their flight to 5pm because the were told they could miss their 3pm flight. Bert changed me flight, at additional cost from the 2pm to the 6pm flight, also which I could have made. None of us were real thrilled about that.

We hung around Wilderness’ waiting area for the A/c and the Wi-Fi for most of the afternoon. Just waiting and waiting, with the occasional foray into other parts of the airport. Flight time came and we

Posted by Dorothy Macaw at 7:01 AM