Last full day in Cape Town. The plane leaves CPT about 2pm for a two hour flight to Johannesburg. Then a fifteen and a half hour flight to Atlanta and then a five hour flight to Seattle. Good gravy tomorrow is going to be long. I have the extra leg room seats from JNB to ATL, but was too late to snag the same type of seat from ATL to SEA. We’ll see what Delta can do. Maybe a different flight. Maybe I’ll get bumped.

Since it was my last full day and the weather was rreasonable I went to Robben Island. The infamous prison there Nelson Mandela was kept fr seventeen years. The boat was scheduled to depart at 11am so I left the hotel around nine to have time to relax a little and get a cup of coffee before.

I went to a restaurant on the waterfront that I ha had a nice lunch before. They advertised good coffee and I was tired of Starbucks instant and crappy hotel coffee. I got a cup and ordered a chocolate croissant. Things were going smoothly. Coffee was good, pastry was good and almost half eaten when one of those brown birds with the red tipped wings landed on my table, hopped over to my unguarded croissant grabbed it and tried to take off with the sucker ! The only thing that saved my breakfast from flying the coop was that it outweighed the bird and he had to drop it. First my iPhone and now my food. This country is full of thieves.

I strolled over to where the boat moored and waited in line with the rest of my boat. Boarding was smooth and I found a seat on the top deck with an unobstructed view. The ride was billed as forty-five minutes and was every bit of that. When I looked down on the harbor from Table Mountain I thought it was like Alcatraz and within swimming distance. It was almost seven miles from Cape Town. There was none of this smelling the chocolate factory on the island, like you could on Alcatraz.

The sea was dead calm, a slight breeze but a real pleasant trip. We did hit that deep ocean roll about half way there and I expected a few passengers to head for the railing, but everyone seemed to handle it just fine. Then from the other side of the boat was a roar. A whale had surfaced for them and as quickly dived again. Missed seeing it, but the boat was suddenly tipped to that side as everyone rushed over there in hopes of seeing it again.

The boat arrived and we disembarked and were loaded on buses for a tour of the island. It had been a military post, ship’s resupply point, leper colony, insane asylum and of course a prison. Well actually two prisons. One for common criminals and one for political prisoners. We saw two churches, a cemetery, dog kennels and stopped for a bathroom break. 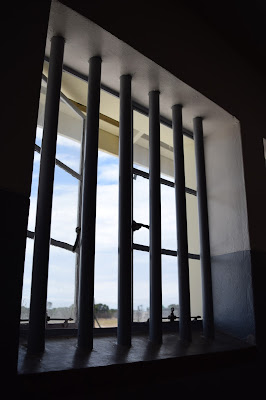 The guide was emphatic that we had fifteen minutes only. Most took sixteen, some took twenty and one couple took twenty-five. The guide made them stand up front and told them to sing their national anthem. Well either Spain doesn’t have a national anthem or this couple didn’t know it, or care that they had wasted a bus load of people’s time, because they wouldn’t sing.

Next stop we departed the bus and entered the maximum security prison itself where we were guided through the prison by a former political prisoner. The talk was held in a very echoey room and even though he did speak English I only made out about sixty percent of his talk. He explained the conditions in the prison, from visiting policy to mail censorship. From bedding to latrine usage. Of course there was the political message as well. I felt bad for the visitors who did not have English as their first language. I can only imagine how much of the talk they were able to absorb.

Then a walk through the solitary cell area and the highlight was a glimpse into Mandela's cell. Then exit to the grounds and given directions to how to walk back to the quay and get the boat.

The boat ride back was about the same as the one out, but the weather had changed. A little windier, a little cooler and a hint of rain on the horizon. We, meaning I did see two whale tails on the way back. That was exciting. I saw a Dolphin do four leaps and a small cadre of penguins in the water. A successful day all around.

Back at the wharf, I thought I’d get a nice seafood dinner on the wharf for my last dinner in town. A beautiful restaurant had an appetizing menu so I got a nice window seat. Ordered a glass of Chardonnay, a green salad and a delicious sounding seafood casserole.

The wine was good. My second glass of white wine served at room temperature here in South Africa. It must be the way it’s served here. I just spoke to the bartender here and he said white’s should be sold cold. The salad was good, chopped lettuce, bacon, sliced tomatoes and bug. Bug? Well this is Africa after all. Then I looked at said bug and it was a fucking roach !! Not a regular fly in bug but a dirty kitchen roach. If it had been alms any other bug I might have flipped him away and finished my salad. After all I have voluntary eaten a cricket in Cambodia. But a roach, sorry. That is a sign of a poorly maintained kitchen, and I think I’ll pass on consuming anything else here.

I called the waiter over, pointed out the offending critter and promptly canceled the remainder of my meal. The manager came over and didn’t charge me for the salad and comped me the wine. I told him I’d pay for the wine and he insisted. I just left.

Taxi back to the hotel and an evening in my room shuffling this and that from one piece of luggage to another getting ready for tomorrow’s departure.