Wow. Put thirty six hours between beds and a glass of wine, toss with 5,000 feet worth of elevation and you get really really tired and wall bumping. I hopped into bed at 9pm and fell asleep immediately, for three and a half hours. The remainder of the night spent tossing, dozing and turning. I had my alarm set for six thirty and must have fallen asleep at some time in the night. At one point I sensed light in the window and woke with a start. It’s got to be after 8am if it’s that light outside. Like that guy in the Christmas poem, I sprang from my bed to see what was the matter. It was five thirty in the morning. What the heck ? Then it hit me. Southern hemisphere, not North Northern Hemisphere. The heck with it, might as well stay up.

Did the morning things, checked email, took a shower, hunted down the room’s hair dryer (which was hidden deep in a desk drawer) came down for breakfast before getting ready to leave and catch a noon flight to Windhoek, Namibia.

I wended my way back to the airport this time without the required $50 guide, but once I got there could have used him again. Which terminal, A or B. Well it is an international flight it must be A ! Or not. Back the way I had come and then on to terminal B. Terminal B is the little airline terminal. The ones who can’t afford to buy the space full time. Instead they open a kiosk with their logo displayed only while the are checking in passengers, then like thieves in the night disappear. I got there about 9am for a noon flight (International give three hours before, isn’t that what they say?) We in JNB it’s two hours. They opened the check-in at exactly 10am. The line already was long, but at least it was organized. Of course it was staffed with too few employees and some of my fellow travelers were a bit grumbly. II was offered an aisle near the front or a window in the last row. I opted for the window. I was alone in a three across which I promptly traded with a couple across the aisle who had the window and the middle. That way we all got an empty middle seat and I kept a window. 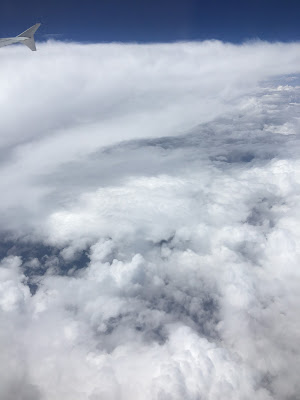 The flight was an hour and a half and included a full hot meal and beverages !! Lots of big puffy clouds and some bigger and not as fluffy clouds towering over our 38000 foot altitude. Immigration was another line that seemed long, but all in all wasn’t too bad. Exiting I saw my name in lights. Well more of a clipboard, but at least it was where I had expected it to be. Wilderness Safaris was there waiting to drive me to my hotel.

When I first heard the airport was 40 miles away from town I was surprised. Where the airport there is nothing and I mean nothing. Flat, flat, flat and not a tree in sight. Windhoek in contrast is nestled among the valley and hills and not a place you would want to land a helicopter much less an Airbus. On the way n I made small talk with the driver and asked him if he could recommend a good restaurant. He said Joe’s Beer Garden and then quickly added “You are a vegetarian are you?” I assured him I wasn’t and he then recommended the Oryx steak.

The Hill Top Guest House lives up to it’s name. After being admonished not to use too much water and then being told the water was safe to drink I was left to my room/cell. The property got good reviews on Trip Advisor and I did get the cheapest room. All downhill to get there, getting back is a different matter. It will do for two nights. I asked the owner about the restaurant and he said “Your aren’t a vegetarian are you? This country isn’t for vegetarians. It is all meat and beer.” I can hear a couple of my friends reading this and suddenly thinking of making plane reservations. 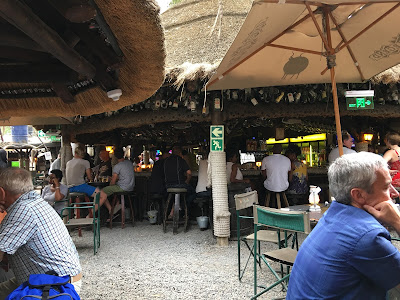 According to Lonely Planet US dollars work here pretty well. According to Namibia, South African Rand and Namibian dollars work and guess what I don’t have. I’ll have to beg a free taxi ride here to the restaurant and back, promising to pay him tomorrow and put the dinner on credit card. Once of those flush with cash that I can’t spend situations.

I don’t know how to describe this restaurant. Kind of a cross between TGI Friday’s with all the brick-a-bract on the walls and floor and Disneyland’s Tiki lounge with outdoor seating and thatched roofs and toss in communal bench table seating and you night have the idea. Maybe if I said it is Windhoek’s answer to Star Wars Cantina you might envision it. 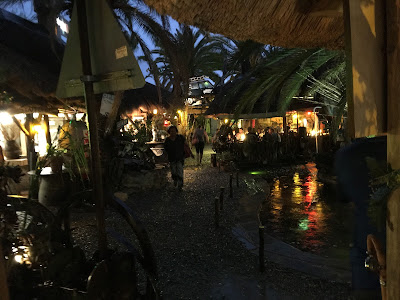 When I got there I was asked if I wanted inside or outside. Inside looked like a candle lit cavern and the outside was 80 degrees and open. Outside won. There were a few vegetarian options on the menu maybe five. The meat menu was five also, five pages. All the people I polled said go for the Oryx and it was a great choice. Medium rare still tender though without any fat. I think it was the most expensive thing on the menu. Oryx, salad, beer and a bottle of water. Twenty percent tip and I was out of there for a $25 dollar bill. Ninety percent of the way through the meal it started to rain and suddenly the outside wasn’t quite so attractive any longer. Just like the Tiki Room at Disneyland. The water dripped off the thatch and the lightning lit the sky and the thunder rocked the chairs. Unlike the Enchanted Tiki Room the thatch ended at the nape of your neck. The waiter gave me two plastic doggie bags for the computer and called the taxi and now at seven thirty I’m back in the care of Hill Top Guest House.

Posted by Dorothy Macaw at 9:27 PM