From coffee to cows

It is mid afternoon now back at the guesthouse after a morning on a city tour with last night’s taxi driver. Windhoek either is a place to visit on the way to someplace else or else don’t tourist here on a Saturday. Probably a little of both.

I turned the lights out about 9pm last night and slept well until 4am. Hey ! Seven hours? I’ll take it. I just dozed and coasted in bed until about 6am and then decided it was time for the day to face me. The room has a coffee maker similar to a Keureg except the pods are smaller and point sideways. I figured that part all well and good but I couldn’t figure out how to make coffee. It was full of water, had a pod inserted in it. Plugged into the wall and the wall switch was on and still it just stared at me. I looked for a switch and none of the buttons would wake it up. Exasperated I went to fetch technical support in the guise of the owner. Seems there is a little switch in the back of the machine that I hadn’t found I ran back to my room, teased that little switch and Bob’s your uncle – Coffee !! Not quite Starbucks but it was brown, bitter and seemed to have caffeine and when you get down to it, what more can you really ask of a cup of coffee?

Breakfast by the pool after a quick shower. It was so quick, I think I remember getting wet. Breakfast consisted of everything and more. A small patter of cheese and salami, granola and yoghurt, egg and toast with bacon and a sausage link. Coffee and fruit juice. That sounds like an offering at a buffet, but no, that is what was delivered to my table. A far cry from my bowl of cold cereal or a muffin when at home. I did my best not to offend the cook and made a pretty good dent in the meal. 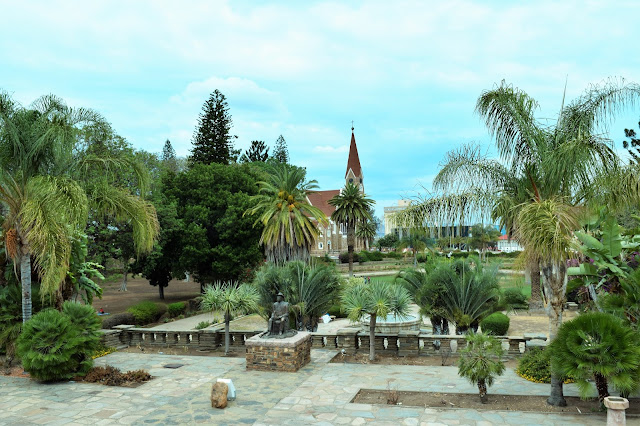 Last night’s taxi picked me up about 10am and off we went for a city tour and money exchange. First stop was the Parliament House. Where overlooking a beautiful garden he told me about the three men who’s statues predominated the entrance. All heroes in the struggle to free Namibia from it’s uninvited visitors. One chief of the Namib tribe had tried to get things closer to parity in the later 1800’s. Another leader had tried to consolidate all the tribes against the German in the early 1900’s. Finally to the man who lead the country to freedom from South Africa but died in 1990, months before freedom and self government.

I asked him for his birth year, 1978. So he would have been twelve when independence happened. I asked if he had many memories prior to independence and he told me one incident. Marshal law was in effect and travel was limited to 6am to 7pm. After that you better be off the street and snug in your homes. If not you could be shot, but more likely beat up by bands of roving white men. His father had gotten up early and gone outside to greet the morning and shave. A group of white men (I don’t know if they were soldiers, police or just plain thugs) saw him and came over and started giving him a hard time One of the men pushed him and he reacted and pushed back (maybe swung) where upon the entire group beat him to a pulp. My driver said he remembered his mom ministering to dad’s swollen and cut face. Fortunately nothing permanent in the way of physical injuries but I could tell the beating left scars among the family still.

Next stop was Christ Church, a German church built in the late 1800’s. A nice enough building. Inside one of the long walls of the nave was filled with the names of the Germans killed in the war. Which war I forgot to ask. WWI or against the peoples of Namibia or some other group or nation that the Germans thought they could bully I don’t know. I am telling you what he told me about the interior, because today the building was locked tight.

A cemetery was next. 1956 style. Then some lady had had enough of the German’s shit so she made a bomb and chucked into a passing German Military truck and cooked it from the inside. Well it really wasn’t just passing through, it was trying to control a group of demonstrators along with a bunch of their other German military friends. Their friends got a little grumpy about the whole bomb thing and decided it would be best if the entire demonstration was shot by their machine guns. Fourteen to eighteen (look it up in your history books if you really want to know) were killed on the spot and an additional forty-five were wounded. Near the front of the cemetery was a large marble area. The people who were killed in the demonstration were all laying there in a mass grave. There was a single grave next to this for a man who died the following day.

The rest of the cemetery was dotted with markers. Some carved marble and granite headstones, some flat shale rocks sitting upright with names etched in them and some just cement posts with a number set into it. Most of these markers were now marking unknowns since all the paper records were destroyed over the years.

The further out of town we went the poorer the neighborhood. He said that in the center of town up in the hills is where the rich and upper middle class live. They just drive home and put their cars in the garage and never talk to their neighbors. In the poorer it is more community and mostly it is member of a single tribe to a neighborhood (though that is changing). He said the wealthy live on the hill during the week and head back down the hill to the old tribe for some fun where you can talk to people on the weekend. 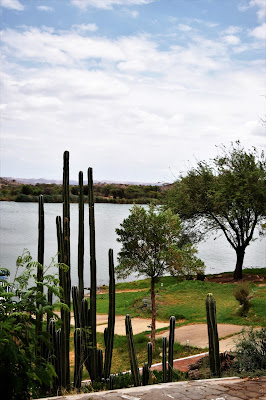 The obligatory crafts stop. A woman’s co-operative, where Batik fabric and glass beads were manufactured. The glass comes fro recycled bottles so the beads are either clear, green or brown. I guess they don’t have Milk of Magnesia, so no blue beads are made here. Of course it is always busy on a Saturday with some women demonstrating the process, except for this Saturday.

We stopped at the pool playing, meat eating market. A large covered area, guarded by children asking if they can tell you about God. Inside were mostly dry goods for sale. Dried fish, dried pulpy worms or something long and fat. Big cow patty sized dried spinach Frisbees. The belt make off in the corner with the TV and radio repair shop on the bench next to the sidewalk. Four or five pool tables all in use and one entire row of wood fired grill after grill of various cuts of beef fr take away. How do I know it was beef? Because the heads and hoofs were laying near by. Small samples of the meat were sliced thin and placed at the edge of the grill. On the counter in front of the grill was a cardboard short soda box with a pile of sale, chili pepper flakes and a pie of ground spice. Pick a piece of meat and drag it through your preferred condiment and pop in your maw. The mixed spice was the clear winner, based on the number of drag marks through it. It really was good, cooked just a hint past rare, juicy and tender. I can see why the place was packed today.

Finally the train station and museum, which – yes, you guessed it – closed. 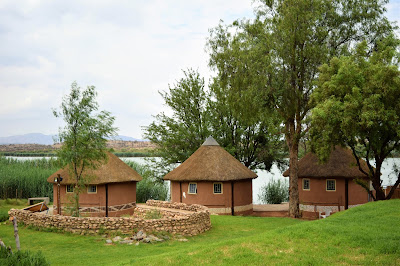 Along the way I was able to find a place to exchange a few U.S. bills for a large pile of Namibian and South African bills. So many bills that when I got back to the room I made smaller piles of cash to put here and there so I didn’t have to get a hernia when paying for things. A short nap and this and we are up to date.

Dinner at 6:30. Not sure if it will be fancy schmancy or Italian. I guess we’ll have to wait for the next entry to find out.

Posted by Dorothy Macaw at 8:07 AM