Grit in my teeth

Five thirty after a ten hour day of driving. Great to not be on the road. A nine day safari and four game drives the remainder of the trip has been either on the road or in the air. Half the group are special and so they have special needs that the rest of us have to accommodate. And people ask me why I travel alone. 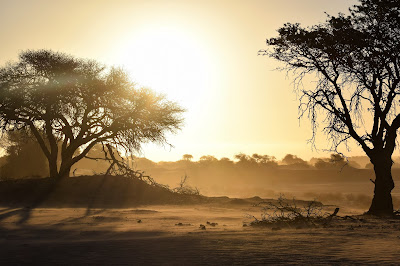 Yesterday we all met for a nosh before the Sun-downer drive. Promptly at six we all boarded the Toyota and headed out. Before leaving I looked at the anemometer readout on the wall and the wind was a steady 22 miles an hour. We drove to the riverbed to find two special trees that Jeremiah wanted t use as a backdrop for the sunset. The only problem was the wind increased and we were in the middle of a fucking sandstorm. The wind would settle a bit and then return with a vengeance. I hid in the lee the truck and still had sand in my eyes and grit in my mouth. All the while Jeremiah tried to get everyone and their camera exposed to this shit. I put the lens cap on and put it under my coat. Eventually even Jeremiah called Uncle and we went and hit in the truck and had our evening drink as the sun filtered through the blowing sand set on the day.


Dinner was dinner. Some stuff and some main stuff and some sweet stuff followed by an escorted walk back to my tent in case a lion decided to gobble me up, and went to bed after a shower.

Breakfast meeting at five thirty am, for a six departure. I set the alarm for four thirty just so I could get some time not surrounded by other people and just sip a cup of coffee and not have to make small talk. At five the walking alarm stopped by and saw I was already and at five thirty he was back.

Six am and we were on the dirt again. Down the same dry wash of yesterday. Where we saw the elephants. We ran into another group of pachyderms a young male, a female and tree immature ones. They put on a better show than yesterday. Yesterday was in the heat of the day and they were pretty much just hanging out in the shade. Today these were pulling branches the were up at trunk length. Walking around, actually being alive.

A little further down the stream bed there were giraffes and of course the Oryx’s and Springbok. The rest of the time it was drive, drive. Some nice graded roads and some off road dirt and rocks. Occasionally we would stop to see an animal and invariably they would turn away from us as soon as the cameras were raised and Captain Ass-wipe would say “Nice butt shot”

There is a game that some people play while watching the television show, Fixer Upper. Every time Jo says “Ship lap” you are supposed to take a drink. If we were playing that game with Doug and “Butt shot” I’d be too drunk to type this.

We were talking about coffee and his only input was the it was a great laxative. What a work of art that man is.

Jake is special because he is a vegetarian. Sherry and Doug are special because they are ‘No salt’ diet and must have twin beds. He also can hardly walk a half a block and that is in twenty minutes. When we arrived at camp tonight their tent was located further than mine, so I had to change tents and now I have two fucking twin beds and their welcome card, and they have either decided that they cold indeed sleep in the same bed or have had the staff go into their room and rearrange the furniture to suit them. I asked housekeeping to stick my back together when they service the room tomorrow. AND, I’ve never seen them even approach the fucking tip jar at any of the camps.

Thank heaven for Pat and Mike, they are level headed, have traveled and understand how things work. I feel like I should tip them at the end of the trip.

We are meeting at seven thirty for Rhino watching do’s and don’t’s and dinner at eight. Game drive and Rhino walking tomorrow morning. I wonder if there is a way o get a Rhino horn up someone’s ass.

Posted by Dorothy Macaw at 6:51 AM