Well got here all safe and sound. It was looking questionable in Seattle. The original plane was sick and they had to change to a smaller one. The plane was loaded to begin with and add the shrinking plane made every seat filled. I am flying on a free ticket and was fearful that I was going to be bounced. Most of us had to change seats and it was too my benefit. I went from a cattle car row to an exit row. What deal. Lots of leg room and it didn’t cost an upgrade.

As you may remember I called out a man for cutting I line in Mumbai and almost got in a physical fight with him. As we were waiting in line to get the new seat assignments a woman walked up and stepped to the front of the line. A man behind me gave me that WTF? Look and I shrugged. After thinking it over I approached her and pointed out that there was a line. Whoop ! Whoop ! Whoop ! Red alert ! Danger Will Robinson ! She went ballistic. I just put up my hands in surrender and backed away. She was small, but I think those small wiry types can be dangerous.

The flight was not too bad. A little more than four hours. A Coke and a water wanted out about hour three. I found that there was no toilet paper in the toilet and had to make due with a rough alternative. I walked to the back of the plane where the flight attendants were lounging to tell them. I woman was standing sort of blocking the aisle. I said excuse me and was informed in no uncertain terms that “there is a line for the toilet!”. My reply was “I understand” and pushed past her to alert the cabin crew of the lack of tree pulp I the toidy.

Somewhere around South Dakota and 35000 feet I had the strongest urge t have a cigarette. I haven’t smoked regularly in ears and the last flight I knew about that allowed smoking was Eastern in 1995. I have no idea where that came from.

TSA in Seattle was mostly a snap. Especially since I have the Pre-Check that came with the Global Traveler program through Homeland Security. The difference between this year and previous years is more and more tourists have paid to use precheck and now instead of business travelers, it is a mix with granny type tourists who hold up the line like they do in non-Pre-Check.

I used to hate Atlanta. In the six year since I passed though there before it really cleaned itself up. Maybe it is he International terminal and not the Domestic that makes the difference, maybe they plugged a bunch of money into he facility. It is really nice.

Hop off the plane, get on the “Plane Train” go a couple stops, hop off and there you are. He flight from ATL to JNB loaded on time and got into the sky quickly, thankfully. I had thought I was sixteen hours it was only fourteen and a half. He first four or five went by easily. The next five or six were barely tolerable. The last four were torture. Cramped even in the upgraded seat and two people away from the aisle to go pee or get up and hope to stave off DVT from sitting so long. I had been taking a low dose aspirin a week in advance to help keep the clots away.
He flight was done mostly in the dark but once the sun came up it was a really beautiful sunrise. After the sun was up for a while one of the flight attendants came by and told me to close my window shade, because other passengers were tying to sleep. Then within five minutes she and the other FA’s were waking people up for a snack and drinks. Go figure. 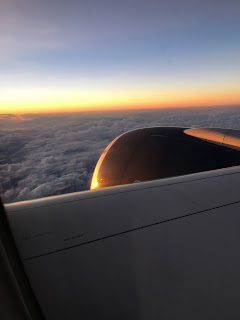 Once in JNB there was a very long line for Immigration. Two officers for two full flights. I waited patiently in line and kept my mouth shut for fear of getting I smacked by someone, based on the way my line luck had run so far this trip.

After that it was just a matter of finding my checked bag and then the hotel. The hotel is on he airport proper and maybe a five minute walk all inside if you know what you are doing. I didn’t. I asked a couple people and had a pretty good handle on how to get there, but this being a foreign country to me and me being a big fish to them I soon had a ‘helper’ who beckoned me to follow him. He got me to the hotel in good time and then asked for a tip. I had $3.00 set aside for this service. The little jackal wanted $50.00. He went away with $4.00. 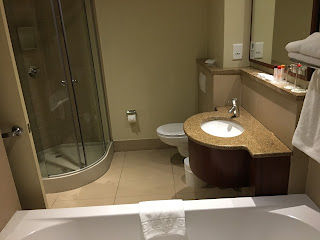 The hotel check in was smooth’ish. Te couldn’t find my reservation at first, but eventually they did. AND it wasn’t in Dorothy’s name !! Bonus. The room is nice, a bit on the smaller side, but the bathroom makes up for it. It has a shower and a separate tub along with an electric window blind between the main room and the bathroom