What I need... is a strong drink and a peer group.

We changed places since last we met. A morning plane ride from the dunes to the ocean.

After lunch I caught up on my blog and then went back to my tent to rest. I had spent most of the afternoon break on the blog, because I think slowly and type slower. So my rest time was very limited. I lay on the bed just to coast a bit before rejoining the group for the afternoon cum evening drive. (God I hope I used that word correctly!) We were not going that far this eve. Basically back to a large dune we had already seen and just park and watch the colors change as the sun set. Then a quick scoot back to the lodge.

We all loaded into the van and someone said something about seating I said “Well Jake is taking the middle seat this time” assuming that Pat was going to keep the seat she had I the morning. I had assumed your seat was yours all day. I was wrong Jake got the ‘shotgun’ seat. So far he has been a bit of a window hog, as well as being a time stealer of the groups time. My cleaver rouse failed.

The drive was easy and nonchalant with a couple stops to look at a passing Oryx or glimpse an Ostrich from afar. The dune we went to was pretty popular and already had several vehicles there. One large Toyota tourist van similar to ours but they had a table set up and seemed to be doing more drinking that watching the color change. Mike and Jake immediately disappeared with their 1000mm Canon pseudo-phallus’s and we pointing them at everything in sight. If you got near them it sounded either like a target range or paparazzi meeting.

Doug pretty much stayed in the truck and Pat, Sherry and myself hung around Jeremiah. We snapped some pictures and talked. Jeremiah took us up to the dune and had Pat pour sand over some magnets and see how they collected iron (Magnetite). He kept telling Pat to throw more sand on the magnets. I’m not sure exactly why since the point was made in a couple scoops of sand. Maybe he just liked bossing Pat around.

We sauntered back to the truck and Jeremiah pulled out the booze and the eats. The men were off “Men’ing” and we had the entire spread to ourselves. Dried fruit, nuts, sausage, meatballs. It was a great nosh. Best of all we had it all to ourselves, and men got the leftovers for a change. Vodka tonics and a beer as we watched the colors change until it was almost too dark to see and lickety split back to the lodge. By now the light of the day had gone, so Jake then offered the window seat to someone else. Whatta guy!

The tires barely stopped spinning, before we were to be back for dinner. We had enough time to pee and wash our hands. Dinner was buffet this eve except for little tiny cast iron pots of Butternut squash soup that were set on wooded holder with dents that exactly fit the legs on the pots. Maybe they weren’t dent, probably they were drilled out. The buffet was good and plenty. The conversation getting more interesting sine our tribe is slowly getting to one another to know and have some feeling of comfort with each other. 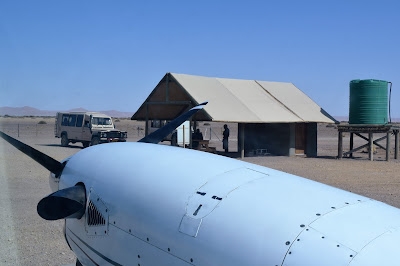 Then to bed. I stayed awake all the way to 10pm. I felt like such an adult. A 6am alarm, coffee, bread and we were packed for out next stop, the airstrip. Our flying Toyota was waiting for us. A nice twin turbo prop with low wings. The Pilot and stewardess (the co-pilot would probably dislike me calling him a stewardess. The heck with him, he’s miles away and unlikely he’ll read this anyway.) both nagged at us about safety and good manners while flying on oversized toy planes.

Fat people in the front, over the plane’s center of gravity and skinny people in the back. I had a hard time buckling my belt, but I’ll be if I’m going to sit in the fat girl’s seat. Besides who needs to breathe anyway? 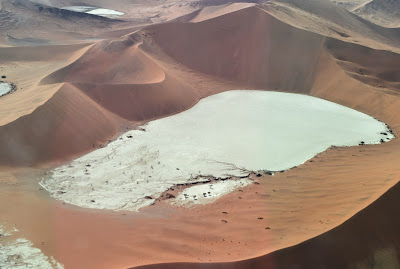 The pilot’s briefing included the sights we expected to see and that he would try and angle the aircraft in a manner so we could all get a good look at then highlights of the trip. He did a very good job of that. We popped up into the sky and in a minute he had the wing tied and we were looking down at the dead tree crater we went to yesterday. Sherry and I got to see the same thing as out intrepid dune climbers of yesterday and we got it sitting on out asses.

The plane flew over two ship wrecks, along the coast where the dunes abruptly hit the ocean. So abruptly that there wasn’t even any beach. There were a cope other things we saw but those were the things that stood out for me. One thing that did stand out was the German man sitting next to me picking his nose and not subtly either. Though it was better than listening to Doug, burp, sneeze and fart. Now there is a walking orchestra.

The pilot smoothly slipped the plane down and Terra Ffirma we were. 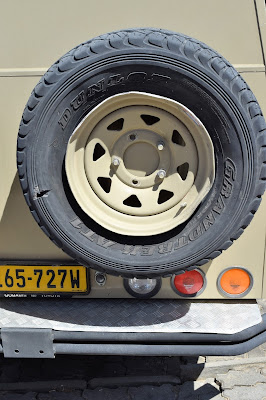 Jeremiah was waiting for us. He’d left with our big luggage at 4am to drive here. As he was driving here he had a tire puncture, which left out all the air making the tire flat on the bottom. He drove for a short distance further and added some customization to the metal rim of the tire too. He said it only took ten minutes to change, but looking to the damage to the tire it must have been close to a blowout.

The hotel was just a few minted away so Jeremiah took the long way there, explaining as much as there is about a town that is barely a hundred years old. The hotel looks pretty blah from the outside, but inside it is all old world 1900’s plush. We were given our room assignments and told to meet again in twenty minutes for lunch. I mean it had been almost two full hours since we had a sit down meal, don’tcha know?

Lunch was quite pleasant. Pat ordered Warthog Schnitzel, I wimped out and chose the Calamari. I did beg a taste of Wonder Warthog, and sure wish I had asked for it instead. It was very tasty, even it comes from such ugly critter.

After lunch Pat let me tag along on her trip to the Mineral Museum to look at pretty rocks. It was more fun and interesting than I expected. I liked it so much I even bought a couple little rocks.

It is nearing 5pm and dinner is at 7:30pm so maybe I should quit since I must be getting light headed for starvation.

Posted by Dorothy Macaw at 9:12 AM