Wake up was for five so I set the alarm for four thirty. I got going and was there when Jeremiah came to wake up. I was dressed so went out with him and looked at the stars, he pointed out the Southern Cross and then to my total surprise Orion and his famous belt. The darned moon was totally full and made it impossible to get any star trails photographed. Oh, well we have stars in the states I guess.

Breakfast was what is almost always for breakfast. Cereal, yogurt, eggs, muffins, juice. I was more interested in coffee than anything else. Had a muffin and some coffee before hitting the potty before going on the game drive.

As the name of the camp suggests, today we went in search of Rhinos. The last time I went to see the rhinos it was in Victoria Falls. We hopped in the truck and drove a mile to a guard shack. Got a guard and drove another mile, got out and walked a football field and the rhinos were so close I couldn’t get my zoom lens back far enough to get the whole rhino in the shot.

The game trackers had left about a half hour before us to find the animals. We drove for what seemed forever and stumbled across some lions on the way. A female and an adult male. The were just walking through the river bed, they didn’t seem to be hunting, though I’m sure if they found some prey that they would have munched on it.

After enough photos to satisfy National Geographic for a year we were back on the trails to find the trackers and hopefully the rhinos. Soon enough there was a lot of radio chatter and we determinedly stated driving. The roads here are trails and not always good trails, many require low range four wheel drive. The trackers white Land Cruiser was up ahead with one other Toyota truck with two guests. We were briefed to stay in line, to shut up, to keep up and whatever you do don’t run.

It was near eight thirty when we started across the veldt. I really had to watch where I stepped, once because f needing to stay in line and two because the loose rocks were real potential ankle breakers. Down a long gradual slope and then up a rise and another dip and finally up a final hill where we were hand signaled to huddle up and look down into the next dry wash. There were two rhinos on female and one two and a half year old male. Not as close as the one in Zambia, but still pretty close. These had not been habituated to people and kept a close eye on us at all times. I say eye and I mean ear. Their eye sight is not great, but they have ears that can pick up a mouse fart at half a mile. I have little doubt that the shutter clicking and mirror flopping is what drew their attention. 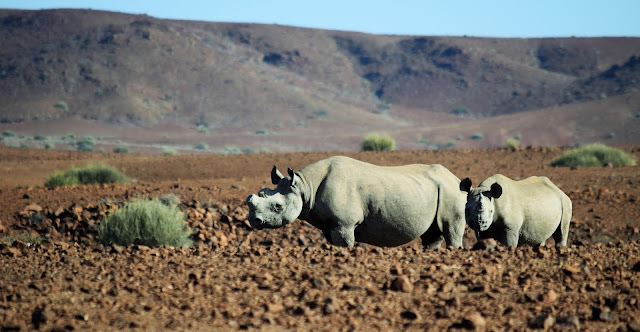 They moved a little to our left and so we slid to the left ourselves. Things were going pretty good and then the big female took a two or three steps up the hill toward us. Then is was time for all of us to step back behind the crest of the hill and head back to the trucks. It was nine am.

We had accomplished our daily task and I was hoping to return to the camp for a slow remainder of the day. I had to pee again and didn’t want to stop and find a bush again. I’d already done that once, and more today and my tummy was still not completely happy. I was over ruled. 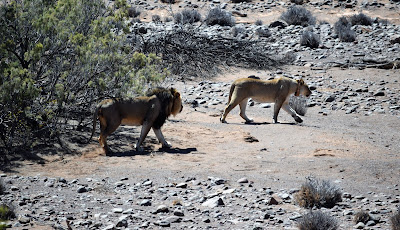 There was the ever present Oryx and then we ran into a male and a female lion resting under a large bush. Cameras came out and we sat and shot another few hundred images of probably the same lions we saw on the way to the rhinos. Eventually our shutter fingers for sore and needed a rest so we dove on until we found elephants and giraffes. The elephants had a baby with them that I saw. There was one other but it was hiding behind mom and I never saw or photographed it.

After what seemed like hours to my bladder we pulled under a tree with the other truck and the white Land Cruiser of the tackers. They had a very nice buffet set up on a table and real chairs. Lunch was good, which is something that should go unsaid as the food at Wilderness Safari’s camps is always good. Some better than others but always good. Then came the sales pitch, not the more money sales pitch, the we are doing so many wonderful things for the rhinos, elephants, lions, cheetahs, or what animal seems to be the animal of this particular camp, sales pitch. It was informative and I now know more about rhinoceroses that I ever knew before, so I guess that’s something. 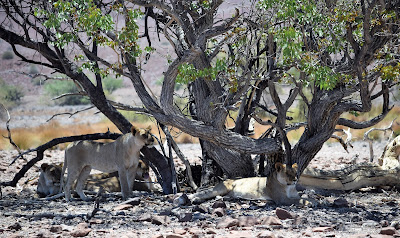 We left lunch and headed back towards camp to be distracted by five lionesses laying under a tree 1.3km from camp. They looked happy and well fed but since they were so close to camp there is no walking around without an escort after dusk for sure tonight.

Back at camp a cool washcloth and I was back in my tent. It was really how so I stripped down to my nothing and just lay on the bed. If it wasn’t for a blankity-blank fly I would have gotten a spectacular nap in. I did get a pretty good doze in though.

We met for a sundown drive and the wind was blowing, my tum-tum is not quite 100% and Doug is going on the drive. I bagged the drive. I probably missed seeing a lion kill or an elephant jumping rope but I think I’ve had enough fun for a day. Besides if I have to hear Captain Repetition say “Nice butt shot” one more time I’ll find a gun in this gunless place.

I bid everyone adieu and they all trouped to the truck. Then Doug came back and decided not to go on the sundown drive. Fuck !!

Posted by Dorothy Macaw at 6:57 AM