Second day with Wilderness Safaris. Yesterday at the crack of nine-fifteen the six passage and one drive van pulled into the driveway. All tan and all glass. Huge windows and windshield perfect for viewing the world as it passes in review. Jeremiah is the same a all Wilderness Safaris employees. I am the most special person he has ever met and doesn’t now how he lived his life this long without knowing me. That is until the next client is met. I paid fr breakfast and had my bags fetched from the room and we were on the road to find more people to fill seats.

Over breakfast I spoke fr a bit with the other single woman there. She is a tour guide, slash author, slash baby sitter slash almost anything you wanted done. She was in Windhoek to pick up a group from Poland. She was sweet and didn’t seem to be put out by my intrusion. She was studying the Latin names of some animals and attempting to convert them to Polish. Apparently not doing that very well. She had to know, because clients are always asking question even the smallest thing, and she was expected to know the answer.

We drove to the restaurant that is located next to last night’s dinner (did I write about that ??) to pick up Styrofoam containers of lunch and then to find three more people. The last two we’ll find at our first Wilderness Camp. Jake a Toronto based professional photographer and Sherry and Doug a very retired couple from Dallas. He first thing out of Doug’s mouth was “WE paid extra for twin beds. Has that been arranged for us?”. The next thing was “Did you notify the cooks on the trip that we are absolutely No Salt!?” Then there was something else about what he was expecting that was special.

Then there was Doug. Over burdened with camera equipment shooting ever fucking grain of sand, from three different angles and three different focal lengths. Always slow getting his equipment together and always the last to get back on the bus after showing Jeremiah every picture he took at that stop.

I wonder if I can get a big game permit here and pull a Dick Chaney. 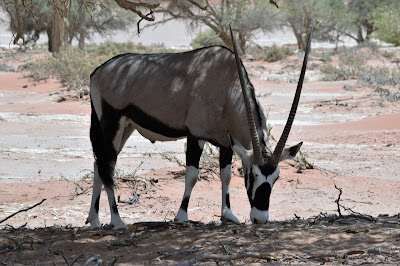 As expected Jeremiad stopped frequently and pointed out the highlights and low lights along the way. He tried to accommodate everyone on the bus. I mentioned a rock to him and after that he was pointing out every rock and explaining it’s origin. He pampered Doug and somewhat to Sherry inquiring to his health and if the ride was too cold or too hot. Jake got extra time at all the stops.

It was a long darned drive. We got on the road a little after ten thirty and didn’t get here until after seven. Where we were met with the local refreshing drink and a cool washcloth. We were sat down and met Pat and Mike (sounds like a candy). He a retired Pharmacist and the an Ecological repairman kind of Masters or PhD sort of job. They are doing fine on me scale of members of my tribe. They’ll stay on the island for a few more votings.

We had a little time before dinner to ourselves so I ordered a drink at the bar and sat down to get some peace and alone times watching over the watering hole. Not a minute later I was joined by one of the staff. Wilderness just will not let a guest to solitude they seem contractually obligated to fill any solitude with company. We had the same conversation both she and I have had dozens of times. What’s you family situation, tell me about your work, you know the words. So to change it up, I tossed in “Do you believe in God?”. I knew he would say yes because it is a way of life here. That was better than finding out about kids and the job. We ad a very heartfelt talk after that.

Dinner was something, something. Which taste really good, but I can’t remember what it was. Then the employees gathered round and sang and danced. Well he women did. He men sat in the corner and beat their ………. drums. I hope it wasn’t too much of a performance for the women They looked like they were really enjoying themselves. Dinner and dancing over and of to bed and visions of sugar plums until 5am.

I hit the sheets and was nearly asleep as soon as I was convinced that fucking mosquito was on the other side of the netting. Though I do vaguely remember hearing the jackal barking a little. I had set my hone’s alarm for four-thirty so I had time to get ready and not have to rush. I slept well for the first time this tip right up until the alarm went off. Hopefully Jet Lag is something I left in Windhoek.

Breakfast of eggs and bacon and toast and several cups of coffee got the fires lit for the day and about 6 we were in the tuck going over more miles of dirt track to see one of the reasons I came to Namibia. The dunes and pans of Sousouiti. The tall red dunes that had the dead trees in front of them but along the way we needed to stop and take pictures of other less spectacular dunes, like four times. We had to get u at 5am to get to the dunes while the light was good, and we wasted a good hour besides transit taking pictures. 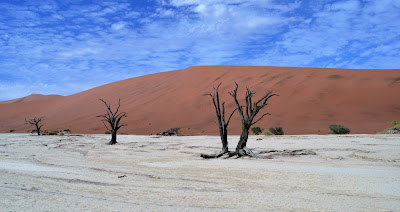 When we arrived at the dunes that had the pan and dead tees, Jeremiah gave us the option of climbing the ridge of a huge dune and then slipping down it’s face to the pan, or to walk across relative flat ground to the salt pan. Doug opted to stay wit the truck, Jake, Pat and Mike headed for the ridge. Sherry and myself along with Jeremiah shepherding us stayed on the reasonably flat route. Well it started out flat anyway. Then it became a series of short dunes that were only maybe 100 to 150 feet in height. But by this time it was getting up towards the heat of the day and climbing in sand if fucking hard, not to mention to being eligible for Social Security and more fluffy than a big fat tabby with static electricity. One time I seriously thought about abandoning the trek, but knew this was the reason I and the other 500 people came here today and probably Namibia. I crested the last dune and looked down onto the bowl shaped salt pan below. Crap ! That means if I go down I have to walk back up to get back to the truck. Okay, Bitch, get your ass down to the pan and get those pictures you want. No wimping out and going back now. 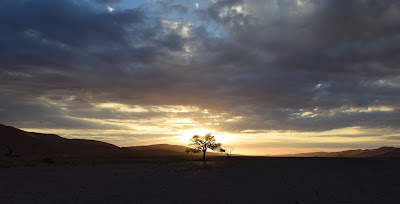 I got down and it was exactly as advertised. The dunes were a little less red and the trees were a little less black, but I do own Photoshop, well more like “borrowed” and can get the colors the way I want. I can also see most of my other four hundred fifhy friends who seemed to have a need to stand exactly in the center of the area I wanted to photograph. If I tied to wait them out to leave, new previously unknown friends would take their place. I think the photos I took are representative of what I experienced. The walk back was hotter and consequently longer. Slightly less climbing, but still a chore. I headed straight for the nearest tree to the bus, even it was next to the outhouse.

We drove back after a snack and cool drink after waiting for Jake to drag himself to the truck clicking with each step. Then back to camp with a short stop or two to capture images of critters.

The normal big communal Wilderness Safari lunch and now I do believe we are up to date.